During ancient times, the ancestors of the Vietnamese were considered to have been Proto-Austroasiatic (also called ''Proto-Mon–Khmer'') speaking people, possibly traced to the ancient Dong Son culture. Modern linguists describe Vietnamese as having lost some Proto-Austroasiatic phonological and morphological features that the original Vietnamese language had. This was noted in the linguistic separation of Vietnamese and Muong roughly one thousand years ago. From 111 BC up to the 20th century, Vietnamese literature was written in Traditional Chinese (Vietnamese: ''cổ văn'' 古文 or ''văn ngôn'' 文言), using ''Chữ Hán'' (Chinese characters) and ''chữ Nôm'' (Chinese characters adapted for vernacular Vietnamese, in beginning of the 10th century). Nom had widespread use in the 10th century, and was begun to be used as early as the 8th century in novels and poetry in Vietnamese. Nom used Chinese characters for Sino-Vietnamese vocabulary and an adapted set of characters to transcribe vernacular Vietnamese, with Vietnamese approximations of Middle Chinese pronunciations. The two concurrent scripts existed until the era of French Indochina when the Latin alphabet chữ quốc ngữ gradually became the current written medium of literature and governance. In the past, Sanskrit and Indic texts also contributed to Vietnamese literature either from the spread of religious ideas such as from Mahayana Buddhism or from historical influence and reigns of Champas and Khmers.

In Vietnamese, Chinese characters go by a variety names: * ''Chữ Hán'' (𡨸漢): "words of Hán", same meaning with ''Hán tự.'' * ''Hán tự'' (漢字): "Hán characters/words"; also pronounced as Hanzi in Standard Chinese, Hanja in Korean, and Kanji in Japanese. Meaning Chinese characters. * ''Hán văn'' (漢文): "Han script" or "Han literature", also pronounced as ''Hanwen'' in Standard Chinese, ''Hanmun'' in Korean, and ''Kanbun'' in Japanese. Meaning Classical Chinese. * ''Chữ nho'' (𡨸儒 "words of Confucians"). The Vietnamese word ''chữ'' 𡨸 (character, script, writing, letter) is derived from a Middle Chinese pronunciation of 字 (Modern Mandarin Chinese in Pinyin: zì), meaning 'character'. Sino-Vietnamese (Vietnamese: ''từ Hán Việt'' 詞漢越 "Sino-Vietnamese words") refer to cognates or terms borrowed from Chinese into the Vietnamese language, usually preserving the phonology of the original Chinese. As for syntax and vocabulary this Sino-Vietnamese language was no more different from the Chinese of Beijing than medieval English Latin was different from the Latin of Rome. Its major influence comes from Vietnamese Literary Chinese (Chữ Hán). The term Chữ Nôm (𡨸喃 "Southern characters") refers to the former transcription system for vernacular Vietnamese-language texts, written using a mixture of original Chinese characters and locally coined Nôm characters not found in Chinese to phonetically represent local Vietnamese words, meanings and their sound. However the character set for chữ Nôm is extensive, containing up to 37,000 characters, and many are both arbitrary in composition and inconsistent in pronunciation. ''Hán Nôm'' (漢喃 "Hán and chữ Nôm characters") may mean both Hán and Nôm taken together as in the research remit of Hanoi's Hán-Nôm Institute, or refer to texts which are written in a mixture of Hán and Nôm, or some Hán texts with parallel Nôm translations. There is a significant orthographic overlap between Hán and Nôm and many characters are used in both Hán and Nôm with the same reading. It may be simplest to think of Nôm as the Vietnamese extension of Han characters. The term chữ quốc ngữ ("national language script" or 𡨸國語) means Vietnamese in the romanized or transliteration script.

Chinese characters are called ''Chữ Hán'' (𡨸漢) or ''Hán tự'' (漢字, ) in Vietnamese. Possibly even a thousand years earlier, in the late first millennium BC, Yuè elites in what is now southern China may have already adopted a form of writing based on Chinese characters to record terms from their own languages. During the Chinese rule from 111 BC to 905 AD, Chinese characters had been used as the official writing of the region. Local texts written in Chinese probably also included some characters adapted to represent Proto-Viet-Mường sounds, usually personal names or Vietic toponyms that had no Chinese equivalent. According to some scholars, the adoption ''Chữ Hán'' or ''Hán tự'' had been started by Shi Xie (137–226), but many disagrewe. The first wholly vernacular Vietnamese writing transcribed in Chinese characters started in late-Tang period, around ninth century by Liêu Hữu Phương. These writings were at first indistinguishable from contemporaneous classical Chinese works produced in China, Korea or Japan. These include the first poems in Literary Chinese by the monk Khuông Việt (匡越), the ''Nam Quốc Sơn Hà'' (南國山河), and many Confucian, Daoist, and Buddhist scriptures. By 1174, Chinese characters ''Chữ Hán'' had become the official writing script of the court, mainly used by administration and literati, and continued to serve this role until mid-19th century when the traditional writing system was abolished in during French colonial rule, where the French education system which was taught in transliterated chữ quốc ngữ.

In Vietnam, Chữ Hán texts were read with the vocalization of Chinese text, similar to Chinese on-yomi in Japanese ''kanbun'' (), or the assimilated vocalizations in Korean ''hanmun'' (). This occurred alongside the diffusion of Sino-Vietnamese vocabulary into vernacular Vietnamese, and created a Sinoxenic dialect. The Sinologist Edwin G. Pulleyblank was the one of the first linguists to actively employ "Sino-Vietnamese" to recover earlier histories of China.

From the 13th century, the dominance of Chinese characters began to be challenged by ''Chữ Nôm'', a different set of writing system created based on the Chinese script to transcribe native Vietnamese words. These were even more difficult then Chinese characters themselves. Nôm script borrowed Chinese characters in their phonetic and semantic values to create new characters. Whilst designed for native Vietnamese words, Nôm required the user to have a fair knowledge of chữ Hán, and thus chữ Nôm was used primarily for literary writings by cultural elites (such as the poetry of Nguyễn Du and Hồ Xuân Hương), while almost all other official writings and documents continued to be written in classical Chinese until the 20th century. Though technically different from chữ Hán, it is simplest to think of it as a derivation of chữ Hán for vernacular Vietnamese - with modifications thereof as well as new Vietnamese-coined logograms. Together, they are called Hán Nôm. Unfortunately, the invention of this new script, although was in practice, was deemed as an inferior method of allowing mass communication and transcription of Vietnamese speech, with the Latin script often seen as the more popular method for vernacular Vietnamese.

Latin script of Vietnamese language, also called as ''Chữ quốc ngữ'' is the currently-used script. It was first developed by Portuguese missionaries in the 17th century, based on the pronunciation of Portuguese language and alphabet. For 200 years, chu quoc ngu was mainly used within the Catholic community. However, during French administration, the alphabet was further modified and then later made a part of compulsory education in 1910. Meanwhile, the use of classical Chinese and its written form chu Hán started to decline. At this time there were briefly four competing writing systems in Vietnam; chữ Hán, chữ Nôm, chữ quốc ngữ, and French. Although the first romanized script chữ quốc ngữ newspaper, ''Gia Dinh Bao'', was founded in 1865, Vietnamese nationalists continued to use chữ Nôm until after the First World War. After French rule, chữ quốc ngữ became the favored written language of the Vietnamese independence movement. As a result of extensive education in chữ quốc ngữ, Vietnamese unversed in Chinese characters or Chinese-origin words are unable to read earlier Vietnamese texts written in Hán-Nôm. The Hán Nôm Institute is the national centre for academic research into Hán-Nôm literature. Although there have been movements to restore Hán-Nôm in Vietnam, via education in schools or usage in every day life, almost all ancient poems and literary texts have been translated to and converted to Chữ Quốc Ngữ, which makes the need for literacy in Hán-Nôm almost obsolete. However, many Vietnamese find it difficult to detach themselves from their Hán-Nôm legacy, and may still feel an intimate relationship with Chinese characters.

Sanskrit texts have often been passed over and translated to Vietnamese indirectly from Chinese texts via religious teachings from Buddhist sectors, or directly, such as from Champa and Khmer. One of the most significant landmarks still remaining to this day is the ancient Mỹ Sơn Hindu Temple which has Sanskrit and Champa inscriptions. The Võ Cạnh inscription is also the oldest Sanskrit inscription ever found in Southeast Asia, a legacy of Lâm Ấp, Champa, and Funan kingdoms. The most well-known modern Vietnamese phrase with Sanskrit phrase is from common religious Buddhist mantra नमोऽमिताभाय/ Namo Amitābhāya (Nam mô A Di Đà Phật / 南無阿彌陀佛), meaning, "Hail Buddha of Infinite Light" (translated directly from Sanskrit) or "I pay homage to the Enlightened One immeasurable" / "I turn to rely on the Enlightened One immeasurable". Additionally, many sites in Vietnam have names that are Khmer in origin, from when the land was under Funan and Chenla reign, etc. For example, ស្រុកឃ្លាំង ''Srok Khleang'' is written as Sóc Trăng in Vietnamese. There is Khmer cultural influence in Mekong Delta, Vietnam. 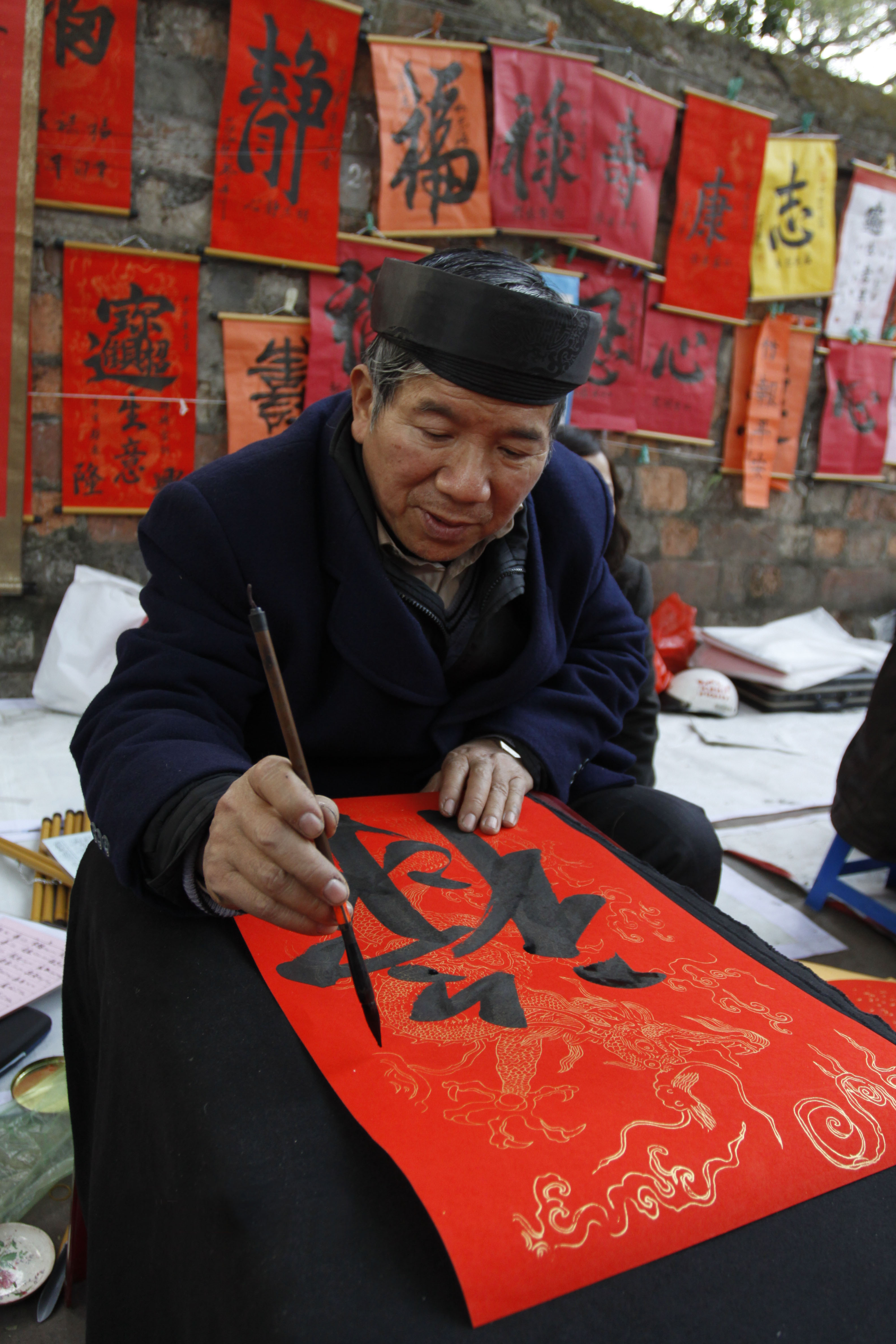 Individual ''Chữ Hán'' are still written by calligraphers for special occasions such as the Vietnamese New Year, Tết. They are still present outside Buddhist temples and are still studied for scholarly and religious purposes. With the introduction of Viet Calligraphy (Thư pháp chữ Việt) since the 1950s, Viet Calligraphy enjoys tremendous success in Vietnamese Calligraphy at the expense of ''chu han Calligraphy''. Since the mid-1990s, there has been a resurgence in the teaching of Chinese characters, both for Chữ Hán and the additional characters used in ''Chữ Nôm''. This is to enable the study of Vietnam's long history as well as cultural synthesis and unification. For linguists, the Sino-Vietnamese readings of Chinese characters provide data for the study of historical Chinese phonology and reconstruction of the Old Chinese language. Additionally, many Vietnamese may study Han characters to learn other languages such as Chinese, Japanese, and sometimes Korean. This can make it easier to study these languages due to the high concentration of Chinese-cognate words. Hence, they also end up with some measure of fluency with Hán-Nôm characters. The significance of the characters has occasionally entered western depiction of Vietnam, especially since French rule. For instance, novelist E. M. Nathanson mentions chu Hán in ''A Dirty Distant War'' (1987).

It is known that Ho Chi Minh wrote in a mixed Vietnamese Latin–Hán-Nôm script. In light of the history of Vietnamese Hán-Nôm, there have been successful movements restoring the script for transcribing native Vietnamese such as the Han Nom Revival Committee of Vietnam (委班復生漢喃越南, http://www.hannom-rcv.org/). From the Sino-Vietnamese readings, some words have ended up in common vernacular Vietnamese. For example, "nhất" (一) has come to mean "first" and "tứ" (四) has come to mean fourth in vernacular Vietnamese. Modern Vietnamese can be thought of as a romanised or transliteration rendering of common Hán-Nôm words likened to Hanyu Pinyin, that has since been used as the main medium of language in Vietnam.