In the Roman Republic and the Roman Empire, the Latin word ''castrum'' (plural ''castra'') was a building, or plot of land, used as a fortified military camp. In English, the terms 'Roman fort', 'Roman camp' and 'Roman fortress' are commonly used for ''castrum''. However, scholastic convention tends toward the use of the words 'fort', 'camp', 'marching camp' and 'fortress' as a translation of ''castrum''. ''Castrum'' was the term used for different sizes of camps including a large legionary fortress, smaller forts for Cohorts or Auxiliaries, temporary encampments, and "marching" forts. The diminutive form ''castellum'' was used for fortlets, typically occupied by a detachment of a ''cohort'' or a ''centuria''. For a list of known castra see List of castra.

''Castrum'' appears in Oscan and Umbrian, two other Italic languages, suggesting an origin at least as old as Proto-Italic language. Julius Pokorny traces a probable derivation from *k̂es-, ''schneiden'' (“cut”) in *k̂es-tro-m, ''Schneidewerkzeug'' (“cutting tool”). These Italic reflexes based on *kastrom include Oscan ''castrous'' (genitive case) and Umbrian ''castruo'', ''kastruvuf'' (accusative case). They have the same meaning, says Pokorny, as Latin ''fundus'', an estate, or tract of land. This is not any land, but is a prepared or cultivated tract, such as a farm enclosed by a fence or a wooden or stone wall of some kind. Cornelius Nepos uses Latin ''castrum'' in that sense: when Alcibiades deserts to the Persians, Pharnabazus gives him an estate (''castrum'') worth 500 talents in tax revenues. This is a change of meaning from the reflexes in other languages, which still mean some sort of knife, axe, or spear. Pokorny explains it as ''’Lager’ als ‘abgeschnittenes Stück Land’'', “a lager, as a cut-off piece of land.” If this is the civilian interpretation, the military version must be “military reservation,” a piece of land cut off from the common land around it and modified for military use. All castra must be defended by works, often no more than a stockade, for which the soldiers carried stakes, and a ditch. The ''castra'' could be prepared under attack within a hollow square or behind a battle line. Considering that the earliest military shelters were tents made of hide or cloth, and all but the most permanent bases housed the men in tents placed in quadrangles and separated by numbered streets, one ''castrum'' may well have acquired the connotation of tent.

Linguistic development of the military castra

The commonest Latin syntagmata (here phrases) for the term ''castra'' are: ; castra stativa: Permanent camp/fortresses ; castra aestiva: Summer camp/fortresses ; castra hiberna: Winter camp/fortresses ; castra navalia / castra nautica: Navy camp/fortresses In Latin the term ''castrum'' is much more frequently used as a proper name for geographical locations: e.g., Castrum Album, Castrum Inui, Castrum Novum, Castrum Truentinum, Castrum Vergium. The plural was also used as a place name, as Castra Cornelia, and from this comes the Welsh place name prefix ''caer-'' and English suffixes ''-caster'' and ''-chester''; e.g., Winchester, Lancaster. ''Castrorum Filius'', "son of the camps," was one of the names used by the emperor Caligula and then also by other emperors. ''Castro'', also derived from ''Castrum'', is a common Spanish family name as well as toponym in Italy, the Balkans and Spain and other Hispanophone countries, either by itself or in various compounds such as the World Heritage Site of Gjirokastër (earlier ''Argurokastro''). The terms ''stratopedon'' (''army camp'') and ''phrourion'' (''fortification'') were used by Greek language authors to translate ''castrum'' and ''castellum'', respectively.

A ''castrum'' was designed to house and protect the soldiers, their equipment and supplies when they were not fighting or marching. The most detailed description that survives about Roman military camps is ''De Munitionibus Castrorum'', a manuscript of 11 pages that dates most probably from the late 1st to early 2nd century AD. Regulations required a major unit in the field to retire to a properly constructed camp every day. "… as soon as they have marched into an enemy's land, they do not begin to fight until they have walled their camp about; nor is the fence they raise rashly made, or uneven; nor do they all abide ill it, nor do those that are in it take their places at random; but if it happens that the ground is uneven, it is first levelled: their camp is also four-square by measure, and carpenters are ready, in great numbers, with their tools, to erect their buildings for them." To this end a marching column ported the equipment needed to build and stock the camp in a baggage train of wagons and on the backs of the soldiers. Camps were the responsibility of engineering units to which specialists of many types belonged, officered by ''architecti'', "chief engineers", who requisitioned manual labor from the soldiers at large as required. They could throw up a camp under enemy attack in as little as a few hours. Judging from the names, they probably used a repertory of camp plans, selecting the one appropriate to the length of time a legion would spend in it: ''tertia castra'', ''quarta castra'', etc. (''a camp of three days'', ''four days'', etc.). More permanent camps were ''castra stativa'' (''standing camps''). The least permanent of these were ''castra aestiva'' or ''aestivalia'', "summer camps", in which the soldiers were housed ''sub pellibus'' or ''sub tentoriis'', "under tents". Summer was the campaign season. For the winter the soldiers retired to ''castra hiberna'' containing barracks and other buildings of more solid materials, with timber construction gradually being replaced by stone. The camp allowed the Romans to keep a rested and supplied army in the field. Neither the Celtic nor Germanic armies had this capability: they found it necessary to disperse after only a few days. The largest castra were ''legionary fortresses'' built as bases for one or more whole legions. From the time of Augustus more permanent castra with wooden or stone buildings and walls were introduced as the distant and hard-won boundaries of the expanding empire required permanent garrisons to control local and external threats from war-like tribes. Previously, legions were raised for specific military campaigns and subsequently disbanded, requiring only temporary castra. From then on many castra of various sizes were established many of which became permanent settlements.

(South Shields). Note the battlements, the Roman arches, the ''turres''.]]

From the most ancient times Roman camps were constructed according to a certain ideal pattern, formally described in two main sources, the ''De Munitionibus Castrorum'' and the works of Polybius. P. Fl. Vegetius Renatus has a small section on entrenched camps as well. The terminology varies but the basic plan is the same. The hypothesis of an Etruscan origin is a viable alternative.

thumb|Late Roman ''Quadriburgium'' in Hungary The ideal enforced a linear plan for a camp or fort: a square for camps to contain one legion or smaller unit, a rectangle for two legions, each legion being placed back-to-back with headquarters next to each other. Laying it out was a geometric exercise conducted by experienced officers called ''metatores'', who used graduated measuring rods called ''decempedae'' ("10-footers") and ''gromatici'' who used a groma, a sighting device consisting of a vertical staff with horizontal cross pieces and vertical plumb-lines. Ideally the process started in the centre of the planned camp at the site of the headquarters tent or building (principia). Streets and other features were marked with coloured pennants or rods. The street plans of various present-day cities still retain traces of a Roman camp, for example Marsala in Sicily, the ancient Lilybaeum, where the name of the main street, the Cassaro, perpetuates the name "castrum".

The Castrum's special structure also defended from attacks. The base (''munimentum'', "fortification") was placed entirely within the ''vallum'' ("wall"), which could be constructed under the protection of the legion in battle formation if necessary. The ''vallum'' was quadrangular aligned on the cardinal points of the compass. The construction crews dug a trench (''fossa''), throwing the excavated material inward, to be formed into the rampart (''agger''). On top of this a palisade of stakes (''sudes'' or ''valli'') was erected. The soldiers had to carry these stakes on the march. Over the course of time, the palisade might be replaced by a fine brick or stone wall, and the ditch serve also as a moat. A legion-sized camp always placed towers at intervals along the wall with positions between for the division artillery.

Around the inside periphery of the ''vallum'' was a clear space, the ''intervallum'', which served to catch enemy missiles, as an access route to the ''vallum'' and as a storage space for cattle (''capita'') and plunder (''praeda''). Legionaries were quartered in a peripheral zone inside the ''intervallum'', which they could rapidly cross to take up position on the ''vallum''. Inside of the legionary quarters was a peripheral road, the ''Via Sagularis'', probably a type of "service road", as the ''sagum'', a kind of cloak, was the garment of soldiers. 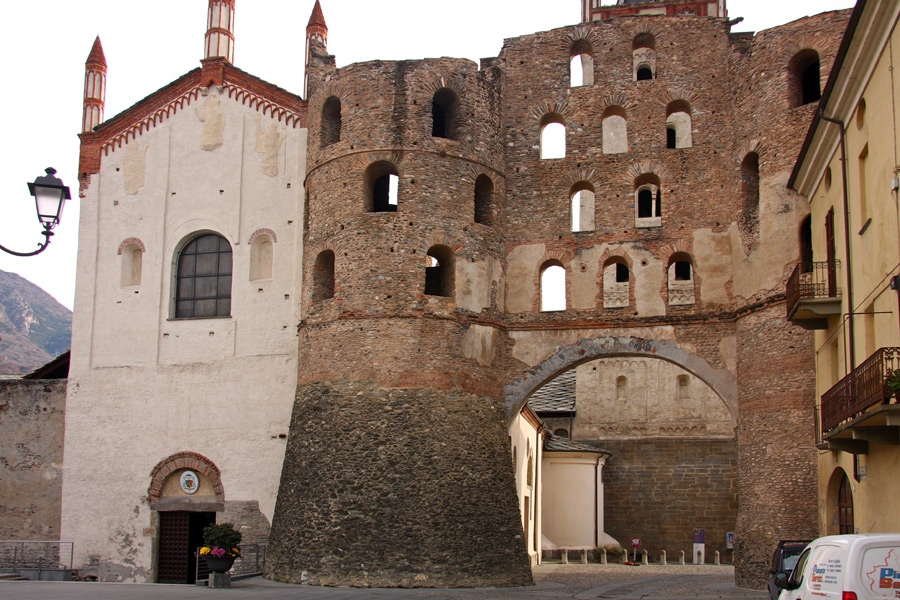 Every camp included "main street", which ran through the camp in a north-south direction and was very wide. The names of streets in many cities formerly occupied by the Romans suggest that the street was called ''cardo'' or ''cardus maximus''. This name applies more to cities than it does to ancient camps. Typically "main street" was the ''via principalis''. The central portion was used as a parade ground and headquarters area. The "headquarters" building was called the ''praetorium'' because it housed the ''praetor'' or base commander ("first officer"), and his staff. In the camp of a full legion he held the rank of ''consul'' or ''proconsul'' but officers of lesser ranks might command. On one side of the ''praetorium'' was the ''quaestorium'', the building of the ''quaestor'' (supply officer). On the other side was the ''forum'', a small duplicate of an urban forum, where public business could be conducted. Along the ''Via Principalis'' were the homes or tents of the several tribunes in front of the barracks of the units they commanded. The ''Via Principalis'' went through the ''vallum'' in the ''Porta Principalis Dextra'' ("right principal gate") and ''Porta Principalis Sinistra'' ("left, etc."), which were gates fortified with ''turres'' ("towers"). Which was on the north and which on the south depends on whether the praetorium faced east or west, which remains unknown. The central region of the ''Via Principalis'' with the buildings for the command staff was called the ''Principia'' (plural of ''principium''). It was actually a square, as across this at right angles to the ''Via Principalis'' was the ''Via Praetoria'', so called because the ''praetorium'' interrupted it. The ''Via Principalis'' and the ''Via Praetoria'' offered another division of the camp into four quarters. Across the central plaza (''principia'') to the east or west was the main gate, the ''Porta Praetoria''. Marching through it and down "headquarters street" a unit ended up in formation in front of the headquarters. The standards of the legion were located on display there, very much like the flag of modern camps. On the other side of the praetorium the ''Via Praetoria'' continued to the wall, where it went through the ''Porta Decumana''. In theory this was the back gate. Supplies were supposed to come in through it and so it was also called, descriptively, the ''Porta Quaestoria''. The term Decumana, "of the 10th", came from the arranging of ''manipuli'' or ''turmae'' from the first to the 10th, such that the 10th was near the ''intervallum'' on that side. The ''Via Praetoria'' on that side might take the name ''Via Decumana'' or the entire ''Via Praetoria'' be replaced with ''Decumanus Maximus''.

In peaceful times the camp set up a marketplace with the natives in the area. They were allowed into the camp as far as the units numbered 5 (half-way to the praetorium). There another street crossed the camp at right angles to the ''Via Decumana'', called the ''Via Quintana'', "5th street". If the camp needed more gates, one or two of the ''Porta Quintana'' were built, presumably named ''dextra'' and ''sinistra''. If the gates were not built, the ''Porta Decumana'' also became the ''Porta Quintana''. At "5th street" a public market was allowed.