A casserole (French: diminutive of ''casse'', from Provençal ''cassa'' 'pan') is a variety of a large, deep pan or bowl used for cooking a variety of dishes in the oven; it is also a category of foods cooked in such a utensil. To distinguish the two uses, the pan can be called a "casserole dish" or "casserole pan", whereas the food is simply "a casserole". The same pan is often used both for cooking and serving. 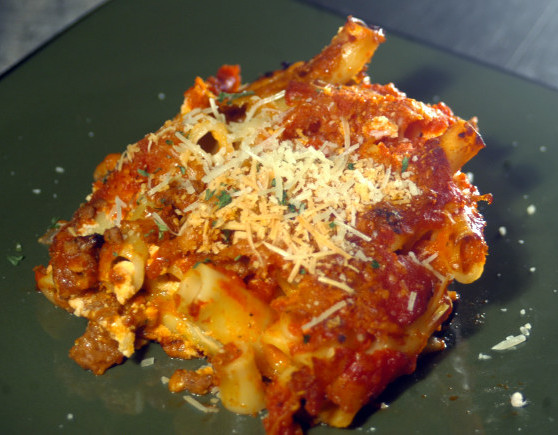 Baked dishes have existed for thousands of years. Early casserole recipes consisted of rice that was pounded, pressed, and filled with a savoury mixture of meats such as chicken or sweetbread. Some time around the 1870s this sense of casserole seems to have taken its current sense. Cooking in earthenware containers has always been common in most cultures, but the idea of casserole cooking as a one-dish meal became popular in the United States in the twentieth century, especially in the 1950s when new forms of lightweight metal and glass cookware appeared on the market. By the 1970s casseroles took on a less-than sophisticated image.

In the United States, a casserole is typically a baked food with three main components: pieces of meat (such as chicken or ground meat) or fish (such as tuna) or other protein (such as beans or tofu), various chopped vegetables, and a starchy binder (such as flour, potato or pasta); sometimes, there is also a crunchy or cheesy topping. Liquids are released from the meat and vegetables during cooking, and further liquid in the form of stock, wine, beer, gin, cider, vegetable juice, or even water may be added when the dish is assembled. Casseroles are usually cooked slowly in the oven, often uncovered. They may be served as a main course or side dish, and, conveniently, may be served in the vessel in which they were cooked.

Many baked dishes served in the baking dish can be classed as casseroles. Examples include: Lancashire hotpot (English), cassoulet (French), moussaka (Greek), shepherd's pie (UK), timballo (Italian). In English-speaking Commonwealth countries like the United Kingdom, Australia, and New Zealand, the term ''casserole'' is most commonly used to refer to a dish of meat or chicken with vegetables and a gravy-style sauce; dishes containing a large proportion of starchy ingredients, e.g. pasta or potatoes, or those cooked in creamy sauces are not generally referred to as casseroles, and might be called ‘bakes’ or ‘gratins’. In the UK, the terms casserole and stew tend to be used interchangeably, although technically stews are cooked on a stovetop while casseroles are cooked in an oven.

* – History of the casserole