Click Here for Items Related To - Casimir III the Great


Casimir III the Great ( pl|Kazimierz III Wielki; 30 April 1310 – 5 November 1370) reigned as the King of Poland from 1333 to 1370. He also later became King of Rus' in 1340, and fought to retain the title in the Galicia-Volhynia Wars. He was the third son of Władysław I the Elbow-high and Jadwiga of Kalisz, and the last Polish king from the Piast dynasty. Casimir inherited a kingdom weakened by war and made it prosperous and wealthy. He reformed the Polish army and doubled the size of the kingdom. He reformed the judicial system and introduced a legal code, gaining the title "the Polish Justinian". Casimir built extensively and founded the Jagiellonian University (back then simply called the University of Krakow), the oldest Polish university and one of the oldest in the world. He also confirmed privileges and protections previously granted to Jews and encouraged them to settle in Poland in great numbers. Casimir left no lawful male heir to his throne, producing only daughters. When he died in 1370 from an injury received while hunting, his nephew, King Louis I of Hungary, succeeded him as king of Poland in personal union with Hungary. 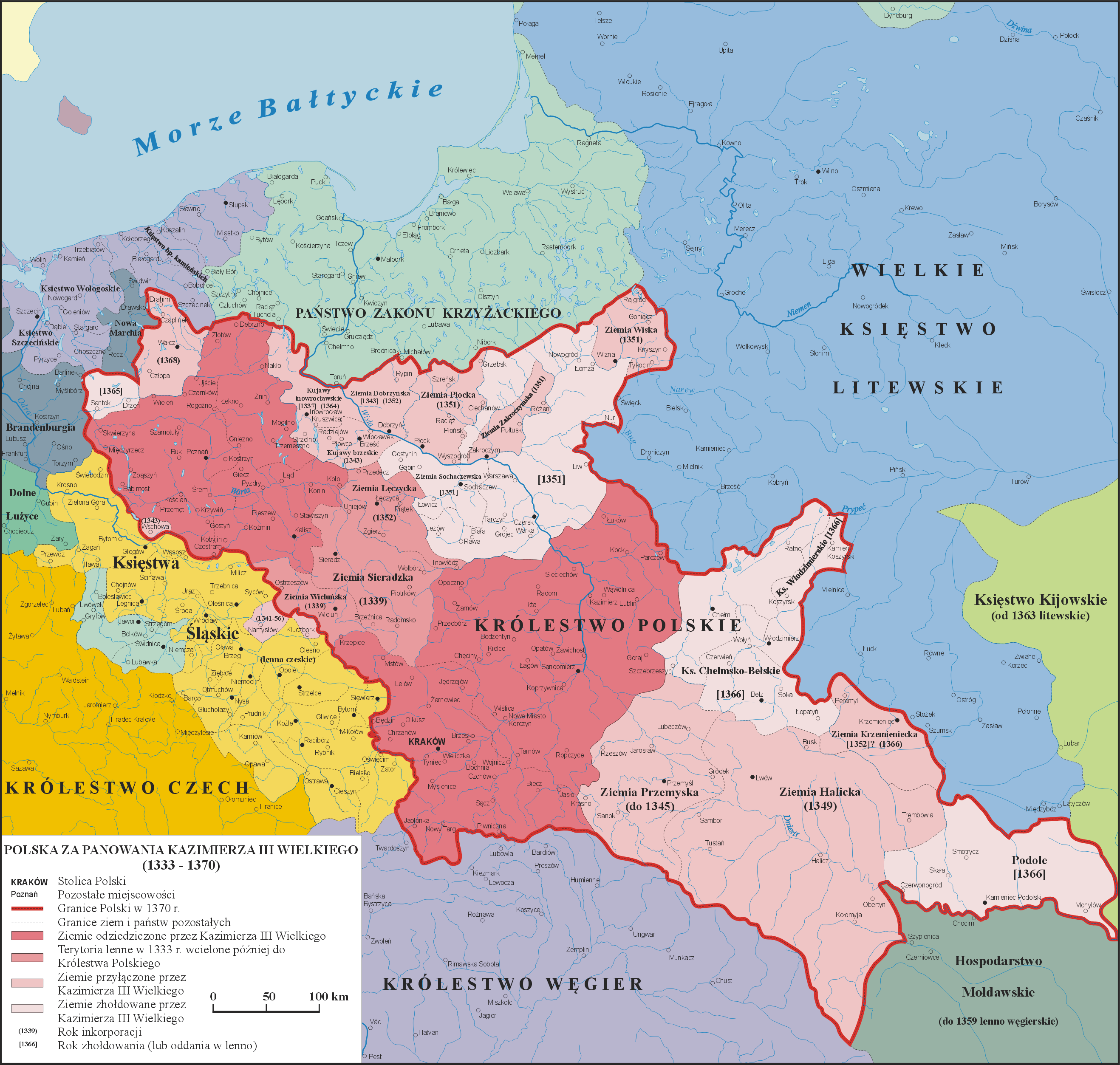 He was born on 30 April 1310 in Kowal, Kuyavia. He had two brothers who died in infancy and three sisters: Kunegunda, Elżbieta, and Jadwiga. When Casimir attained the throne in 1333, his position was in danger, as his neighbours did not recognise his title and instead called him "king of Kraków". The kingdom was depopulated and exhausted by war, and the economy was ruined. In 1335, in the Treaty of Trentschin, Casimir was forced to relinquish his claims to Silesia "in perpetuity". Casimir rebuilt the country and his kingdom became prosperous and wealthy, with great prospects for the future. He waged many victorious wars and doubled the size of the kingdom, mostly through addition of lands in modern-day Ukraine (then called the Duchy of Halych). Casimir built extensively during his reign, ordering the construction of over 40 castles, including many castles along the Trail of the Eagle's Nests, and he reformed the Polish army. At the Sejm in Wiślica, on 11 March 1347, Casimir introduced reforms to the Polish judicial system and sanctioned civil and criminal codes for Great and Lesser Poland, earning the title "the Polish Justinian". He founded the University of Kraków, the oldest Polish University, and he organized a meeting of kings in Kraków in 1364 at which he exhibited the wealth of the Polish kingdom. Casimir is the only king in Polish history to both receive and retain the title of "Great", as Bolesław I is more commonly known as "the Brave".

In 1355, in Buda, Casimir designated his nephew Louis I of Hungary as his successor should he produce no male heir, just as his father had with Charles I of Hungary to gain help against Bohemia. In exchange Casimir gained a favourable Hungarian attitude, needed in disputes with the hostile Teutonic Order and the Kingdom of Bohemia. At the time Casimir was 45 years old, and so producing a son did not seem unreasonable (he already had a few children). Casimir left no legal son, however, begetting five daughters instead. He tried to adopt his grandson, Casimir IV, Duke of Pomerania, in his last will. The child had been born to his second daughter, Elisabeth, Duchess of Pomerania, in 1351. This part of the testament was invalidated by Louis I of Hungary, however, who had traveled to Kraków quickly after Casimir died (in 1370) and bribed the nobles with future privileges. Casimir III also had a son-in-law, Louis VI of Bavaria, Margrave and Prince-elector of Brandenburg, who was considered a possible successor, but he was deemed ineligible as his wife, Casimir's daughter Cunigunde, had died in 1357 without issue. Thus King Louis I of Hungary became successor in Poland. Louis was proclaimed king upon Casimir's death in 1370, though Casimir's sister Elisabeth (Louis's mother) held much of the real power until her death in 1380.

Society under the reign of Casimir

thumb|''Wiec'' in reign of Casimir the Great Casimir was facetiously named "the Peasants' King". He introduced the codes of law of Greater and Lesser Poland as an attempt to end the overwhelming superiority of the nobility. During his reign all three major classes — the nobility, priesthood, and bourgeoisie — were more or less counterbalanced, allowing Casimir to strengthen his monarchic position. He was known for siding with the weak when the law did not protect them from nobles and clergymen. He reportedly even supported a peasant whose house had been demolished by his own mistress, after she had ordered it to be pulled down because it disturbed her enjoyment of the beautiful landscape.

On 9 October 1334, Casimir confirmed the privileges granted to Jews in 1264 by Bolesław V the Chaste. Under penalty of death, he prohibited the kidnapping of Jewish children for the purpose of enforced Christian baptism, and he inflicted heavy punishment for the desecration of Jewish cemeteries. While Jews had lived in Poland since before his reign, Casimir allowed them to settle in Poland in great numbers and protected them as ''people of the king''. Casimir's legendary Jewish mistress Esterka remains unconfirmed by direct historical evidence.

On 30 April or 16 October 1325, Casimir married Aldona of Lithuania. She was also known as Anna, possibly a baptismal name. She was a daughter of Grand Duke Gediminas of Lithuania and Jewna. They had two children: *Elisabeth of Poland (ca. 1326–1361); married Duke Bogislaus V of Pomerania *Cunigunde of Poland (1334–1357); married Louis VI the Roman, the son of Louis IV, Holy Roman Emperor Aldona died on 26 May 1339. Casimir remained a widower for two years.

On 29 September 1341, Casimir married his second wife, Adelaide of Hesse. She was a daughter of Henry II, Landgrave of Hesse, and Elizabeth of Meissen. They had no children. Casimir started living separately from Adelaide soon after the marriage. Their loveless marriage lasted until 1356, when he declared himself divorced.

After Casimir "divorced" Adelaide he married his mistress Christina Rokiczana, the widow of Miklusz Rokiczani, a wealthy merchant. Her own origins are unknown. Following the death of her first husband she had entered the court of Bohemia in Prague as a lady-in-waiting. Casimir brought her with him from Prague and convinced the abbot of the Benedictine abbey of Tyniec to marry them. The marriage was held in a secret ceremony but soon became known. Queen Adelaide renounced it as bigamous and returned to Hesse. Casimir continued living with Christine despite complaints by Pope Innocent VI on behalf of Queen Adelaide. This marriage lasted until 1363–64 when Casimir again declared himself divorced. They had no children.

In about 1365, Casimir married his fourth wife Hedwig of Żagań. She was a daughter of Henry V of Iron, Duke of Żagań and Anna of Mazovia. They had three children: *Anna of Poland, Countess of Celje (1366 – 9 June 1422); married firstly William of Celje; their only daughter was Anne of Celje, who married Jogaila of Lithuania when he was king of Poland (as Władysław II Jagiełło). Anna married secondly Ulrich, Duke of Teck; they had no children. *Kunigunde of Poland (1367 – 1370) *Jadwiga of Poland (1368 – ca. 1382) As Adelheid was still alive (and possibly Christina as well), the marriage to Hedwig was also considered bigamous. Because of this, the legitimacy of his three young daughters was disputed. Casimir managed to have Anna and Kunigunde legitimated by Pope Urban V on 5 December 1369. Jadwiga the younger was legitimated by Pope Gregory XI on 11 October 1371 (after Casimir's death).