The Capital Regional District (CRD) is a local government administrative district encompassing the southern tip of Vancouver Island and the southern Gulf Islands in the Canadian province of British Columbia. The CRD is one of several regional districts in British Columbia and had an official population of 383,360 as of the Canada 2016 Census. The CRD encompasses the thirteen municipalities of Greater Victoria and three unincorporated areas: Juan de Fuca Electoral Area on Vancouver Island, Salt Spring Island Electoral Area, and Southern Gulf Islands Electoral Area. The CRD also acts as the local government for most purposes in the Electoral Areas. CRD headquarters is in the City of Victoria, although there are many office and operational facilities throughout the region. The total land area is . The CRD was formed in 1966 as a federation of seven municipalities and five electoral areas to provide coordination of regional issues and local government in rural areas in the Greater Victoria region.

In 2016, the Capital Regional District had a population of 383,360, a 6.5% increase from 359,991 in 2011. The CRD comprises the 13 municipalities of Greater Victoria, three electoral areas and 10 Indigenous reserves. The reserves have a relatively small portion of the population with 5,244 participating in the 2016 census. Some reserves did not participate; those that did are included in the population figures of the municipality or electoral area encompassing them, however the CRD regional government and local governments have no jurisdiction over reserves. Saanich and Victoria together have over 50 percent of the region's population.

(map)
The Salt Spring Island Electoral Area of the Capital Regional District (CRD) of the Canadian province of British Columbia consists of unincorporated areas in the CRD located on Salt Spring Island. It is represented by one director on the CRD. The major localities encompassed by the electoral area are: *Ganges *Fulford Harbour *Vesuvius Bay *Long Harbour *Beaver Point *Musgrave Landing According to the Canada 2006 Census: *Population: 9,640 *% Change (2001-2006): 3.9 *Dwellings: 5,131 *Area (km².): 182.23 *Density (persons per km².): 52.9 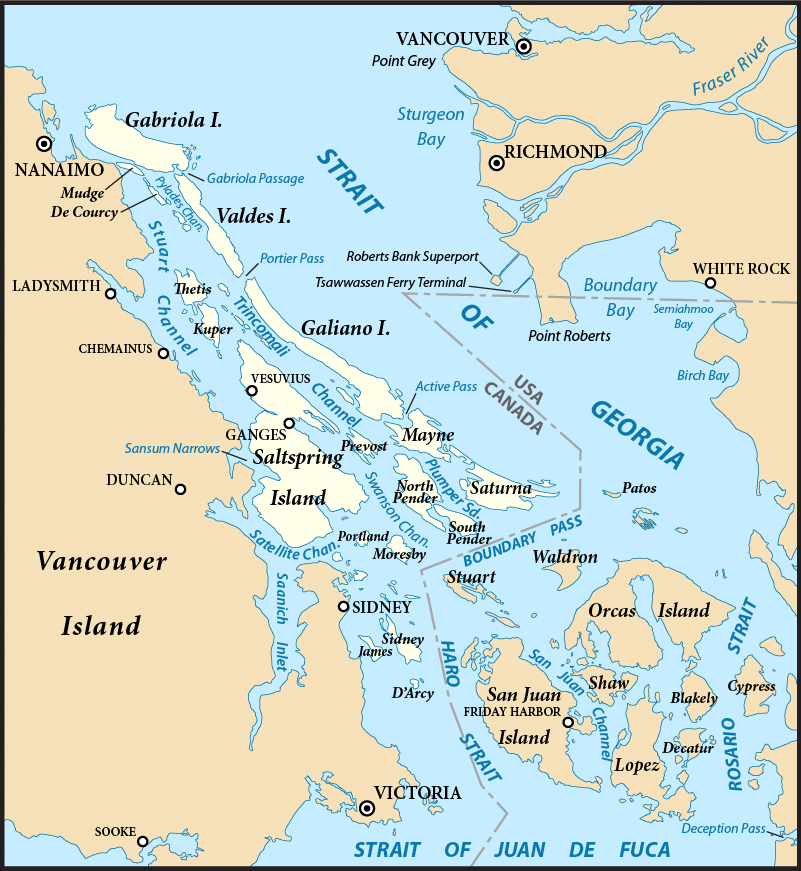 The Southern Gulf Islands Electoral Area of the Capital Regional District (CRD) of the Canadian province of British Columbia consists of unincorporated districts in the CRD located on Galiano, Saturna, Mayne, and North and South Pender Islands, as well as many smaller islands located in the Gulf of Georgia north and east of Victoria. It is previously known as the Outer Gulf Islands Electoral Area. Its population of 5,101 is represented by one director on the CRD. The major localities encompassed by the electoral area are: *Bedwell Harbour (South Pender Island) *Montague Harbour (Galiano Island) *Otter Bay (North Pender Island) *Saturna (Saturna Island) *Sturdies Bay (Galiano Island) *Village Bay (Mayne Island)

(map)
The Juan de Fuca Electoral Area is an Electoral Area of the CRD. It consists of the District's unincorporated land on Vancouver Island, including the neighbourhood of Willis Point (Greater Victoria) on the Saanich Inlet, Malahat, on the western shore of Saanich Inlet, and the Western Communities localities of East Sooke, Jordan River, Otter Point, Shirley, Port Renfrew, inclusive of the First Nations reserves of Gordon River 2 and Pacheena 1, which are within its territory. Its population of 4,484 is represented by a single director of the CRD. The total land area is 1,502.24 km² (580.0 sq mi). Population figures do not included residents of Indian Reserves, whether band members or non-indigenous persons.

The board of directors are either directly elected officials or are appointed from within the region's elected municipal councils. The CRD's responsibilities include recycling, operating the regional landfill, building and operating sewage treatment plants, a sewer source control program, regional water supply, funding for non-profit arts groups, regional planning, funding health facilities, and overseeing thirty regional parks, trails, and regional park reserves encompassing over 100 km². The CRD is the sole shareholder of the Capital Region Housing Corporation, which owns and operates over 1200 rental housing units. In certain areas, the CRD can pass bylaws that are binding on a portion of the geographical area or the entire geographical area. These include a "clean air bylaw" smoking ban in all public places and patios in restaurants/pubs. The CRD assumes responsibilities ordinarily undertaken by municipalities in unincorporated areas of the CRD. These responsibilities include animal control, building inspection, fire protection, and bylaw enforcement. Some of the region's municipalities avail themselves of some of these services in a contractual arrangement with the CRD.