Click Here for Items Related To - Capetian House of Anjou


The Capetian House of Anjou was a royal house and cadet branch of the direct French House of Capet, part of the Capetian dynasty. It is one of three separate royal houses referred to as ''Angevin'', meaning "from Anjou" in France. Founded by Charles I of Anjou, the youngest son of Louis VIII of France, the Capetian king first ruled the Kingdom of Sicily during the 13th century. Later the War of the Sicilian Vespers forced him out of the island of Sicily, leaving him with the southern half of the Italian Peninsula — the Kingdom of Naples. The house and its various branches would go on to influence much of the history of Southern and Central Europe during the Middle Ages, until becoming defunct in 1435. Historically, the House ruled the counties of Anjou, Maine, Touraine, Provence and Forcalquier, the principalities of Achaea and Taranto, and the kingdoms of Sicily, Naples, Hungary, Croatia, Albania, and Poland.

Rise of Charles I and his sons

A younger son of House of Capet king Louis VIII of France ''the Lion'', Charles was first given a noble title by his brother Louis IX of France who succeeded to the French throne in 1226. Charles was named Count of Anjou and Maine; the feudal County of Anjou was a western vassal state of the Kingdom of France, which the Capetians had wrested from the House of Plantagenet only a few decades earlier. Charles married the heiress of the County of Provence named Beatrice of Provence, she was a member of the House of Barcelona; this meant Charles' holdings were growing as Count of Provence. After fighting in the Seventh Crusade, Charles was offered by Pope Clement IV the Kingdom of Sicily — which at the time included not only the island of Sicily but also the southern half of the Italian Peninsula. The reason for Charles being offered the kingdom was because of a conflict between the Papacy and the Holy Roman Empire, the latter of whom were represented by the ruling House of Hohenstaufen. It was at the Battle of Benevento that the ''Guelph'' Capetians gained the Sicilian kingdom from the ''Ghibelline'' Swabians, this was cemented after victory at Tagliacozzo. In keeping with the political landscape of the period, Charles is described by scholars as shrewd, energetic and highly ambitious. He signed the Treaty of Viterbo in 1267 with Baldwin II of Courtenay and William II of Villehardouin, the political alliance gave many of the rights of the Latin Empire to Charles and a marriage alliance for his daughter Beatrice of Sicily. The Byzantines had taken back the city of Constantinople in 1261 and this was a plan to take it back from Michael VIII Palaiologos. It also recognised Charles' possession of Corfu and cities in the Balkans such as Durazzo, as well as giving him suzerainty over the Principality of Achaea and sovereignty of the Aegean islands aside from those already held by the Republic of Venice. For a while Charles was preoccupied helping his French brother in the unsuccessful Eighth Crusade on Tunis. After this he once again focused on Constantinople, but his fleet was wrecked in a freak storm off the coast of Trapani. With the elevation of Pope Gregory X, there was a truce between Charles and Michael in the form of the Council of Lyons, as Christians focused on improving ecumenical relations, with hopes of regaining the Kingdom of Jerusalem back from the Muslims. 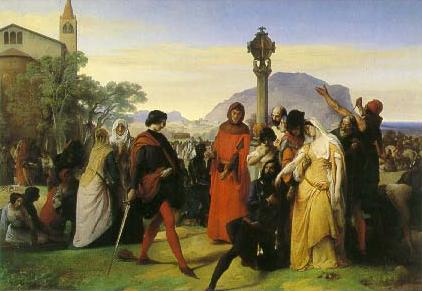 Charles had fully solidified his rule over Durazzo by 1272, creating a small Kingdom of Albania for himself, out of previously Despotate of Epirus territory; he was well received by local chiefs. Charles was driven out of Sicily in 1282, but his successors ruled Naples until 1435.

Charles II and division of the inheritance

In 1355 the last Piast king of Poland, Casimir III, designated his sororal nephew, the Angevin king Louis I of Hungary, as his heir presumptive by the Privilege of Buda. Upon the death of Casimir (5 November 1370), who left no legitimate sons, Louis ascended the Polish throne virtually unopposed. The Polish nobility welcomed his accession, rightly believing that Louis would be an absentee king who would not take much interest in Polish affairs. He sent his mother Elizabeth, sister of Casimir III, to govern Poland as regent. Louis probably considered himself first and foremost king of Hungary; he visited his northern kingdom three times and spent there a couple of months altogether. Negotiations with the Polish nobility frequently took place in Hungary. Hungarians themselves were unpopular in Poland, as was the king's Polish mother who governed the kingdom. In 1376, ''circa'' 160 Hungarians in her retinue were massacred in Kraków and the queen returned to Hungary disgraced. Louis replaced her with their relative, Vladislaus II of Opole. The Hungarian-Polish union fell apart after Louis died in 1382. The dissatisfied Polish ''szlachta'' demanded that his successor in Hungary, Mary, move to Kraków and reign over Hungary and Poland from there. Mary's mother, Elizabeth of Bosnia (widow of Louis and grandniece of Casimir III's father, Vladislaus I), knew that the lack of supporters would render her influence at least as restricted as that of her mother-in-law and refused to move. She abandoned the idea of attempting to subdue the Polish nobility by force and agreed to send her younger surviving daughter, Hedwig, to be crowned as Louis' successor in Poland. Hedvig (known as Jadwiga in Poland) was crowned "king" in Poland's capital, Kraków, on 16 October 1384. Her coronation either reflected the Polish nobility's opposition to her intended husband, William, becoming king without further negotiation, or simply emphasized her status as queen regnant. With her mother's consent, Jadwiga's advisors opened negotiations with Jogaila, Grand Duke of Lithuania, who was still a pagan, concerning his potential marriage to Jadwiga. Jogaila signed the Union of Krewo, pledging to convert to Roman Catholicism and to promote his pagan subjects' conversion. Jogaila, who took the baptismal name Władysław, married Jadwiga on 15 February 1386. Jogaila, now in Polish styled Władysław Jagiełło, was crowned King of Poland on 4 March 1386. As Jadwiga's co-ruler, Jagiełło worked closely with his wife. Hedvig (or Jadwiga) was childless for over a decade. She became pregnant in late 1398 or early 1399. A newborn princess named Elizabeth Bonifacia was delivered on 22 June 1399 at Wawel Castle. However, the infant died after only three weeks, on 13 July 1399.53Jadwiga, too, was on her deathbed. She died on 17 July 1399, four days after her newborn daughter. Thus, the Polish throne went over to the Jagiellonian dynasty of Lithuanian origin. The union of Poland and Lithuania was a decisive moment in the histories of both countries; it marked a beginning of the four centuries of shared history. By 1569 the Polish–Lithuanian union grew into a new state, the Polish–Lithuanian Commonwealth, and lasted until the Third Partition in 1795.

The Kingdom of Albania, or ''Regnum Albaniae'', was established by Charles of Anjou in the Albanian territory he conquered from the Despotate of Epirus in 1271. He took the title of "King of Albania" in February 1272. The kingdom extended from the region of Durrës (then known as Dyrrhachium) south along the coast to Butrint. A major attempt to advance further in direction of Constantinople, failed at the Siege of Berat (1280–1281). A Byzantine counteroffensive soon ensued, which drove the Angevins out of the interior by 1281. The Sicilian Vespers further weakened the position of Charles, and the Kingdom was soon reduced by the Epirotes to a small area around Durrës. The Angevins held out here, however, until 1368, when the city was captured by Karl Thopia. In 1392 Karl Thopia's son surrendered the city and his domains to the Republic of Venice.