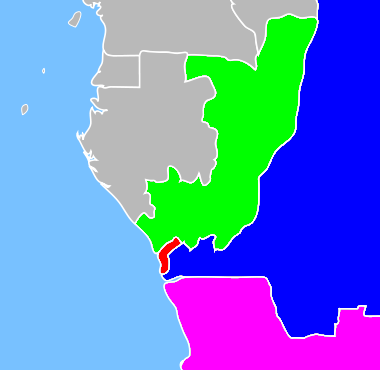 Cabinda (formerly called Portuguese Congo, kg|Kabinda) is an exclave and province of Angola, a status that has been disputed by several political organizations in the territory. The capital city is also called Cabinda, known locally as ''Tchiowa''. The province is divided into four municipalities—Belize, Buco-Zau, Cabinda and Cacongo. Modern Cabinda is the result of a fusion of three kingdoms: N'Goyo, Loango and Kakongo. It has an area of and a population of 716,076 at the 2014 census; the latest official estimate (as at mid 2019) is 824,143. According to 1988 United States government statistics, the total population of the province was 147,200, with a near even split between rural and urban populations. At one point an estimated one third of Cabindans were refugees living in the Democratic Republic of the Congo; however, after the 2007 peace agreement, refugees started returning to their homes. Cabinda is separated from the rest of Angola by a narrow strip of territory belonging to the Democratic Republic of the Congo, which bounds the province on the south and the east. Cabinda is bounded on the north by the Republic of the Congo, and on the west by the Atlantic Ocean. Adjacent to the coast are some of the largest offshore oil fields in the world. Petroleum exploration began in 1954 with the Cabinda Gulf Oil Company, when the territory was under Portuguese rule. Cabinda also produces hardwoods, coffee, cacao, rubber, and palm oil products; however, petroleum production accounts for most of Cabinda's domestic product. Cabinda produces of crude oil per day. Cabinda Oil is associated with Sonangol, Agip Angola Lda (41%), Chevron (39.2%), Total (10%) and Eni (9.8%). In 1885, the Treaty of Simulambuco established Cabinda as a protectorate of the Portuguese Empire, and Cabindan independence movements consider the occupation of the territory by Angola illegal. While the Angolan Civil War largely ended in 2002, an armed struggle persists in the exclave of Cabinda. Some of the factions have proclaimed an independent Republic of Cabinda, with offices in Paris.

Portuguese explorers, missionaries, and traders arrived at the mouth of the Congo River in the mid-15th century, making contact with the Manikongo, the powerful King of the Bakongo tribe. The Manikongo controlled much of the region through affiliation with smaller kingdoms, such as the Kingdoms of Ngoyo, Loango, and Kakongo in present-day Cabinda. Over the years, the Portuguese, Dutch, and English established trading posts, logging camps, and small palm oil processing factories in Cabinda. Trade continued and the European presence grew, resulting in conflicts between the rival colonial powers.

Portugal first claimed sovereignty over Cabinda in the February 1885 Treaty of Simulambuco, which gave Cabinda the status of a protectorate of the Portuguese Crown under the request of "the princes and governors of Cabinda". This is often the basis upon which the legal and historical arguments in defense of the self-determination of modern-day Cabinda are constructed. Article 1, for example, states, "the princes and chiefs and their successors declare, voluntarily, their recognition of Portuguese sovereignty, placing under the protectorate of this nation all the territories by them governed" . Article 2, which is often used in separatist arguments, goes even further: "Portugal is obliged to maintain the integrity of the territories placed under its protection". The Front for the Liberation of the Enclave of Cabinda (FLEC-R) argues that the above-mentioned treaty was signed between the emissaries of the Portuguese Crown and the princes and notables of Cabinda, then called Portuguese Congo, giving rise to not one, but three protectorates: Cacongo, Loango, and Ngoio. Through the Treaty of Simulambuco in 1885 between the kings of Portugal and the princes of Cabinda, a Portuguese protectorate was decreed, reserving rights to the local princes and independent of Angola. Cabinda once had the Congo River as the only natural boundary with Angola, but in 1885, the Berlin Conference extended the territory of the Congo Free State along the Congo River to the river's mouth at the sea.

By the mid-1920s, the borders of Angola had been finally established in negotiations with the neighboring colonial powers. From then on, Cabinda was treated as part of this colony.

The Portuguese constitution of 1933 distinguished between the colony of Angola and the protectorate of Cabinda, but in 1956, the administration of Cabinda was transferred to the governor-general of Angola. The legal distinction of Cabinda's status from that of Angola was also expressed in the Portuguese constitution of 1971. Yet, when Angola was declared an "overseas province" (Província Ultramarina) within the empire of Portugal in 1951, Cabinda was treated as an ordinary district of Angola. In 1972, the name of Angola was changed to "State of Angola". Under Portuguese rule, Cabinda was an important agricultural and forestry center, and in 1967, it discovered huge offshore oil fields. Oil, timber, and cocoa had been its main exports until then. The town of Cabinda, the capital of the territory, was a Portuguese administrative and services center with a port and airfield. The beaches of Cabinda were popular with Portuguese Angolans.

After independence of Angola from Portugal

A 1974 military coup in Lisbon abolished the authoritarian regime established by António de Oliveira Salazar that had prevailed in Portugal for decades. The new government decided immediately to grant all Portuguese colonies the independence for which nationalist guerilla movements had been striving. In Angola, the decolonization process took the form of a violent conflict between the different guerilla movements and their allies. In 1975 the Treaty of Alvor between Portugal and National Liberation Front of Angola (FNLA), People's Movement for the Liberation of Angola (MPLA) and National Union for the Total Independence of Angola (UNITA) reconfirmed Cabinda's status as part of Angola. The treaty was rejected by the Front for the Liberation of the Enclave of Cabinda and other local political organizations which advocated of separate independence. Since then, Cabinda has been, on the one hand, a normal Angolan province, but on the other hand, there has been persistent political protest against this status; the "Kabinda Free State" says the exclave was a Portuguese protectorate until Angola invaded in 1974. They also say they control 85% of Kabinda territory and invite proposals for joint ventures.