CNBC is an American pay television business news channel owned by NBCUniversal News Group, a division of NBCUniversal, with both being ultimately owned by Comcast. Headquartered in Englewood Cliffs, New Jersey, the network primarily carries business day coverage of U.S. and international financial markets. Following the end of the business day and on non-trading days, CNBC primarily carries financial and business-themed documentaries and reality shows. CNBC was originally established on April 17, 1989, as a joint venture between NBC and Cablevision as the Consumer News and Business Channel. Two years later, in 1991, the network acquired its main competitor, the Financial News Network, a move which expanded both its distribution and its workforce. Cablevision subsequently sold its stake to NBC, giving NBC sole ownership. As of February 2015, CNBC is available to approximately 93,623,000 pay television households (80.4% of households with television) in the United States. In 2007, the network was ranked as the 19th-most valuable cable channel in the United States, worth roughly $4 billion. In addition to the domestic U.S. feed, various localized versions of CNBC also operate, serving different regions and countries. NBCUniversal is the owner, or a minority stakeholder, in many of these versions. 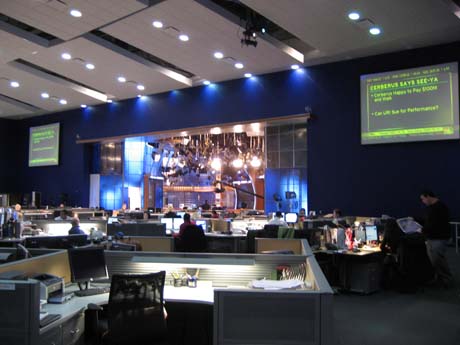 CNBC had its beginnings in 1979 as the Satellite Program Network (SPN), showing a low-budget mix of old movies, instructional and entertainment programs. The channel later changed its name to Tempo Television. After initially signing a letter of intent to acquire Tempo, NBC eventually opted for a deal to lease the channel's transponder in June 1988. On this platform, and under the guidance of Tom Rogers, the channel was relaunched on April 17, 1989 as the Consumer News and Business Channel. NBC and Cablevision initially operated CNBC as a 50-50 joint venture, choosing to headquarter the channel in Fort Lee, New Jersey. CNBC had considerable difficulty getting cable carriage at first, as many providers were skeptical of placing it alongside the longer-established Financial News Network. By the winter of 1990, CNBC was only in 17 million homes – less than half of FNN's potential reach – despite having the muscle of NBC standing behind it. The original financial television concept predates both CNBC and FNN, as several independent TV stations commenced financial programming starting in the late 1960s (WCIU Chicago & KWHY Los Angeles); as Gene Inger, a Registered Investment Advisor, pioneered financial programming in several cities; notably San Francisco, Miami / Fort Lauderdale; then his part-owned WWHT Channel 68 Newark (serving the NY market). Mr. Inger (never part of FNN) disengaged operationally after the sale of Channel 68 to Miami-based Wometco; and today Channel 68 is an NBC property. (Inger was a guest on CNBC for years and as of 2019 provides online commentary from Florida.) However, around this time, FNN encountered serious financial difficulties. After a protracted bidding war with a Dow Jones-Westinghouse Broadcasting consortium (the former's assets would be used to build a rival channel almost two decades later), CNBC acquired FNN for $154.3 million on May 21, 1991 and immediately merged the two operations, hiring around 60 of FNN's 300-strong workforce. The deal increased the distribution of the newly enlarged network to over 40 million homes. Cablevision sold its 50% stake to NBC upon completion of the deal. With the full name "Consumer News and Business Channel" dropped, the network's daytime business programming was branded "CNBC/FNN Daytime," although this was phased out by 1992. Roger Ailes was hired as the new president of CNBC in 1993, tasked by NBC CEO Bob Wright with turning around the struggling network. Under Ailes' leadership from 1993 through 1995, the $400 million network doubled in value, and its revenues tripled. In addition, Ailes oversaw the launch of a 1994 spin-off channel from CNBC, called "America's Talking." Ailes left CNBC and America's Talking in late 1995 when Microsoft and NBC created a joint venture to reprogram America's Talking as MSNBC. CNBC grew during the 1990s, launching Asian and European versions of the channel in 1995 and 1996 respectively. In 1997, CNBC formed a strategic alliance with Dow Jones, including content sharing with Dow Jones Newswires and ''The Wall Street Journal'' and the rebranding of the channel as "a service of NBC Universal and Dow Jones". CNBC's international channels were then merged into a 50-50 joint venture with their Dow Jones-owned rivals, London-based EBN (European Business News) and Singapore-based ABN (Asia Business News) in 1998, while ratings grew on the U.S. channel until the new millennium's dot-com bubble burst in 2000.

The new millennium also brought changes to the network in 2003, moving its world headquarters from 2200 Fletcher Avenue, Fort Lee to 900 Sylvan Avenue (Route 9W) in Englewood Cliffs, New Jersey, which features completely digital video production and studios made by PDG Ltd of Beeston, Nottinghamshire and the FX Group of Ocoee, Florida. NBC Universal reacquired full control of loss-making CNBC Europe and CNBC Asia from Dow Jones at the end of 2005. The licensing agreement between Dow and CNBC U.S. remained intact, however. Today, CNBC provides business news programming on weekdays from 5:00 a.m. to 7:00 p.m., Eastern Time, while broadcasting talk shows, investigative reports, documentaries, infomercials, and other programs at all other times. A rolling ticker provides real-time updates on share prices on the NYSE, NASDAQ, and AMEX, as well as market indices, news summaries, and weather updates by NBC meteorologists (prior to March 27, 2006, all of CNBC's weather reports were provided by AccuWeather). A rotating top band of the screen rotates provides real-time updates on index and commodity prices from world markets. On October 13, 2014, coincidentally the 11th anniversary of CNBC's relocation to its current facilities in Englewood Cliffs, NJ, CNBC switched to a full 16:9 letterbox presentation, in line with its Asian and European siblings (see "On-air presentation" below for more information). As of January 4, 2016, the network's 480i standard definition feed now shows the same 16:9 HD feed on its 4:3 picture, due to the application of the AFD #10 flag.

CNBC provides a variety of programs throughout the business day. Live programming is broadcast on weekdays from 5:00 a.m. until 8:00 p.m. and provides reports on U.S. businesses, updates of stock market indices and commodities prices, interviews with CEOs and business leaders, and commentary from many investment professionals. The following is the usual weekday "business day" (term used by CNBC hosts and announcers) lineup (as of October 2020, all times Eastern): 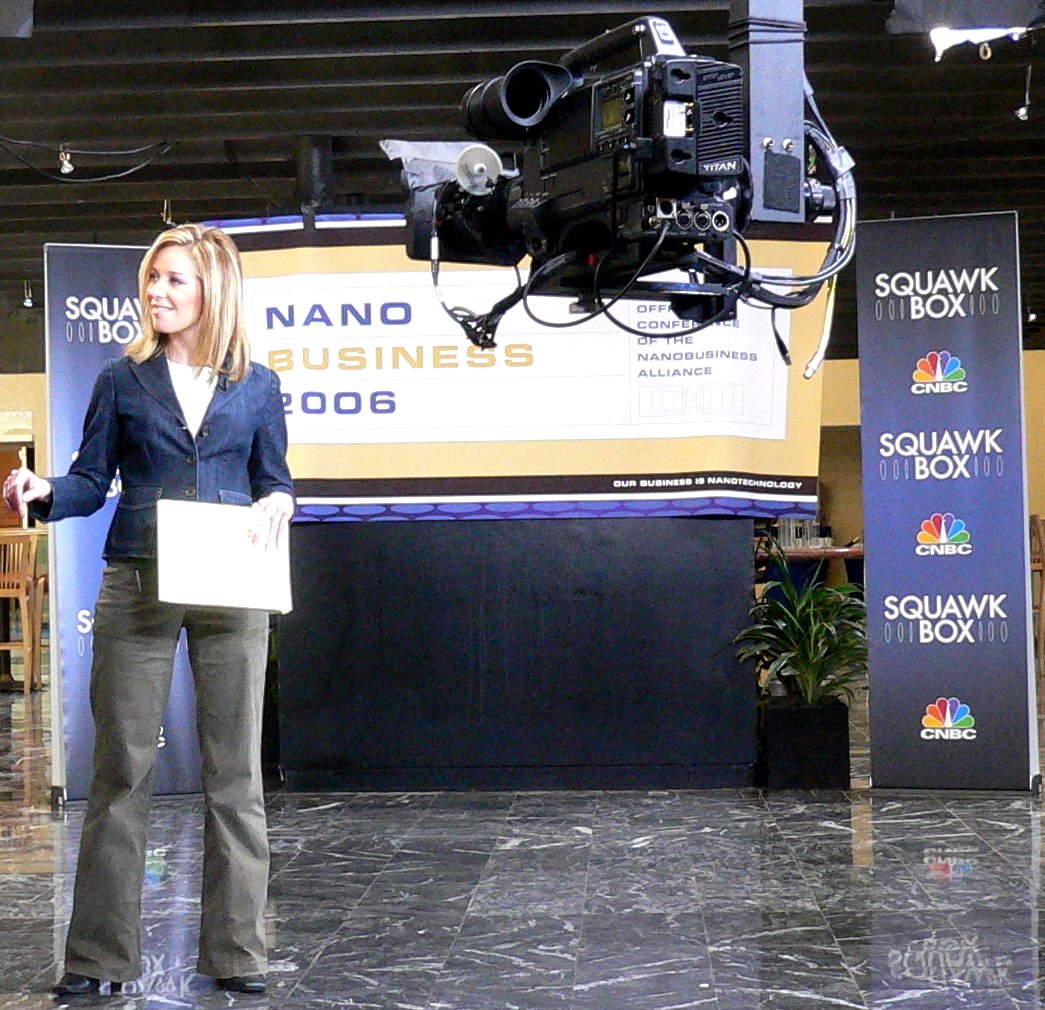 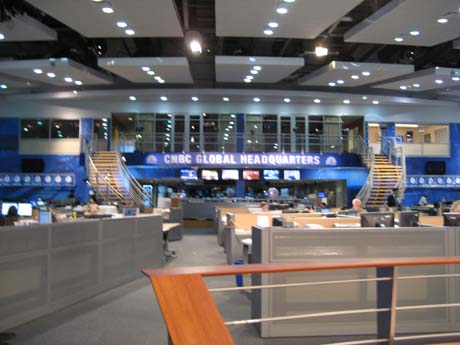 On September 17, 2007, the network has also run hourly ''CNBC.com News Now'' update segments during business day programming. These short bulletins, which are around 30 seconds in length (similar to ESPN's ''SportsCenter Right Now''), air before the start of the network's programs from ''Squawk on the Street'' through ''The Kudlow Report''. The ''CNBC.com News Now'' update segments were discontinued as of early 2010. These bulletins were reintroduced in 2015 and were renamed CNBC News Update. They are aired hourly, on the half-hour between 10:30 a.m. and 4:30 p.m. The bulletins are read by Sue Herera. CNBC also produced ''Nightly Business Report'', a 30-minute weeknight business newscast distributed to U.S. public television stations. Launched in 1979, CNBC assumed production of the series in 2013 and ended production in December 2019. ''NBR'' was hosted by CNBC personalities Sue Herera and Bill Griffeth. On August 24, 2020, CNBC announced that it would premiere a new evening news program hosted by former Fox News Channel anchor Shepard Smith, ''The News with Shepard Smith'', on September 30. The then-upcoming program was described as being "non-partisan" and "fact-based".

CNBC's breakout hit among its original series is ''Mad Money''. Hosted by money manager Jim Cramer, the hour-long show gives stock advice to viewers who call to the program. The show also has a popular segment called "The Lightning Round". In August 2007, Cramer's on-air tirade about the weakening economy, which was seen during the "Stop Trading" segment on ''Street Signs'', received national attention and helped galvanize widespread support for the Federal Reserve Board to cut interest rates. On January 24, 2007, the network launched a long-anticipated monthly newsmagazine called ''Business Nation'', which is anchored by award-winning journalist David Faber. Each edition of the program covers three stories; a mixture of profiles, investigative pieces and features. The format of the show is structured similarly to HBO's ''Real Sports''. Other special or weekend programming includes ''CNBC on Assignment'' (for example, ''The Age of Wal-Mart''), ''Cover to Cover'', ''The Suze Orman Show'' and ''On the Money''. Documentaries featured as part of its CNBC Originals slate have included ''Marijuana Inc: Inside America's Pot Industry'' (2009), ''Trash Inc: The Secret Life of Garbage'' (2010), ''Supermarkets Inc: Inside a $500 Billion Money Machine'' (2011), ''Customer (Dis)Service'' (2012), ''UPS/FedEX: Inside the Package Wars'' (2012), and ''Love @ First Byte: The Secret Science of Online Dating'' (2012). In May 2010, CNBC announced that it would be adding business and financial-themed movies to its Friday night lineup under the name "CNBC Cinema." In the fall of 2011, CNBC began to brand its primetime lineup under the title ''CNBC Smart''. Continuing its focus on documentaries focusing on business, CNBC marketed ''Smart'' as "the place where the who's who comes to learn the what's what." Since 2013, CNBC regularly shows one Premier League game at 10:00 p.m. ET.

On March 5, 2013, CNBC rebranded its primetime lineup once again as ''CNBC Prime'', a move first announced on January 7 of the same year. Hoping to attract a more mainstream audience, the ''Prime'' block introduced business-themed reality series to the lineup with the series premieres of ''The Car Chasers'' and ''Treasure Detectives''. CNBC planned to launch at least eight new series through the ''Prime'' block throughout 2013. Among the original reality programs airing on CNBC Prime include ''American Greed'', ''Restaurant Startup'', ''Blue Collar Millionaires'', ''Jay Leno's Garage'', ''The Profit'', ''West Texas Investors Club'', and ''Secret Lives of the Super Rich''. In 2016, CNBC announced two new reality series including ''Cleveland Hustles'' and a spin-off of ''The Profit'' titled ''The Partner''. In 2018, CNBC announced other new series in development, such as ''BYOB: Be Your Own Boss'', ''Deadly Rich'' (a true crime series focusing on the wealthy), ''Staten Island Hustle'', a revival of former NBC game show ''Deal or No Deal'', as well as renewals for ''American Greed'', ''Jay Leno's Garage'', and ''Secret Lives of the Super Rich''.

CNBC has experimented with non-business programming during primetime hours with a mixed record of success, including a talk show hosted by Dennis Miller. The channel has at times rebroadcast several NBC programs, including ''Late Night with Conan O'Brien'', ''Deal or No Deal'', ''The Apprentice'', ''The Apprentice: Martha Stewart'', and ''1 vs. 100''. Until 2017, CNBC participated in USA Network's coverage of the Westminster Kennel Club Dog Show due to conflicts with ''WWE Raw''. CNBC has occasionally served as an overflow outlet for NBC Sports programming; beginning in 2000, CNBC has carried portions of NBC's coverage of the Olympic Games outside of business day hours. The frequent delegation of curling coverage to CNBC during the 2010 Winter Olympics helped the sport gain a cult following among the business community.