CFA francs are used in fourteen countries: twelve nations formerly ruled by France in West and Central Africa (excluding Guinea and Mauritania, which withdrew), plus Guinea-Bissau (a former Portuguese colony), and Equatorial Guinea (a former Spanish colony). These fourteen countries have a combined population of 147.5 million people (as of 2013), and a combined GDP of US$166.6 billion (as of 2012). The ISO currency codes are XAF for the Central African CFA franc and XOF for the West African CFA franc.

The currency has been criticized for making economic planning for the developing countries of French West Africa all but impossible since the CFA's value is pegged to the euro (whose monetary policy is set by the European Central Bank). Others disagree and argue that the CFA "helps stabilize the national currencies of Franc Zone member-countries and greatly facilitates the flow of exports and imports between France and the member-countries". The European Union's own assessment of the CFA's link to the euro, carried out in 2008, noted that "benefits from economic integration within each of the two monetary unions of the CFA franc zone, and even more so between them, remained remarkably low" but that "the peg to the French franc and, since 1999, to the euro as exchange rate anchor is usually found to have had favourable effects in the region in terms of macroeconomic stability".

Between 1945 and 1958, CFA stood for ("French colonies of Africa"); then for ("French Community of Africa") between 1958 (establishment of the French Fifth Republic) and the independence of these African countries at the beginning of the 1960s. Since independence, CFA is taken to mean (African Financial Community), but in actual use, the term can have two meanings (see Institutions below).

The CFA franc was created on 26 December 1945, along with the CFP franc. The reason for their creation was the weakness of the French franc immediately after World War II. When France ratified the Bretton Woods Agreement in December 1945, the French franc was devalued in order to set a fixed exchange rate with the US dollar. New currencies were created in the French colonies to spare them the strong devaluation, thereby facilitating imports from France. French officials presented the decision as an act of generosity. René Pleven, the French minister of finance, was quoted as saying -

Changes in countries using the franc

In 1998, in anticipation of Economic and Monetary Union of the European Union, the Council of the European Union addressed the monetary agreements France had with the CFA Zone and Comoros and ruled that: * The agreements are unlikely to have any material effect on the monetary and exchange rate policy of the Eurozone * In their present forms and states of implementation, the agreements are unlikely to present any obstacle to a smooth functioning of economic and monetary union * Nothing in the agreements can be construed as implying an obligation for the European Central Bank (ECB) or any national central bank to support the convertibility of the CFA and Comorian francs * Modifications to the existing agreements will not lead to any obligations for the European Central or any national central bank * The French Treasury will guarantee the free convertibility at a fixed parity between the euro and the CFA and Comorian francs * The competent French authorities shall keep the European Commission, the European Central Bank and the Economic and Financial Committee informed about the implementation of the agreements and inform the Committee prior to changes of the parity between the euro and the CFA and Comorian francs * Any change to the nature or scope of the agreements would require Council approval on the basis of a Commission recommendation and ECB consultation


Criticism and replacement in West Africa

Critics argue that in exchange for the guarantees provided by the French treasury, African countries channel more money to France than they receive in aid. They also argue that they have no say in deciding key monetary policies. In January 2019, the Italian government accused France of impoverishing Africa through the CFA franc. France responded by recalling Italy's ambassador to Paris. However, criticism of the CFA franc, coming from various African organisations, continued. On 21 December 2019, President Alassane Ouattara of the Ivory Coast and President Emmanuel Macron of France announced an initiative to replace the West African CFA Franc with the Eco. Subsequently, a reform of the West African CFA franc was initiated. In May 2020, the French National Assembly agreed to end the French engagement in the West African CFA franc. The countries using the currency will no longer have to deposit half of their foreign exchange reserves with the French Treasury. The West African CFA franc is expected to be renamed to the "Eco" in the near future. 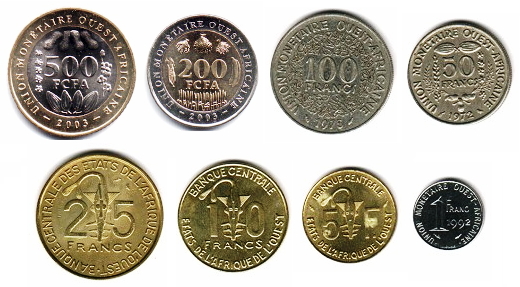 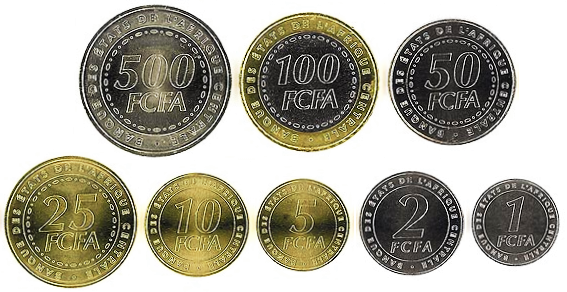 The Central Africa CFA franc (XAF) is known in French as the , where CFA stands for ("Financial Cooperation in Central Africa"). It is issued by the BEAC (, i.e., "Bank of the Central African States"), located in Yaoundé, Cameroon, for the six countries of the CEMAC (, i.e., "Economic and Monetary Community of Central Africa"): * * * * * * These six countries have a combined population of 45.0 million people (as of 2013), and a combined GDP of US$88.2 billion (as of 2012). In 1975, Central African CFA banknotes were issued with an obverse unique to each participating country, and common reverse, in a fashion similar to euro coins. Equatorial Guinea, the only former Spanish colony in the zone, adopted the CFA in 1984.

*'
History of the CFA franc