Butter is a dairy product made from the fat and protein components of milk or cream. It is a semi-solid emulsion at room temperature, consisting of approximately 80% butterfat. It is used at room temperature as a spread, melted as a condiment, and used as an ingredient in baking, sauce making, pan frying, and other cooking procedures. Most frequently made from cow's milk, butter can also be manufactured from the milk of other mammals, including sheep, goats, buffalo, and yaks. It is made by churning milk or cream to separate the fat globules from the buttermilk. Salt and food colorings are sometimes added to butter. Rendering butter, removing the water and milk solids, produces clarified butter or ''ghee'', which is almost entirely butterfat. Butter is a water-in-oil emulsion resulting from an inversion of the cream, where the milk proteins are the emulsifiers. Butter remains a firm solid when refrigerated, but softens to a spreadable consistency at room temperature, and melts to a thin liquid consistency at . The density of butter is 911 grams per litre (0.950 lb per US pint). It generally has a pale yellow color, but varies from deep yellow to nearly white. Its natural, unmodified color is dependent on the source animal's feed and genetics, but the commercial manufacturing process commonly manipulates the color with food colorings like annatto or carotene.

The word ''butter'' derives (via Germanic languages) from the Latin ''butyrum'', which is the latinisation of the Greek βούτυρον (''bouturon''). This may be a compound of βοῦς (''bous''), "ox, cow" + τυρός (''turos''), "cheese", that is "cow-cheese". The word ''turos'' ("cheese") is attested in Mycenaean Greek. The latinized form is found in the name butyric acid, a compound found in rancid butter and dairy products such as Parmesan cheese. In general use, the term "butter" refers to the spread dairy product when unqualified by other descriptors. The word commonly is used to describe puréed vegetable or seed and nut products such as peanut butter and almond butter. It is often applied to spread fruit products such as apple butter. Fats such as cocoa butter and shea butter that remain solid at room temperature are also known as "butters". Non-dairy items that have a dairy-butter consistency may use "butter" to call that consistency to mind, including food items such as maple butter and witch's butter and nonfood items such as baby bottom butter, hyena butter, and rock butter.

Unhomogenized milk and cream contain butterfat in microscopic globules. These globules are surrounded by membranes made of phospholipids (fatty acid emulsifiers) and proteins, which prevent the fat in milk from pooling together into a single mass. Butter is produced by agitating cream, which damages these membranes and allows the milk fats to conjoin, separating from the other parts of the cream. Variations in the production method will create butters with different consistencies, mostly due to the butterfat composition in the finished product. Butter contains fat in three separate forms: free butterfat, butterfat crystals, and undamaged fat globules. In the finished product, different proportions of these forms result in different consistencies within the butter; butters with many crystals are harder than butters dominated by free fats. Churning produces small butter grains floating in the water-based portion of the cream. This watery liquid is called buttermilk—although the buttermilk most common today is instead a directly fermented skimmed milk. The buttermilk is drained off; sometimes more buttermilk is removed by rinsing the grains with water. Then the grains are "worked": pressed and kneaded together. When prepared manually, this is done using wooden boards called scotch hands. This consolidates the butter into a solid mass and breaks up embedded pockets of buttermilk or water into tiny droplets. Commercial butter is about 80% butterfat and 15% water; traditionally made butter may have as little as 65% fat and 30% water. Butterfat is a mixture of triglyceride, a triester derived from glycerol and three of any of several fatty acid groups. Butter becomes rancid when these chains break down into smaller components, like butyric acid and diacetyl. The density of butter is 0.911 g/cm3 (0.527 oz/in3), about the same as ice. In some countries, butter is given a grade before commercial distribution.

Before modern factory butter making, cream was usually collected from several milkings and was therefore several days old and somewhat fermented by the time it was made into butter. Butter made from a fermented cream is known as cultured butter. During fermentation, the cream naturally sours as bacteria convert milk sugars into lactic acid. The fermentation process produces additional aroma compounds, including diacetyl, which makes for a fuller-flavored and more "buttery" tasting product. Today cultured butter is usually made from pasteurized cream whose fermentation is produced by the introduction of ''Lactococcus'' and ''Leuconostoc'' bacteria. thumb|275px|Chart of milk products and production relationships, including butter. Another method for producing cultured butter, developed in the early 1970s, is to produce butter from fresh cream and then incorporate bacterial cultures and lactic acid. Using this method, the cultured butter flavor grows as the butter is aged in cold storage. For manufacturers, this method is more efficient, since aging the cream used to make butter takes significantly more space than simply storing the finished butter product. A method to make an artificial simulation of cultured butter is to add lactic acid and flavor compounds directly to the fresh-cream butter; while this more efficient process is claimed to simulate the taste of cultured butter, the product produced is not cultured but is instead flavored. Dairy products are often pasteurized during production to kill pathogenic bacteria and other microbes. Butter made from pasteurized fresh cream is called sweet cream butter. Production of sweet cream butter first became common in the 19th century, with the development of refrigeration and the mechanical cream separator. Butter made from fresh or cultured unpasteurized cream is called raw cream butter. While butter made from pasteurized cream may keep for several months, raw cream butter has a shelf life of roughly ten days. Cultured butter is preferred throughout continental Europe, while sweet cream butter dominates in the United States and the United Kingdom. Cultured butter is sometimes labeled "European-style" butter in the United States, although cultured butter is made and sold by some, especially Amish, dairies. Commercial raw cream butter is virtually unheard-of in the United States. Raw cream butter is generally only found made at home by consumers who have purchased raw whole milk directly from dairy farmers, skimmed the cream themselves, and made butter with it. It is rare in Europe as well. Several "spreadable" butters have been developed. These remain softer at colder temperatures and are therefore easier to use directly out of refrigeration. Some methods modify the makeup of the butter's fat through chemical manipulation of the finished product, some manipulate the cattle's feed, and some incorporate vegetable oil into the butter. "Whipped" butter, another product designed to be more spreadable, is aerated by incorporating nitrogen gas—normal air is not used to avoid oxidation and rancidity. All categories of butter are sold in both salted and unsalted forms. Either granular salt or a strong brine are added to salted butter during processing. In addition to enhanced flavor, the addition of salt acts as a preservative. The amount of butterfat in the finished product is a vital aspect of production. In the United States, products sold as "butter" must contain at least 80% butterfat. In practice, most American butters contain slightly more than that, averaging around 81% butterfat. European butters generally have a higher ratio—up to 85%. 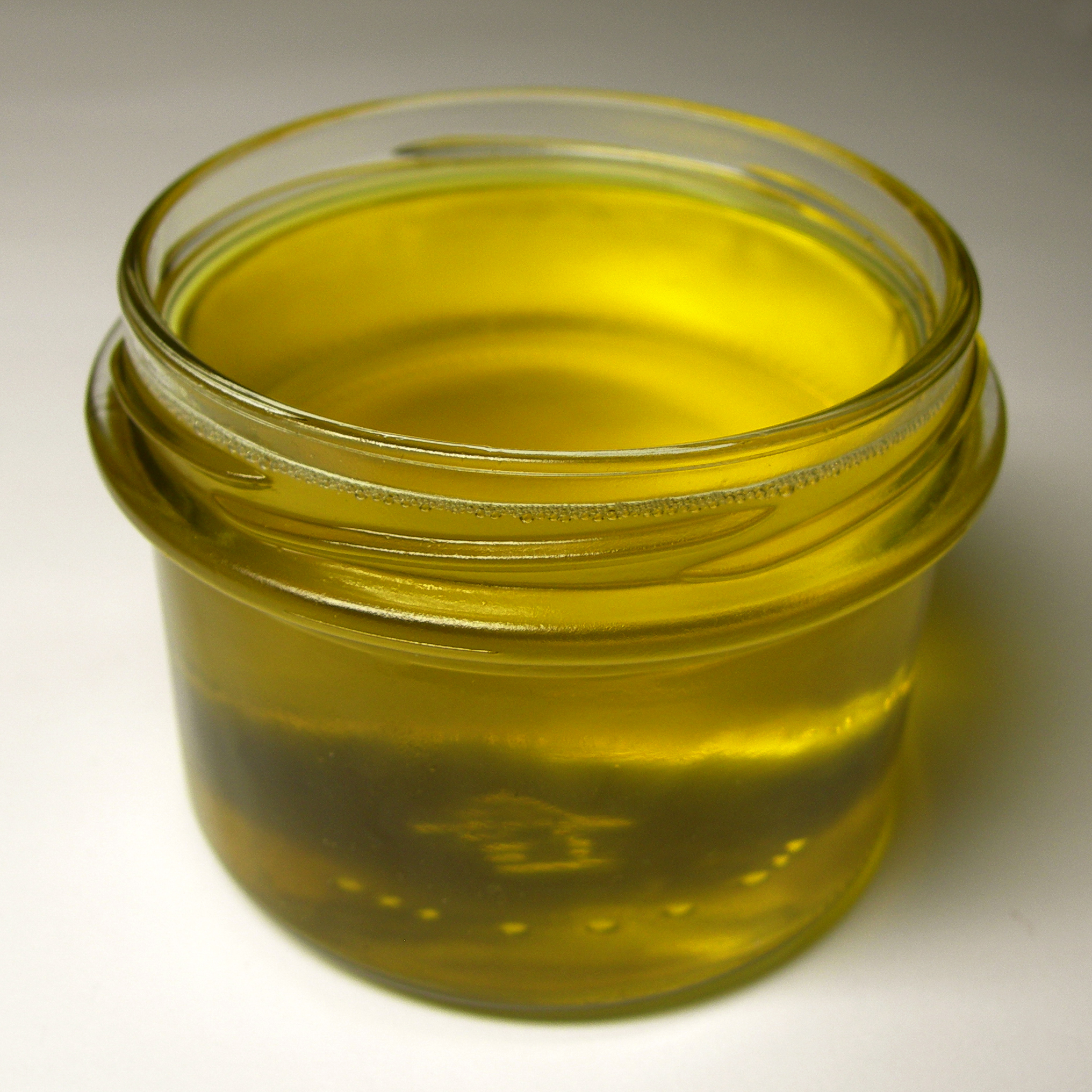 Clarified butter is butter with almost all of its water and milk solids removed, leaving almost-pure butterfat. Clarified butter is made by heating butter to its melting point and then allowing it to cool; after settling, the remaining components separate by density. At the top, whey proteins form a skin, which is removed. The resulting butterfat is then poured off from the mixture of water and casein proteins that settle to the bottom. Ghee is clarified butter that has been heated to around 120 °C (250 °F) after the water evaporated, turning the milk solids brown. This process flavors the ghee, and also produces antioxidants that help protect it from rancidity. Because of this, ghee can be kept for six to eight months under normal conditions.

Cream may be separated (usually by a centrifugal separator) from whey instead of milk, as a byproduct of cheese-making. Whey butter may be made from whey cream. Whey cream and butter have a lower fat content and taste more salty, tangy and "cheesy". They are also cheaper than "sweet" cream and butter. The fat content of whey is low, so 1000 pounds of whey will typically give 3 pounds of butter. 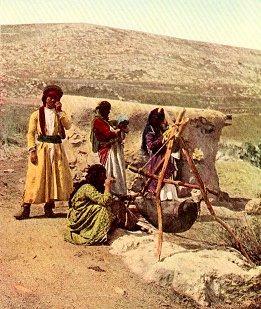 The earliest butter would have been from sheep or goat's milk; cattle are not thought to have been domesticated for another thousand years. An ancient method of butter making, still used today in parts of Africa and the Near East, involves a goat skin half filled with milk, and inflated with air before being sealed. The skin is then hung with ropes on a tripod of sticks, and rocked until the movement leads to the formation of butter. In the Mediterranean climate, unclarified butter spoils quickly, unlike cheese, so it is not a practical method of preserving the nutrients of milk. The ancient Greeks and Romans seemed to have considered butter a food fit more for the northern barbarians. A play by the Greek comic poet Anaxandrides refers to Thracians as ''boutyrophagoi'', "butter-eaters". In his ''Natural History'', Pliny the Elder calls butter "the most delicate of food among barbarous nations" and goes on to describe its medicinal properties. Later, the physician Galen also described butter as a medicinal agent only. Historian and linguist Andrew Dalby says most references to butter in ancient Near Eastern texts should more correctly be translated as ghee. Ghee is mentioned in the Periplus of the Erythraean Sea as a typical trade article around the first century CE Arabian Sea, and Roman geographer Strabo describes it as a commodity of Arabia and Sudan.