Brucellosis is a highly contagious zoonosis caused by ingestion of unpasteurized milk or undercooked meat from infected animals, or close contact with their secretions. It is also known as undulant fever, Malta fever, and Mediterranean fever. ''Brucella'' species are small, Gram-negative, nonmotile, nonspore-forming, rod-shaped (coccobacilli) bacteria. They function as facultative intracellular parasites, causing chronic disease, which usually persists for life. Four species infect humans: ''B. abortus'', ''B. canis'', ''B. melitensis'', and ''B. suis''. ''B. abortus'' is less virulent than ''B. melitensis'' and is primarily a disease of cattle. ''B. canis'' affects dogs. ''B. melitensis'' is the most virulent and invasive species; it usually infects goats and occasionally sheep. ''B. suis'' is of intermediate virulence and chiefly infects pigs. Symptoms include profuse sweating and joint and muscle pain. Brucellosis has been recognized in animals and humans since the early 20th century. 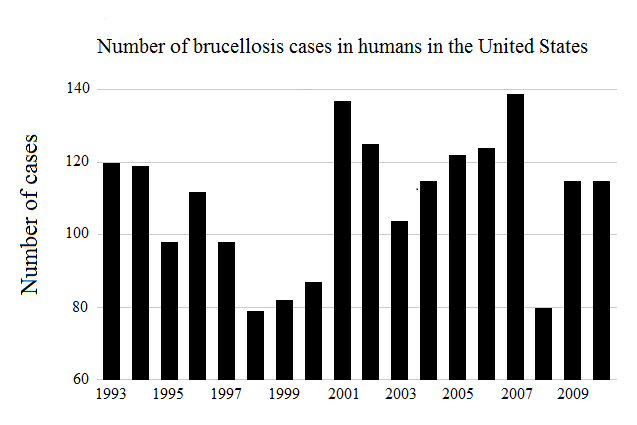 The symptoms are like those associated with many other febrile diseases, but with emphasis on muscular pain and night sweats. The duration of the disease can vary from a few weeks to many months or even years. In the first stage of the disease, bacteremia occurs and leads to the classic triad of undulant fevers, sweating (often with characteristic foul, moldy smell sometimes likened to wet hay), and migratory arthralgia and myalgia (joint and muscle pain). Blood tests characteristically reveal a low number of white blood cells and red blood cells, show some elevation of liver enzymes such as aspartate aminotransferase and alanine aminotransferase, and demonstrate positive Bengal rose and Huddleston reactions. Gastrointestinal symptoms occur in 70% of cases and include nausea, vomiting, decreased appetite, unintentional weight loss, abdominal pain, constipation, diarrhea, an enlarged liver, liver inflammation, liver abscess, and an enlarged spleen. This complex is, at least in Portugal, Israel, Syria, and Jordan, known as Malta fever. During episodes of Malta fever, melitococcemia (presence of brucellae in the blood) can usually be demonstrated by means of blood culture in tryptose medium or Albini medium. If untreated, the disease can give origin to focalizations or become chronic. The focalizations of brucellosis occur usually in bones and joints, and osteomyelitis or spondylodiscitis of the lumbar spine accompanied by sacroiliitis is very characteristic of this disease. Orchitis is also common in men. The consequences of ''Brucella'' infection are highly variable and may include arthritis, spondylitis, thrombocytopenia, meningitis, uveitis, optic neuritis, endocarditis, and various neurological disorders collectively known as neurobrucellosis.

The diagnosis of brucellosis relies on: # Demonstration of the agent: blood cultures in tryptose broth, bone marrow cultures: The growth of brucellae is extremely slow (they can take up to two months to grow) and the culture poses a risk to laboratory personnel due to high infectivity of brucellae. # Demonstration of antibodies against the agent either with the classic Huddleson, Wright, and/or Bengal Rose reactions, either with ELISA or the 2-mercaptoethanol assay for IgM antibodies associated with chronic disease # Histologic evidence of granulomatous hepatitis on hepatic biopsy # Radiologic alterations in infected vertebrae: the Pedro Pons sign (preferential erosion of the anterosuperior corner of lumbar vertebrae) and marked osteophytosis are suspicious of brucellic spondylitis. Definite diagnosis of brucellosis requires the isolation of the organism from the blood, body fluids, or tissues, but serological methods may be the only tests available in many settings. Positive blood culture yield ranges between 40 and 70% and is less commonly positive for ''B. abortus'' than ''B. melitensis'' or ''B. suis''. Identification of specific antibodies against bacterial lipopolysaccharide and other antigens can be detected by the standard agglutination test (SAT), rose Bengal, 2-mercaptoethanol (2-ME), antihuman globulin (Coombs’) and indirect enzyme-linked immunosorbent assay (ELISA). SAT is the most commonly used serology in endemic areas. An agglutination titre greater than 1:160 is considered significant in nonendemic areas and greater than 1:320 in endemic areas. Due to the similarity of the O polysaccharide of ''Brucella'' to that of various other Gram-negative bacteria (e.g. ''Francisella tularensis'', ''Escherichia coli'', ''Salmonella urbana'', ''Yersinia enterocolitica'', ''Vibrio cholerae'', and ''Stenotrophomonas maltophilia''), the appearance of cross-reactions of class M immunoglobulins may occur. The inability to diagnose ''B. canis'' by SAT due to lack of cross-reaction is another drawback. False-negative SAT may be caused by the presence of blocking antibodies (the prozone phenomenon) in the α2-globulin (IgA) and in the α-globulin (IgG) fractions. Dipstick assays are new and promising, based on the binding of ''Brucella'' IgM antibodies, and are simple, accurate, and rapid. ELISA typically uses cytoplasmic proteins as antigens. It measures IgM, IgG, and IgA with better sensitivity and specificity than the SAT in most recent comparative studies. The commercial Brucellacapt test, a single-step immunocapture assay for the detection of total anti-''Brucella'' antibodies, is an increasingly used adjunctive test when resources permit. PCR is fast and should be specific. Many varieties of PCR have been developed (e.g. nested PCR, realtime PCR, and PCR-ELISA) and found to have superior specificity and sensitivity in detecting both primary infection and relapse after treatment. Unfortunately, these are not standardized for routine use, and some centres have reported persistent PCR positivity after clinically successful treatment, fuelling the controversy about the existence of prolonged chronic brucellosis. Other laboratory findings include normal peripheral white cell count, and occasional leucopenia with relative lymphocytosis. The serum biochemical profiles are commonly normal.

Surveillance using serological tests, as well as tests on milk such as the milk ring test, can be used for screening and play an important role in campaigns to eliminate the disease. Also, individual animal testing both for trade and for disease-control purposes is practiced. In endemic areas, vaccination is often used to reduce the incidence of infection. An animal vaccine is available that uses modified live bacteria. The World Organisation for Animal Health ''Manual of Diagnostic Test and Vaccines for Terrestrial Animals'' provides detailed guidance on the production of vaccines. As the disease is closer to being eliminated, a test and eradication program is required to completely eliminate it. The main way of preventing brucellosis is by using fastidious hygiene in producing raw milk products, or by pasteurizing all milk that is to be ingested by human beings, either in its unaltered form or as a derivative, such as cheese.

Antibiotics such as tetracyclines, rifampin, and the aminoglycosides streptomycin and gentamicin are effective against ''Brucella'' bacteria. However, the use of more than one antibiotic is needed for several weeks, because the bacteria incubate within cells. The gold standard treatment for adults is daily intramuscular injections of streptomycin 1 g for 14 days and oral doxycycline 100 mg twice daily for 45 days (concurrently). Gentamicin 5 mg/kg by intramuscular injection once daily for 7 days is an acceptable substitute when streptomycin is not available or contraindicated. Another widely used regimen is doxycycline plus rifampin twice daily for at least 6 weeks. This regimen has the advantage of oral administration. A triple therapy of doxycycline, with rifampin and co-trimoxazole, has been used successfully to treat neurobrucellosis. Doxycycline plus streptomycin regimen (for 2 to 3 weeks) is more effective than doxycycline plus rifampicin regimen (for 6 weeks). Doxycycline is able to cross the blood–brain barrier, but requires the addition of two other drugs to prevent relapse. Ciprofloxacin and co-trimoxazole therapy is associated with an unacceptably high rate of relapse. In brucellic endocarditis, surgery is required for an optimal outcome. Even with optimal antibrucellic therapy, relapses still occur in 5 to 10% of patients with Malta fever.

The mortality of the disease in 1909, as recorded in the British Army and Navy stationed in Malta, was 2%. The most frequent cause of death was endocarditis. Recent advances in antibiotics and surgery have been successful in preventing death due to endocarditis. Prevention of human brucellosis can be achieved by eradication of the disease in animals by vaccination and other veterinary control methods such as testing herds/flocks and slaughtering animals when infection is present. Currently, no effective vaccine is available for humans. Boiling milk before consumption, or before using it to produce other dairy products, is protective against transmission via ingestion. Changing traditional food habits of eating raw meat, liver, or bone marrow is necessary, but difficult to implement. Patients who have had brucellosis should probably be excluded indefinitely from donating blood or organs. Exposure of diagnostic laboratory personnel to ''Brucella'' organisms remains a problem in both endemic settings and when brucellosis is unknowingly imported by a patient. After appropriate risk assessment, staff with significant exposure should be offered postexposure prophylaxis and followed up serologically for 6 months. Recently published experience confirms that prolonged and frequent serological follow-up consumes significant resources without yielding much information, and is burdensome for the affected staff, who often fail to comply. The side effects of the usual recommended regimen of rifampicin and doxycycline for 3 weeks also reduces treatment adherence. As no evidence shows treatment with two drugs is superior to monotherapy, British guidelines now recommend doxycycline alone for 3 weeks and a less onerous follow-up protocol.

According to a study published in 2002, an estimated 10–13% of farm animals are infected with ''Brucella'' species. Annual losses from the disease were calculated at around $60 million. Since 1932, government agencies have undertaken efforts to contain the disease. Currently, all cattle of ages 3–8 months must receive the ''Brucella abortus'' strain 19 vaccine.

Australia is free of cattle brucellosis, although it occurred in the past. Brucellosis of sheep or goats has never been reported. Brucellosis of pigs does occur. Feral pigs are the typical source of human infections.

An outbreak infecting humans took place in Lanzhou in 2020 after the Lanzhou Biopharmaceutical Plant, which was involved in vaccine production, accidentally pumped out the bacteria into the atmosphere in exhaust air due to use of expired disinfectant. The outbreak affected over 6,000 people.

Until the early 20th century, the disease was endemic in Malta to the point of it being referred to as "Maltese fever". Since 2005, due to a strict regimen of certification of milk animals and widespread use of pasteurization, the illness has been eradicated from Malta.

Ireland was declared free of brucellosis on 1 July 2009. The disease had troubled the country's farmers and veterinarians for several decades. The Irish government submitted an application to the European Commission, which verified that Ireland had been liberated. Brendan Smith, Ireland's then Minister for Agriculture, Food and the Marine, said the elimination of brucellosis was "a landmark in the history of disease eradication in Ireland". Ireland's Department of Agriculture, Food and the Marine intends to reduce its brucellosis eradication programme now that eradication has been confirmed.

Mainland Britain has been free of brucellosis since 1979, although there have been episodic re-introductions since. The last outbreak of brucellosis in Great Britain was in cattle in Cornwall in 2004.