Brest ( be|Брэст|Brest, ; russian: Брест|Brest, ; pl|Brześć; lt|Brasta; uk|Берестя|Berestia; yi|בריסק|Brisk), formerly Brest-Litovsk ( be|links=no|Берасце, Берасце Літоўскі (Брэст-Лiтоўск); lt|links=no|Lietuvos Brasta; pl|links=no|Brześć Litewski, ), Brest-on-the-Bug ( pl|links=no|Brześć nad Bugiem), is a city (population 350,616 in 2019) in Belarus at the border with Poland opposite the Polish city of Terespol, where the Bug and Mukhavets rivers meet. It is the capital city of the Brest Region. The city of Brest is a historic site of many cultures. It hosted the important historical events, such as the Union of Brest and Treaty of Brest-Litovsk. The Brest Fortress was recognized by the Soviet Union as the Hero Fortress in honor of the defense of Brest Fortress in June 1941. For most of the medieval times, the city was part of the Grand Duchy of Lithuania. It became part of the Polish–Lithuanian Commonwealth in 1569. As a result of the Partitions of Poland, it was incorporated into the Russian Empire in 1795. After World War I, the city was conquered by the Second Polish Republic. During the Invasion of Poland by Nazi Germany and the Soviet Union in 1939, the city was first captured by the Wehrmacht and soon passed on to the USSR in accordance with the German–Soviet Frontier Treaty. In 1941, it was retaken by the Germans during Operation Barbarossa. The city was part of the Belarusian SSR until the breakup of the USSR in 1991. Brest is now a part of the independent Belarus.

Several theories attempt to explain the origin of the city's name. It may have come from the Slavic root ''beresta'' meaning "birch", or "bark". The name could also originate from the Slavic root ''berest'' meaning "elm". Or it could have come from the Lithuanian word ''brasta'' meaning "ford". Once a center of Jewish scholarship, the city has the Yiddish name (), hence the term "Brisker" used to describe followers of the influential Soloveitchik family of rabbis. Traditionally, Belarusian-speakers called the city (). Brest became a part of the Grand Duchy of Lithuania in 1319. In the Polish–Lithuanian Commonwealth formed in 1569 the town became known in Polish as , historically (literally: "Lithuanian Brest", in contradistinction to Brześć Kujawski). became part of the Russian Empire under the name or (russian: Брест-Литовск, , literally "Lithuanian Brest") in the course of the Third Partition of the Polish-Lithuanian Commonwealth in 1795. After World War I, and the rebirth of Poland in 1918, the government of the Second Polish Republic renamed the city as ("Brest on the Bug") on March 20, 1923. After World War II the city became part of the Byelorussian Soviet Socialist Republic with the name simplified as Brest. Brest's coat of arms, adopted on January 26, 1991, features an arrow pointed upwards and a bow (both silver) on a sky-blue shield. An alternative coat of arms has a red shield. Sigismund II Augustus, King of Poland and Grand Duke of Lithuania, first granted Brest a coat of arms in 1554. 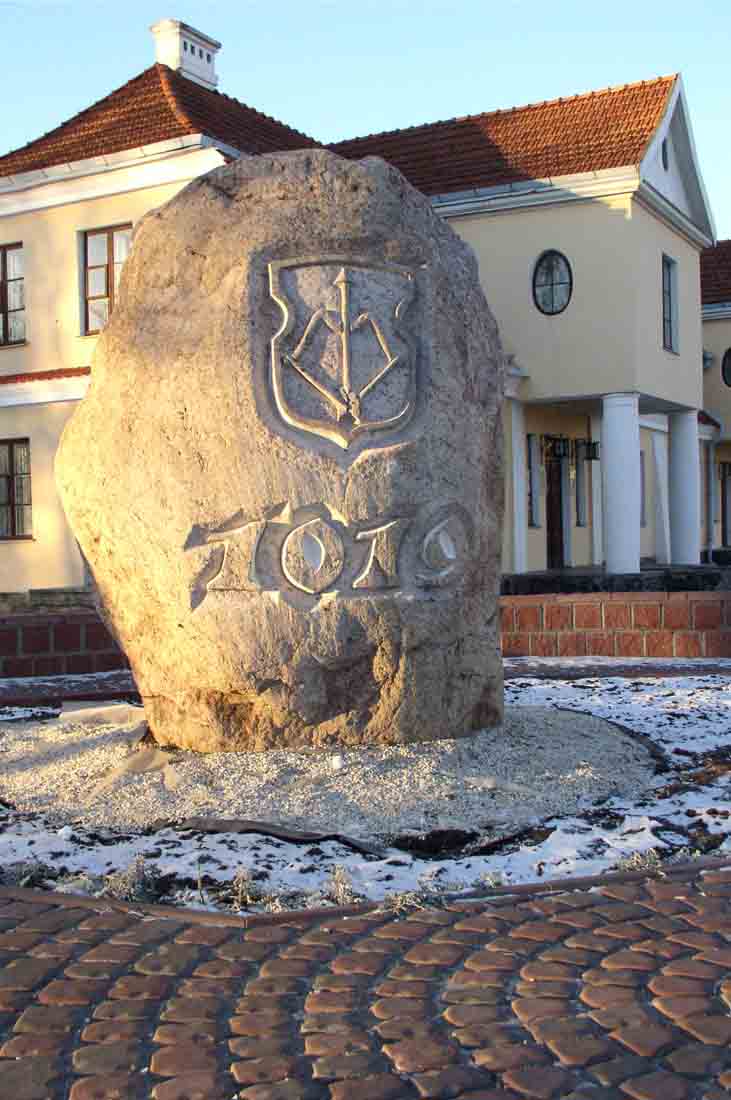 The city was founded by the Slavs. As a town, Brest – ''Berestye'' in Kievan Rus – was first mentioned in the ''Primary Chronicle'' in 1019 when the Kievan Rus took the stronghold from the Poles. It is one of the oldest cities in Belarus. It was hotly contested between the Polish rulers (kings, principal dukes and dukes of Masovia) and Kievan Rus princes, laid waste by the Mongols in 1241 (see: First Mongol invasion of Poland), and was not rebuilt until 1275. Later it was part of the territory of the Grand Duchy of Lithuania.

In the Grand Duchy of Lithuania

In 1390 Brest became the first city in the lands that now are Belarus to receive Magdeburg rights. In 1419 it became a seat of the starost in the newly created Trakai Voivodeship.

Its suburbs were burned by the Teutonic Knights in 1379. In 1409 it was a meeting place of King Władysław II Jagiełło, Grand Duke Vytautas the Great and a Tatar khan under the Archbishop Mikołaj Trąba's initiative, to prepare for war with the Teutonic Knights. In 1410 the town mustered a cavalry banner that participated in the Polish-Lithuanian victory at the battle of Grunwald.

= In 1500 it was burned again by Crimean Tatars. In 1566, following the decree of Sigismund II Augustus, a new voivodeship was created - Brest Litovsk Voivodeship. During the union of the Polish–Lithuanian Commonwealth and Sweden under king Sigismund III Vasa (Polish–Swedish union), diets were held there. In 1594 and 1596 it was the meeting-place of two remarkable councils of regional bishops of the Roman-Catholic Church and Eastern Orthodox Church. The 1596 council established the Uniate Church (known also as the Belarusian Greek Catholic Church in Belarus and Ukrainian Greek Catholic Church in Ukraine).

In 1657, and again in 1706, the town and castle were captured by the Swedes during their invasions of the Polish-Lithuanian Commonwealth. In an attack from the other direction, on January 13, 1660 the invading Muscovite army under Ivan Andreyevich Khovansky took the Brest Castle in an early morning surprise attack, the town having been captured earlier, and massacred the 1,700 defenders and their families (according to an Austrian observer, Captain Rosestein).

On July 23, 1792 a battle was fought between the regiments of the Grand Duchy of Lithuania defending the town and the invading Russian Imperial Army. On September 19, 1794 the area between Brest and Terespol was the site of a battle won by the invading Russian Imperial army led by Suvorov over a Polish-Lithuanian division under General Karol Sierakowski. Thereafter, Brest was annexed by Russia when the Poland-Lithuania Commonwealth was partitioned for the third time in 1795.

During Russian rule in the 19th century, Brest Fortress was built in and around the city. The Russians demolished the Polish Royal Castle and most of the Old Town "to make room" for the fortress.

During World War I, the town was captured by the Imperial German Army on August 25, 1915, during the Great Retreat of 1915. Shortly after Brest fell into German hands, war poet August Stramm, who has been called "the first of the Expressionists" and one of, "the most innovative poets of the First World War," was shot in the head during an attack on nearby Russian positions on September 1 1915. In March 1918, in the Brest Fortress on the western outskirts of Brest at the confluence of the Bug River and Mukhavets Rivers, the Treaty of Brest-Litovsk was signed, ending the war between Soviet Russia and the Central Powers and transferring the city and its surrounding region to the sphere of influence of the German Empire. This treaty was subsequently annulled by the treaties which ended the war and even more so by events and developments in Germany and Eastern Europe. During 1918, the city became a part of the Podolia Governorate of the Ukrainian People's Republic as a result of negotiations and own treaty between delegation of the Ukrainian Central Rada and Central Powers.

Following the Polish–Soviet War Brest became part of the Second Polish Republic, with borders formally recognized by the Treaty of Riga of 1921. It was renamed Brześć nad Bugiem on March 20, 1923 (''Brest on the Bug'') in Poland, and named the capital of the Polesie Voivodeship in accordance with the pre-1795 tradition. In the twenty years of Poland's sovereignty, of the total of 36 brand new schools established in the city, there were ten public, and five private Jewish schools inaugurated, with Yiddish and Hebrew as the language of instruction. The first ever Jewish school in Brześć history opened in 1920, almost immediately after Poland's return to independence. In 1936 Jews constituted 41.3% of the Brześć population, or 21,518 citizens. Some 80.3% of private enterprises were run by Jews. The Polish Army troops of the 9th Military District along with its headquarters were stationed in Brest Fortress. During the German Invasion of Poland in 1939 the city was defended by a small garrison of four infantry battalions under General Konstanty Plisowski against the XIX Panzer Corps of General Heinz Guderian. After four days of heavy fighting the Polish forces withdrew southwards on September 17 (see: Battle of Brześć Litewski). The Soviet invasion of Poland began on the same day and as a result the Soviet Red Army entered the city at the end of September 1939 in accordance with the Ribbentrop-Molotov pact's Secret Protocol, and a joint Nazi-Soviet military parade took place on September 22, 1939. While Belarusians consider it a reunification of the Belarusian nation under one constituency (BSSR at that time), Poles consider it the date when the city was lost. During the Soviet control (1939–41) the Polish population was subject to arrests, executions and mass deportations to Siberia and the Soviet Republic of Kazakhstan. The city had an overwhelmingly Jewish population in the Russian Partition: 30,000 out of 45,000 total population according to Russian 1897 census, which fell to 21,000 out of 50,000 according to the Polish census of 1931.