Brendan Francis Aidan Behan (christened Francis Behan) ( ; ga|Breandán Ó Beacháin; 9 February 1923 – 20 March 1964) was an Irish poet, short story writer, novelist and playwright who wrote in both English and Irish. He was named by Irish Central as one of the greatest Irish writers of all time. An Irish republican and a volunteer in the Irish Republican Army, Behan was born in Dublin into a staunchly republican family becoming a member of the IRA's youth organisation Fianna Éireann at the age of fourteen. There was also a strong emphasis on Irish history and culture in the home, which meant he was steeped in literature and patriotic ballads from an early age. Behan eventually joined the IRA at sixteen, which led to his serving time in a borstal youth prison in the United Kingdom and he was also imprisoned in Ireland. During this time, he took it upon himself to study and he became a fluent speaker of the Irish language. Subsequently released from prison as part of a general amnesty given by the Fianna Fáil government in 1946, Behan moved between homes in Dublin, Kerry and Connemara, and also resided in Paris for a time. In 1954, Behan's first play ''The Quare Fellow'', was produced in Dublin. It was well received; however, it was the 1956 production at Joan Littlewood's Theatre Workshop in Stratford, London, that gained Behan a wider reputation. This was helped by a famous drunken interview on BBC television with Malcolm Muggeridge. In 1958, Behan's play in the Irish language ''An Giall'' had its debut at Dublin's Damer Theatre. Later, ''The Hostage'', Behan's English-language adaptation of ''An Giall'', met with great success internationally. Behan's autobiographical novel, ''Borstal Boy'', was published the same year and became a worldwide best-seller and by 1955, Behan had married Beatrice ffrench Salkeld, with whom he later had a daughter Blanaid Behan in 1963. By the early 1960s, Behan reached the peak of his fame. He spent increasing amounts of time in New York City, famously declaring, "To America, my new found land: The man that hates you hates the human race." By this point, Behan began spending time with people including Harpo Marx and Arthur Miller and was followed by a young Bob Dylan. However, this newfound fame did nothing to aid his health or his work, with his alcoholism and diabetes medical conditions continuing to deteriorate: ''Brendan Behan's New York'' and ''Confessions of an Irish Rebel'' received little praise. He briefly attempted to combat this by a dry stretch while staying at Chelsea Hotel in New York, but once again turned back to alcohol and relapsed back into active alcoholism. Behan died on 20 March 1964 after collapsing at the Harbour Lights bar in Dublin. He was given a full IRA guard of honour, which escorted his coffin. It was described by several newspapers as the biggest Irish funeral of all time after those of Michael Collins and Charles Stewart Parnell. 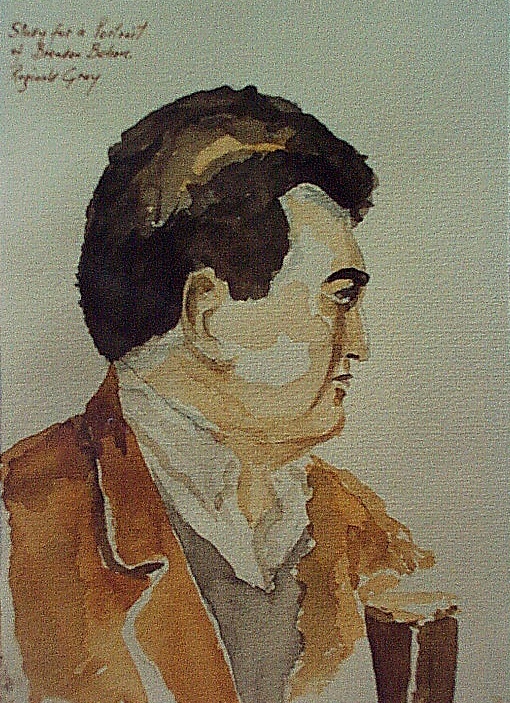 Behan was born in the inner city of Dublin at Holles Street Hospital on 9 February 1923 into an educated working-class family. He lived in a house on Russell Street near Mountjoy Square owned by his grandmother, Christine English, who owned a number of properties in the area. Brendan's father Stephen Behan, a house painter who had been active in the Irish War of Independence, read classic literature to the children at bedtime from sources including Zola, Galsworthy, and Maupassant; his mother, Kathleen, took them on literary tours of the city. If Behan's interest in literature came from his father, his political beliefs came from his mother. She remained politically active all her life and was a personal friend of the Irish republican Michael Collins. Brendan Behan wrote a lament to Collins, "The Laughing Boy", at the age of thirteen. The title was from the affectionate nickname Mrs. Behan gave to Collins. Kathleen published her autobiography, "Mother of All The Behans", a collaboration with her son Brian, in 1984. Behan's uncle Peadar Kearney wrote the Irish national anthem "The Soldier's Song".