Borneo (; id|Kalimantan) is the third-largest island in the world and the largest in Asia. At the geographic centre of Maritime Southeast Asia, in relation to major Indonesian islands, it is located north of Java, west of Sulawesi, and east of Sumatra. The island is politically divided among three countries: Malaysia and Brunei in the north, and Indonesia to the south. It is the only island in the world to be politically administered by three countries at a time. Approximately 73% of the island is Indonesian territory. In the north, the East Malaysian states of Sabah and Sarawak make up about 26% of the island. Additionally, the Malaysian federal territory of Labuan is situated on a small island just off the coast of Borneo. The sovereign state of Brunei, located on the north coast, comprises about 1% of Borneo's land area. A little more than half of the island is in the Northern Hemisphere including Brunei and the Malaysian portion, while the Indonesian portion spans both the Northern and Southern hemispheres. Borneo is home to one of the oldest rainforests in the world. In August 2019, Indonesian president Joko Widodo announced a plan to move the capital of Indonesia from Jakarta to a newly established location in the East Kalimantan province in Borneo.

The island is known by many names. Internationally it is known as ''Borneo'', derived from European contact with the Brunei kingdom in the 16th century during the Age of Exploration. It is very clear on a map from around 1601 that Brunei city is referred to as Borneo, and the whole island is also labelled Borneo. The name ''Borneo'' may derive from the Sanskrit word ' (), meaning either "water" or Varuna, the Hindu god of rain. The local population called it ''Klemantan'' or ''Kalimantan,'' which was derived from the Sanskrit word ''Kalamanthana,'' meaning "burning weather" possibly to describe its hot and humid tropical weather. Indonesian historian Slamet Muljana suggests that the name ''Kalamanthana'' was derived from Sanskrit terms ''kala'' (time or season) and ''manthana'' (churning, kindling or creating fire by friction), which possibly describes the heat of the weather. In earlier times, the island was known by other names. In 977, Chinese records began to use the term ''Bo-ni'' to refer to Borneo. In 1225, it was also mentioned by the Chinese official Chau Ju-Kua (趙汝适). The Javanese manuscript Nagarakretagama, written by Majapahit court poet Mpu Prapanca in 1365, mentioned the island as ''Nusa Tanjungnagara'', which means the island of the Tanjungpura Kingdom. Nevertheless, the same manuscript also mentioned ''Barune'' (Brunei) and other polities on the island.

Borneo was formed through Mesozoic accretion of microcontinental fragments, ophiolite terranes and island arc crust onto a Paleozoic continental core. At the beginning of the Cenozoic Borneo formed a promontory of Sundaland which partly separated from Asian mainland by the proto-South China Sea. The oceanic part of the proto-South China Sea was subducted during the Paleogene period and a large accretionary complex formed along the northwestern of the island of Borneo. In the early Miocene uplift of the accretionary complex occurred as a result of underthrusting of thinned continental crust in northwest. The uplift may have also resulted from shortening due to the counter-clockwise rotation of Borneo between 20 and 10 mega-annum (Ma) as a consequence of Australia-Southeast Asia collision. Large volumes of sediment were shed into basins, which scattered offshore to the west, north and east of Borneo as well into·a Neogene basin which is currently exposed in large areas of eastern and southern Sabah. In southeast Sabah, the Miocene to recent island arc terranes of the Sulu Archipelago extend onshore into Borneo with the older volcanic arc was the result of southeast dipping subduction while the younger volcanics are likely resulted from northwest dipping subduction the Celebes Sea. 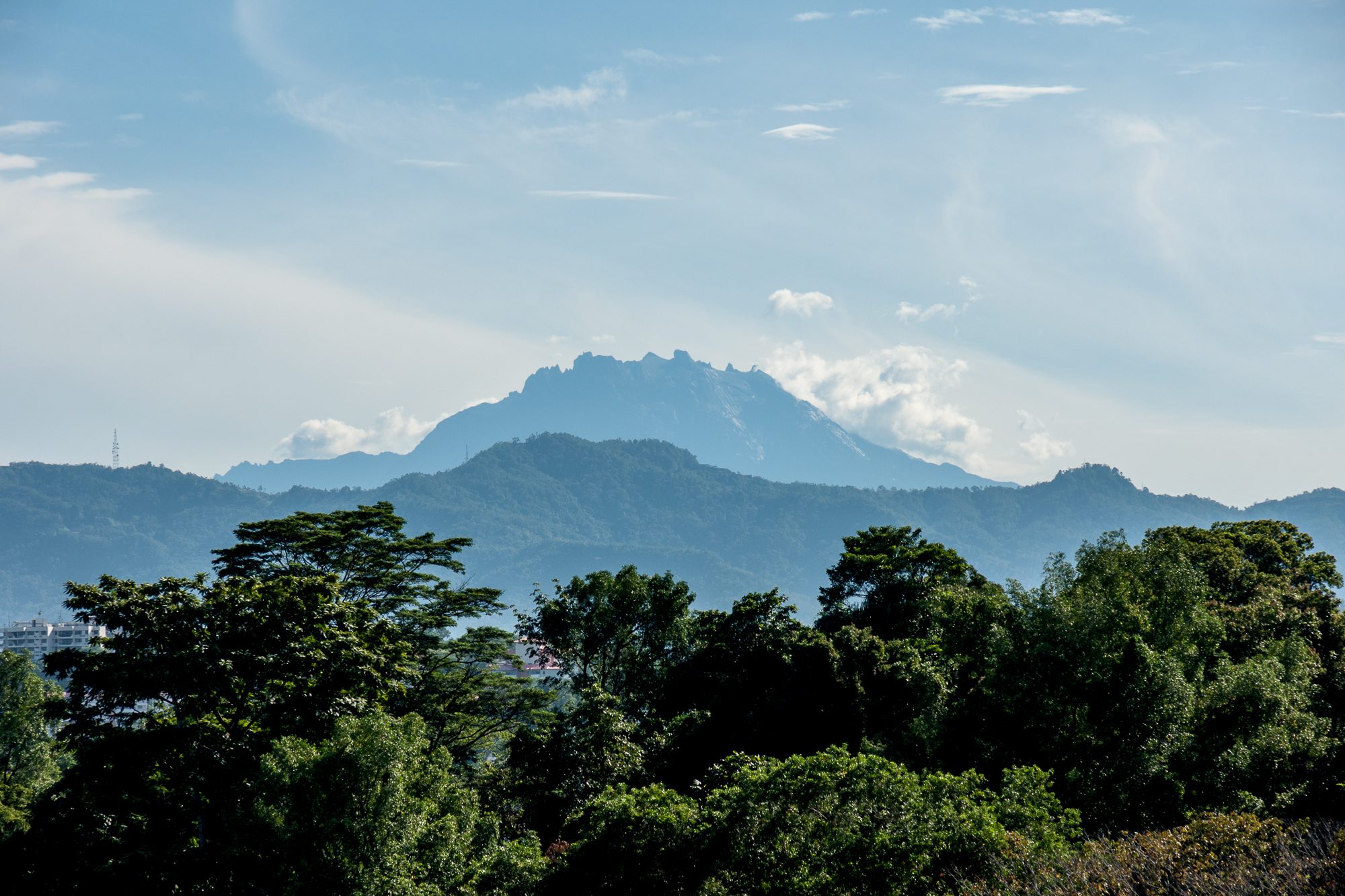 Before sea levels rose at the end of the last Ice Age, Borneo was part of the mainland of Asia, forming, with Java and Sumatra, the upland regions of a peninsula that extended east from present day Indochina. The South China Sea and Gulf of Thailand now submerge the former low-lying areas of the peninsula. Deeper waters separating Borneo from neighbouring Sulawesi prevented a land connection to that island, creating the divide known as Wallace's Line between Asian and Australia-New Guinea biological regions. The island today is surrounded by the South China Sea to the north and northwest, the Sulu Sea to the northeast, the Celebes Sea and the Makassar Strait to the east, and the Java Sea and Karimata Strait to the south. To the west of Borneo are the Malay Peninsula and Sumatra. To the south and east are islands of Indonesia: Java and Sulawesi, respectively. To the northeast are the Philippine Islands. With an area of , it is the third-largest island in the world, and is the largest island of Asia (the largest continent). Its highest point is Mount Kinabalu in Sabah, Malaysia, with an elevation of . 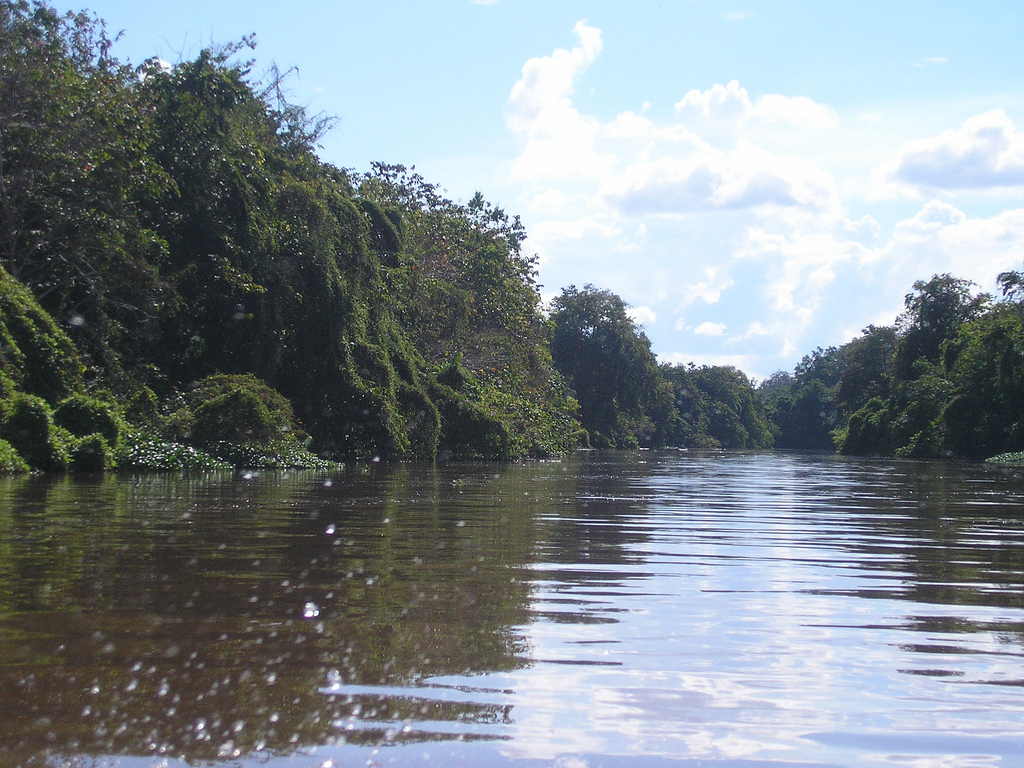 The largest river system is the Kapuas in West Kalimantan, with a length of . Other major rivers include the Mahakam in East Kalimantan ( long), the Barito, Kahayan, and Mendawai in South Kalimantan (, , and long respectively), Rajang in Sarawak ( long) and Kinabatangan in Sabah ( long). Borneo has significant cave systems. In Sarawak, the Clearwater Cave has one of the world's longest underground rivers while Deer Cave is home to over three million bats, with guano accumulated to over deep. The Gomantong Caves in Sabah has been dubbed as the "Cockroach Cave" due to the presence of millions of cockroaches inside the cave. The Gunung Mulu National Park in Sarawak and Sangkulirang-Mangkalihat Karst in East Kalimantan which particularly a karst areas contains thousands of smaller caves. 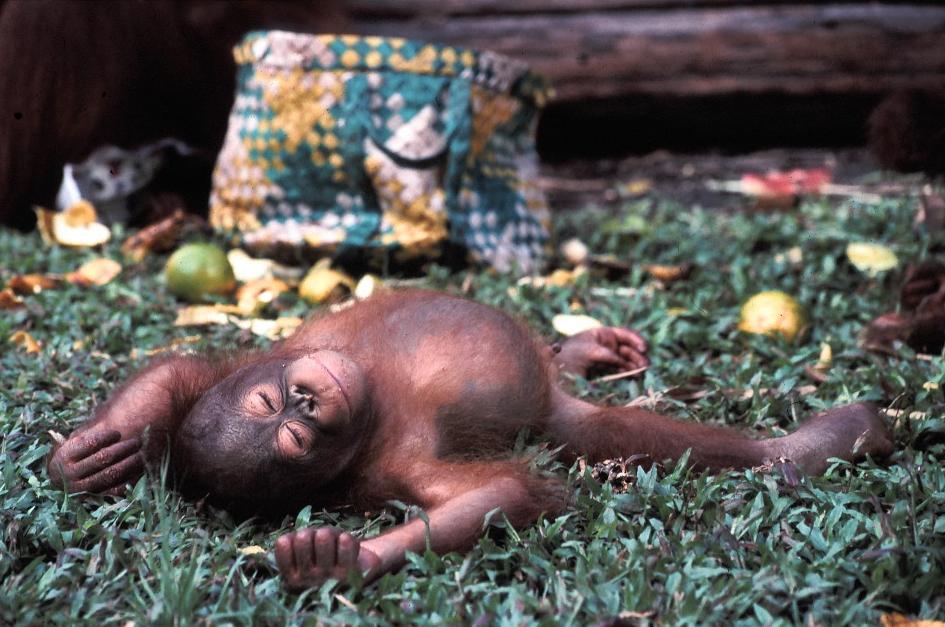 The Borneo rainforest is estimated to be around 140 million years old, making it one of the oldest rainforests in the world. It is the centre of the evolution and distribution of many endemic species of plants and animals, and the rainforest is one of the few remaining natural habitats for the endangered Bornean orangutan. It is an important refuge for many endemic forest species, including the Borneo elephant, the eastern Sumatran rhinoceros, the Bornean clouded leopard, the hose's palm civet and the dayak fruit bat. 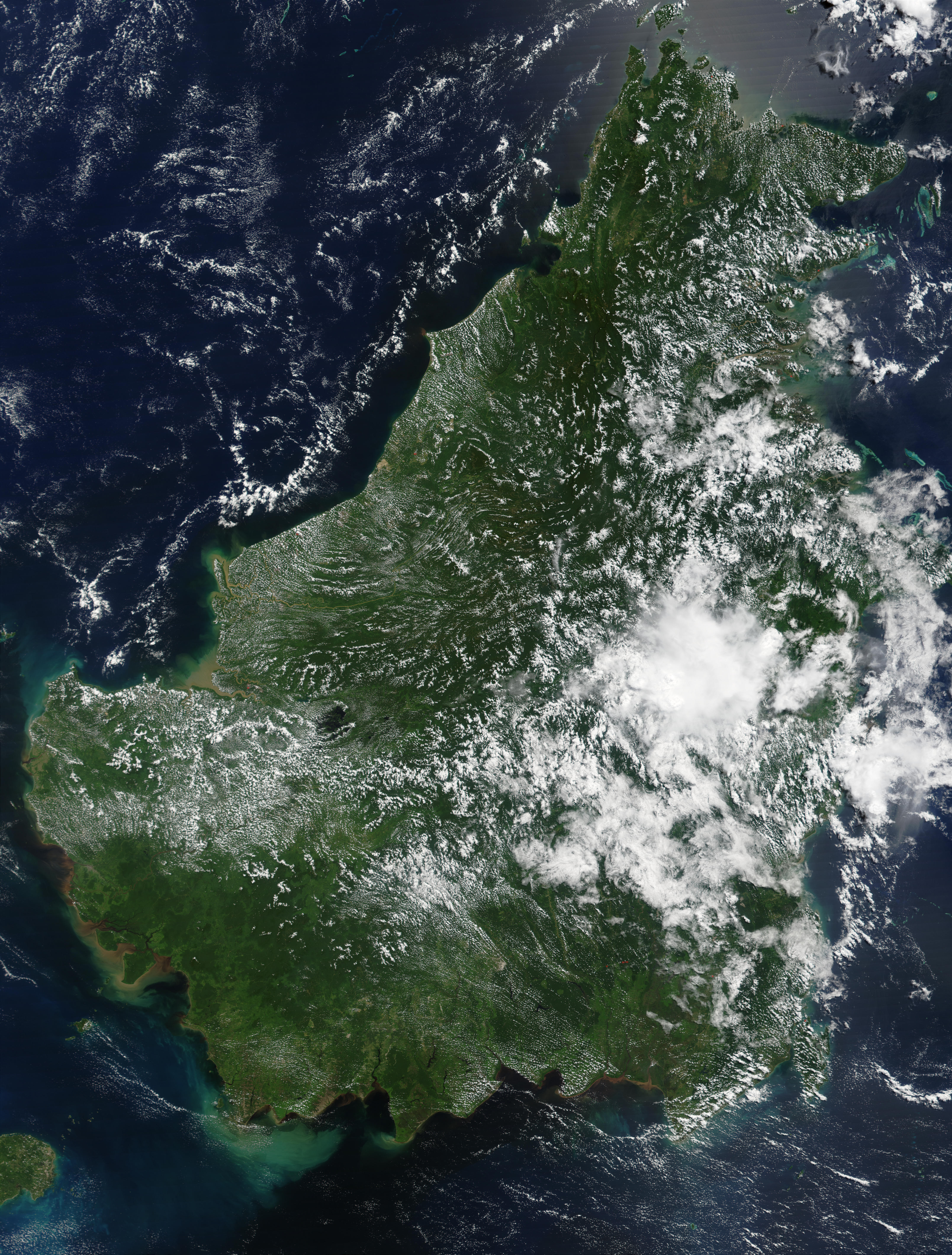 Peat swamp forests occupy the entire coastline of Borneo. The soil of the peat swamp is comparatively infertile, while it is known to be the home of various bird species such as the hook-billed bulbul, helmeted hornbill and rhinoceros hornbill. There are about 15,000 species of flowering plants with 3,000 species of trees (267 species are dipterocarps), 221 species of terrestrial mammals and 420 species of resident birds in Borneo. There are about 440 freshwater fish species in Borneo (about the same as Sumatra and Java combined). The Borneo river shark is known only from the Kinabatangan River. In 2010, the World Wide Fund for Nature (WWF) stated that 123 species have been discovered in Borneo since the "Heart of Borneo" agreement was signed in 2007. The WWF has classified the island into seven distinct ecoregions. Most are lowland regions: * Borneo lowland rain forests cover most of the island, with an area of ; * Borneo peat swamp forests; * ''Kerangas'' or Sundaland heath forests; * Southwest Borneo freshwater swamp forests; and * Sunda Shelf mangroves. * The Borneo montane rain forests lie in the central highlands of the island, above the elevation. *The Tropical and subtropical grasslands, savannas, and shrublands on South Kalimantan. The highest elevations of Mount Kinabalu are home to the Kinabalu mountain alpine meadow, an alpine shrubland notable for its numerous endemic species, including many orchids. According to analysis of data from Global Forest Watch, the Indonesian portion of Borneo lost 10.7 million hectares of tree cover between 2002 and 2019, of which 4 million hectares was primary forest, compared with Malaysian Borneo's 4.4 million hectares of tree cover loss and 1.9 million hectares of primary forest cover loss. As of 2020, Indonesian Borneo accounts for 72% of the island's tree cover, Malaysian Borneo 27%, and Brunei 1%. Primary forest in Indonesia accounts for 44% of Borneo's overall tree cover. 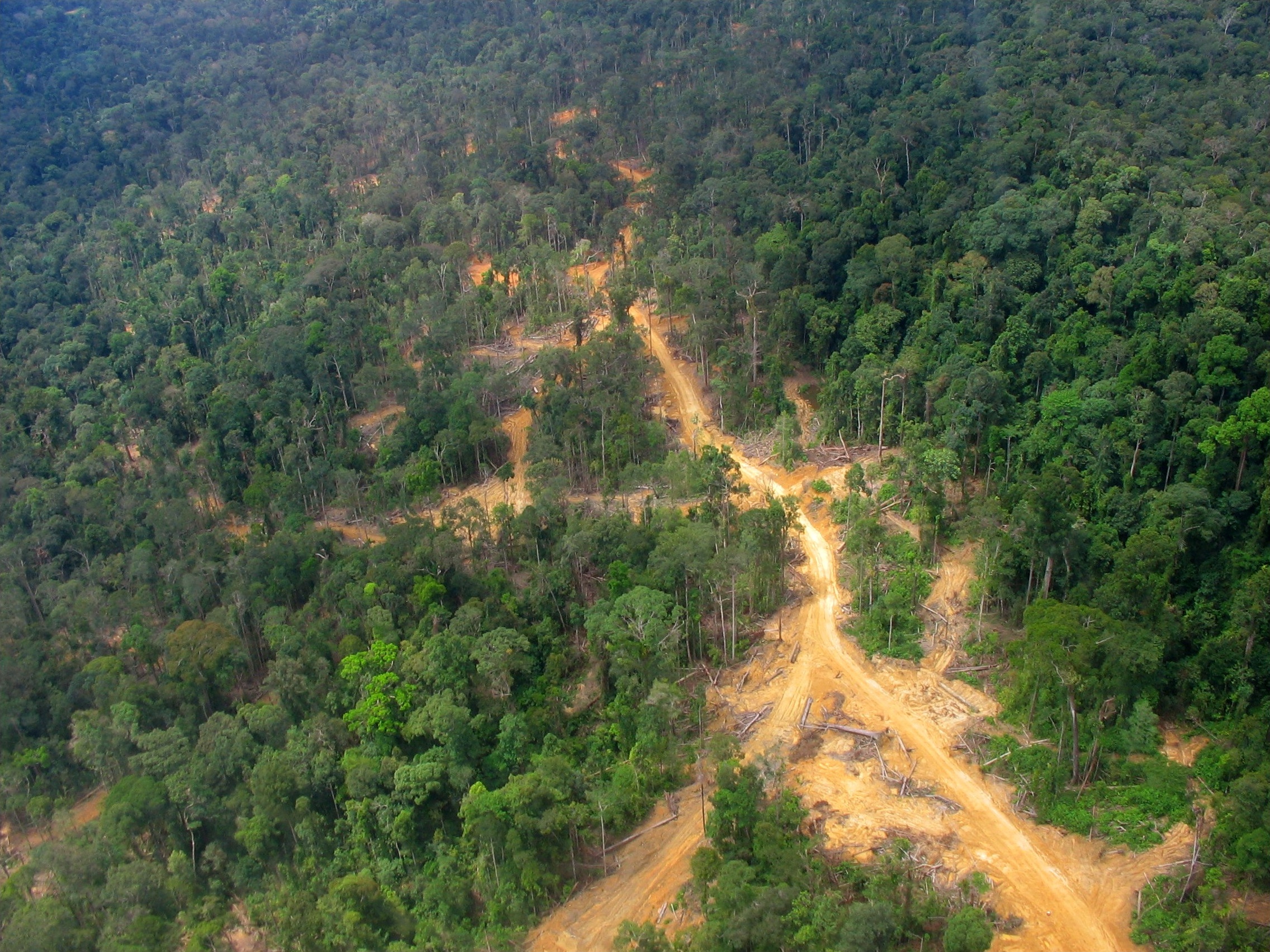 The island historically had extensive rainforest cover, but the area was reduced due to heavy logging by the Indonesian and Malaysian wood industry, especially with the large demands of raw materials from industrial countries along with the conversion of forest lands for large-scale agricultural purposes. Half of the annual global tropical timber acquisition comes from Borneo. Palm oil plantations have been widely developed and are rapidly encroaching on the last remnants of primary rainforest. Forest fires since 1997, started by the locals to clear the forests for plantations were exacerbated by an exceptionally dry El Niño season, worsening the annual shrinkage of the rainforest. During these fires, hotspots were visible on satellite images and the resulting haze frequently affected Brunei, Indonesia and Malaysia. The haze could also reach southern Thailand, Cambodia, Vietnam and the Philippines as evidenced on the 2015 Southeast Asian haze.The orchid Mycaranthes farinosa is specific to this island

In November 2018, scientists reported the discovery of the oldest known figurative art painting, over 40,000 (perhaps as old as 52,000) years old, of an unknown animal, in the cave of Lubang Jeriji Saléh on the island of Borneo. According to ancient Chinese (977), Indian and Japanese manuscripts, western coastal cities of Borneo had become trading ports by the first millennium AD. In Chinese manuscripts, gold, camphor, tortoise shells, hornbill ivory, rhinoceros horn, crane crest, beeswax, lakawood (a scented heartwood and root wood of a thick liana, ''Dalbergia parviflora''), dragon's blood, rattan, edible bird's nests and various spices were described as among the most valuable items from Borneo. The Indians named Borneo ''Suvarnabhumi'' (the land of gold) and also ''Karpuradvipa'' (Camphor Island). The Javanese named Borneo ''Puradvipa'', or Diamond Island. Archaeological findings in the Sarawak river delta reveal that the area was a thriving centre of trade between India and China from the 6th century until about 1300. Stone pillars bearing inscriptions in the Pallava script, found in Kutai along the Mahakam River in East Kalimantan and dating to around the second half of the 4th century, constitute some of the oldest evidence of Hindu influence in Southeast Asia. By the 14th century, Borneo became a vassal state of Majapahit (in present-day Indonesia), later changing its allegiance to the Ming dynasty of China. The religion of Islam entered the island in the 10th century, following the arrival of Muslim traders who later converted many indigenous peoples in the coastal areas. The Sultanate of Brunei declared independence from Majapahit following the death of Majapahit Emperor in mid-14th century. During its golden age under Bolkiah from the 15th century to the 17th century, the Bruneian Empire ruled almost the entire coastal area of Borneo (lending its name to the island due to its influence in the region) and several islands in the Philippines.