The Borgia Apartments are a suite of rooms in the Apostolic Palace in the Vatican, adapted for personal use by Pope Alexander VI (Rodrígo de Borgia). In the late 15th century, he commissioned the Italian painter Bernardino di Betto (Pinturicchio) and his studio to decorate them with frescos. The paintings and frescoes, which were executed between 1492 and 1494, drew on a complex iconographic program that used themes from medieval encyclopedias, adding an eschatological layer of meaning and celebrating the supposedly divine origins of the Borgias. Recent cleaning of Pinturicchio's fresco ''The Resurrection'' has revealed a scene believed to be the earliest known European depiction of Native Americans, painted just two years after Christopher Columbus returned from the New World. 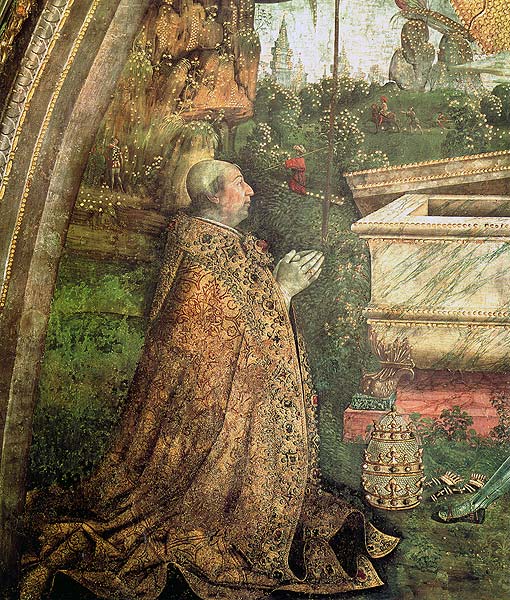 When the Borgia family fell out of favor after the 1503 death of Pope Alexander VI, the apartments were little used for centuries. Only in 1889 did Pope Leo XIII have the rooms restored and opened for public viewing. The works in the apartment are now considered part of the Vatican Library. Most of the rooms are now used for the Vatican Collection of Modern Religious Art, inaugurated by Pope Paul VI in 1973. The collection includes about 600 accumulated works of painting, sculpture and graphic art; donations of contemporary Italian and foreign artists and includes works by Paul Gauguin, Marc Chagall, Paul Klee, Salvador Dalí, and Wassily Kandinsky. The upper part of the walls and vaults, covered with paintings, are further enriched with delicate stucco work in relief.