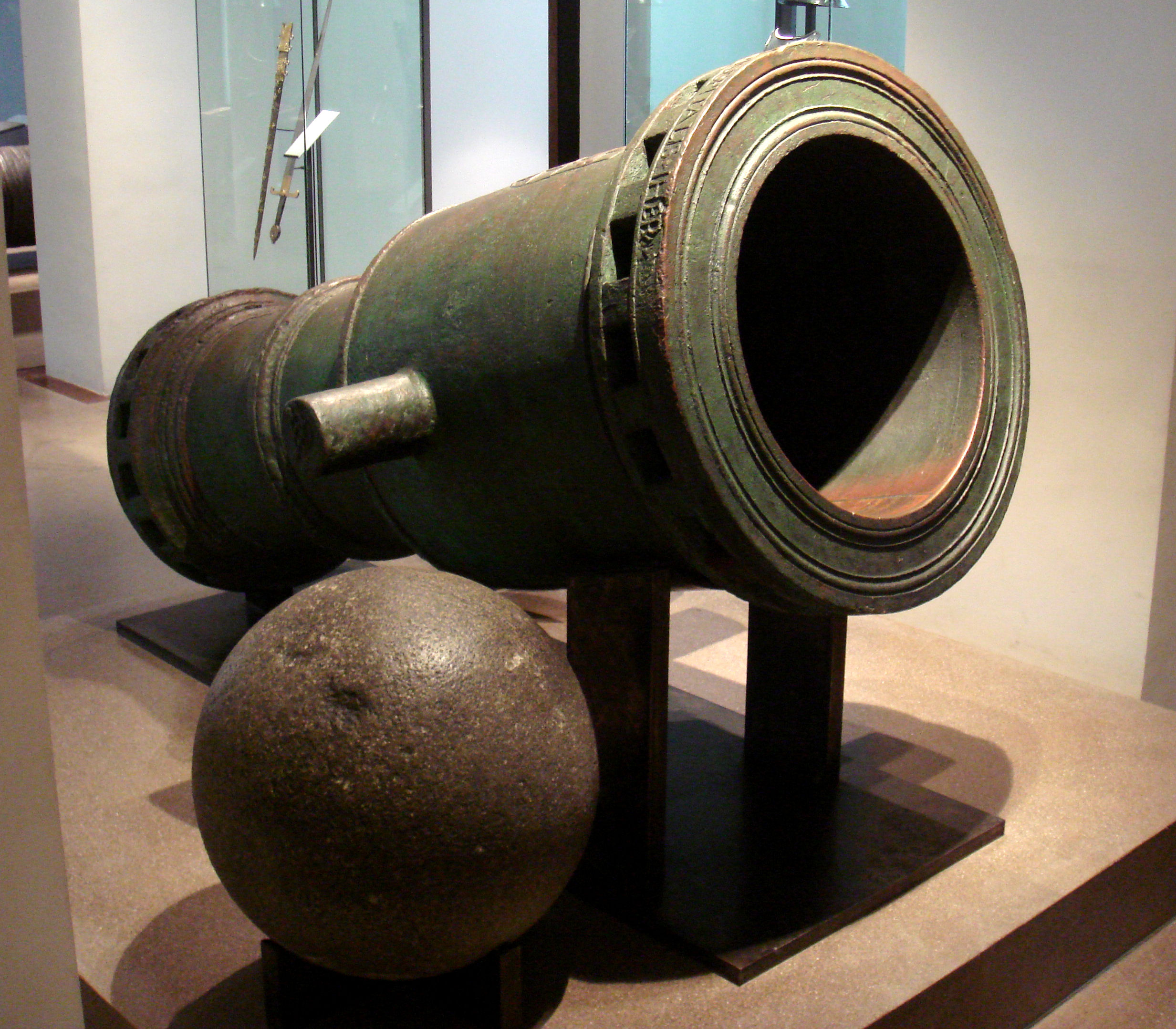 The bombard is a type of cannon or mortar which was used throughout the Middle Ages and the early modern period. Bombards were mainly large calibre, muzzle-loading artillery pieces used during sieges to shoot round stone projectiles at the walls of enemy fortifications, enabling troops to break in. Most bombards were made of iron and used gunpowder to launch the projectiles. There are many examples of bombards, including Mons Meg, the Dardanelles Gun, and the handheld bombard. The weapon provided the name to the Royal Artillery rank of bombardier and the word bombardment.

The term "bombard" was first used to describe guns of any kind from the early to mid-14th century, but it was later applied primarily to large cannons during the 14th to 15th centuries. Despite its strong association with large cannons, there is no standard size for bombards, and the term has been applied to cannons only a meter in length as well as cannons several meters long weighing up to 20 tonnes.

The oldest representation of a bombard can be found in the Dazu Rock Carvings. In 1985, the Canadian historian Robin Yates was visiting Buddhist cave temples when he saw a sculpture on the wall depicting a demon firing a hand-held bombard. The sculpture was later dated to the early 12th century. The 'Vaso' shown by Walter de Milamete (see Gunpowder artillery in the Middle Ages) is usually dated to 1327 and shows a mailed knight firing a brass fire pot. However the armour shown appears anachronistic for 1327 and the image may actually be a copy of a lost 12th century image. Early bombards also include two Chinese c. 1377 cast-iron mortars weighing over 150 kg, each with 4 trunnions on their barrels. England certainly began using cannons in the early 14th century. Field artillery was deployed by King Edward III at the Battle of Crecy in 1346 but equipment which may have been an artillery piece was listed as captured on a French ship by the English, at Sluys, as early as 1340. Inverted 'keyhole' gun loops at Bodiam Castle, Cooling Castle and Westgate Canterbury have all been identified as for firing heavy handguns. These defences are dated 1380–1385. Initially used as defensive weapons primitive bombards began to be used as siege weapons in the later 14th century. Henry IV, Henry V, and James II won battles with the use of bombards. Henry V captured Harfleur with bombards in 1415. King Henry's army later came under artillery fire at the Battle of Agincourt. James II destroyed many castles with his one and a half ton cannon named "The Lion". The French re-conquest of their kingdom from English control saw the use of considerable French artillery in the siege role. The French in this period preferred to avoid attacking English longbowmen in open battle and relied on siege and re-conquest by siege tactics. However the last battle of the Hundred Years' War saw English commander John Talbot lead an Anglo-Gascon army against dug-in French troops equipped with 300 pieces of artillery at the Battle of Castillion in 1453. The French camp had been laid out by ordnance officer Jean Bureau to maximise the French artillery arm. The Anglo-Gascons were shot to pieces and Talbot was eventually killed. Most bombards started with the construction of a wooden core surrounded by iron bars. Then, iron hoops were driven over these bars in order to surround and cover them. The whole structure was then welded with a hammer while it was still hot at about 1300 °C (2350 °F). The rings then subsequently cooled and formed over the bars to secure them. The last step was to incinerate the wooden core and to attach a one-piece cast. The complicated procedure required a highly skilled forge who could work quickly and precisely with a hammer.

A notable example of a bombard is the large Mons Meg weapon, built around 1449 and used by King James II of Scotland. It was very powerful and used for bringing down castle walls. The origins of the Mons Meg are not fully known but according to Philip the Good, Duke of Burgundy, it was his idea. It was ordered around 1449 and had similar construction to a typical bombard. However, the Mons Meg was seldom used because of several factors. Mons Meg was capable of firing 180 kg (396 lb) shots and was one of the largest bombards in its time. It is now housed on public display at Edinburgh Castle. A bombard with a bore of approximately 12 inches was found when the moat of Bodiam Castle, Kent, was drained. A muzzle-loader of hoop-and-stave construction, it is believed to be the oldest piece found in England and may be late 14th or very early 15th century. It was possibly dumped in the moat following an abortive siege at the castle during the Wars of the Roses. The original is now at the Royal Artillery Museum at Woolwich, but a copy has been on show at the castle for many years. The Star Gun Company has built a Bodiam Bombard replica while local newspapers report a replica was being fired at the castle for visitors during 2012. Other known 15th-century very large-calibre guns include the wrought-iron Pumhart von Steyr and Dulle Griet as well as the cast-bronze Faule Mette, Faule Grete, and Grose Bochse. The Tsar Cannon is a late 16th-century show-piece. The Dardanelles Gun, built in the Ottoman Empire in 1464 by Munir Ali, with a weight of 18.6 t and a length of 518 cm, was capable of firing stone balls of up to 63 cm diameter. The Tsar Cannon, built in 1586 and today located on the grounds of the Moscow Kremlin, is the largest bombard ever built. Eventually bombards were superseded by weapons using smaller calibre iron projectiles fired from longer barrels with more powerful gunpowder.