Click Here for Items Related To - Board of Trade 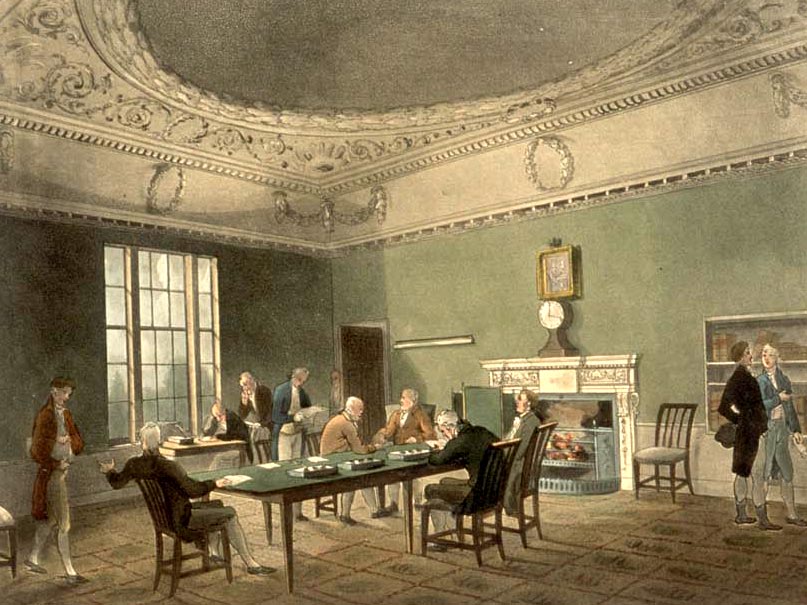 The Board of Trade is a British government body concerned with commerce and industry, currently within the Department for International Trade. Its full title is The Lords of the Committee of the Privy Council appointed for the consideration of all matters relating to Trade and Foreign Plantations, but is commonly known as the Board of Trade, and formerly known as the Lords of Trade and Plantations or Lords of Trade, and it has been a committee of the Privy Council of the United Kingdom. The board has gone through several evolutions, beginning with extensive involvement in colonial matters in the 17th Century, to powerful regulatory functions in the Victorian Era, to virtually being dormant in the last third of 20th century. In 2017, it was revitalised as an advisory board headed by the International Trade Secretary who has nominally held the title of President of the Board of Trade, and who at present is the only privy counsellor of the board, the other members of the present board filling roles as advisers. The board was first established as a temporary committee of England's Privy Council to advise on colonial (plantation) questions in the early 17th century, when these settlements were initially forming. The board would evolve gradually into a government department with considerable power and a diverse range of functions, including regulation of domestic and foreign commerce, the development, implementation and interpretation of the Acts of Trade and Navigation, and the review and acceptance of legislation passed in the colonies. Between 1696 and 1782 the Board of Trade, in partnership with the various secretaries of state over that time, held responsibility for colonial affairs, particularly in British America. The newly created office of Home Secretary then held colonial responsibility until 1801, when the Secretary of State for War and the Colonies was established. Between 1768 and 1782 while with the Secretary of State for the Colonies, whose secretaryship was held jointly with the presidency of the Board of Trade, the latter position remained largely vacant; this led to a diminished status of the board and it became an adjunct to the new department and ministry concerns. Following the loss of the American War of Independence, both the board and the short-lived secretaryship were dismissed by the king on 2 May 1782 and the board was abolished later by the Civil List and Secret Service Money Act 1782 (22 Geo. III, c 82). Following the Treaty of Paris 1783, with the continuing need to regulate trade between its remaining colonies, the independent United States and all other countries, a new Committee of Council on Trade and Plantations (later known as 'the First Committee') was established by William Pitt the Younger. Initially mandated by an Order in Council on 5 March 1784, the committee was reconstructed and strengthened by a second order, on 23 August 1786, under which it operated for the rest of its existence. The committee has been known as the Board of Trade since 1786, but this name was only officially adopted by an act of 1861. The new board's first functions were consultative like earlier iterations, and its concern with plantations, in matters such as the approval of colonial laws, more successfully accomplished. As the Industrial Revolution expanded, the board's work became increasingly executive and domestic. From the 1840s, a succession of acts of parliament gave it regulatory duties, notably concerning railways, merchant shipping, and joint-stock companies. This department was merged with the Ministry of Technology in 1970, to form the Department of Trade and Industry. The Secretary of State for Trade and Industry (from 2009 Secretary of State for Business, Innovation and Skills) was also President of the Board of Trade. The full board has met only once since the mid-20th century, during commemorations of the bicentenary of the board in 1986. In 2016, the role of President of the Board of Trade was transferred to the Secretary of State for International Trade. The board was reconstituted in October 2017.

In 1622, at the end of the Dutch Twelve Years' Truce, King James I directed the Privy Council of England to establish a temporary committee to investigate the causes of various economic and supply problems, the decline in trade and consequent financial difficulties; detailed instructions and questions were given, with answers to be given "as fast as the several points shall be duly considered by you." This would be followed by a number of temporary committees and councils to regulate the colonies and their commerce. The board's formal title remains "The Lords of the Committee of the Privy Council appointed for the consideration of all matters relating to Trade and Foreign Plantations". In 1634, Charles I appointed a new commission for regulating plantations. It was headed by the Archbishop of Canterbury with its primary goals to increase royal authority and the influence of the Church of England in the colonies, particularly with the great influx of Puritans to the New World. Soon after however, the English Civil Wars erupted and initiated a long period of political instability in England and the resultant loss of productivity for these committees. Between 1643 and 1648 the Long Parliament would establish a parliamentary Commission for Plantations to take the lead in colonial and commercial affairs. This period also saw the first regulation of royal tonnage and poundage and begin the modernization of customs and excise as growing sources of government revenue. During the Interregnum and Commonwealth three acts of the Rump Parliament in 1650 and 1651 are notable in the historical development of England's commercial and colonial programs. These include the first Commission of Trade to be established by an Act of Parliament on 1 August 1650. The instructions to the named commissioners, headed by Henry Vane the Younger, included consideration of both domestic and foreign trade, the trading companies, manufactures, free ports, customs, excise, statistics, coinage and exchange, and fisheries, as well as the plantations and the best means of promoting their welfare and rendering them useful to England. The act's statesmanlike and comprehensive instructions, along with an October act prohibiting trade with pro-royalist colonies and the Navigation Act of October 1651, formed the first definitive expression of England's commercial policy. They represent the first attempt to establish a legitimate control of commercial and colonial affairs, and the instructions indicate the beginnings of a policy which had the prosperity and wealth of England exclusively at heart. It was the Lords of Trade who, in 1675, originated the idea of transforming all of the colonies in America into Royal Colonies for the purpose of securing English trade against the French. They brought New Hampshire under the Crown, modified Penn's charter, refused a charter to the Plymouth colony, and taking advantage of the concessions of the charters of Massachusetts and New York, created the Dominion of New England in 1685, thereby transforming all the territory from the Kennebec to the Delaware into a single crown colony. In 1696, King William III appointed eight paid commissioners to promote trade in the American plantations and elsewhere. The Lords Commissioners of Trade and Foreign Plantations, appointed in 1696 and commonly known as the Lords of Trade, did not constitute a committee of the Privy Council, but were, in fact, members of a separate body. The board carried on this work but also had long periods of inactivity, devolving into chaos after 1761 and dissolved in 1782 by an act of Parliament by the Rockingham Whigs.

William Pitt the Younger re-established the committee in 1784, and an Order in Council of 23 August 1786 provided the formal basis that still remains in force. A secretariat was established which included the president, vice president and board members. By 1793, the board still remained in its old structure, with 20 members including the Archbishop of Canterbury. After 1820 the board ceased to meet regularly and the business was carried out entirely by the secretariat. The short name of "Board of Trade" was formalised in 1861. In the 19th century the board had an advisory function on economic activity in the UK and its empire. During the second half of the 19th century it also dealt with legislation for patents, designs and trademarks, company regulation, labour and factories, merchant shipping, agriculture, transport, power etc. Colonial matters passed to the Colonial Office and other functions were devolved to newly created departments, a process that continued for much of the 20th century. The original commission comprised the seven (later eight) Great Officers of State, who were not required to attend meetings, and the eight paid members, who were required to attend. The board, so constituted, had little real power, and matters related to trade and the colonies were usually within the jurisdiction of the secretaries of state and the Privy Council, with the board confining itself mainly to colonial administration. From 1973, international trade policy of the United Kingdom was a competence of the European Economic Community, and later of the European Union. The board was reconstituted in October 2017, after the UK had voted to leave the European Union in June 2016. In its most recent iteration in 2017, only privy counsellors can be actual members of the board, while others are appointed as advisers.

There is only 1 standing member in the Board, which is its President.