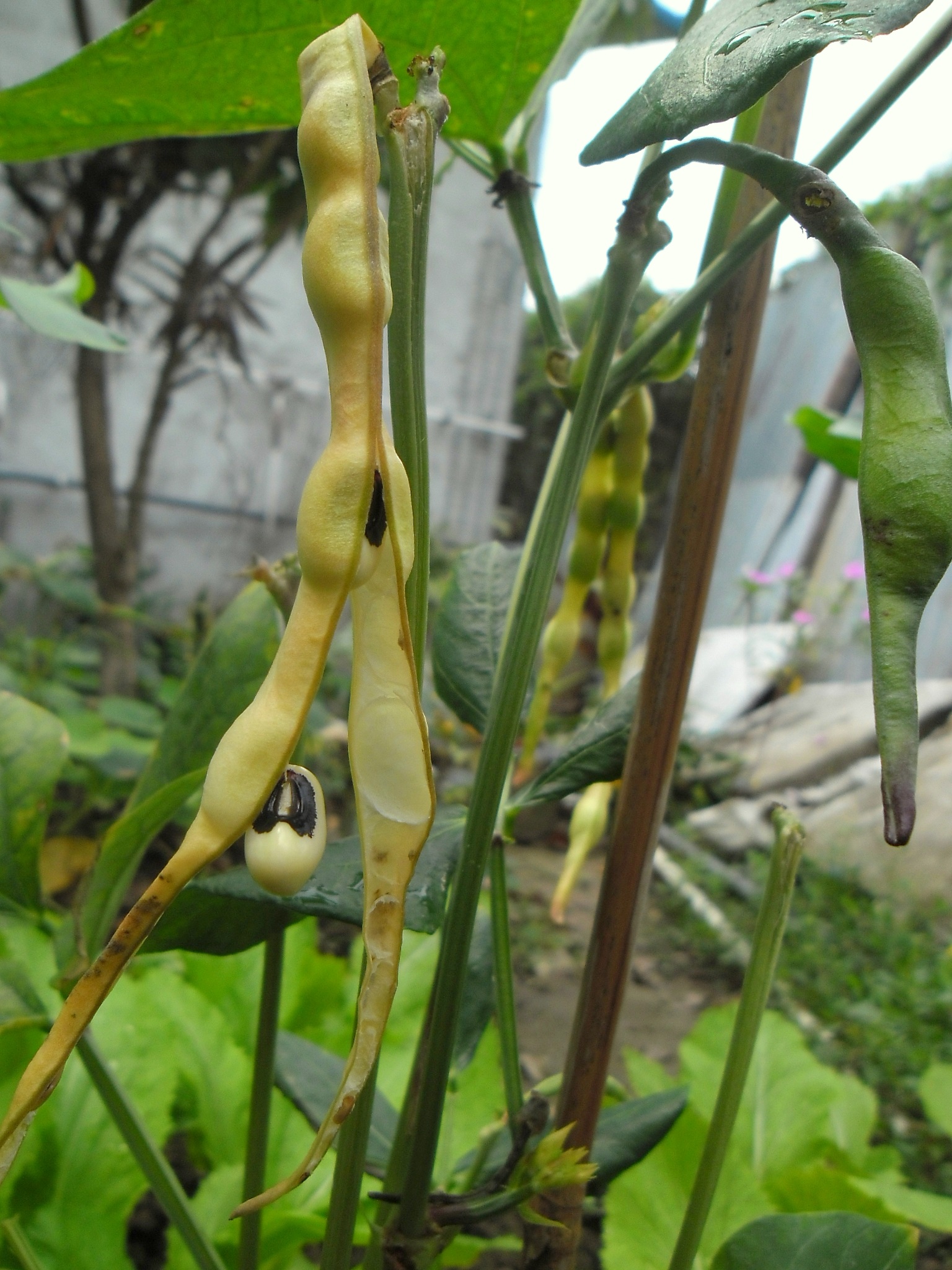 The black-eyed pea or black-eyed bean is a legume grown around the world for its medium-sized, edible bean. It is a subspecies of the cowpea, an Old World plant domesticated in Africa, and is sometimes simply called a cowpea. The common commercial variety is called the California Blackeye; it is pale-colored with a prominent black spot. The American South has countless varieties, many of them heirloom, that vary in size from the small lady peas to very large ones. The color of the eye may be black, brown, red, pink, or green. All the peas are green when freshly shelled and brown or buff when dried. A popular variation of the black-eyed pea is the purple hull pea; it is usually green with a prominent purple or pink spot. The currently accepted botanical name for the black-eyed pea is ''Vigna unguiculata'' subsp. ''unguiculata'', although previously it was classified in the genus ''Phaseolus''. ''Vigna unguiculata'' subsp. ''dekindtiana'' is the wild relative and ''Vigna unguiculata'' subsp. ''sesquipedalis'' is the related asparagus bean. Other beans of somewhat similar appearance, such as the ''frijol ojo de cabra'' (goat's-eye bean) of northern Mexico, are sometimes incorrectly called black-eyed peas, and vice versa.

The black eye pea is cultivated throughout the world. Most of the black-eyed pea cultivation occurred in the Southern United States as early as the 17th century in Virginia. The crop would also eventually prove popular in Texas. Throughout the South, the black-eyed pea is still a widely used ingredient in soul food and cuisines of the Southern United States. The planting of crops of black-eyed peas was promoted by George Washington Carver because, as a legume, it adds nitrogen to the soil and has high nutritional value. Black-eyed peas contain calcium (41 mg), folate (356 μg), protein (13.22 g), fiber (11.1 g) and vitamin A (26 IU), among other nutrients, with less than of food energy in a serving.

This heat-loving crop should be sown after all danger of frost has passed and the soil is warm. Seeds sown too early will rot before germination. Black-eyed peas are extremely drought tolerant, so excessive watering should be avoided. The crop is relatively free of pests and disease. Root-knot nematodes can be a problem, especially if crops are not rotated. As a nitrogen-fixing legume, fertilization can exclude nitrogen three weeks after germination. The blossom produces nectar plentifully, and large areas can be a source of honey. Because the bloom attracts a variety of pollinators, care must be taken in the application of insecticides to avoid label violations. After planting the pea, it should start to grow after 2–5 days.

In the Southern United States, eating black-eyed peas or Hoppin' John (a traditional soul food) on New Year's Day is thought to bring prosperity in the new year. The peas are typically cooked with a pork product for flavoring (such as bacon, fatback, ham bones, or hog jowls) and diced onion, and served with a hot chili sauce or a pepper-flavored vinegar. The traditional meal also includes cabbage, collard, turnip, or mustard greens, and ham. The peas, since they swell when cooked, symbolize prosperity; the greens symbolize money; the pork, because pigs root forward when foraging, represents positive motion. Cornbread, which represents gold, also often accompanies this meal. Several legends exist as to the origin of this custom. Two popular explanations for the South's association with peas and good luck dates back to the American Civil War. The first is associated with General William T. Sherman's march of the Union Army to the sea, during which they pillaged the Confederates' food supplies. Stories say peas and salted pork were said to have been left untouched, because of the belief that they were animal food unfit for human consumption. Southerners considered themselves lucky to be left with some supplies to help them survive the winter, and black-eyed peas evolved into a representation of good luck. One challenge to this legend is that General Sherman brought backup supplies with him including three days of animal feed and would have been unlikely to have left even animal feed untouched. In addition, the dates of the first average frost for Atlanta and Savannah, respectively, are November 13 and November 28. As Sherman's march was from November 15 to December 21, 1864, it is improbable, although possible, that the Union Army would have come across standing fields of black-eyed peas as relayed in most versions of the legend. In another Southern tradition, black-eyed peas were a symbol of emancipation for African-Americans who had previously been enslaved, and who after the Civil War were officially freed on New Years Day. Other Southern American traditions point to Jews of Ashkenazi and Sephardic ancestry in Southern cities and plantations eating the peas.

In Egypt, black-eyed peas are called ''lobia''. Cooked with onions, garlic, meat, and tomato juice, and served with Egyptian rice with some pastina called ''shaerya'' mixed in, it makes the most famous rice dish in Egypt. In Jordan, Lebanon, and Syria, ''lobya'' or green black-eyed-beans are cooked with onion, garlic, tomatoes, peeled and chopped, olive oil, salt and black pepper. In Nigeria and Ghana within West Africa and the Caribbean, a traditional dish called ''akara'' or ''koose'' is made of mashed black-eyed peas to which is added salt, onions and/or peppers. The mixture is then fried. In Nigeria, there is also a pudding made from it called 'moin-moin' where it is ground and mixed with seasoning as well as some plant proteins before it is steamed. This is served with various carbohydrate rich foods such as pap, rice or garri.

Asia and the Pacific

In Indonesia, black-eyed peas are called ''kacang tunggak'' or ''kacang tolo'' in the local language. They are commonly used in curry dishes such as ''sambal goreng'', a kind of hot and spicy red curry dish, ''sayur brongkos'', or ''sayur lodeh''. The bean is commonly used across India. In North India, black-eyed peas are called ''lobia'' or ''rongi'' and cooked like ''daal'', served with boiled rice. In Maharashtra, they are called ''chawli'' and made into a curry called ''chawli amti'' or ''chawli usal''. In Karnataka they are called ''alsande kalu'' and used in the preparation of ''huli'', a popular type of curry. In South Kanara district they are called as ''lathanay dha beeja'' and are cooked in spiced coconut paste to make a saucy curry or a dry coconut curry. In Tamil Nadu, they are called ''karamani'' or thattapayaru and used in various recipes, including being boiled and made into a salad-like ''sundal'' (often during the Ganesh Chaturthi and Navratri festivals). In Andhra Pradesh they are known by the name 'alasandalu' and are used for variety of recipes most popularly for 'vadas'. In Kerala, they are a part of the Sadhya dish, Olan. In Vietnam, black-eyed peas are used in a sweet dessert called ''chè đậu trắng'' (black-eyed peas and sticky rice with coconut milk).

In Cyprus ( φρέσκο λουβί (fresko luvi)), Greece ( μαυρομάτικα) and Turkey (börülce salatası), blanched black-eyed peas are eaten as salad with a dressing of olive oil, salt, lemon juice, onions and garlic. In Portugal, black-eyed peas are served with boiled cod and potatoes, with tuna, and in salads.

;North America "Hoppin' John", made of black-eyed peas or field peas, rice, and pork, is a traditional dish of parts of the Southern United States. Texas caviar, another traditional dish in the American South, is made from black-eyed peas marinated in vinaigrette-style dressing and chopped garlic. ;South America In Brazil's northeastern state of Bahia, especially in the city of Salvador, black-eyed peas are used in a traditional street food of Nigerian origin called ''akara''. The beans are peeled and mashed, and the resulting paste is made into balls and deep fried in ''dendê''. ''Acarajé'' is typically served split in half and stuffed with ''vatapá'', ''caruru'', diced green and red tomatoes, fried sun-dried shrimp and homemade hot sauce. In the northern part of Colombia, they are used to prepare a fritter called ''buñuelo''. The beans are immersed in water for a few hours to loosen their skins and soften them. The skins are then removed either by hand or with the help of a manual grinder. Once the skins are removed, the bean is ground or blended, and eggs are added, which produces a soft mix. The mix is fried in hot oil. It makes a nutritious breakfast meal. In Guyana, South America, and Trinidad and Tobago, it is one of the most popular type of beans cooked with rice, the main one being red kidney beans, also referred to as red beans. It is also cooked as a snack or appetizer on its own. On New Year's Eve (referred to as Old Year's Night in Guyana and Suriname), families cook a traditional dish called cook-up rice. The dish comprises rice, black-eyed peas, and other peas and a variety of meats cooked in coconut milk and seasonings. According to tradition, cook-up rice should be the first thing consumed in the New Year for good luck. Cook-up rice is also made as an everyday dish.