Click Here for Items Related To - Battle of Waterloo


The Battle of Waterloo was fought on Sunday, 18 June 1815, near Waterloo in Belgium, part of the United Kingdom of the Netherlands at the time. A French army under the command of Napoleon Bonaparte was defeated by two of the armies of the Seventh Coalition, a British-led coalition consisting of units from the United Kingdom, the Netherlands, Hanover, Brunswick, and Nassau, under the command of the Duke of Wellington, referred to by many authors as the Anglo-allied army or Wellington's army, and a Prussian army under the command of Field Marshal von Blücher, referred to also as Blücher's army. The battle marked the end of the Napoleonic Wars. Upon Napoleon's return to power in March 1815, many states that had opposed him formed the Seventh Coalition and began to mobilise armies. Wellington and Blücher's armies were cantoned close to the northeastern border of France. Napoleon planned to attack them separately in the hope of destroying them before they could join in a coordinated invasion of France with other members of the coalition. On 16 June, Napoleon successfully attacked the bulk of the Prussian army at the Battle of Ligny with his main force, causing the Prussians to withdraw northwards on 17 June, but parallel to Wellington and in good order. Napoleon sent a third of his forces to pursue the Prussians, which resulted in the separate Battle of Wavre with the Prussian rear-guard on 18–19 June, and prevented that French force from participating at Waterloo. Also on 16 June, a small portion of the French army contested the Battle of Quatre Bras with the Anglo-allied army. The Anglo-allied army held their ground on 16 June, but the withdrawal of the Prussians caused Wellington to withdraw north to Waterloo on 17 June. Upon learning that the Prussian army was able to support him, Wellington decided to offer battle on the Mont-Saint-Jean escarpment across the Brussels road, near the village of Waterloo. Here he withstood repeated attacks by the French throughout the afternoon of 18 June, aided by the progressively arriving Prussians who attacked the French flank and inflicted heavy casualties. In the evening Napoleon assaulted the Anglo-allied line with his last reserves, the senior infantry battalions of the French Imperial Guard. With the Prussians breaking through on the French right flank, the Anglo-allied army repulsed the Imperial Guard, and the French army was routed. Waterloo was the decisive engagement of the Waterloo Campaign and Napoleon's last. According to Wellington, the battle was "the nearest-run thing you ever saw in your life". Napoleon abdicated four days later, and coalition forces entered Paris on 7 July. The defeat at Waterloo ended Napoleon's rule as Emperor of the French and marked the end of his Hundred Days return from exile. This ended the First French Empire and set a chronological milestone between serial European wars and decades of relative peace, often referred to as the ''Pax Britannica''. The battlefield is located in the Belgian municipalities of Braine-l'Alleud and Lasne, about south of Brussels, and about from the town of Waterloo. The site of the battlefield today is dominated by the monument of the Lion's Mound, a large artificial hill constructed from earth taken from the battlefield itself; the topography of the battlefield near the mound has not been preserved. 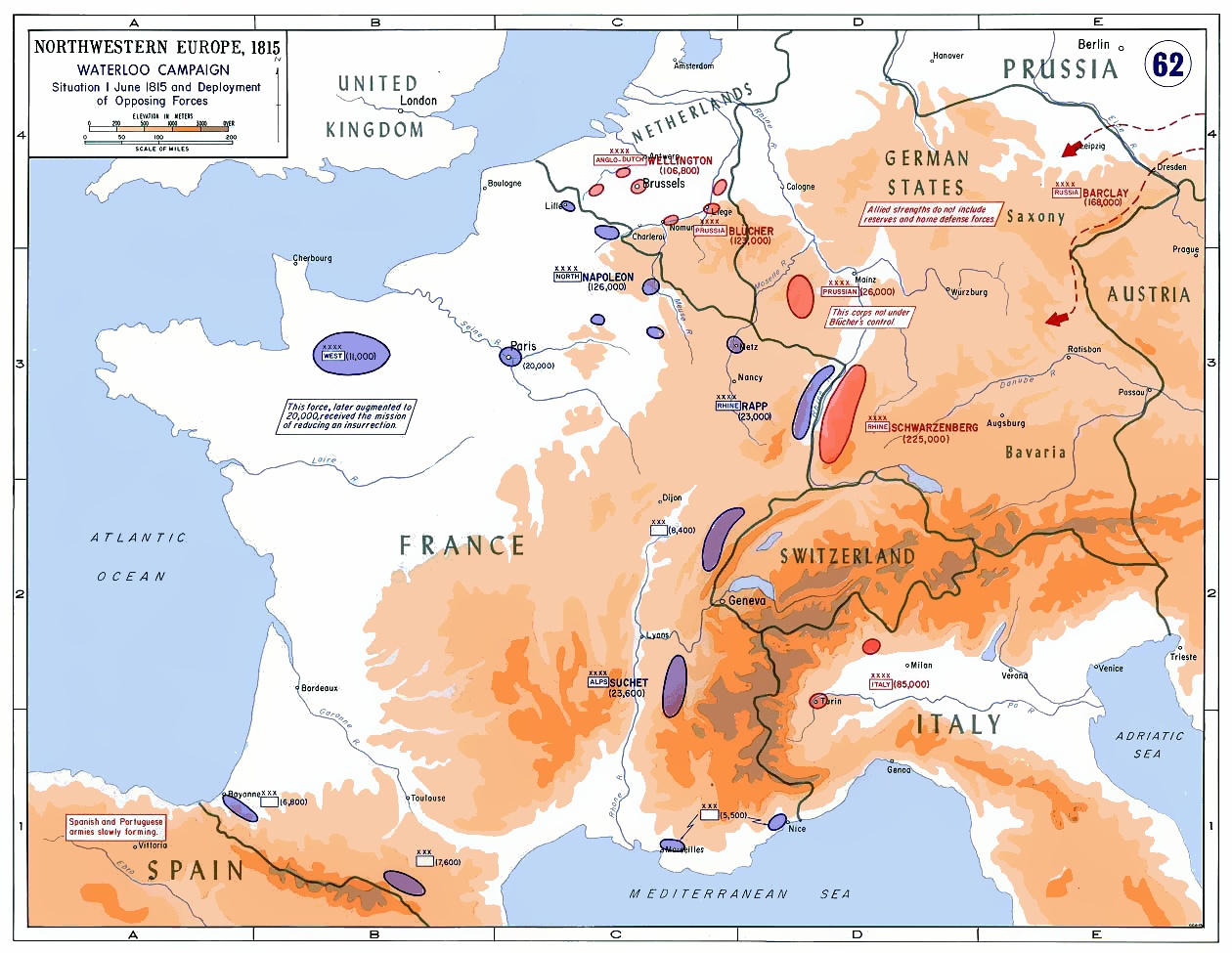 Three armies participated in the battle: Napoleon's ''Armée du Nord'', a multinational army under Wellington, and a Prussian army under Blücher. The French army of around 69,000 consisted of 48,000 infantry, 14,000 cavalry, and 7,000 artillery with 250 guns. Napoleon had used conscription to fill the ranks of the French army throughout his rule, but he did not conscript men for the 1815 campaign. His troops were mainly veterans with considerable experience and a fierce devotion to their Emperor. The cavalry in particular was both numerous and formidable, and included fourteen regiments of armoured heavy cavalry, and seven of highly versatile lancers who were armed with lances, sabres and firearms. However, as the army took shape, French officers were allocated to units as they presented themselves for duty, so that many units were commanded by officers the soldiers didn't know, and often didn't trust. Crucially, some of these officers had little experience in working together as a unified force, so that support for other units was often not given. The French army was forced to march through rain and black coal-dust mud to reach Waterloo, and then to contend with mud and rain as it slept in the open. Little food was available for the soldiers, but nevertheless the veteran French soldiers were fiercely loyal to Napoleon.