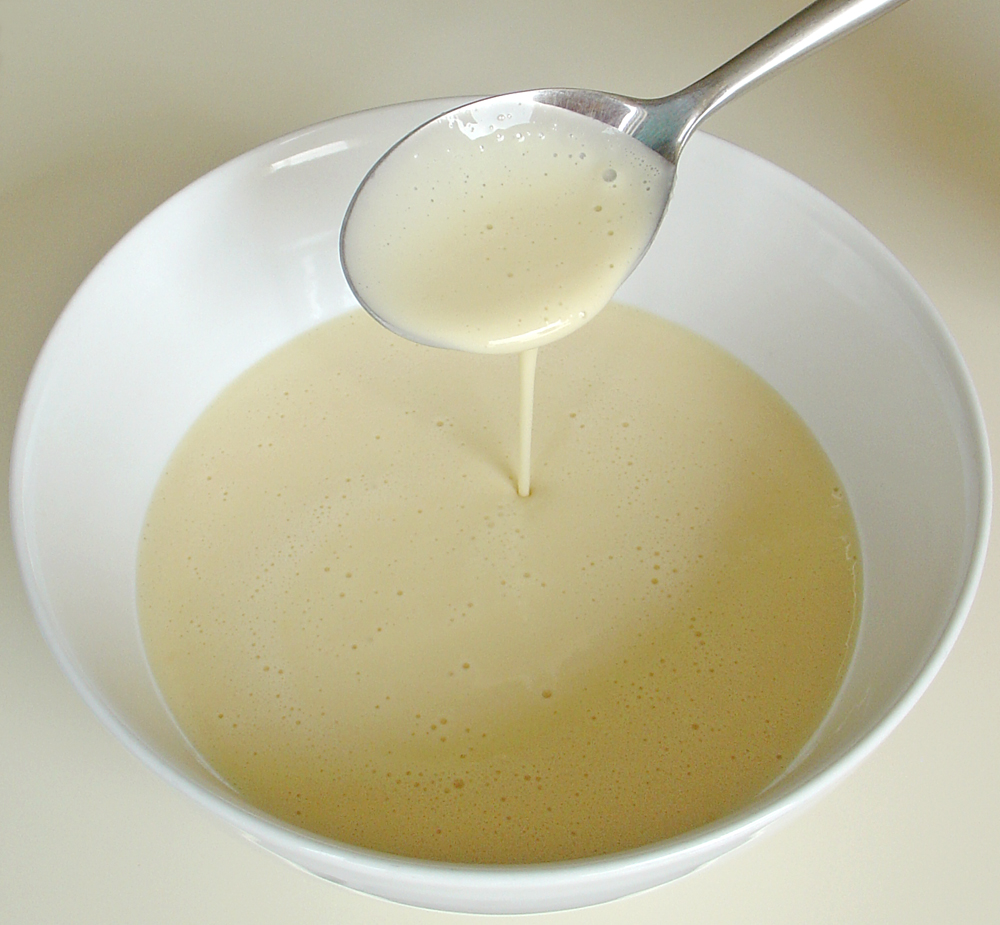 Batter is a flour mixture with liquid and other ingredients like sugar, salt and leavening. Batter is most often used for pancakes, light cakes, and as a coating for fried foods. The word ''batter'' comes from the French word ''battre'' which means ''to beat'', as many batters require vigorous beating or whisking in their preparation.

Many batters are made by combining dry flours with liquids such as water, milk or eggs. Batters can also be made by soaking grains in water and grinding them wet. Often a leavening agent such as baking powder is included to aerate and fluff up the batter as it cooks, or the mixture may be naturally fermented for this purpose as well as to add flavour. Carbonated water or another carbonated liquid such as beer may instead be used to aerate the batter in some recipes. Other substitutes for water are wine, or flavored liquors like curacao, brandy, and maraschino. The viscosity of batter may range from very "heavy" (adhering to an upturned spoon) to "thin" (similar to single cream, enough to pour or drop from a spoon and sometimes called "drop batter"). Heat is applied to the batter, usually by frying, baking or steaming, in order to cook the ingredients and to "set" the batter into a solid form. Batters may be sweet or savoury, often with either sugar or salt being added (sometimes both). Many other flavourings such as herbs, spices, fruits or vegetables may be added to the mixture.

Beer is a popular ingredient in batters used to coat foods before frying. One reason is that a basic batter can be made from merely flour, beer, and some salt. The purpose of using beer is so the bubbles in the beer will add body and lightness to the batter. Depending on the type and quality of the beer, beer may also add colour or some flavour to the batter. The practice of beer battering is popular in Australia, New Zealand, the United States, Britain, Ireland, Germany, Iceland and Russia. Some foods that are commonly beer battered and fried are fish, chips, and onion rings.

Batters are used in many cuisines under many names. Tempura in Japan, pakoda and dosa in India, spoonbread in the US, and many other examples are all types of batters. All batters work by forming a crisp shell around the food, preventing scorching and retaining flavor and juices. The ideal batter for fried foods is to be thick enough to adhere to the food, but not so thick as to become heavy. Batters made with wheat flour thicken with every second that passes after mixing because of the development of gluten. Strategies to reduce this effect include the use of ice water when mixing, alcohol (which does not mix with the flour to produce gluten), and making it at the last possible moment before use.