Bayerische Motoren Werke AG, commonly referred to as BMW (), is a German multinational corporation which produces luxury vehicles and motorcycles. The company was founded in 1916 as a manufacturer of aircraft engines, which it produced from 1917 until 1918 and again from 1933 to 1945. Automobiles are marketed under the brands BMW, Mini and Rolls-Royce, and motorcycles are marketed under the brand BMW Motorrad. In 2017, BMW was the world's fourteenth-largest producer of motor vehicles, with 2,279,503 vehicles produced. The company has significant motorsport history, especially in touring cars, Formula 1, sports cars and the Isle of Man TT. BMW is headquartered in Munich and produces motor vehicles in Germany, Brazil, China, India, South Africa, the United Kingdom, the United States and Mexico. The Quandt family is a long-term shareholder of the company (with the remaining shares owned by public float), following brothers Herbert and Harald Quandt's investments in 1959 which saved the company from bankruptcy.

''Bayerische Flugzeugwerke AG'' was formed in 1916. This company was renamed to ''Bayerische Motoren Werke'' (BMW) in 1922. However the name BMW dates back to 1913, when the original company to use the name was founded by Karl Rapp (initially as ''Rapp Motorenwerke GmbH''). BMW's first product was a straight-six aircraft engine called the BMW IIIa, designed in the spring of 1917 by engineer Max Friz. Following the end of World War I, BMW remained in business by producing motorcycle engines, farm equipment, household items and railway brakes. The company produced its first motorcycle, the ''BMW R 32'' in 1923. BMW became an automobile manufacturer in 1928 when it purchased ''Fahrzeugfabrik Eisenach'', which, at the time, built Austin Sevens under licence under the Dixi marque. The first car sold as a BMW was a rebadged Dixi called the ''BMW 3/15'', following BMW's acquisition of the car manufacturer Automobilwerk Eisenach. Throughout the 1930s, BMW expanded its range into sports cars and larger luxury cars. Aircraft engines, motorcycles, and automobiles would be BMW's main products until World War II. During the war, against the wishes of its director Franz Josef Popp , BMW concentrated on aircraft engine production using forced labor consisting primarily of prisoners from concentration camps, with motorcycles as a side line and automobile manufacture ceased altogether. BMW's factories were heavily bombed during the war and its remaining West German facilities were banned from producing motor vehicles or aircraft after the war. Again, the company survived by making pots, pans, and bicycles. In 1948, BMW restarted motorcycle production. BMW resumed car production in Bavaria in 1952 with the ''BMW 501'' luxury saloon. The range of cars was expanded in 1955, through the production of the cheaper Isetta microcar under licence. Slow sales of luxury cars and small profit margins from microcars meant BMW was in serious financial trouble and in 1959 the company was nearly taken over by rival Daimler-Benz. A large investment in BMW by Herbert Quandt and Harald Quandt resulted in the company surviving as a separate entity. The ''BMW 700'' was successful and assisted in the company's recovery. The 1962 introduction of the ''BMW New Class'' compact sedans was the beginning of BMW's reputation as a leading manufacturer of sport-oriented cars. Throughout the 1960s, BMW expanded its range by adding coupe and luxury sedan models. The ''BMW 5 Series'' mid-size sedan range was introduced in 1972, followed by the ''BMW 3 Series'' compact sedans in 1975, the ''BMW 6 Series'' luxury coupes in 1976 and the ''BMW 7 Series'' large luxury sedans in 1978. The ''BMW M'' division released its first road car, a mid-engine supercar, in 1978. This was followed by the ''BMW M5'' in 1984 and the ''BMW M3'' in 1986. Also in 1986, BMW introduced its first V12 engine in the 750i luxury sedan. The company purchased the Rover Group in 1994, however the takeover was not successful and was causing BMW large financial losses. In 2000, BMW sold off most of the Rover brands, retaining only the Mini brand. In 1998, BMW also acquired the rights to the Rolls Royce brand from Vickers Plc. The 1995 ''BMW Z3'' expanded the line-up to include a mass-production two-seat roadster and the 1999 ''BMW X5'' was the company's entry into the SUV market. The first modern mass-produced turbocharged petrol engine was introduced in 2006, (from 1973 to 1975, BMW built 1672 units of a turbocharged M10 engine for the BMW 2002 turbo), with most engines switching over to turbocharging over the 2010s. The first hybrid BMW was the 2010 ''BMW ActiveHybrid 7'', and BMW's first mass-production electric car was the ''BMW i3'' city car, which was released in 2013, (from 1968 to 1972, BMW built two battery-electric BMW 1602 Elektro saloons for the 1972 Olympic Games). After many years of establishing a reputation for sporting rear-wheel drive cars, BMW's first front-wheel drive car was the 2014 ''BMW 2 Series Active Tourer'' multi-purpose vehicle (MPV). In January 2021, BMW announced that its sales in 2020 fell by 8.4% due to the impact of the Covid-19 pandemic and the restrictions. However, in the fourth quarter of 2020, BMW witnessed a rise of 3.2% of its customers' demands.

The name BMW is an abbreviation for ''Bayerische Motoren Werke'' (). This name is grammatically incorrect (in German, compound words must not contain spaces), which is why the name's grammatically correct form ''Bayerische Motorenwerke'' () has been used in several publications and advertisements in the past. ''Bayerische Motorenwerke'' translates into English as ''Bavarian Motor Works''. The suffix AG, short for ''Aktiengesellschaft'', signifies an incorporated entity which is owned by shareholders, thus akin to "Inc." (US) or PLC, "Public Limited Company" (UK). The terms Beemer, Bimmer and Bee-em are sometimes used as slang for BMW in the English language and are sometimes used interchangeably for cars and motorcycles.

thumb|150px|Logo used for publicity purposes since March 2020 The circular blue and white BMW logo or roundel evolved from the circular Rapp Motorenwerke company logo, which featured a black ring bearing the company name surrounding the company logo, ''on a plinth a horse's head couped''. BMW retained Rapp's black ring inscribed with the company name, but adopted as the central element a circular escutcheon bearing a quasi-heraldic reference to the coat of arms (and flag) of the Free State of Bavaria (as the state of their origin was named after 1918), being the arms of the House of Wittelsbach, Dukes and Kings of Bavaria. However, as the local law regarding trademarks forbade the use of state coats of arms or other symbols of sovereignty on commercial logos, the design was sufficiently differentiated to comply, but retained the tinctures azure (blue) and argent (white). The current iteration of the logo was introduced in 2020, removing 3D effects that had been used in renderings of the logo, and also removing the black outline encircling the rondel. The logo will be used on BMW's branding but will not be used on vehicles. The origin of the logo as a portrayal of the movement of an aircraft propeller, the BMW logo with the white blades seeming to cut through a blue sky, is a myth which sprang from a 1929 BMW advertisement depicting the BMW emblem overlaid on a rotating propeller, with the quarters defined by strobe-light effect, a promotion of an aircraft engine then being built by BMW under license from Pratt & Whitney. ''"For a long time, BMW made little effort to correct the myth that the BMW badge is a propeller"'' (quote by Fred Jakobs, Archive Director, BMW Group Classic). It is well established that this propellor portrayal was first used in a BMW advertisement in 1929 – twelve years after the logo was created – so this is not the true origin of the logo.

For the fiscal year 2017, BMW reported earnings of EUR 8.620 billion, with an annual revenue of EUR 98.678 billion, an increase of 4.8% over the previous fiscal cycle. BMW's shares traded at over €77 per share, and its market capitalization was valued at US 55.3 billion in November 2018. 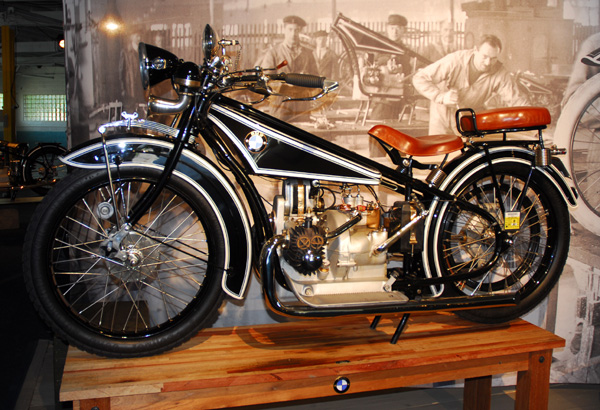 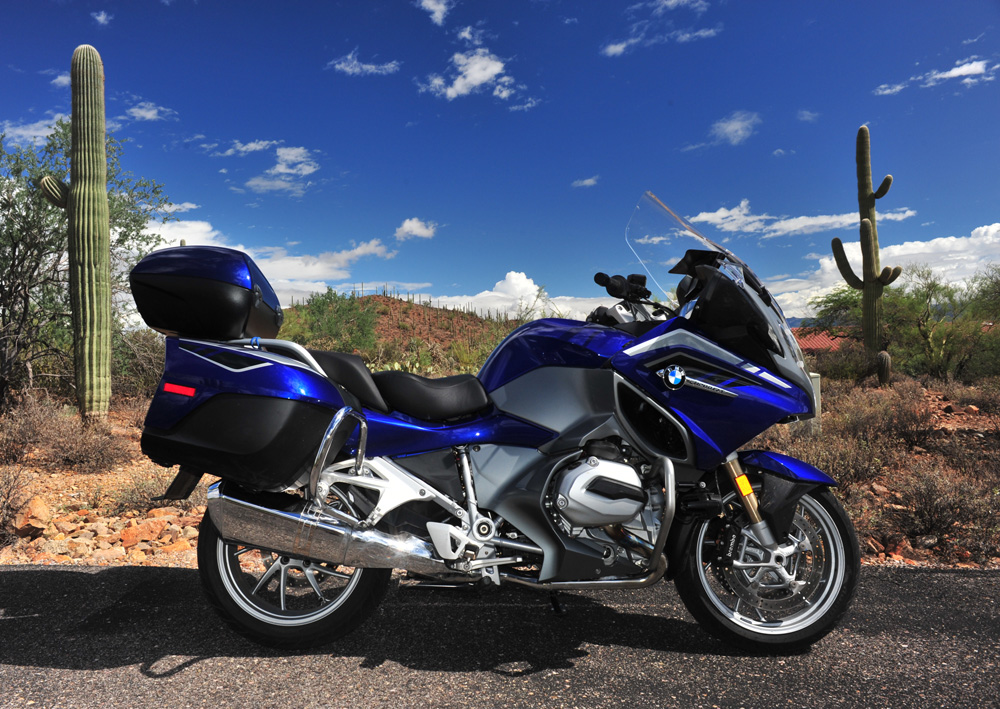 BMW began production of motorcycle engines and then motorcycles after World War I. Its motorcycle brand is now known as BMW Motorrad. Their first successful motorcycle after the failed Helios and Flink, was the "R32" in 1923, though production originally began in 1921. This had a "boxer" twin engine, in which a cylinder projects into the air-flow from each side of the machine. Apart from their single-cylinder models (basically to the same pattern), all their motorcycles used this distinctive layout until the early 1980s. Many BMW's are still produced in this layout, which is designated the R Series. The entire BMW Motorcycle production has, since 1969, been located at the company's Berlin-Spandau factory. During the Second World War, BMW produced the BMW R75 motorcycle with a motor-driven sidecar attached, combined with a lockable differential, this made the vehicle very capable off-road. In 1982, came the K Series, shaft drive but water-cooled and with either three or four cylinders mounted in a straight line from front to back. Shortly after, BMW also started making the chain-driven F and G series with single and parallel twin Rotax engines. In the early 1990s, BMW updated the airhead Boxer engine which became known as the oilhead. In 2002, the oilhead engine had two spark plugs per cylinder. In 2004 it added a built-in balance shaft, an increased capacity to 1170 cc and enhanced performance to for the R1200GS, compared to of the previous R1150GS. More powerful variants of the oilhead engines are available in the R1100S and R1200S, producing , respectively. In 2004, BMW introduced the new K1200S Sports Bike which marked a departure for BMW. It had an engine producing , derived from the company's work with the Williams F1 team, and is lighter than previous K models. Innovations include electronically adjustable front and rear suspension, and a Hossack-type front fork that BMW calls Duolever. BMW introduced anti-lock brakes on production motorcycles starting in the late 1980s. The generation of anti-lock brakes available on the 2006 and later BMW motorcycles paved the way for the introduction of electronic stability control, or anti-skid technology later in the 2007 model year. BMW has been an innovator in motorcycle suspension design, taking up telescopic front suspension long before most other manufacturers. Then they switched to an Earles fork, front suspension by swinging fork (1955 to 1969). Most modern BMWs are truly rear swingarm, single sided at the back (compare with the regular swinging fork usually, and wrongly, called swinging arm). Some BMWs started using yet another trademark front suspension design, the Telelever, in the early 1990s. Like the Earles fork, the Telelever significantly reduces dive under braking. BMW Group, on 31 January 2013, announced that Pierer Industrie AG has bought Husqvarna Motorcycles for an undisclosed amount, which will not be revealed by either party in the future. The company is headed by Stephan Pierer (CEO of KTM). Pierer Industrie AG is 51% owner of KTM and 100% owner of Husqvarna. In September 2018, BMW unveiled a new self-driving motorcycle with BMW Motorrad with a goal of using the technology to help improve road safety. The design of the bike was inspired by the company's BMW R1200 GS model.


Involvement in the arts

In 1975, sculptor Alexander Calder was commissioned to paint the BMW 3.0 CSL racing car driven by Hervé Poulain at the 24 Hours of Le Mans, which became the first in the series of BMW Art Cars. Since Calder's work of art, many other renowned artists throughout the world have created BMW Art Cars, including David Hockney, Jenny Holzer, Roy Lichtenstein, Robert Rauschenberg, Frank Stella, and Andy Warhol. To date, a total of 19 BMW Art Cars, based on both racing and regular production vehicles, have been created.

The global BMW Headquarters in Munich represents the cylinder head of a 4-cylinder engine. It was designed by Karl Schwanzer and was completed in 1972. The building has become a European icon