or banh mi (, ; ) is the Vietnamese word for bread. In Vietnamese cuisine, it also refers to a type of short baguette with thin, crisp crust and soft, airy texture inside that is often split lengthwise and filled with various savory ingredients like a submarine sandwich and served as a meal. Plain ''banh mi'' is also eaten as a staple food. A typical Vietnamese roll or sandwich is a fusion of meats and vegetables from native Vietnamese cuisine such as ''chả lụa'' (pork sausage), coriander leaf (cilantro), cucumber, pickled carrots, and pickled daikon combined with condiments from French cuisine such as ''pâté'', along with chili and mayonnaise. However, a wide variety of popular fillings are used, from to ice cream. In Vietnam, bread rolls and sandwiches are typically eaten for breakfast or as a snack. The baguette was introduced to Vietnam in the mid-19th century, when Vietnam was part of French Indochina, and became a staple food by the early 20th century. During the 1950s, a distinctly Vietnamese style of sandwich developed in Saigon, becoming a popular street food, also known as ''bánh mì Sài Gòn'' ("''Saigon sandwich", "Saigon-style banh mi"''). Following the Vietnam War, Overseas Vietnamese popularized the sandwich in countries such as Australia, Canada and the United States. In these countries they are commonly sold in Asian bakeries.

In Vietnamese, the word ' is derived from ' (which can refer to many kinds of food, primarily baked goods, including bread) and ' (wheat). It may also be spelled ' in northern Vietnam. Taken alone, ' means "bread", but also understood to be the Vietnamese baguette. Via synecdoche, it may also refer to the sandwich, with the term ' or ''bánh mì thịt'' being used to disambiguate. A folk etymology claims that the word ' is a corruption of the French ', meaning soft, white bread. However, ' or its Nôm form has referred to rice cakes and other pastries since as early as the 13th century, centuries before French contact. Many restaurateurs, chefs, and food companies unfamiliar with the term misunderstand ' to refer to the fillings (particularly the pickled radish and carrot) rather than the bread and sandwich, resulting in the term being incorrectly applied to bowls, soups, salads, and other inapplicable foods.

The word , meaning "bread", is attested in Vietnamese as early as the 1830s, in Jean-Louis Taberd's dictionary '. French colonists introduced Vietnam to the baguette, along with other baked goods such as pâté chaud, in the 1860s, when Vietnam was part of French Indochina. Northern Vietnamese initially called the baguette ', literally "Western bánh", while southern Vietnamese called it , "wheat bánh". Nguyễn Đình Chiểu mentions the baguette in his 1861 poem "". Due to the price of imported wheat at the time, French baguettes and sandwiches were considered luxury items. During World War I, an influx of French soldiers and supplies arrived. At the same time, disruptions of wheat imports led bakers to begin mixing in inexpensive rice flour (which also made the bread fluffier). As a result, it became possible for ordinary Vietnamese to enjoy French staples such as bread. Many shops baked twice a day, because bread tends to go stale more quickly in the Vietnamese climate. Baguettes were mainly eaten for breakfast with some butter and sugar. Until the 1950s, sandwiches hewed closely to French tastes, typically a ''jambon-beurre'' moistened with a mayonnaise or liver spread. The 1954 Partition of Vietnam sent over a million migrants from North Vietnam to South Vietnam, transforming Saigon's local cuisine. Among the migrants were and , who opened a small bakery named in District 3. In 1958, became one of the first shops to sell '. Around this time, another migrant from the North began selling sandwiches from a basket on a mobylette, and a stand in Gia Định Province (present-day Phú Nhuận District) began selling sandwiches. Some shops stuffed sandwiches with inexpensive Cheddar cheese, which came from French food aid that migrants from the North had rejected. Vietnamese communities in France also began selling '. After the Fall of Saigon in 1975, ' sandwiches became a luxury item once again. During the so-called "subsidy period", state-owned ''phở'' eateries often served bread or cold rice as a side dish, leading to the present-day practice of dipping in ''phở''. In the 1980s, Đổi Mới market reforms led to a renaissance in , mostly as street food. Meanwhile, Vietnamese Americans brought ''bánh mì'' sandwiches to cities across the United States. In Northern California, and his sons are credited with popularizing ' among Vietnamese and non-Vietnamese Americans alike through their food truck services provider and their fast-food chain, Lee's Sandwiches, beginning in the 1980s. Sometimes was likened to local sandwiches. In New Orleans, a "Vietnamese po' boy" recipe won the 2009 award for best po' boy at the annual Oak Street Po-Boy Festival. A restaurant in Philadelphia also sells a similar sandwich, marketed as a "Vietnamese hoagie". sandwiches were featured in the 2002 PBS documentary ''Sandwiches That You Will Like''. The word was added to the ''Oxford English Dictionary'' on 24 March 2011. As of 2017, is included in about 2% of U.S. restaurant sandwich menus, a nearly fivefold increase from 2013.

A Vietnamese baguette has a thin crust and white, airy crumb. It may consist of both wheat flour and rice flour. Besides being made into a sandwich, it is eaten alongside meat dishes, such as ''bò kho'' (a beef stew), curry, and '. It can also be dipped in condensed milk (see Sữa Ông Thọ).

As with Western sandwiches, a wide variety of popular fillings are used. A typical shop in the United States offers at least 10 varieties. The most popular variety of Vietnamese sandwich is ', ''thịt'' meaning "meat". ' (also known as ', ', or "special combo") is made with various Vietnamese cold cuts, such as sliced pork or pork belly, ''chả lụa'' (pork sausage), and head cheese, along with the liver ' and vegetables like carrot or cucumbers. Other varieties include: * ' (shredded pork sandwich) shredded pork or pork skin, doused with fish sauce * ' (pork floss sandwich) * ' (minced pork meatball sandwich) smashed pork meatballs * ' (ham sandwich) * ' (sardine sandwich) * ' (' sandwich) * ' or ' (barbecue pork sandwich) * ' or ' (pork sausage sandwich) * ' (grilled chicken sandwich) * ' (vegetarian sandwich) made with tofu or ''seitan''; in Vietnam, usually made at Buddhist temples during special religious events, but uncommon on the streets * ' (fish patty sandwich) * ' (margarine or buttered sandwich) margarine / butter and sugar * ' (fried egg sandwich) contains fried eggs with onions, sprinkled with soy sauce, sometimes buttered; served for breakfast in Vietnam * ' (ice cream sandwich) contains scoops of ice cream topped with crushed peanuts The Vietnamese sandwich has been adapted to Lao cuisine as ''khao chī'' ( lo|ເຂົ້າຈີ່) and to Cambodian cuisine as ''num pang'' ( km|នំបុ័ង). Nowadays, it is poplular with different type of : ''bánh mì que''. Its shape is thinner and longer than normal one. But it can be fulfilled with different ingredients as normal . 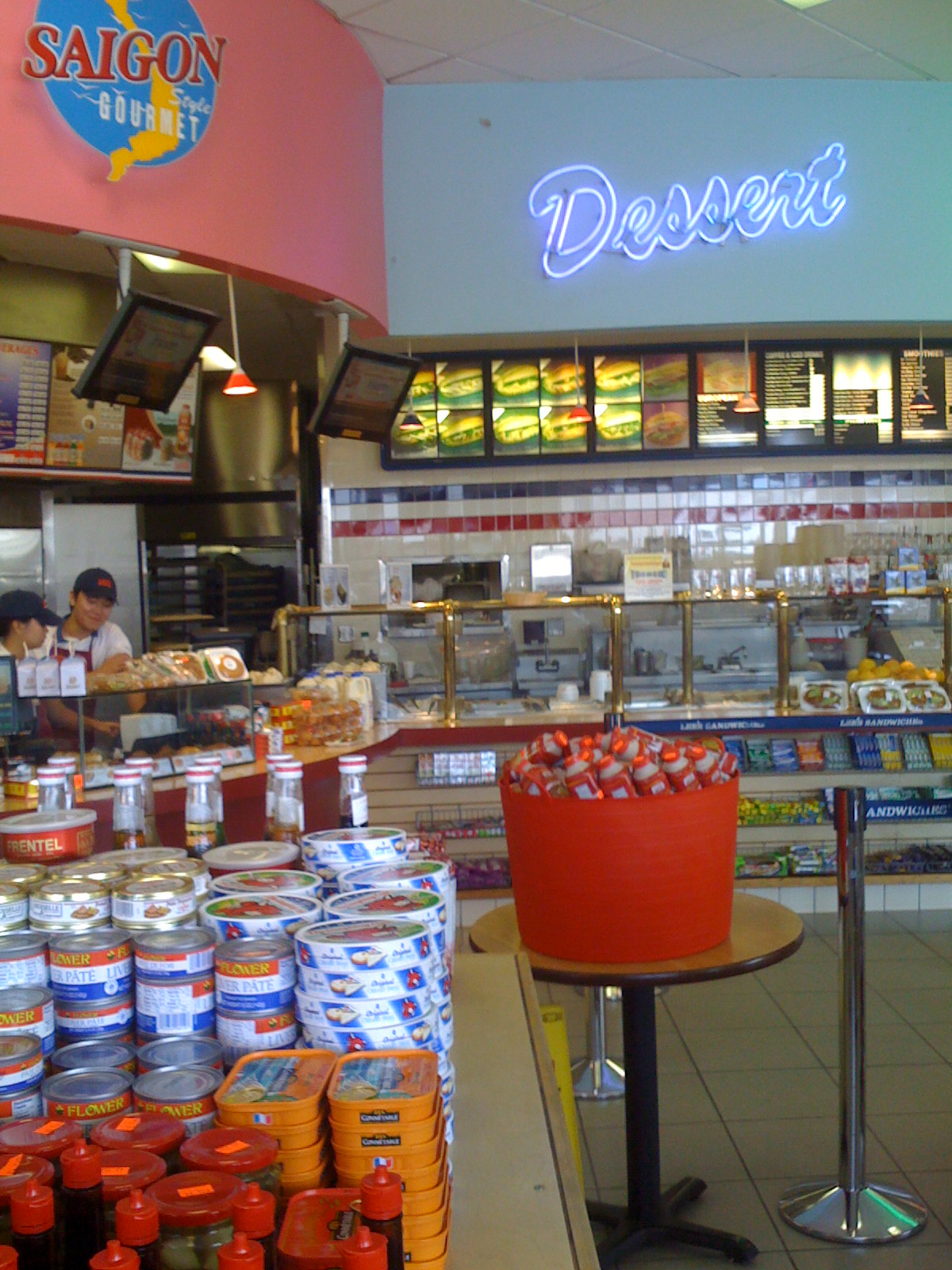 Prior to the Fall of Saigon in 1975, well-known South Vietnamese ' vendors included and (which opened in 1968). In regions of the United States with significant populations of Vietnamese Americans, numerous bakeries and fast food restaurants specialize in '. Lee's Sandwiches, a fast food chain with locations in several states, specializes in Vietnamese sandwiches served on French baguettes (or traditional ' at some locations) as well as Western-style sandwiches served on croissants. In New Orleans, Dong Phuong Oriental Bakery is known for the ' bread that it distributes to restaurants throughout the city. After 1975, owner Võ Văn Lẹ fled to the United States and, along with , founded . The Eden Center shopping center in Northern Virginia has several well-known bakeries specializing in '. Mainstream fast food chains have also incorporated ' and other Vietnamese dishes into their portfolios. Yum! Brands operates a chain of ' cafés called Bánh Shop. The former Chipotle-owned ShopHouse Southeast Asian Kitchen chain briefly sold '. Jack in the Box offers a "–inspired" fried chicken sandwich as part of its Food Truck Series. McDonald's and Paris Baguette locations in Vietnam offer .