]] An auxiliary power unit (APU) is a device on a vehicle that provides energy for functions other than propulsion. They are commonly found on large aircraft and naval ships as well as some large land vehicles. Aircraft APUs generally produce 115 V AC voltage at 400 Hz (rather than 50/60 Hz in mains supply), to run the electrical systems of the aircraft; others can produce 28 V DC voltage . APUs can provide power through single or three-phase systems. 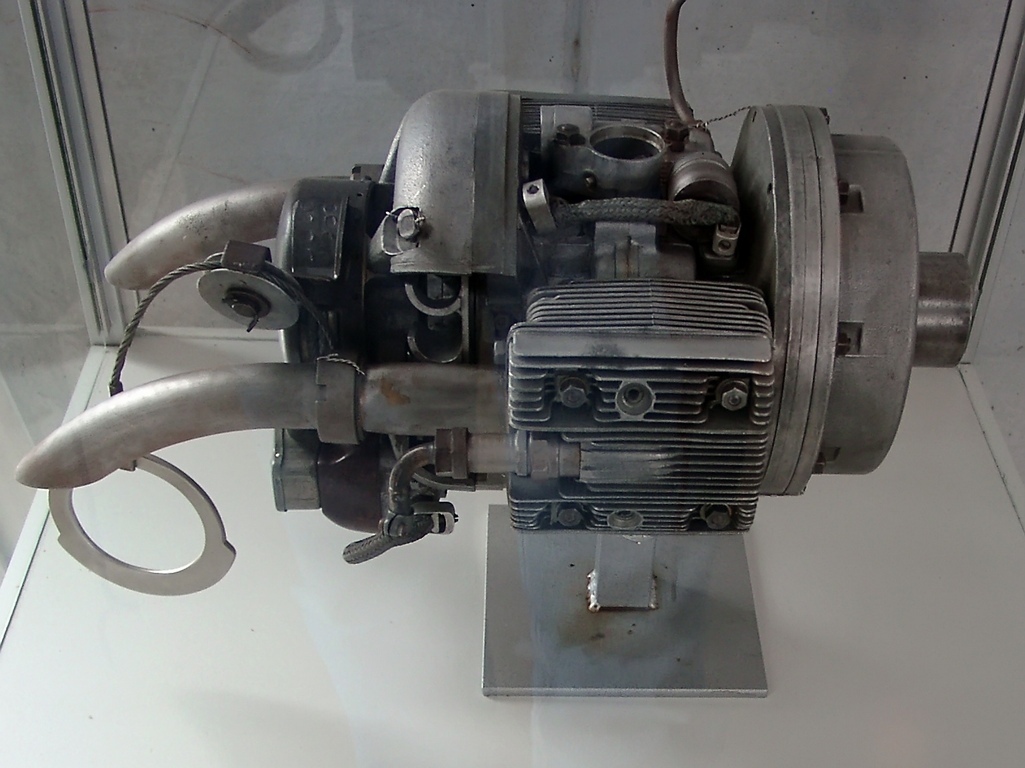 thumb|right|The Riedel APU installed on a preserved BMW 003 jet engine, with what appears to be an electric starter for the Riedel APU. During World War I, the British Coastal class blimps, one of several types of airship operated by the Royal Navy, carried a ABC auxiliary engine. These powered a generator for the craft's radio transmitter and, in an emergency, could power an auxiliary air blower. One of the first military fixed-wing aircraft to use an APU was the British, World War 1, Supermarine Nighthawk, an anti-Zeppelin Night fighter. During World War II, a number of large American military aircraft were fitted with APUs. These were typically known as ''putt–putts'', even in official training documents. The putt-putt on the B-29 Superfortress bomber was fitted in the unpressurised section at the rear of the aircraft. Various models of four-stroke, Flat-twin or V-twin engines were used. The engine drove a ''P2'', DC generator, rated 28.5 Volts and 200 Amps (several of the same ''P2'' generators, driven by the main engines, were the B-29's DC power source in flight). The putt-putt provided power for starting the main engines and was used after take-off to a height of . The putt-putt was restarted when the B-29 was descending to land. Some models of the B-24 Liberator had a putt–putt fitted at the front of the aircraft, inside the nose-wheel compartment. Some models of the Douglas C-47 Skytrain transport aircraft carried a putt-putt under the cockpit floor.

The first German jet engines built during the Second World War used a mechanical APU starting system designed by the German engineer Norbert Riedel. It consisted of a two-stroke flat engine, which for the Junkers Jumo 004 design was hidden in the intake diverter, essentially functioning as a pioneering example of an auxiliary power unit for starting a jet engine. A hole in the extreme nose of the diverter contained a manual pull-handle which started the piston engine, which in turn rotated the compressor. Two spark plug access ports existed in the Jumo 004's intake diverter to service the Riedel unit's cylinders in situ, for maintenance purposes. Two small "premix" tanks for the Riedel's petrol/oil fuel were fitted in the annular intake. The engine was considered an extreme short stroke (bore / stroke: 70 mm / 35 mm = 2:1) design so it could fit within the intake diverter of jet engines like the Jumo 004. For reduction it had an integrated planetary gear. It was produced by Victoria in Nuremberg and served as a mechanical APU-style starter for all three German jet engine designs to have made it to at least the prototype stage before May 1945: the Junkers Jumo 004, the BMW 003 (which uniquely appears to use an electric starter for the Riedel APU), and the prototypes (19 built) of the more advanced Heinkel HeS 011 engine, which mounted it just above the intake passage in the Heinkel-crafted sheetmetal of the engine nacelle nose. The Boeing 727 in 1963 was the first jetliner to feature a gas turbine APU, allowing it to operate at smaller airports, independent from ground facilities. The APU can be identified on many modern airliners by an exhaust pipe at the aircraft's tail.

The power section is the gas-generator portion of the engine and produces all the shaft power for the APU.

The load compressor is generally a shaft-mounted compressor that provides pneumatic power for the aircraft, though some APUs extract bleed air from the power section compressor. There are two actuated devices: the inlet guide vanes that regulate airflow to the load compressor and the surge control valve that maintains stable or surge-free operation of the turbo machine.

The gearbox transfers power from the main shaft of the engine to an oil-cooled generator for electrical power. Within the gearbox, power is also transferred to engine accessories such as the fuel control unit, the lubrication module, and cooling fan. There is also a starter motor connected through the gear train to perform the starting function of the APU. Some APU designs use a combination starter/generator for APU starting and electrical power generation to reduce complexity. On the Boeing 787 more-electric aircraft, the APU delivers only electricity to the aircraft. The absence of a pneumatic system simplifies the design, but high demand for electricity requires heavier generators. Onboard solid oxide fuel cell (SOFC) APUs are being researched.

On June 4, 2018, Boeing and Safran announced their 50-50 partnership to design, build and service APUs after regulatory and antitrust clearance in the second half of 2018. Boeing produced several hundred T50/T60 small turboshafts and their derivatives in the early 1960s. Safran produces helicopters and business jets APUs but stopped the large APUs since Labinal exited the APIC joint venture with Sundstrand in 1996.