The Austro-Prussian War or Seven Weeks' War, known in Germany as ("German War") and by a variety of other names, was fought in 1866 between the Austrian Empire and the Kingdom of Prussia, with each also being aided by various allies within the German Confederation. Prussia had also allied with the Kingdom of Italy, linking this conflict to the Third Independence War of Italian unification. The Austro-Prussian War was part of the wider rivalry between Austria and Prussia, and resulted in Prussian dominance over the German states. The major result of the war was a shift in power among the German states away from Austrian and towards Prussian hegemony. It resulted in the abolition of the German Confederation and its partial replacement by the unification of all of the northern German states in the North German Confederation that excluded Austria and the other Southern German states, a . The war also resulted in the Italian annexation of the Austrian province of Venetia.

The war erupted as a result of the dispute between Prussia and Austria over the administration of Schleswig-Holstein, which the two of them had conquered from Denmark and agreed to jointly occupy at the end of the Second Schleswig War in 1864. The crisis started on 26 January 1866, when Prussia protested the decision of the Austrian Governor of Holstein to permit the estates of the duchies to call up a united assembly, declaring the Austrian decision a breach of the principle of joint sovereignty. Austria replied on 7 February, asserting that its decision did not infringe on Prussia's rights in the duchies. In March 1866, Austria reinforced its troops along its frontier with Prussia. Prussia responded with a partial mobilization of five divisions on 28 March. Bismarck made an alliance with Italy on 8 April, committing it to the war if Prussia entered one against Austria within three months, which was an obvious incentive for Bismarck to go to war with Austria within three months to divert Austrian strength away from Prussia. Austria responded with a mobilization of its Southern Army on the Italian border on 21 April. Italy called for a general mobilization on 26 April and Austria ordered its own general mobilization the next day. Prussia's general mobilization orders were signed in steps on 3, 5, 7, 8, 10 and 12 May. When Austria brought the Schleswig-Holstein dispute before the German Diet on 1 June and also decided on 5 June to convene the Diet of Holstein on 11 June, Prussia declared that the Gastein Convention of 14 August 1865 had thereby been nullified and invaded Holstein on 9 June. When the German Diet responded by voting for a partial mobilization against Prussia on 14 June, Bismarck claimed that the German Confederation had ended. The Prussian Army invaded Hanover, Saxony and the Electorate of Hesse on 15 June. Italy declared war on Austria on 20 June.

For several centuries, Central Europe was split into a few large- or medium-sized states and hundreds of tiny entities, which while ostensibly being within the Holy Roman Empire ruled by the Holy Roman Emperor, operated in a largely independent fashion. When an existing Emperor died, seven secular and ecclesiastical princes, each of whom ruled at least one of the states, would elect a new Emperor. Over time the Empire became smaller and by 1789 came to consist of primarily German peoples (aside from Bohemia, Moravia, the southern Netherlands and Slovenia). Aside from five years (1740–1745), the Habsburg family, whose personal territory was Austria, controlled the Emperorship from 1440 to 1806, although it became increasingly ceremonial only as Austria found itself at war at certain times with other states within the Empire, such as Prussia, which in fact defeated Austria during the War of Austrian Succession to seize the state of Silesia in 1742. While Austria was traditionally considered the leader of the German states, Prussia became increasingly powerful and by the late 18th century was ranked as one of the great powers of Europe. Francis II's abolition of the office of Holy Roman Emperor in 1806 also deprived him of his imperial authority over most of German-speaking Europe, though little true authority remained by that time; he did, however, retain firm control of an extensive multi-ethnic empire (most of it outside the previous boundaries of the Holy Roman Empire). After 1815, the German states were once again reorganized into a loose confederation: the German Confederation, under Austrian leadership. Prussia had been contesting Austria's supremacy in Germany since at least 1850, when a war between the two powers had nearly erupted over Prussia's leadership of the Erfurt Union, though at that time Prussia had backed down. 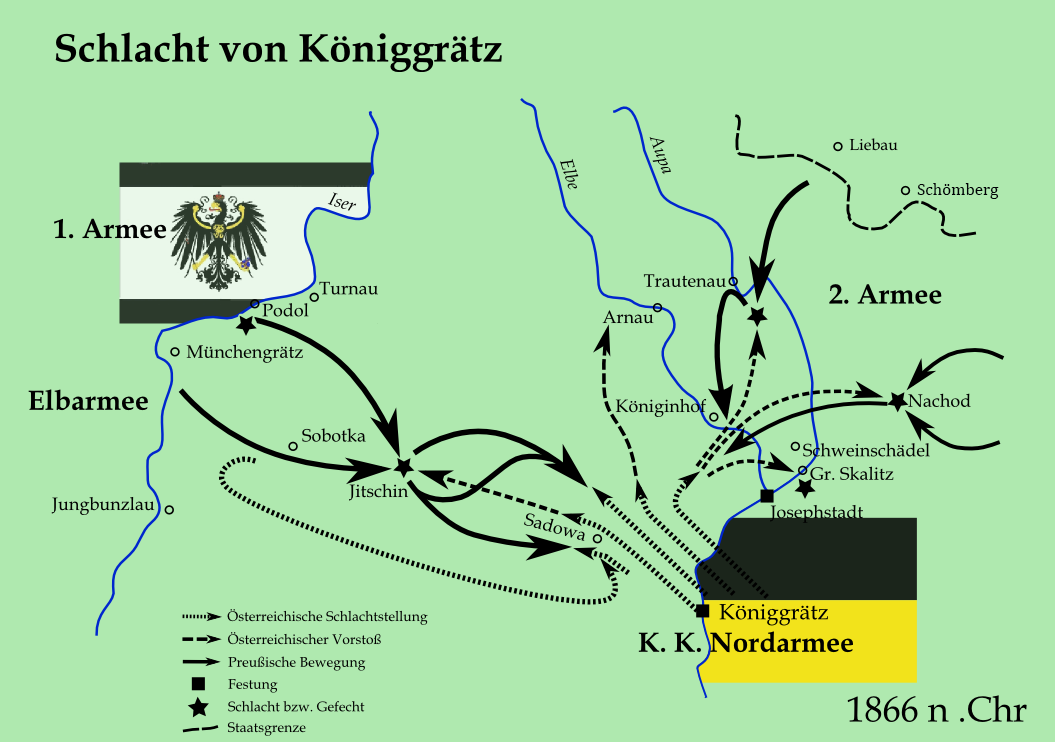 Partly in reaction to the triumphant French nationalism of Napoleon I and the organic feeling of commonality expressed during the Romantic era, German nationalism became a potent force during this period. The ultimate aim of most German nationalists was the gathering of all Germans under one state, although most accepted that the German portions of Switzerland would remain in Switzerland. Two ideas of national unity eventually came to the fore – one including and one excluding Austria.

There are many interpretations of Otto von Bismarck's behaviour before the Austrian-Prussian war, which concentrate mainly on the fact that he had a master plan that resulted in this war, the North German Confederation and the unification of Germany. Bismarck maintained that he orchestrated the conflict in order to bring about the North German Confederation, the Franco-Prussian War and the eventual unification of Germany. On 22 February 1866, Count Karolyi, Austrian ambassador in Berlin, sent a dispatch to the Minister of Foreign Affairs, Count Alexander Mensdorff-Pouilly. He explained to him that Prussian public opinion had become extremely sensitive about the Duchies issue and that he had no doubt that "this artificial exaggeration of the danger by public opinion formed an essential part of the calculations and actions of Count Bismarck ho consideredthe annexation of the Duchies ... a matter of life and death for his political existence nd wishedto make it appear such for Prussia too." Possible evidence can be found in Bismarck's orchestration of the Austrian alliance during the Second Schleswig War against Denmark, which can be seen as his diplomatic "masterstroke". Taylor also believes that the alliance was a "test for Austria rather than a trap" and that the goal was not war with Austria, contradicting what Bismarck later gave in his memoirs as his main reason for establishing the alliance. It was in the Prussian interest to gain an alliance with Austria to defeat Denmark and settle the issue of the duchies of Schleswig and Holstein. The alliance can be regarded as an aid to Prussian expansion, rather than a provocation of war against Austria. Many historians believe that Bismarck was simply a Prussian expansionist, rather than a German nationalist, who sought the unification of Germany. It was at the Gastein Convention that the Austrian alliance was set up to lure Austria into war. The timing of the Prusso-Italian alliance of 8 April 1866 was perfect, because all other European powers were either bound by alliances that forbade them from entering the conflict, or had domestic problems that had priority. Britain had no stake economically or politically in war between Prussia and Austria. Russia was unlikely to enter on the side of Austria, due to ill will over Austrian support of the anti-Russian alliance during the Crimean War and Prussia had stood by Russia during the January Uprising in Poland, signing the Alvensleben Convention of February 1863 with Russia, whereas Austria had not.

France was also unlikely to enter on the side of Austria, because Bismarck and Napoleon III met in Biarritz and allegedly discussed whether or not France would intervene in a potential Austro-Prussian war. The details of the discussion are unknown but many historians think Bismarck was guaranteed French neutrality in the event of a war. Italy was already allied with Prussia, which meant that Austria would be fighting both with no major allies of its own. Bismarck was aware of his numerical superiority but still "he was not prepared to advise it immediately even though he gave a favourable account of the international situation". When the Prussian victory became clear, France attempted to extract territorial concessions in the Palatinate and Luxembourg. In his speech to the Reichstag on 2 May 1871, Bismarck said: 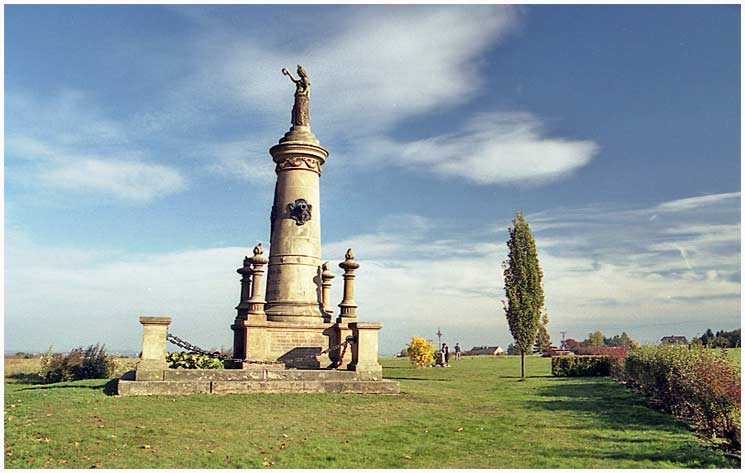