The Australian property bubble is the economic theory that the Australian property market has become or is becoming significantly overpriced and due for a significant downturn (also called a correction or collapse). Since the early 2010s, various commentators, including one Treasury official, have claimed the Australian property market is in a significant bubble. Various industry professionals have argued that it is not a bubble and that house prices have the potential to keep rising in line with income growth. Some commentators have blamed rising property prices on state governments' restrictions on land supply, driving up the cost of land, lots, and thus homes. Some have also blamed planning rules as acting to restrain supply of housing. A property bubble is a form of economic bubble normally characterised by a rapid increase in market prices of real property until they reach unsustainable levels relative to incomes and rents, and then decline. Australian house prices rose strongly relative to incomes and rents during the late 1990s and early 2000s; however, from 2003 to 2012 the price to income ratio and price to rent ratio have both remained fairly steady, with house prices tracking income and rent growth during that decade. Since 2012 prices have once again risen strongly relative to incomes and rents. In June 2014, the International Monetary Fund (IMF) reported that house prices in several developed countries are "well above the historical averages" and that Australia had the third highest house price-to-income ratio in the world. In June 2016, the Organisation for Economic Co-operation and Development (OECD) reported that Australia's housing boom could end in 'dramatic and destabilising' real estate hard landing. As of December 2018, Sydney and Melbourne along with some regional cities have experienced price declines of up to 10% over the year, with a further 10-20% forecast in the near future. Declines were largely triggered by the significant tightening of lending standards following the Royal Commission into Misconduct in the Banking, Superannuation and Financial Services Industry that revealed mortgage fraud aka subprime 'liar loans' and widespread irresponsible lending practices. Combined with the significant declines in Western Australia since 2014 due to the drop in global resource prices, there is mounting evidence that the housing bubble is entering the correction phase. 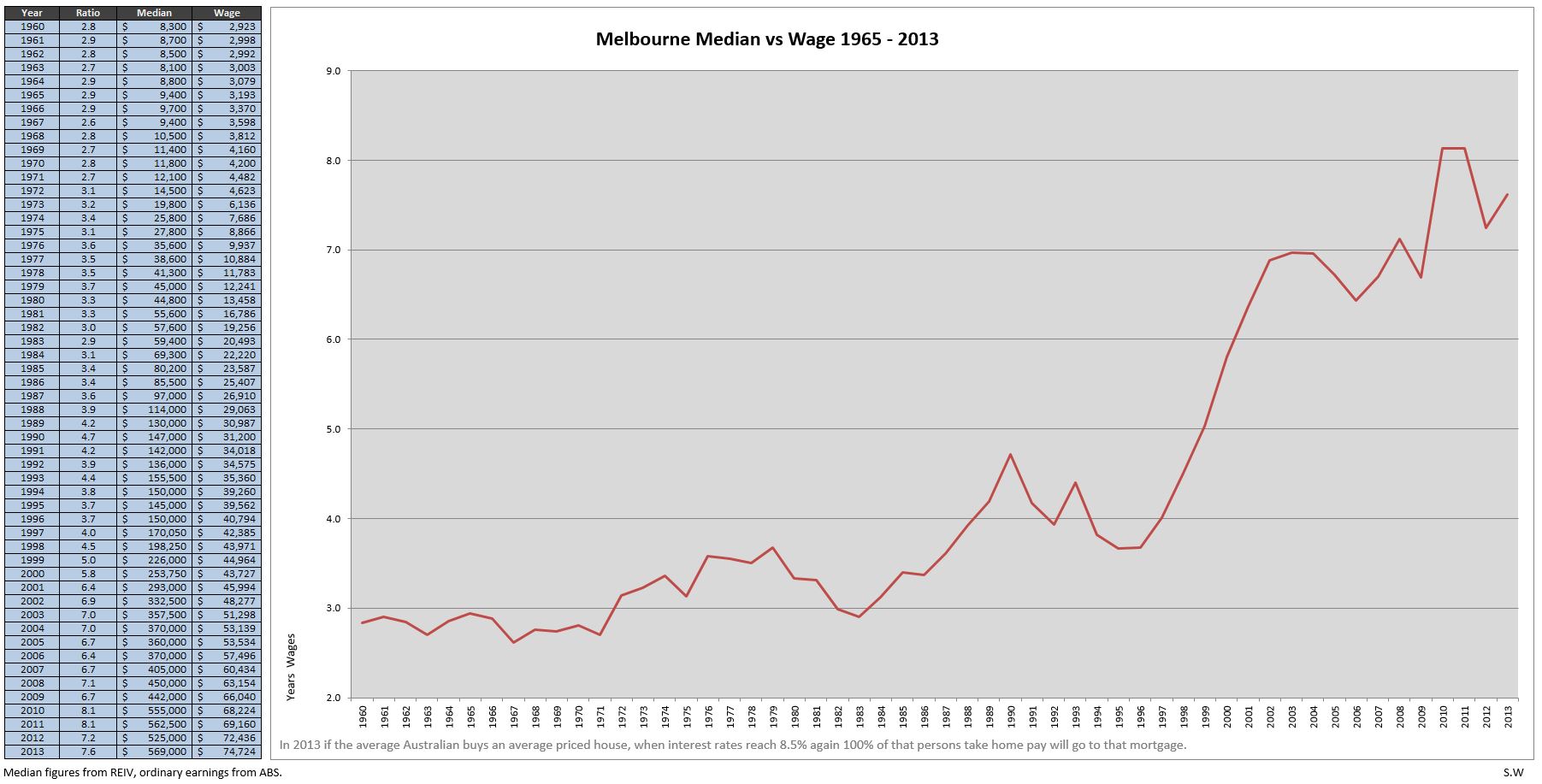 The Australian property market saw an average real price increase of around 0.5% per annum from 1890 to 1990, approximately matching CPI. Since the 1990s, however, prices have risen faster resulting in an elevated price to income ratio. In the late 2000s, house prices in Australia, relative to incomes, were at elevated levels similar to many comparable countries, prompting speculation that Australia was experiencing a real estate bubble like other comparable countries. Since then, several comparable countries have experienced property crashes.

All capital cities have seen strong increases in property prices since about 1998. Sydney and Melbourne have seen the largest price increases, with house prices rising 105% and 93.5% respectively since 2009. These massive increases in house prices coincide with record low wage growth, record low interest rates and record household debt equal to 130% of GDP. This indicates unsustainable growth in property, driven by ever higher debt levels fuelled by the RBA's then chief, Glenn Stevens who began cutting rates beginning in 2011. The ''Housing Affordability in Australia - Good house is hard to find'' report stated that "the average house price in the capital cities is now equivalent to over seven years of average earnings; up from three in the 1950s to the early 1980s. Some factors that may have contributed to the increase in property prices include: * greater availability of credit due to financial deregulation. * low interest rates since 2008, increasing borrowing capacity to borrow due to lower repayments. * limited government release of new land (reducing supply). * the average floor area of new houses has increased by up to 53.8% in the 18 years from 1984–85 to 2002–03. * a tax system that favours investors and existing home owners, with policies such as negative gearing and capital gain tax discounts. * government restrictions on the use of land preventing higher density land use. * government restrictions on greenfield development designed to encourage "urban densification". * high population growth (about double the world average in 2010- see Population growth rates chart). * 2008 foreign investment rule changes for temporary visa holders. * introduction by local councils of upfront infrastructure levies in the early 2000s. * implementation of government schemes such as the first home buyers and first home builders schemes, which increase demand and therefore prices (supply and demand).

Beginning in the 1980s, Australian states (who under the Constitution have control of environmental and land use issues) started progressively implementing more rigid planning laws that regulated the use of land. Planning laws often concentrated, after the 1990s, on restricting greenfield development in favour of "urban densification", or infill development. Land rationing is a system of banning development in all but designated areas, and can lead to extreme land price inflation if insufficient land is designated as allowed to be developed. The restrictive planning laws in Australia have used land rationing systems as part of the goal of restricting greenfield development in favour of infill development, but this inevitably lead to land prices, and thus house prices, rising significantly. There is good evidence to suggest that the price of a new unit of housing is the ultimate anchor of all housing in an area, so when planning laws that implemented land rationing severely drove up the cost of new homes, all other homes followed suit.

The Reserve Bank of Australia has noted that there are "a number of areas in which the taxation treatment in Australia is more favourable to investors than is the case in other countries." The main tax incentives include tax deductions for losses on investment properties, even those that have been negatively geared, and the 50% discount on capital gains on sale of investments properties. Investors using their superannuation for property investments have a tax advantage compared to 'savers' who are effectively taxed up to 45% (the top marginal taxation rate) on income from bank interest or bonds, as superannuation contributions are normally only taxed at around 15%. The list of tax payer funded supports to the property market are numerous * Federal ** Capital Gains Discount ** Negative Gearing ** Aged Pension Asset Test exclusion of Principle Home ** First Home Super Scheme (Discounted Tax Treatment of Voluntary Contributions) * State ** Stamp Duty Discounts *** First Home Owner Stamp Duty Exemption *** Land tax option alternative to Stamp Duty * Temporary supports ** HomeBuilder (Federal) - originally budgeted at $680m, estimated actual cost over $2 billion due to oversubscription

The influence of interest rates and banking policy on property prices has been noted. The financial deregulation has led to greater availability of credit and a variety of financial products and options. Presently the Reserve Bank of Australia has maintained for some time a low cash interest rate policy which has also reduced the cost of financing property purchase. In addition, the easy availability of interest-only loans has also made possible for property investors to borrow to purchase a property and compounding the benefits of negative gearing.

Land price inflation is a story of housing debt

Housing costs excluded from the CPI

One of the market distortions in the housing market relates to the calculation of the Consumer Price Index PI a key metric the RBA uses to make fiscal policy decisions such as setting interest rates. One senior economist noted "The index ignores price changes in the single biggest purchase a person (or household) is likely to make in their lifetime – a dwelling″. This implies that Australia's main official cost of living measure is failing to represent actual living costs, particularly for younger Australians who may incur substantial costs of purchasing a home.

A number of economists, such as Macquarie Bank analyst Rory Robertson, assert that high immigration and the propensity of new arrivals to cluster in the capital cities is exacerbating the nation's housing affordability problem. According to Robertson, Federal Government policies that fuel demand for housing, such as the currently high levels of immigration, as well as capital gains tax discounts and subsidies to boost fertility, have had a greater impact on housing affordability than land release on urban fringes.