Auckland ( mi|Tāmaki Makaurau) is a large metropolitan city in the North Island of New Zealand. The most populous urban area in the country, Auckland has an urban population of about It is located in the Auckland Region—the area governed by Auckland Council—which includes outlying rural areas and the islands of the Hauraki Gulf, and which has a total population of . While Europeans continue to make up the plurality of Auckland's population, the city became multicultural and cosmopolitan in the late-20th century, with Asians accounting for 31% of the city's population in 2018. Auckland is also home to the largest Polynesian population in the world. The Māori-language name for Auckland is ', meaning "Tāmaki desired by many", in reference to the desirability of its natural resources and geography. Auckland lies between the Hauraki Gulf to the east, the Hunua Ranges to the south-east, the Manukau Harbour to the south-west, and the Waitākere Ranges and smaller ranges to the west and north-west. The surrounding hills are covered in rainforest and the landscape is dotted with 53 dormant volcanic cones. The central part of the urban area occupies a narrow isthmus between the Manukau Harbour on the Tasman Sea and the Waitematā Harbour on the Pacific Ocean. Auckland is one of the few cities in the world to have a harbour on each of two separate major bodies of water. The isthmus on which Auckland sits was first settled and was valued for its rich and fertile land. The Māori population in the area is estimated to have peaked at 20,000 before the arrival of Europeans. After a British colony was established in New Zealand in 1840, William Hobson, then Lieutenant-Governor of New Zealand, chose Auckland as its new capital. He named the area for George Eden, Earl of Auckland, British First Lord of the Admiralty. Māori–European conflict over land in the region led to war in the mid-19th century. In 1865, Auckland was replaced by Wellington as the capital, but continued to grow, initially because of its port and the logging and gold-mining activities in its hinterland, and later because of pastoral farming (especially dairy farming) in the surrounding area, and manufacturing in the city itself. It has been the nation's largest city throughout most of its history. Today, Auckland's central business district is New Zealand's leading economic hub. The University of Auckland, founded in 1883, is the largest university in New Zealand. The city's significant tourist attractions include national historic sites, festivals, performing arts, sports activities, and a variety of cultural institutions, such as the Auckland War Memorial Museum, the Museum of Transport and Technology, and the Auckland Art Gallery Toi o Tāmaki). Its architectural landmarks include the Harbour Bridge, the Town Hall, the Ferry Building and the Sky Tower. The city is served by Auckland Airport, which handles around 2 million international passengers a month. Despite being one of the most expensive cities in the world, Auckland is recognised as one of the world's most liveable cities, ranked third in the 2019 Mercer Quality of Living Survey.

The isthmus was settled by Māori circa 1350, and was valued for its rich and fertile land. Many ''pā'' (fortified villages) were created, mainly on the volcanic peaks. The Māori population in the area is estimated to have been about 20,000 before the arrival of Europeans. The introduction of firearms at the end of the eighteenth century, which began in Northland, upset the balance of power and led to devastating intertribal warfare beginning in 1807, causing iwi who lacked the new weapons to seek refuge in areas less exposed to coastal raids. As a result, the region had relatively low numbers of Māori when settlement by European New Zealanders began. On 20 March 1840 in the Manukau Harbour area where Ngāti Whātua farmed, paramount chief Apihai Te Kawau signed ''Te Tiriti o Waitangi'' the Treaty of Waitangi. Ngāti Whātua sought British protection from Ngāpuhi as well as a reciprocal relationship with the Crown and the Church. Soon after signing the Treaty, Te Kawau offered land on the Waitematā Harbour to the new Governor of New Zealand, William Hobson, for his new capital, which Hobson named for George Eden, Earl of Auckland, then Viceroy of India. Auckland was founded on 18 September 1840 and was officially declared New Zealand's capital in 1841, and the transfer of the administration from Russell (now Old Russell) in the Bay of Islands was completed in 1842. However, even in 1840 Port Nicholson (later renamed Wellington) was seen as a better choice for an administrative capital because of its proximity to the South Island, and Wellington became the capital in 1865. After losing its status as capital, Auckland remained the principal city of the Auckland Province until the provincial system was abolished in 1876. 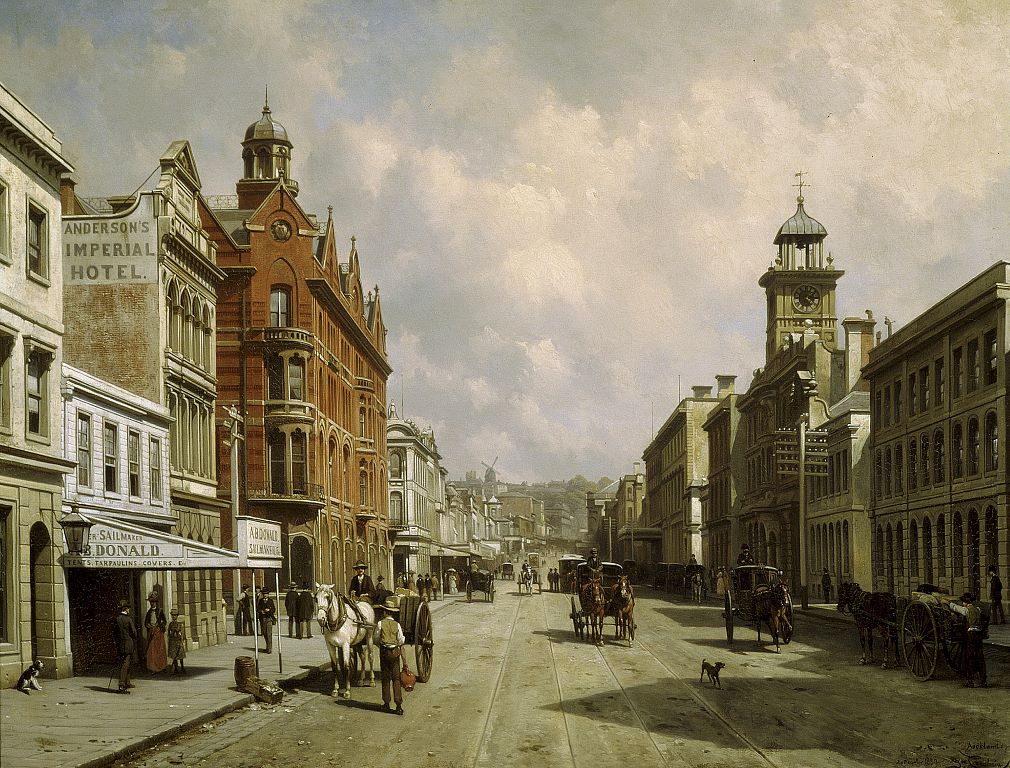 In response to the ongoing rebellion by Hōne Heke in the mid-1840s, the government encouraged retired but fit British soldiers and their families to migrate to Auckland to form a defence line around the port settlement as garrison soldiers. By the time the first Fencibles arrived in 1848, the Northern War had concluded. Outlying defensive towns were then constructed to the south, stretching in a line from the port village of Onehunga in the west to Howick in the east. Each of the four settlements had about 800 settlers; the men were fully armed in case of emergency, but spent nearly all their time breaking in the land and establishing roads. In the early 1860s, Auckland became a base against the Māori King Movement, and the 12,000 Imperial soldiers stationed there led to a strong boost to local commerce. This, and continued road building towards the south into the Waikato, enabled Pākehā (European New Zealanders) influence to spread from Auckland. The city's population grew fairly rapidly, from 1,500 in 1841 to 3,635 in 1845, then to 12,423 by 1864. The growth occurred similarly to other mercantile-dominated cities, mainly around the port and with problems of overcrowding and pollution. Auckland's population of ex-soldiers was far greater than that of other settlements: about 50 percent of the population was Irish, which contrasted heavily with the majority English settlers in Wellington, Christchurch or New Plymouth. Most of the Irish (though not all) were from Protestant Ulster. The majority of settlers in the early period were assisted by receiving cheap passage to New Zealand.

Trams and railway lines shaped Auckland's rapid expansion in the early first half of the 20th century. However, after the Second World War the city's transport system and urban form became increasingly dominated by the motor vehicle. Arterial roads and motorways became both defining and geographically dividing features of the urban landscape. They also allowed further massive expansion that resulted in the growth of suburban areas such as the North Shore (especially after the construction of the Auckland Harbour Bridge in the late 1950s), and Manukau City in the south. Economic deregulation in the mid-1980s led to dramatic changes to Auckland's economy and many companies relocated their head offices from Wellington to Auckland. The region was now the nerve centre of the national economy. Auckland also benefited from a surge in tourism, which brought 75 percent of New Zealand's international visitors through its airport. Auckland's port handled 31 percent of the country's container trade in 2015. The face of urban Auckland changed when the government's immigration policy began allowing immigrants from Asia in 1986. According to the 1961 census data, Māori and Pacific Islanders comprised 5 percent of Auckland's population; Asians less than 1 percent. By 2006 the Asian population had reached 18.0 percent in Auckland, and 36.2 percent in the central city. New arrivals from Hong Kong, Taiwan and Korea gave a distinctive character to the areas where they clustered, while a range of other immigrants introduced mosques, Hindu temples, halal butchers and ethnic restaurants to the suburbs.

The boundaries of Auckland are imprecisely defined. The Auckland urban area, as it is defined by Statistics New Zealand under the ''Statistical Standard for Geographic Areas 2018'' (SSGA18), spans 607.07 km2 (234.39 sq mi) and extends to Long Bay in the north, Swanson in the north-west, and Runciman in the south. The Hibiscus Coast is considered an urban area in its own right under SSGA18, having been included as part of the Auckland urban area under the previous standard (the ''New Zealand Statistical Area Classification 1992'' or NZSAC92). Auckland forms New Zealand's largest urban area. The Auckland urban area lies within the Auckland Region, an administrative region that takes its name from the city. The region encompasses the city centre, as well as suburbs, surrounding towns, nearshore islands, and rural areas north and south of the urban area. The Auckland central business district (CBD)—the city centre—is the most built-up area of the region. The CBD covers 433 hectares in a triangular area, and is bounded by the Auckland waterfront on the Waitematā Harbour and the inner-city suburbs of Ponsonby, Newton and Parnell. Auckland's metropolitan area is made up of over two hundred suburban areas. The outermost suburbs are Orewa in the north, Papakura in the south, Henderson in the west and Howick in the east. Beyond these suburbs lie the towns of Wellsford, Warkworth and Helensville to the north, and Clevedon, Pukekohe and Waiuku to the south.

Auckland lies on and around an isthmus, less than two kilometres wide at its narrowest point, between Mangere Inlet and the Tamaki River. There are two harbours surrounding this isthmus: Waitematā Harbour to the north, which opens east to the Hauraki Gulf and thence to the Pacific Ocean, and Manukau Harbour to the south, which opens west to the Tasman Sea. The total coastline of Auckland is long. Bridges span parts of both harbours, notably the Auckland Harbour Bridge crossing the Waitematā Harbour west of the central business district. The Mangere Bridge and the Upper Harbour Bridge span the upper reaches of the Manukau and Waitematā Harbours, respectively. In earlier times, portage paths crossed the narrowest sections of the isthmus. Several islands of the Hauraki Gulf are administered as part of the Auckland Region, though they are not part of the Auckland urban area. Parts of Waiheke Island effectively function as Auckland suburbs, while various smaller islands near Auckland are mostly zoned 'recreational open space' or are nature sanctuaries. Auckland also has a total length of approximately of rivers and streams, about 8 percent of these in urban areas.