Click Here for Items Related To - Attack on Pearl Harbor


The Attack on Pearl Harbor was a surprise military strike by the Imperial Japanese Navy Air Service upon the United States (a neutral country at the time) against the naval base at Pearl Harbor in Honolulu, Territory of Hawaii, just before 08:00, on Sunday morning, December 7, 1941. The attack led to the United States' formal entry into World War II the next day. The Japanese military leadership referred to the attack as the Hawaii Operation and Operation AI, and as Operation Z during its planning. Japan intended the attack as a preventive action to keep the United States Pacific Fleet from interfering with its planned military actions in Southeast Asia against overseas territories of the United Kingdom, the Netherlands, and the United States. Over the course of seven hours there were coordinated Japanese attacks on the U.S.-held Philippines, Guam, and Wake Island and on the British Empire in Malaya, Singapore, and Hong Kong. The attack commenced at 7:48 a.m. Hawaiian Time (18:18 GMT). The base was attacked by 353 Imperial Japanese aircraft (including fighters, level and dive bombers, and torpedo bombers) in two waves, launched from six aircraft carriers. Of the eight U.S. Navy battleships present, all were damaged, with four sunk. All but were later raised, and six were returned to service and went on to fight in the war. The Japanese also sank or damaged three cruisers, three destroyers, an anti-aircraft training ship, and one minelayer. A total of 188 U.S. aircraft were destroyed; 2,403 Americans were killed and 1,178 others were wounded. Important base installations such as the power station, dry dock, shipyard, maintenance, and fuel and torpedo storage facilities, as well as the submarine piers and headquarters building (also home of the intelligence section) were not attacked. Japanese losses were light: 29 aircraft and five midget submarines lost, and 64 servicemen killed. Kazuo Sakamaki, the commanding officer of one of the submarines, was captured. Japan announced declarations of war on the United States and the British Empire later that day (December 8 in Tokyo), but the declarations were not delivered until the following day. The British government declared war on Japan immediately after learning that their territory had also been attacked, while the following day (December 8) the United States Congress declared war on Japan. On December 11, despite the fact they had no formal obligation to do so under the Tripartite Pact with Japan, Germany and Italy each declared war on the U.S., which responded with a declaration of war against Germany and Italy. There were numerous historical precedents for the unannounced military action by Japan, but the lack of any formal warning, particularly while peace negotiations were still apparently ongoing, led President Franklin D. Roosevelt to proclaim December 7, 1941, "a date which will live in infamy". Because the attack happened without a declaration of war and without explicit warning, the attack on Pearl Harbor was later judged in the Tokyo Trials to be a war crime.

War between Japan and the United States had been a possibility that each nation had been aware of, and planned for, since the 1920s. Japan had been wary of American territorial and military expansion in the Pacific and Asia since the late 1890s, followed by the annexation of islands, such as Hawaii and the Philippines, which they felt were close to or within their sphere of influence. Although Japan had begun to take a hostile policy against the United States after the rejection of the Racial Equality Proposal, the relationship between the two countries was cordial enough that they remained trading partners. Tensions did not seriously grow until Japan's invasion of Manchuria in 1931. Over the next decade, Japan expanded into China, leading to the Second Sino-Japanese War in 1937. Japan spent considerable effort trying to isolate China and endeavored to secure enough independent resources to attain victory on the mainland. The "Southern Operation" was designed to assist these efforts. 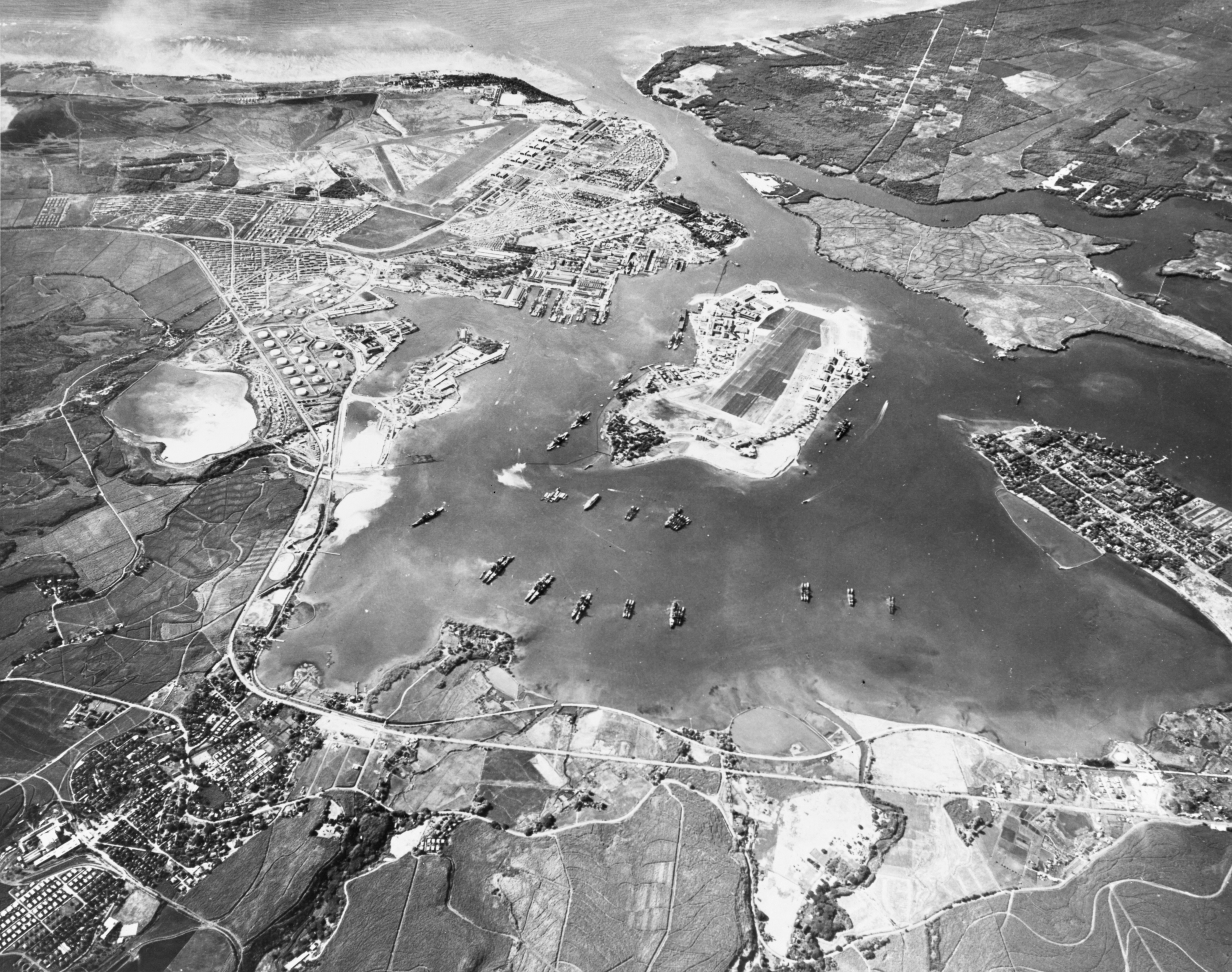 Starting in December 1937, events such as the Japanese attack on USS ''Panay'', the Allison incident, and the Nanking Massacre swung Western public opinion sharply against Japan. The U.S. unsuccessfully proposed a joint action with the British to blockade Japan. In 1938, following an appeal by President Roosevelt, U.S. companies stopped providing Japan with implements of war. In 1940, Japan invaded French Indochina, attempting to stymie the flow of supplies reaching China. The United States halted shipments of airplanes, parts, machine tools, and aviation gasoline to Japan, which the latter perceived as an unfriendly act. The United States did not stop oil exports, however, partly because of the prevailing sentiment in Washington that given Japanese dependence on American oil, such an action was likely to be considered an extreme provocation. In mid-1940, President Franklin D. Roosevelt moved the Pacific Fleet from San Diego to Hawaii. He also ordered a military buildup in the Philippines, taking both actions in the hope of discouraging Japanese aggression in the Far East. Because the Japanese high command was (mistakenly) certain any attack on the United Kingdom's Southeast Asian colonies, including Singapore, would bring the U.S. into the war, a devastating preventive strike appeared to be the only way to prevent American naval interference. An invasion of the Philippines was also considered necessary by Japanese war planners. The U.S. War Plan Orange had envisioned defending the Philippines with an elite force of 40,000 men; this option was never implemented due to opposition from Douglas MacArthur, who felt he would need a force ten times that size. By 1941, U.S. planners expected to abandon the Philippines at the outbreak of war. Late that year, Admiral Thomas C. Hart, commander of the Asiatic Fleet, was given orders to that effect. The U.S. finally ceased oil exports to Japan in July 1941, following the seizure of French Indochina after the Fall of France, in part because of new American restrictions on domestic oil consumption. Because of this decision, Japan proceeded with plans to take the oil-rich Dutch East Indies. On August 17, Roosevelt warned Japan that America was prepared to take opposing steps if "neighboring countries" were attacked. The Japanese were faced with a dilemma—either withdraw from China and lose face or seize new sources of raw materials in the resource-rich European colonies of Southeast Asia. Japan and the U.S. engaged in negotiations during 1941, attempting to improve relations. In the course of these negotiations, Japan offered to withdraw from most of China and Indochina after making peace with the Nationalist government. It also proposed to adopt an independent interpretation of the Tripartite Pact and to refrain from trade discrimination, provided all other nations reciprocated. Washington rejected these proposals. Japanese Prime Minister Konoye then offered to meet with Roosevelt, but Roosevelt insisted on reaching an agreement before any meeting. The U.S. ambassador to Japan repeatedly urged Roosevelt to accept the meeting, warning that it was the only way to preserve the conciliatory Konoye government and peace in the Pacific. However, his recommendation was not acted upon. The Konoye government collapsed the following month when the Japanese military rejected a withdrawal of all troops from China. Japan's final proposal, delivered on November 20, offered to withdraw from southern Indochina and to refrain from attacks in Southeast Asia, so long as the United States, United Kingdom, and Netherlands supplied one million gallons of aviation fuel, lifted their sanctions against Japan, and ceased aid to China., The American counter-proposal of November 26 (November 27 in Japan), the Hull note, required Japan completely evacuate China without conditions and conclude non-aggression pacts with Pacific powers. On November 26 in Japan, the day before the note's delivery, the Japanese task force left port for Pearl Harbor. The Japanese intended the attack as a preventive action to keep the United States Pacific Fleet from interfering with its planned military actions in Southeast Asia against overseas territories of the United Kingdom, the Netherlands, and the United States. Over the course of seven hours there were coordinated Japanese attacks on the U.S.-held Philippines, Guam, and Wake Island and on the British Empire in Malaya, Singapore, and Hong Kong.