In many Christian Denominations, an archbishop (, via Latin ''archiepiscopus'', from Greek , from -, 'chief', and 'over'+ 'seer') is a bishop of higher rank or office. In some cases, such as the Lutheran Church of Sweden and the Church of England, the title is borne by the leader of the denomination. In others, such as the Roman Catholic Church, there are many archbishops who either have jurisdiction over an ecclesiastical province in addition to their own Archdiocese (with some exceptions), or are otherwise granted a titular archbishopric.

The earliest appearance of neither the title nor the role can be traced. The title of "metropolitan" was apparently well known by the 4th century, when there are references in the canons of the First Council of Nicæa of 325 and Council of Antioch of 341, though the term seems to be used generally for all higher ranks of bishop, including patriarchs. The term "archbishop" does not appear in the modern sense until the 6th century, although the role, above ordinary bishops but below patriarchs, seems to be established for metropolitans by the 5th century.

Episcopal sees are generally arranged in groups in which one see's bishop has certain powers and duties of oversight over the others. He is known as the metropolitan archbishop of that see. In the Catholic Church
canon 436 of the Code of Canon Law
indicates what these powers and duties are for a Latin Church metropolitan archbishop, while those of the head of an autonomous (''sui iuris'') Eastern Catholic Churches are indicated i
canon 157
of the Code of Canons of the Eastern Churches. All Catholic metropolitans are archbishops, but not all archbishops are metropolitans, though most are.

Until 1970, a coadjutor archbishop, one who has special faculties and the right to succeed to the leadership of a see on the death or resignation of the incumbent, was assigned also to a titular see, which he held until the moment of succession. Since then, the title of Coadjutor Archbishop of the see is considered sufficient and more appropriate.

The rank of archbishop is conferred on some bishops who are not ordinaries of an archdiocese. They hold the rank not because of the see that they head but because it has been granted to them personally (''ad personam''). Such a grant can be given when someone who already holds the rank of archbishop is transferred to a see that, though its present-day importance may be greater than the person's former see, is not archiepiscopal. The bishop transferred is then known as the Archbishop-Bishop of his new see. An example is Gianfranco Gardin, appointed Archbishop-Bishop of Treviso on 21 December 2009. The title borne by the successor of such an archbishop-bishop is merely that of Bishop of the see, unless he also is granted the personal title of Archbishop.

The distinction between metropolitan sees and non-metropolitan archiepiscopal sees exists for titular sees as well as for residential ones. The ''Annuario Pontificio'' marks titular sees of the former class with the abbreviation ''Metr.'' and the others with ''Arciv.'' Many of the titular sees to which nuncios and heads of departments of the Roman Curia who are not cardinals are assigned are not of archiepiscopal rank. In that case the person who is appointed to such a position is given the personal title of archbishop (''ad personam''). They are usually referred to as Archbishop of the see, not as its Archbishop-Bishop.

If an archbishop resigns his see without being transferred to another, as in the case of retirement or assignment to head a department of the Roman Curia, the word ''emeritus'' is added to his former title, and he is called Archbishop Emeritus of his former see. Until 1970, such archbishops were transferred to a titular see. There can be several Archbishops Emeriti of the same see: The 2008 ''Annuario Pontificio'' listed three living Archbishops Emeriti of Taipei. There is no Archbishop Emeritus of a titular see: An archbishop who holds a titular see keeps it until death or until transferred to another see. In the Anglican Communion, retired archbishops formally revert to being addressed as "bishop" and styled "The Right Reverend", although they may be appointed "archbishop emeritus" by their province on retirement, in which case they retain the title "archbishop" and the style "The Most Reverend", as a right. Archbishop Desmond Tutu is a prominent example, as Archbishop Emeritus of Cape Town. Former archbishops who have not received the status of archbishop emeritus may still be informally addressed as "archbishop" as a courtesy, unless they are subsequently appointed to a bishopric (not an bishopric), in which case the courtesy ceases.

While there is no difference between the official dress of archbishops, as such, and that of other bishops, Roman Catholic metropolitan archbishops are distinguished by the use in liturgical ceremonies of the pallium, but only within the province over which they have oversight. Roman Catholic bishops and archbishops are styled "The Most Reverend" and addressed as "Your Excellency" in most cases. In English-speaking countries (except the United States), a Catholic archbishop is addressed as "Your Grace", while a Catholic bishop is addressed as "Your Lordship". Before December 12, 1930, the title "Most Reverend" was only for archbishops, while bishops were styled as "Right Reverend". This practice is still followed by Catholic bishops in the United Kingdom to mirror that of the Church of England. In Roman Catholic heraldry, an archbishop has an ecclesiastical hat called a galero with ten tassels on each side of his coat of arms, while a bishop has only six. The archiepiscopal cross behind the shield has two bars instead of one. Such a cross may be borne before him in liturgical processions. In processions and other occasions where strict protocol is observed, archbishops are ranked higher than diocesan bishops in the order of precedence. In the Anglican Communion, archbishops are styled "The Most Reverend" and addressed as "Your Grace", while bishops are styled "The Right Reverend" and addressed as "My Lord" or "Your Lordship". (In some countries, this usage is followed also by the Roman Catholic Church, but in others no distinction is made and "The Most Reverend" and "Your Excellency" are used for archbishops and bishops alike.) Anglican archbishops are entitled to be preceded by a server carrying an archiepiscopal processional cross (with two bars instead of one) in liturgical processions. The Archbishop of Canterbury's metropolitical processional cross is always carried before him by a priest-chaplain, and (like other archbishops) is a two-barred processional cross. However, the Archbishop of Canterbury is also entitled to be preceded by the ancient primatial cross of Canterbury (still in ceremonial use) which is of an ornate historical design, made of precious metal, and with precious stones inserted, but unlike his metropolitical cross (or those of other archbishops) it is not double-barred. 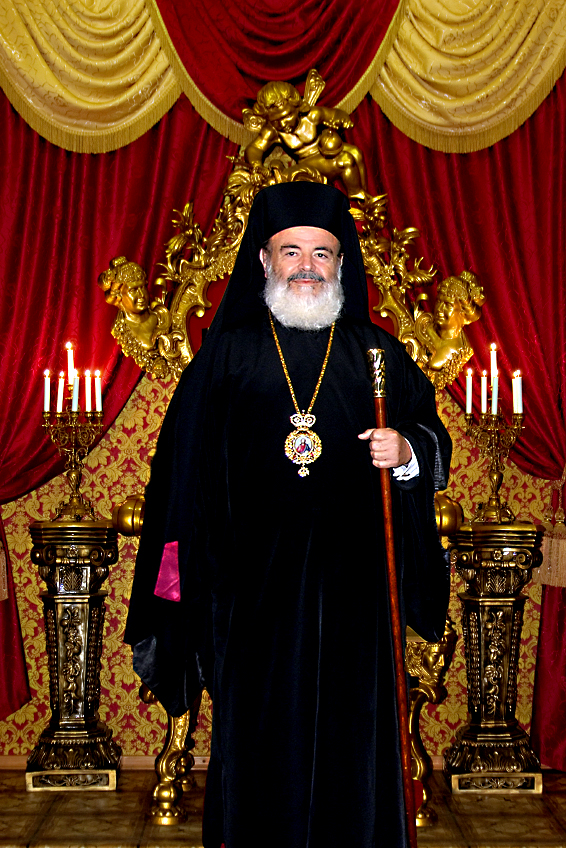 Archbishops exist in all traditional denominations of the Eastern Christianity, including Eastern Orthodox Church, Oriental Orthodox Churches, Eastern Catholic Churches and others.

The Oriental Orthodox custom generally agrees with the Slavic rather than the Greek with respect to the archbishop/metropolitan distinction.