thumb|upright=1.3|A trillion in 2018.]] An alcoholic drink is a [[drink]] that contains [[ethanol]], a type of [[alcohol]] produced by [[Ethanol fermentation|fermentation]] of grains, fruits, or other sources of sugar. The consumption of alcohol plays an important social role in many cultures. Most countries have laws regulating the production, sale, and consumption of alcoholic beverages. Some countries ban such activities entirely, but alcoholic drinks are legal in most parts of the world. The global alcoholic drink industry exceeded $1 trillion in 2018. Alcohol is a depressant, which in low doses causes euphoria, reduces anxiety, and increases sociability. In higher doses, it causes drunkenness, stupor, unconsciousness or death. Long-term use can lead to an alcohol use disorder, an increased risk of developing several types of cancer, and physical dependence. Alcohol is one of the most widely used recreational drugs in the world, and about 33% of all humans currently drink alcohol. In 2015, among Americans, 86% of adults had consumed alcohol at some point, with 70% drinking it in the last year and 56% in the last month. Alcoholic drinks are typically divided into three classes—beers, wines, and spirits—and typically their alcohol content is between 3% and 50%. Discovery of late Stone Age jugs suggest that intentionally fermented drinks existed at least as early as the Neolithic period (c. 10,000 BC). Several animals (but not all) are affected by alcohol similarly to humans and, once they consume it, will consume it again if given the opportunity, though humans are the only species known to produce alcoholic drinks intentionally. 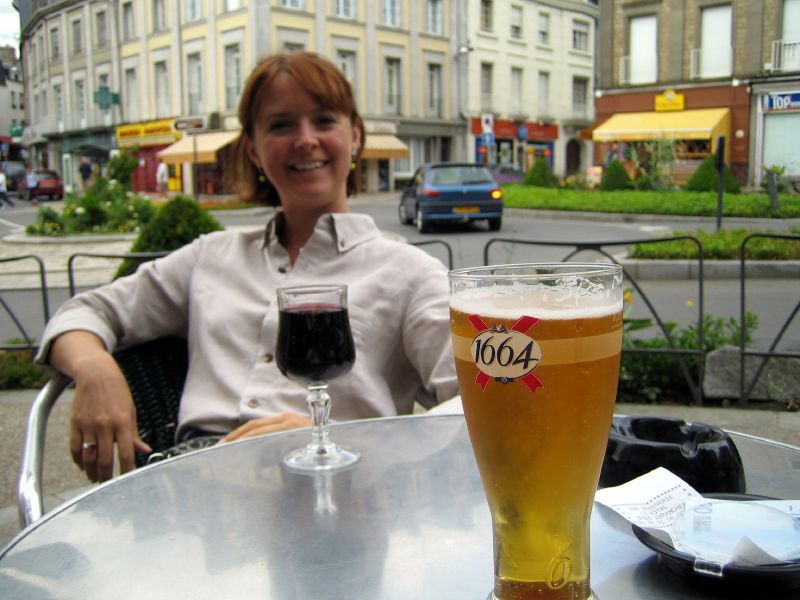 Beer is a beverage fermented from grain mash. It is typically made from barley or a blend of several grains and flavored with hops. Most beer is naturally carbonated as part of the fermentation process. If the fermented mash is distilled, then the drink becomes a spirit. In the Andean region, the most common beer is chicha, made from grain or fruits. Beer is the most consumed alcoholic beverage in the world.

Wine is a fermented beverage produced from grapes and sometimes other fruits. Wine involves a longer fermentation process than beer and a long aging process (months or years), resulting in an alcohol content of 9%–16% ABV.

Cider or cyder ( ) is a fermented alcoholic drink made from any fruit juice; apple juice (traditional and most common), peaches, pears ("Perry" cider) or other fruit. Cider alcohol content varies from 1.2% ABV to 8.5% or more in traditional English ciders. In some regions, cider may be called "apple wine".

Fermented tea (also known as post-fermented tea or dark tea) is a class of tea that has undergone microbial fermentation, from several months to many years. The tea leaves and the liquor made from them become darker with oxidation. Thus, the various kinds of fermented teas produced across China are also referred to as dark tea, not be confused with black tea. The most famous fermented tea is kombucha which is often homebrewed, pu-erh, produced in Yunnan Province, and the Anhua dark tea produced in Anhua County of Hunan Province. The majority of kombucha on the market are under 0.5% ABV.

Mead () is an alcoholic drink made by fermenting honey with water, sometimes with various fruits, spices, grains, or hops. The alcoholic content of mead may range from as low as 3% ABV to more than 20%. The defining characteristic of mead is that the majority of the drink's fermentable sugar is derived from honey. Mead can also be referred to as "honeywine."

Pulque is the Mesoamerican fermented drink made from the "honey water" of maguey, ''Agave americana''. The drink distilled from pulque is tequila or mescal Mezcal.

"Fruit wines" are made from fruits other than grapes, such as plums, cherries, or apples. Sparkling wine like French Champagne, Catalan Cava or Italian Prosecco can be made by means of a secondary fermentation.

Liquors (or spirits) are alcoholic drinks produced by distilling (i.e., concentrating by distillation) ethanol produced by means of fermenting grain, fruit, or vegetables. Unsweetened, distilled, alcoholic drinks that have an alcohol content of at least 20% ABV are called ''spirits''. For the most common distilled drinks, such as whiskey and vodka, the alcohol content is around 40%. The term ''hard liquor'' is used in North America to distinguish distilled drinks from undistilled ones (implicitly weaker). Vodka, gin, baijiu, shōchū, soju, tequila, whiskey, brandy and rum are examples of distilled drinks. Distilling concentrates the alcohol and eliminates some of the congeners. Freeze distillation concentrates ethanol along with methanol and fusel alcohols (fermentation by-products partially removed by distillation) in applejack. Fortified wine is wine, such as port or sherry, to which a distilled beverage (usually brandy) has been added. Fortified wine is distinguished from spirits made from wine in that spirits are produced by means of distillation, while fortified wine is simply wine that has had a spirit added to it. Many different styles of fortified wine have been developed, including port, sherry, madeira, marsala, commandaria, and the aromatized wine vermouth.

Rectified spirit, also called "neutral grain spirit", is alcohol which has been purified by means of "rectification" (i.e. repeated distillation). The term ''neutral'' refers to the spirit's lack of the flavor that would have been present if the mash ingredients had been distilled to a lower level of alcoholic purity. Rectified spirit also lacks any flavoring added to it after distillation (as is done, for example, with gin). Other kinds of spirits, such as whiskey, are distilled to a lower alcohol percentage to preserve the flavor of the mash. Rectified spirit is a clear, colorless, flammable liquid that may contain as much as 95% ABV. It is often used for medicinal purposes. It may be a grain spirit or it may be made from other plants. It is used in mixed drinks, liqueurs, and tinctures, and also as a household solvent.

In the alcoholic drinks industry, congeners are substances produced during fermentation. These substances include small amounts of chemicals such as occasionally desired other alcohols, like propanol and 3-methyl-1-butanol, but also compounds that are never desired such as acetone, acetaldehyde and glycols. Congeners are responsible for most of the taste and aroma of distilled alcoholic drinks, and contribute to the taste of non-distilled drinks. It has been suggested that these substances contribute to the symptoms of a hangover. Tannins are congeners found in wine in the presence of phenolic compounds. Wine tannins add bitterness, have a drying sensation, taste herbaceous and are often described as astringent. Wine tannins adds balance, complexity, structure and makes a wine last longer, so they play an important role in the aging of wine.

Alcoholic drinks are a source of food energy. The USDA uses a figure of per gram of alcohol ( per ml) for calculating food energy. In addition to alcohol, many alcoholic drinks contain carbohydrates. For example, in of 5% ABV beer, along with approximately 18 ml of alcohol (), there are usually 10–15 g of carbohydrates (about ). Excessive daily calorie intake may contribute to an increase in body weight and "beer belly". In addition to the direct effect of its caloric content, alcohol is also known to potentiate the insulin response of the human body to glucose, which, in essence, "instructs" the body to convert consumed carbohydrates into fat and to suppress carbohydrate and fat oxidation. Ethanol is directly processed in the liver to acetyl CoA, the same intermediate product as in glucose metabolism. Because ethanol is mostly metabolized and consumed by the liver, chronic excessive use can lead to fatty liver. This leads to a chronic inflammation of the liver and eventually alcoholic liver disease. 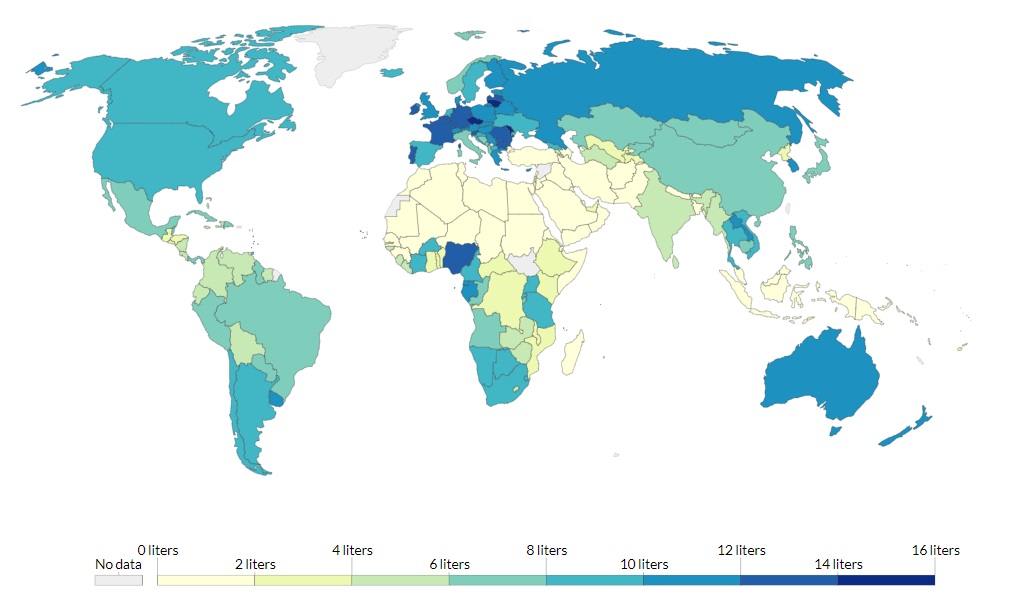 The average number of people who drink was 39% for males and 25% for females (2.4 billion people in total).