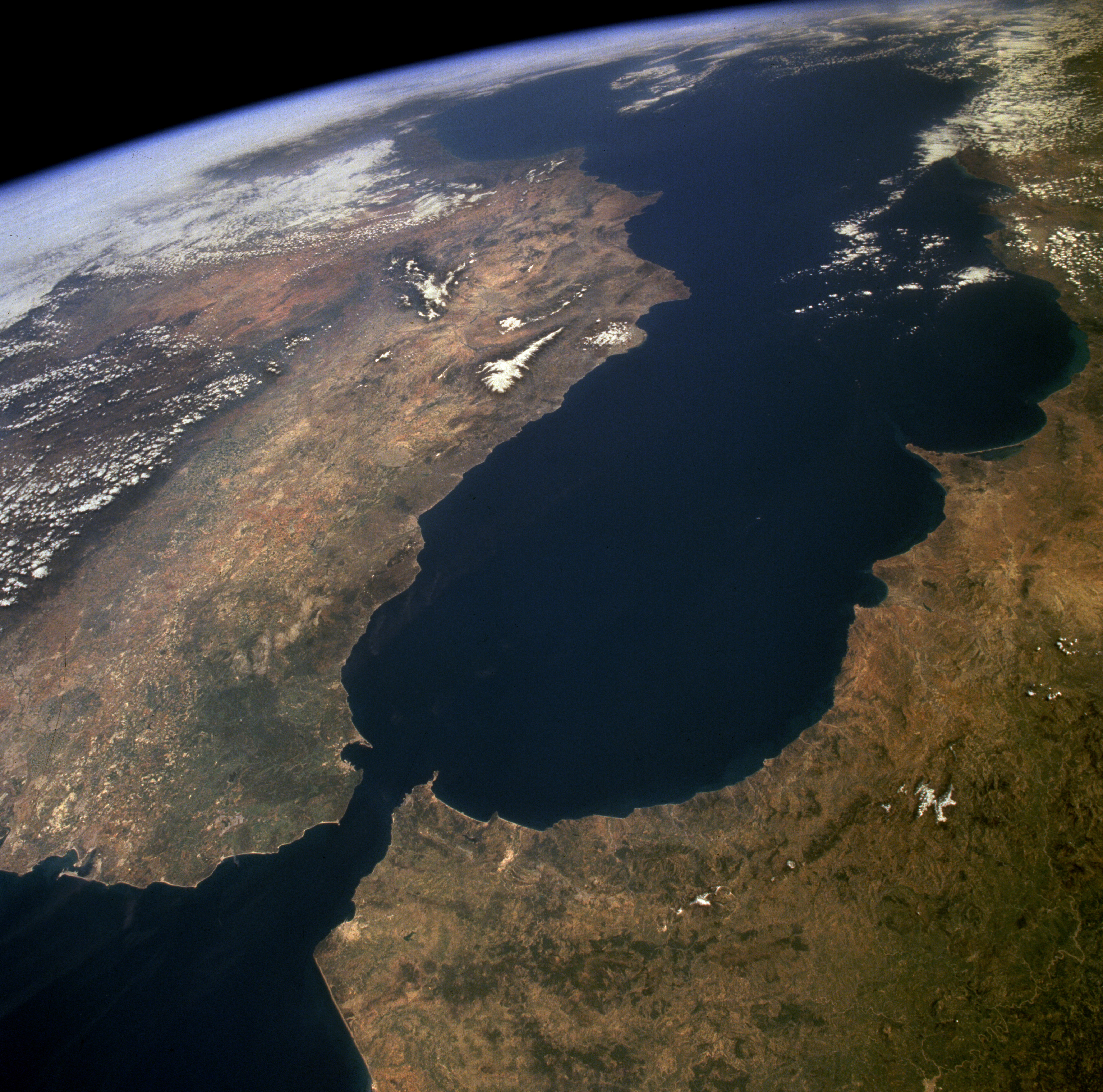 Its average depth is and maximum depth is . The International Hydrographic Organization defines the limits of the Alboran Sea as follows:

Several small islands dot the sea, including the eponymous Isla de Alborán. Most, even including those close to the African shore, belong to Spain.

The Alboran domain, the seafloor beneath the Alboran Sea (known as the internal zones) together with the surrounding mountains (known as the external zones; the Gibraltar Arc and Atlas Mountains), is mostly made of continental crust and marks the westernmost terminus of the terranes that were subducted between the African and Eurasian Plates when the Tethys Ocean closed. Reoccurring earthquakes at a depth of about indicates that this subduction is ongoing and that complex interactions between the lithosphere and mantle are forming the region. The internal zones are made of Late Paleozoic to Triassic rocks that were piled up during the Tertiary and has been extended since the Early Miocene. The seafloor is morphologically complex with several sub-basins, including three main sub-basins named West, East, and South Alboran Basins, ridges, and seamounts. The most prominent structure in the Alboran Sea is the -long Alboran Ridge which stretches southwest from the volcanic Alborán Island.

Surface currents in the Alboran Sea, influenced by the prevailing winds, flow eastward, bringing water from the Atlantic into the Mediterranean; deeper subsurface currents flow westward, carrying saltier Mediterranean water over the Gibraltar sill into the Atlantic. Thus there is typically a vertical rotary circulation, also known as a gyre, in the Alboran Sea as a result of this exchange of water.

The Alboran Sea is a transition zone between ocean and sea, containing a mix of Mediterranean and Atlantic species. The Alboran Sea is habitat for the largest population of bottlenose dolphins in the western Mediterranean, is home to the last population of harbour porpoises in the Western Mediterranean, and is the most important feeding grounds for loggerhead sea turtles in Europe. The Alboran sea also hosts important commercial fisheries, including sardines and swordfish. In 2003, the World Wildlife Fund raised concerns about the widespread drift net fishing endangering populations of dolphins, turtles, and other marine animals. An arc of mountains, known as the Gibraltar Arc, wraps around the northern, western, and southern sides of the Alboran Sea. The Gibraltar Arc is made up of the Baetic Cordillera of southern Spain and the Rif Mountains of Morocco. These mountains, known to ecologists as the Baetic-Rifan complex, comprise one of the Mediterranean's biodiversity hotspots; like the Alboran Sea, the Baetic-Rifan complex represents a transition between the Mediterranean and Atlantic (Macaronesian) ecological zones. The moderating influence of the Atlantic has allowed many relict species in the Baetic and Rif mountains to survive the climatic fluctuations of the last few million years that have caused them to become extinct elsewhere around the Mediterranean basin.