Click Here for Items Related To - Air Force One


Air Force One is the official air traffic control call sign for a United States Air Force aircraft carrying the President of the United States. In common parlance, the term is used to denote U.S. Air Force aircraft modified and used to transport the President. The aircraft are prominent symbols of the American presidency and its power. Air Force One is commonly referred to as “The Flying White House”. The idea of designating specific military aircraft to transport the President arose after the Boeing 314 ''Dixie Clipper'' flight in 1943, when officials of the United States Army Air Forces, the predecessor to the U.S. Air Force, became concerned about using commercial airlines for presidential travel. A C-87 Liberator Express was reconfigured for use as the first dedicated VIP-and-presidential transport aircraft and named ''Guess Where II'', but the Secret Service rejected it because of its safety record. A C-54 Skymaster was then converted for presidential use; dubbed the ''Sacred Cow'', it carried President Franklin D. Roosevelt to the Yalta Conference in February 1945 and was used for another two years by President Harry S. Truman. The "Air Force One" call sign was created in 1953, after a Lockheed Constellation named ''Columbine II'' carrying President Dwight D. Eisenhower entered the same airspace as a commercial airline flight using the same flight number. Other aircraft designated as Air Force One have included another Lockheed Constellation, ''Columbine III'', and two Boeing 707s, introduced in the 1960s and 1970s. Since 1990, the presidential fleet has consisted of two Boeing VC-25As: highly customized Boeing 747-200B aircraft. The U.S. Air Force has ordered two Boeing 747-8s to serve as the next presidential aircraft.

On October 11, 1910, Theodore Roosevelt became the first U.S. president to fly in an aircraft, an early Wright Flyer from Kinloch Field near St. Louis, Missouri. He was no longer in office at the time, having been succeeded by William Howard Taft. The record-making occasion was a brief overflight of the crowd at a county fair but was nonetheless the beginning of presidential air travel. Before World War II, overseas and cross-country presidential travel was rare. The lack of wireless telecommunication and available modes of transportation made long-distance travel impractical, as it took too much time and isolated the president from events in Washington, D.C. Railroads were a safer and more reliable option if the president needed to travel to distant states. By the late 1930s, with the arrival of aircraft such as the Douglas DC-3, increasing numbers of the U.S. public saw passenger air travel as a reasonable mode of transportation. All-metal aircraft, more reliable engines, and new radio aids to navigation had made commercial airline travel safer and more convenient. Life insurance companies even began to offer airline pilots insurance policies, albeit at extravagant rates, and many commercial travelers and government officials began using the airlines in preference to rail travel, especially for longer trips.

Franklin D. Roosevelt was the first president to fly in an aircraft while in office. The first aircraft obtained specifically for presidential travel was a Douglas Dolphin amphibian delivered in 1933 which was designated RD-2 by the US Navy and based at the naval base at Anacostia D.C. The Dolphin was modified with luxury upholstery for four passengers and a small separate sleeping compartment. The aircraft remained in service as a presidential transport from 1933 until 1939. There are no reports, however, on whether the president actually flew in the aircraft. During World War II, Roosevelt traveled on the ''Dixie Clipper'', a Pan Am-crewed Boeing 314 flying boat to the 1943 Casablanca Conference in Morocco, a flight that covered 5,500 miles (8,890 km) in three legs. The threat from the German submarines throughout the Battle of the Atlantic made air travel the preferred method of VIP transatlantic transportation. Concerned about relying upon commercial airlines to transport the president, USAAF leaders ordered the conversion of a military aircraft to accommodate the special needs of the commander-in-chief. The first dedicated aircraft proposed for presidential use was a C-87A VIP transport aircraft. This aircraft, number ''41-24159'', was modified in 1943 for use as a presidential VIP transport, the ''Guess Where II'', intended to carry President Franklin D. Roosevelt on international trips. Had it been accepted, it would have been the first aircraft to be used in presidential service. However, after a review of the C-87's highly controversial safety record in service, the Secret Service flatly refused to approve the ''Guess Where II'' for presidential carriage. As the C-87 was a derivative of the Consolidated B-24 Liberator bomber, it presented strong offensive impressions to enemy fighter aircraft as well as foreign destinations visited, an issue not present with airplanes that were used purely for transport. The ''Guess Where II'' was used to transport senior members of the Roosevelt administration on various trips. In March 1944, it transported Eleanor Roosevelt on a goodwill tour of several Latin American countries. The C-87 was scrapped in 1945. The Secret Service subsequently reconfigured a Douglas C-54 Skymaster for presidential transport duty. The VC-54C aircraft, nicknamed the ''Sacred Cow'', included a sleeping area, radio telephone, and retractable elevator to lift Roosevelt in his wheelchair. As modified, the VC-54C was used by President Roosevelt only once before his death, on his trip to the Yalta Conference in February 1945. ''Sacred Cow'' is now on display at the National Museum of the United States Air Force at Wright-Patterson AFB, Ohio. 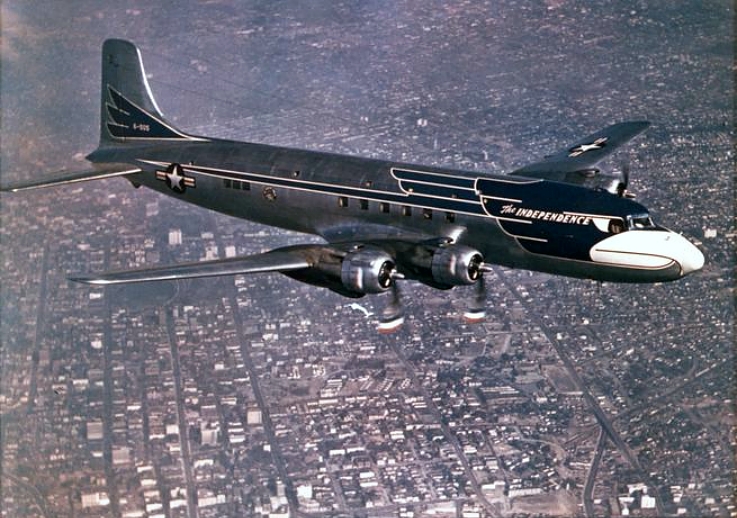 The National Security Act of 1947, the legislation that created the U.S. Air Force, was signed by President Harry S. Truman while on board the VC-54C. He replaced the VC-54C in 1947 with a modified C-118 Liftmaster, calling it the ''Independence'' after his Missouri hometown. It was given a distinctive exterior, as its nose was painted like the head of a bald eagle. The plane, which included a stateroom (where aft fuselage had been originally) and a main cabin that could seat 24 passengers or could be made up into 12 sleeper berths, is now housed at the National Museum of the United States Air Force in Dayton, Ohio. Eisenhower introduced four propeller-driven aircraft to presidential service. This group included two Lockheed C-121 Constellations, aircraft ''Columbine II'' (VC-121A 48-610) and ''Columbine III'' (VC-121E 53-7885). They were named by First Lady Mamie Eisenhower for the columbine, official state flower of her adopted home state of Colorado. In addition, two Aero Commanders were also added to the fleet.