Click Here for Items Related To - Agriculture in Albania 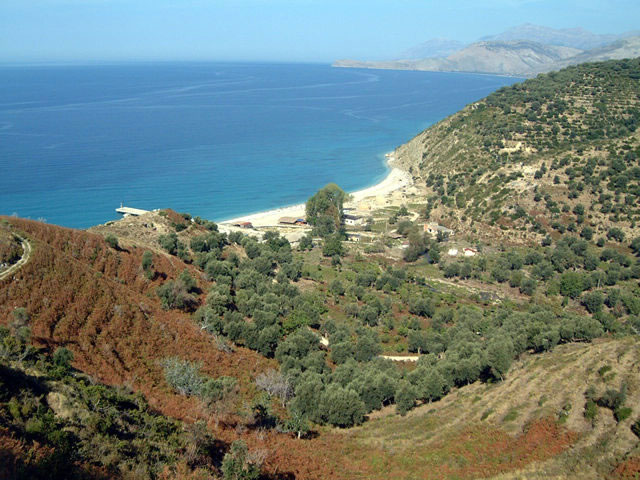 Agriculture in Albania is still a significant sector of the economy of Albania, which contributes to 22.5% of the country's GDP. The country spans of which 24% is agricultural land, 36% forest land, 15% pasture and meadow and 25% urban areas including lakes, waterways, unused rocky and mountain land. It can be separated into three main zones such as the lowland zone alongside the coastline of the country, the hill zone in the lowland and the mountain zone. The country encompasses coastal plains in the west to the Albanian Alps in the north, the Sharr Mountains in the northeast, Skanderbeg Mountains in the center, Korab Mountains in the east, Pindus Mountains in the southeast and Ceraunian Mountains in the southwest along the Albanian Riviera. The Mediterranean Sea, which includes the Adriatic and Ionian, makes up the entire west border of Albania. The country experiences mostly mediterranean climate with continental influences. That means that the climate is characterised by mild winters and hot, dry summers. The warmest areas of the country are along the west, where climate is profoundly impacted by the sea. The coldest parts of the country are at the north and east, where snowy forested climate is prevalent. In 1990, domestic farm products accounted for 63% of household expenditures and 25% of exports. As part of the pre-accession process of Albania to the European Union, farmers are being aided through IPA funds to improve the Albanian agriculture standards. As of the Ministry of Agriculture the exports of vegetables and fruits have doubled over the first months of 2017. However, the exports of fish, seafood and marine products have also increased by 35 percent. One of the earliest farming sites in Europe has been found in Southeastern Albania.

Both the Adriatic and Ionian Sea inside the Mediterranean Sea are a source of salt water fishing, while fresh water fishing occurs on Lake Butrint, Lake Shkodër, Lake Ohrid, Lake Prespa as well as in Karavasta Lagoon, Narta Lagoon and Patos Lagoon. The country's coast is estimated to be long. The country's great availability of water gives the underdeveloped fishing industry great potential to become a major part of the local economy. Although the fishing industry is still in a transition process despite significant development and processing capacities inherited from the past.

Extensive marine fish cultivation has been practiced in the country in the 1950s. The marine finfish industry is an inshore and offshore sea cage-farming sector. Trouts are developed mainly in the southeast, southwest and north, while carps are primary found in the center and north. Marine finfish culture is dominated by species including rainbow trout, european bass, gilt-head bream, common carp, silver carp, bighead carp, grass carp and ohrid trout. Mussels are widespread throughout the south of the country and particularly cultivated in Lake Butrint along the proximity to the Ionian Sea. In 1980, almost 80 mussel cultivation facilities were constructed with an average production of about 2,000 tonnes per year, while in 1989 it increased to 5,000 tonnes per year. Although in Shëngjin operates as well a smaller facility of about 100 hectares. Following the end of communism and outbreak of cholera in 1990, the production declined sharply and opened again in 2000. The cultivation of shrimps began around the end of communism in Albania. The country's only extensive shrimp cultivation facility is located in Narta Lagoon, whence the Vjosa River drains into the Adriatic Sea. Within the Karaburun-Sazan Marine Park, there has been 50 species of crustaceans recorded which indicates that the region is a potential location for cultivation.

Albania is the 42nd largest producer of wine in the world. The country has one of Europe`s longest history of viticulture and belongs chronologically to the old world of wine producing countries. The most important wine regions of the country are located in the center but also the mountainous areas in the north, east and south. Following the end of communism in the 20th century, the development and fortunes of the Albanian wine industry were deeply influenced by the economic influences of the country. In 1912, gained widespread popularity among the local population but was almost destroyed in 1933 by phylloxera. A significant upturn began only after the Second World War, at the end of which wine was still cultivated on only . The most producing region of wine was Durrës County, where grapes was grown on communist state enterprises. In that time the nationwide acreage corresponded approximately to that of tobacco, but was significantly lower than that of olive and fruit trees. The exported wine was consumed primarily in Western Europe such as in Germany. Moreover, the exports of wine decreased continuously from 61,000 hectoliters in 1971 to 22,000 hectoliters in 1985. The reasons are to be found mainly in outdated production conditions and insufficient technical material that made it difficult to transport and lowered the quality. On the other hand, the export of easily transportable graisins was continuously in increase (up to 3500 tons per year), while the export of fresh grapes was marginal.

Albania produces a wide variety of fruits, nuts and vegetables, while its production is constantly growing.

Diku, Abdulla. OPTIONS FOR GHG MITIGATION IN THE AGRICULTURE SECTOR IN ALBANIA, March 2012