The Toronto Coach Terminal is the central bus station for inter-city services in Toronto, Ontario, Canada. It is located at 610 Bay Street, in the city's downtown. Opened in 1931 as the Gray Coach Terminal, the Art Deco style terminal was home base for Gray Coach, an interurban bus service then owned by the Toronto Transit Commission (TTC). It replaced an earlier open air terminal, the Gray Line Terminal. The terminal is used today by Coach Canada, Greyhound Canada, and Ontario Northland bus lines.

The building was first opened as the Gray Coach Terminal in 1931, to serve as the terminal hub for the Toronto Transit Commission's (TTC) Gray Coach, replacing an open air terminal that had operated at the same location. The Art Deco building was a two-storey historic building with four platform bays, designed by architect Charles B. Dolphin. It was later expanded to seven bay platforms. The building has been listed in the City of Toronto's heritage buildings register since May 19, 1987. In 1984, the building containing the east bus bays was renovated by demolishing the internal walls and keeping the external north and west walls intact, a process known as facadism. An annex, located to the west of the main terminal building on Elizabeth Street, houses buses using the terminal. A renovation of the main terminal building occurred in 1990 to create more seating for waiting passengers and an upstairs restaurant, which has since been closed with railings overlooking main floor enclosed with glass. The newer west annex was originally built to handle GO Transit bus arrivals and departures but with the relocation of GO buses to the new Union Station Bus Terminal on Front Street in 2003, the annex now handles arrivals for the remaining bus lines, and departures leave from the main terminal, which is rather unusual for bus terminals or other passenger transportation infrastructure. The terminal is owned by Toronto Coach Terminal Inc., a wholly owned subsidiary of the Toronto Transit Commission (TTC). The TTC managed the station directly until July 8, 2012, when it was leased out in its entirety to bus lines Coach Canada and Greyhound Canada for annually.

Metrolinx, the government agency that oversees transit in the Greater Toronto and Hamilton Area, plans to construct a new intercity bus terminal, which would ideally replace both the Coach Terminal and Union Station Bus Terminal and house GO Transit buses, Greyhound and Coach Canada in one location. The Coach Terminal proposed that a new facility be built at the terminal's current location combining the original terminal and the Elizabeth Street annex into one structure that could fit double the current number of bus bays. However, in September 2014 Metrolinx announced plans to relocate the Union Station Bus Terminal to a new terminal in the currently under-construction CIBC Square office development located at 81 Bay Street. The relocation of intercity bus service from the Coach Terminal to the new station is under negotiation. In April 2017, TTC staff proposed for the terminal to be declared surplus when Coach Canada and Greyhound Canada vacate the terminal. The city agency Build Toronto is interested in acquiring the property for redevelopment.

The Toronto Coach Terminal is located one block west of Dundas subway station and is connected to it via the underground PATH network. It is also about the same distance from St. Patrick subway station. The bus platforms are located on Edward Street, on the west side of the terminal building. A small side entrance on the west side of Elizabeth Street is connected to the main concourse area on Bay Street by a corridor behind the bus platforms. Nearby landmarks include the Toronto Eaton Centre, the Atrium on Bay, the Hospital for Sick Children, and the Toronto City Hall and Nathan Phillips Square. It is also within walking distance of Chinatown. 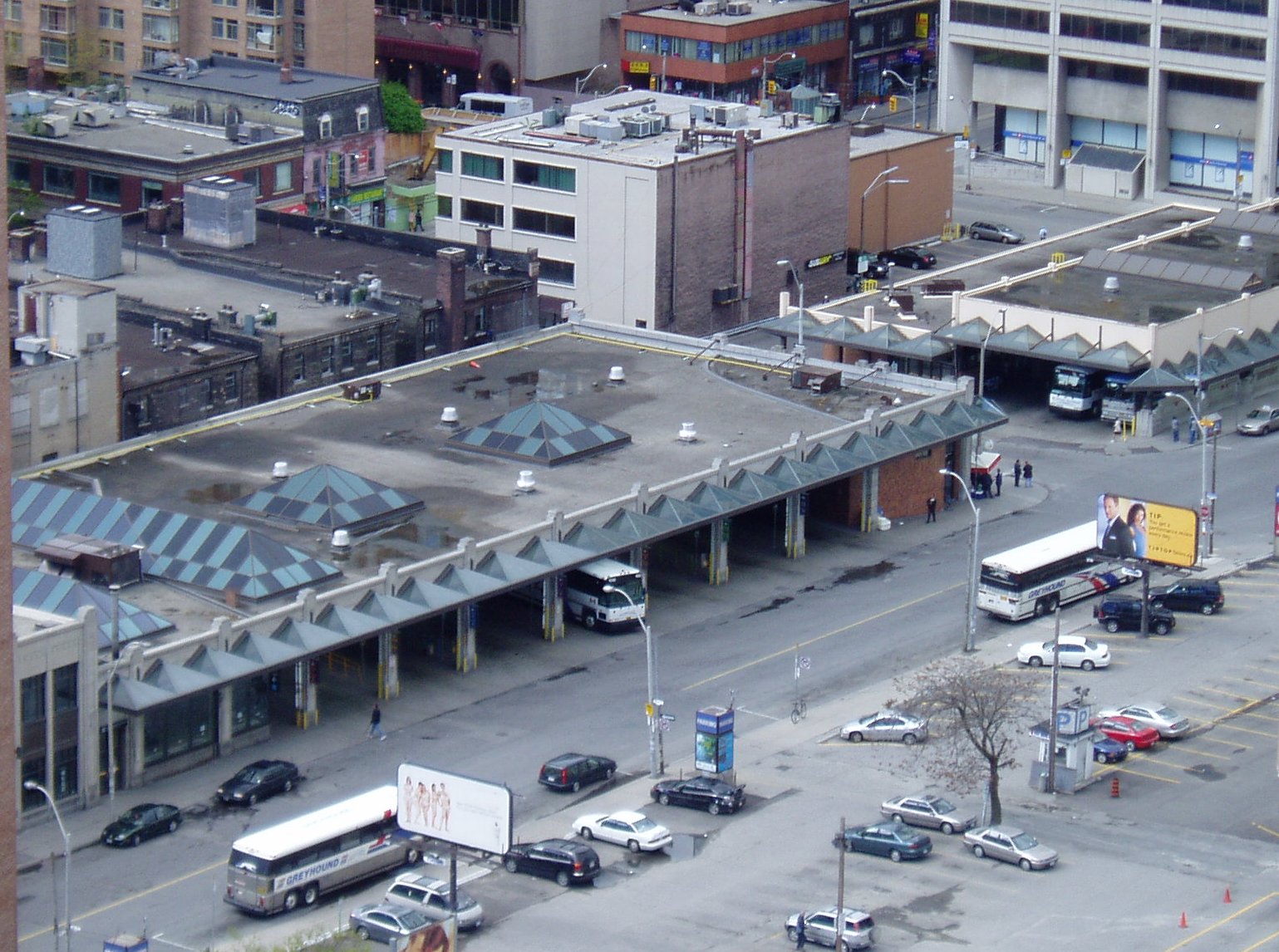