Maryul of Ngari (''Mar-yul'' of ''mNgah-ris'', meaning the "lowland of Ngari"), or the Kingdom of Ladakh, was a west Tibetan kingdom based in modern-day Ladakh and Tibet Autonomous Region. The Maryul kingdom was based in Shey and evolved into the modern Ladakh. The kingdom was founded by Lhachen Palgyigon in and stretched from the Zoji La at the border of Kashmir to Demchok in the southeast, and included Rutog and other areas presently in Tibet. The kingdom came under the control of the Namgyal dynasty in 1460, eventually acquiring the name "Ladakh", and lasted until 1842. In that year, the Dogra general Zorawar Singh, having conquered it, made it part of the would-be princely state of Jammu and Kashmir.

Although the Tibetan meaning of ''Mar-yul'' as lowland is clear, there is evidence of the name being in use even before Ladakh was Tibetanised. For instance, the Chinese Buddhist pilgrim Xuanzang referred to it as ''Mo-lo-so'', which would lead to a reconstructed name such as ''*Malasa'', ''*Marāsa'', or ''*Mrāsa''. The ''Annals'' of Tun‐Huang state that the Tibetan government carried out a census of Zan-zun and ''Mar(d)'' in 719 CE. The Persian text ''Hudud al-Alam'' () refers to a "wealthy country of Tibet", with a tribe named ''Mayul''. These facts suggest that ''Mar-yul'' ("land of ''Mar''") might have been a proper name of the country, but it was interpreted as "lowland" (of Ngari) by the 10th century. The name Maryul was in use in the 16th century when Mirza Haidar Dughlat referred to it and named a region called "Ladaks" that was apparently distinct from Maryul. The name was also used by the Portuguese Jesuit missionary Francisco de Azevedo when he visited Ladakh in 1631, but his usage of the name has been described as Luciano Petech as referring to neither the Kingdom of Ladakh nor Rutog. The Tibetan and Ladakhi name ''La-dwags'' (historically transliterated as ''La-dvags'') means "land of high passes". ''Ladak'' is its pronunciation in several Tibetan districts, and ''Ladakh'' is a transliteration of the Persian spelling. 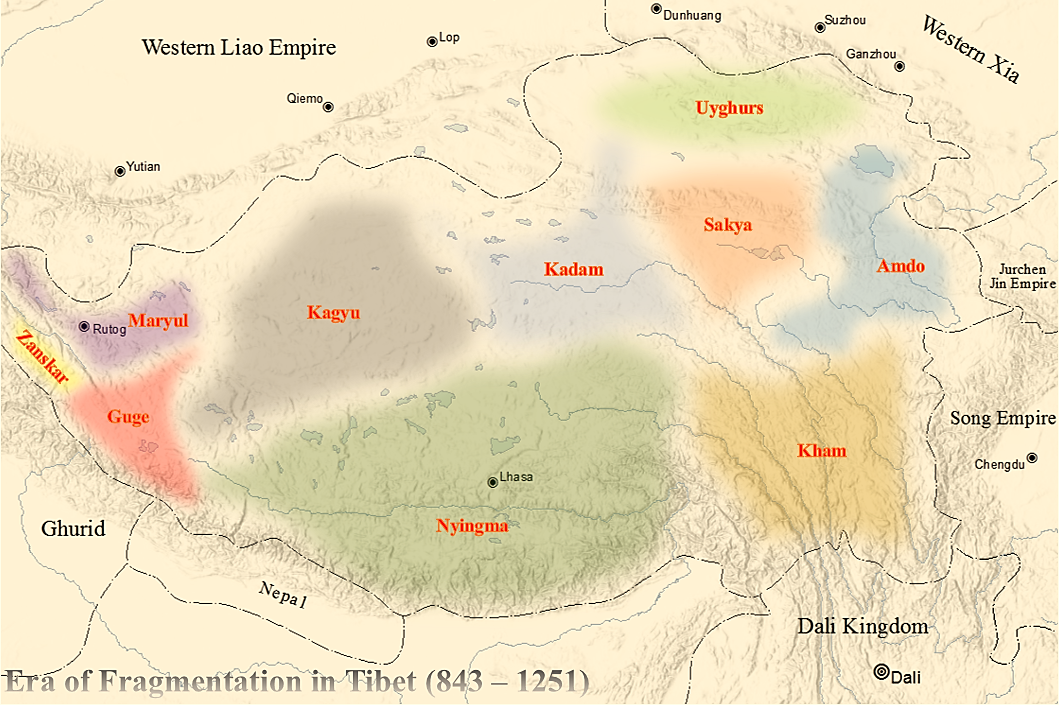 According to the ''Ladakh Chronicles'', Kyide Nyimagon (), a descendant of a branch of the Old Tibetan dynasty of the Tibetan Empire, was forced to flee to the West Tibet during the Tibetan Era of Fragmentation. He married a princess of Purang and obtained the alliance of local chieftains. He expanded his kingdom to stretch from the Mayum La in the east to the Zoji La in the west. Upon his death, his vast kingdom was divided among his three sons: the eldest son, Lhachen Palgyigon, receiving Maryul, the second son, Trashigon, receiving Guge and Purang, and the third son, Detsukgon, receiving Zanskar (mountainous area between Ladakh and Kashmir).

The Kingdom of Maryul was founded by Lhachen Palgyigon (''dPal-gyi-mgon'') in when he was still a prince. He inherited it after the death of his father Kyide Nyimagon (). Scholar Luciano Petech says that even though Palgyigon's father theoretically bequeathed Maryul to him, the actual conquest of the territories was carried out by Palgyigon himself, whom Petech identifies as "the founder and organiser of the Ladakhi kingdom". It appears that the second son Trashigon, who inherited Guge, died without issue. His kingdom was acquired by Detsukgon of Zanskar. The latter's son, Yeshe-Ö became a prominent ruler that reestablished Buddhism in West Tibet and Tibet in general. Maryul, belonging to the senior branch, is believed to have extended some form of suzerainty over the other branches. By 1100 AD, the kingdom of Guge was sufficiently weakened that the king Lhachen Utpala of Maryul brought it under his control. From this time onward, Guge was generally subsidiary to Maryul. After a period of Kashmiri invasions in the mid-15th century, the last king of the west Tibetan dynasty, Blo-gros-mc-og-Idan, reigned from to . During his reign, Blo-gros-mc-og-Idan sent presents to the 1st Dalai Lama, patronized the Gelug scholar gSan-p'u-ba Lha dban-blo-gros, and raided the Kingdom of Guge. The final years of his reign were disastrous, and he was eventually deposed in 1460, ending his dynasty.

thumb|right|300px|Maryul in the 11-12th centuries, ''Historical and Commercial Atlas of China'' The kingdom of Maryul is described in the ''Ladakh Chronicles'' to consist of: * ''Mar-yul'' of ''mNah-ris'' (Leh district), the inhabitants using the black bows; ''Ru-thogs'' (Rutog) of the east and the gold mine of ''hGog'' (possibly Thok Jalung); nearer this way ''lDe-mchog-dkar-po'' (Demchok Karpo); * at the frontier: ** ''Ra-ba-dmar-po'' (possibly Rabma, halfway between Rudok and Spanggur); ** ''Wam-le'' (Hanle), to the top of the pass of the ''Yi-mig'' rock (Imis Pass); ** to the west to the foot of the Kashmir pass (Zoji La), from the cavernous stone upward hither, ** to the north to the gold mine of ''hGog''; ** all the places belonging to ''rGya'' (Gya, on the frontier between Leh and Rupshu). The description makes clear that Purig (the Suru River basin near Kargil) was included in Maryul, but Zanskar to the west was not. The latter went to the third son Detsukgon along with Lahul and Spiti. The Rupshu highland was regarded as the frontier between Maryul and Zanskar. Baltistan to the north was also not included in Maryul. The southern border of Maryul towards Guge is much harder to discern. Demchok is mentioned as a region within Maryul, but not placed on its frontier. If we run a line due east from the Imis Pass (), it would include Tashigang (Zhaxigang), Gar (Shiquanhe) and much of the Sengge Zangbo river basin within Maryul. A. H. Francke includes in his book a sample map, where this kind of a border is shown, running slightly to the north of Gartok. In his view, the second heir Trashigon received "a long and narrow strip of country along the northern slope of the Himalayas, of which Purang and Guge are the best-known provinces". Maryul encompassed all the areas to the north of this narrow strip.

In 1460, the Namgyal dynasty was established. According to the ''Ladakh Chronicles'', the warlike Lhachen Bhagan formed an alliance with the people of Leh and dethroned the Maryul king Blo-gros-mc-og-ldan and his brothers drun-pa A-li and Slab-bstan-dar-rgyas. Sengge Namgyal (r. 1616-1642), nicknamed the "Lion" King, made efforts to restore Ladakh to its old glory by an ambitious and energetic building program including the Leh Palace and the rebuilding of several gompas, the most famous of which are Hemis and Hanle.

Guge was annexed by Ladakh in the second quarter of the 17th century. This invited retaliation from Lhasa, whose forces drove out the Ladakhis and laid siege to Ladakh itself. Ladakh was forced to seek help from the Mughal Empire in Kashmir, leading to the Tibet–Ladakh–Mughal War. At the end of the conflict, in 1684, the Treaty of Tingmosgang was agreed, affirming that: Despite the apparent invocation of the "boundaries fixed in the beginning", the extensive dominions granted in the original inheritance were not retained by Maryul. The treaty itself makes clear that Rutog was no more a part of Maryul and various restrictions were placed on trade with Rutog. Scholar Gerhard Emmer states that Ladakh was reduced to approximately its current extent. It was henceforth treated as being outside Ngari Khorsum, as a buffer state against Mughal India. The territories of Guge, Purang and Rudok were annexed to Tibet and the frontier with Tibet was fixed at the Lha-ri stream near Demchok. The reason for this exclusion was apparently Ladakh's syncretism and its willingness to ally with Mughal India. Ladakh was instructed in the treaty:

The Namgyal dynasty ended in 1842 after a surprise invasion of Ladakh from the Dogra dynasty of Jammu and Kashmir.

A historical claim was again made in the 19th century, after the Dogra general Zorawar Singh conquered Ladakh. Singh claimed all of western Tibet up to the Mayum Pass as Ladakhi territory and occupied it. Once again, Lhasa dispatched troops that defeated Zorawar Singh and laid siege to Leh. After the Dogras received reinforcements, a stalemate was obtained and the Treaty of Chushul reconfirmed the "old, established frontiers".