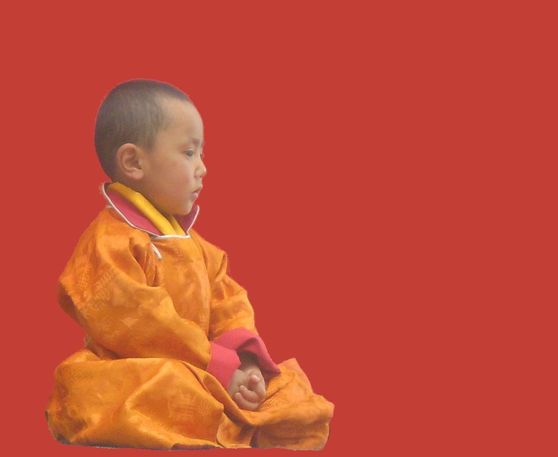 Kushok Bakula Rinpoche () is nowadays the head of Pethup Gompa in Spituk, Ladakh, India. According to his followers he is an emanation of the Buddha Amitabha and was one of the 16 disciples of Buddha (Naytan Chudrug, or the Sixteen Arhats). They also claim that his first 19 incarnations have been documented in the Tibetan text ''Naytan Chagchot'' ().

There are two different explanations for his name. According to Tibetan chronicles, he was fond of doing meditation and praying and was very simple. After renouncing all worldly comforts he used ''pakula'' grass in his everyday life, especially as a sitting and sleeping mat. The Manorathapurani and the Pali version of Milindapanha maintain him as being born at Kaushambi in a minister's family and then having been swallowed by a fish in the Yamuna river that was later caught by an angler. The angler sold it to another minister's wife, Upon cutting pen, the child was found unharmed and alive. The minister's wife adopted him. However, a dispute with his natural parents, about who should take care of him was resolved by the king, who judged that both should have custody of him. Thus, he became known as ''Dva Kula'' (Two Families).

* 2nd: the second incarnation of Bakula was an Indian Mahasiddha Tilopa (), or Sherab Zangpo () (Prajnabhadra). In order to spread the Buddha dharma. The king of Visnunagar offered Tilopa, a learned guru, 500 gold coins a day, if he would live at his court. Tilopa, however, wanted rather to live as a yogi and he quietly departed from the court and retreated near a cemetery to meditate. During that time, Naropa came to serve him. And through the practice of the six famous yoga lams (paths) he attained the mahamudra siddhi. After preaching extensively, he entered the heavenly abode of Amitābha during his lifetime. * 3rd: manifested as the Indian Mahasiddha Luipa (). He abandoned his kingdom in Sri Lanka and journeyed to Ramesvaram, where he became a Bhikkhu. A Dakini at Dorje Dan () (Bodh Gaya) revealed to him an upaya for realising Buddhahood -- and in this way he continued practising for many years in a cemetery. Dakinis at Pataliputra further instructed him to remove his royal pride about the purity of foods, after which he sat in meditation for twelve years near river Ganges, where he lived on the minute guts of fish rejected by the fishermen. * 4th: a king who appears in the religious book 'Kadam Buchos'. * 5th: Aryasura (Lopon Pawo, ), the disciple of Nagarjuna (Gonbo Ludup, ). * 6th: Gyalwa Chogyangs, (), one of Lopon Padma's twenty-five disciples. * 7th: Ratna Udam (Nyamet Rinchen Chondus, ), the disciple of Kasdup Kyungpo, (). * 8th: Yeshe Dzin, dharmaguru of King Gedun Bang. * 9th: Lotsawa Rinchen Sangpo, 954 - 1055. * 10th: Geshe Chagpa Thrichog of the Kadmapa tradition. * 11th: Rechung Dorje Drakpa, 1083/4 – 1161 * 12th: Sthavira Lodros Choskyong