Gulfport is the second-largest city in Mississippi after the state capital, Jackson. Along with Biloxi, Gulfport is the other county seat of Harrison County and the larger of the two principal cities of the Gulfport-Biloxi, Mississippi Metropolitan Statistical Area, which is included in the Gulfport-Biloxi-Pascagoula, Mississippi Combined Statistical Area. As of the 2010 census, the city of Gulfport had a total population of 67,793, with nearly 400,000 in the metro area as of 2018. It is also home to the US Navy Atlantic Fleet Seabees.

thumb|left|U.S. President 1976_reelection_campaign_.html" style="text-decoration: none;"class="mw-redirect" title="1976 United States presidential election">1976 reelection campaign ">1976 United States presidential election">1976 reelection campaign This area was occupied by indigenous cultures for thousands of years, culminating in the historic Choctaw encountered by European explorers. Along the Gulf Coast, French colonists founded nearby Biloxi, and Mobile in the 18th century, well before the area was acquired from France by the United States in 1803 in the Louisiana Purchase. By the Indian Removal Act of 1830, the United States completed treaties to extinguish Choctaw and other tribal land claims and removed them to Indian Territory, now Oklahoma. In that period, the other four of the Five Civilized Tribes in the Southeast were also removed, to make way for white settlers to take over the lands and develop them for agriculture, especially cotton.

An early settlement near this location, known as Mississippi City, appeared on a map of Mississippi from 1855. Mississippi City was the county seat of Harrison County from 1841 to 1902, but is now a suburb in east Gulfport. Gulfport was incorporated on July 28, 1898. The city was founded by William H. Hardy, who was president of the Gulf and Ship Island Railroad (G&SIRR) that connected inland lumber mills to the coast. He was joined by Joseph T. Jones, who later took over the G&SIRR, dredged the harbor in Gulfport, and opened the shipping channel to the sea. In 1902, the harbor was completed and the Port of Gulfport became a working seaport. On April 28, 1904 the Treasury Department changed the port of entry for the district of the Pearl River from Shieldsboro to Gulfport. It now accounts for millions of dollars in annual sales and tax revenue for the state of Mississippi. In 1910, the U.S. Post Office and Customhouse was built here. This Gulfport Post office was listed on the National Register of Historic Places in 1984. In March 1916, Mayor George M. Foote announced that the Andrew Carnegie foundation was going to aid in construction of a Carnegie Library in Gulfport. The city had agreed to providing matching funds for the construction as well as committing to provide operating funds. In the 20th century, the city developed as an important port; as it was served by railroads from the interior, it stimulated town growth by providing a way to get products to markets. The city's location on the coast made it vulnerable to hurricanes and it weathered several. But on August 17, 1969, Gulfport and the Mississippi Gulf Coast were hit by Hurricane Camille. Measured by central pressure, Camille was the second-strongest hurricane to make U.S. landfall in recorded history. The area of total destruction in Harrison County was 68 square miles (180 km2).1The total estimated cost of damage was $1.42 billion (1969 USD, $9 billion 2012 USD).2Camille was the second-most expensive hurricane in the United States, up to that point (behind Hurricane Betsy).3The storm directly killed 143 people in Alabama, Mississippi, and Louisiana. In December 1993, the City annexed north of Gulfport, making it the second-largest city in Mississippi. 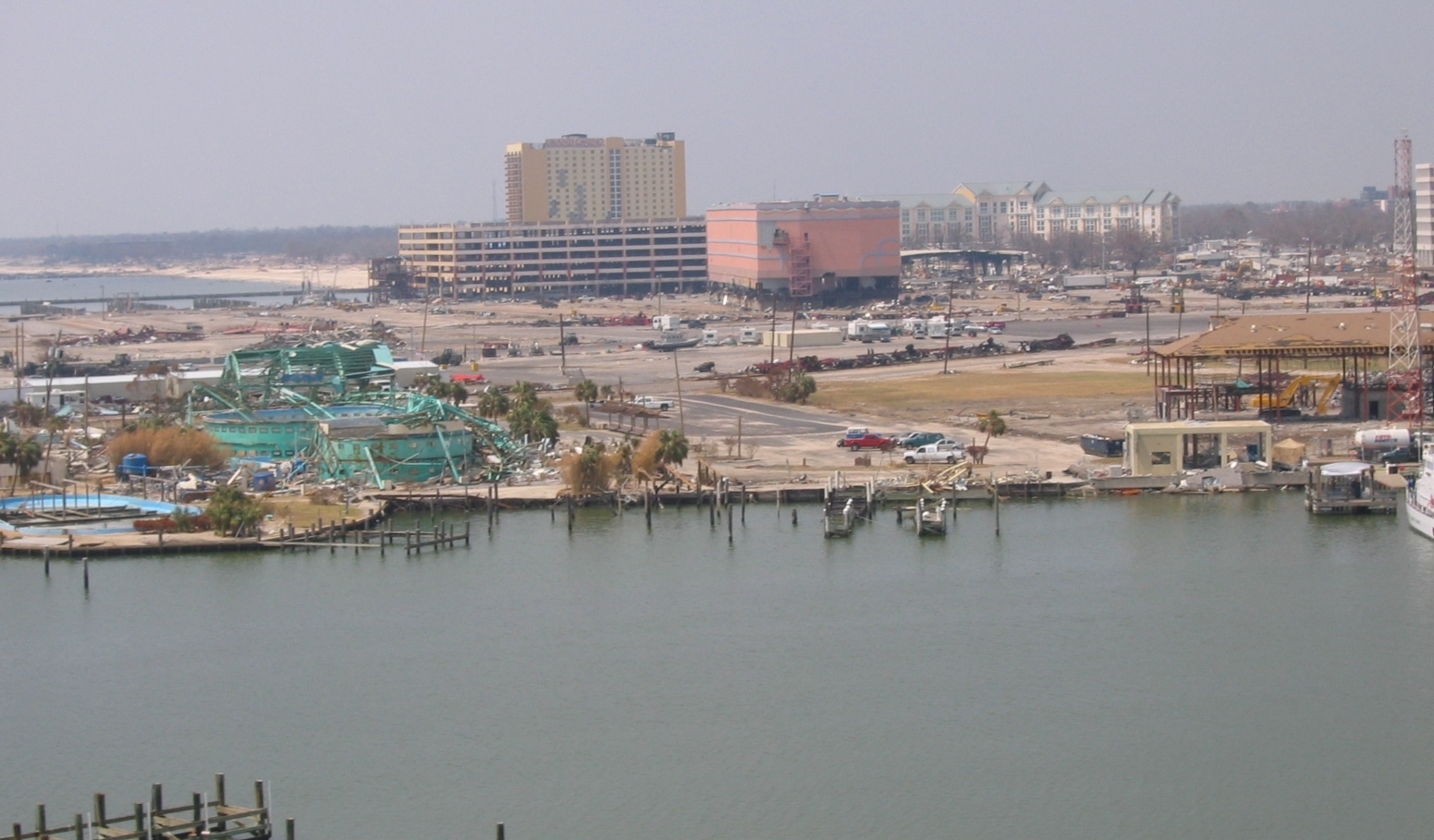 On August 29, 2005, Gulfport was hit by the strong eastern side of Hurricane Katrina. Much of the city was flooded or destroyed in one day by the strong, hurricane-force winds, which lasted more than 16 hours, and a storm surge exceeding 28 feet (9 m) in some sections. Hurricane Katrina damaged more than 40 Mississippi libraries, gutting the Gulfport Public Library, first floor, and breaking windows on the second floor, beyond repair. It required total reconstruction. Although Katrina's damage was far more widespread, it was not the fiercest hurricane to hit Gulfport. Katrina, a Category 3 storm at landfall, was dwarfed by Hurricane Camille, a Category 5 storm, which had hit Gulfport and neighboring communities on August 17, 1969 with 175 mph sustained winds compared to Katrina's 120 mph sustained winds. ''The Sun Herald'' newspaper in Biloxi-Gulfport, under the executive editor Stanley R. Tiner, won the 2006 Pulitzer Prize in journalism for its Katrina coverage. The local ABC television affiliate, WLOX, won the Peabody Award for its Hurricane Katrina coverage.

center|thumb|400px| Gulfport, Mississippi (map center) is east of Long Beach, west of Biloxi, along the Gulf of Mexico. According to the United States Census Bureau, the city had a total area of , of which is land and (11.40%) is water. Gulfport Formation, here named in Harrison Co., southeastern MS, described as barrier ridge composed of white, medium- to fine-grained sand, yellow-orange near surface. Thickness ranges form 5.0 to 9.5 m. Overlies Biloxi Formation. Age is late Pleistocene. Gulfport Formation is limited to a 1- to 3-km-wide discontinuous barrier ridge belt that borders the Gulf mainland shore. Commonly overlies Prairie Formation (alluvium) landward and Biloxi Formation (shelf deposits) near shore. Grades upward from poorly to moderately sorted shoreface sands to foreshore sand and dunes. Fig. 1 shows unit extending from Gulfport, MS, eastward to the mouth of the Ochlockonee River, Franklin Co., FL. Deposited during the Sangamonian.

Gulfport has a humid subtropical climate, which is strongly moderated by the Gulf of Mexico. Winters are short and generally mild; cold spells do occur, but seldom last long. Snow flurries are rare in the city, with no notable accumulation occurring most years. Summers are generally long, hot and humid, though the city's proximity to the Gulf prevents extreme summer highs, as seen farther inland. Gulfport is subject to extreme weather, most notably tropical storm activity through the Gulf of Mexico.

According to Gulfport's 2014 Comprehensive Annual Financial Report, the top employers in the city were:

From its beginnings as a lumber port, Gulfport evolved into a diversified city. With about 6.7 miles (10.7 kilometres) of white sand beaches along the Gulf of Mexico, Gulfport has become a tourism destination, due in large part to Mississippi's coast casinos. Gulfport has served as host to popular cultural events such as the "World's Largest Fishing Rodeo," "Cruisin' the Coast" (a week of classic cars), “Black Spring Break” and "Smokin' the Sound" (speedboat races). Gulfport is a thriving residential community with a strong mercantile center. There are historic neighborhoods and home sites, as well as diverse shopping opportunities and several motels scattered throughout to accommodate golfing, gambling, and water-sport tourism. Gulfport is also home to the Island View Casino, one of twelve casinos on the Mississippi Gulf Coast. 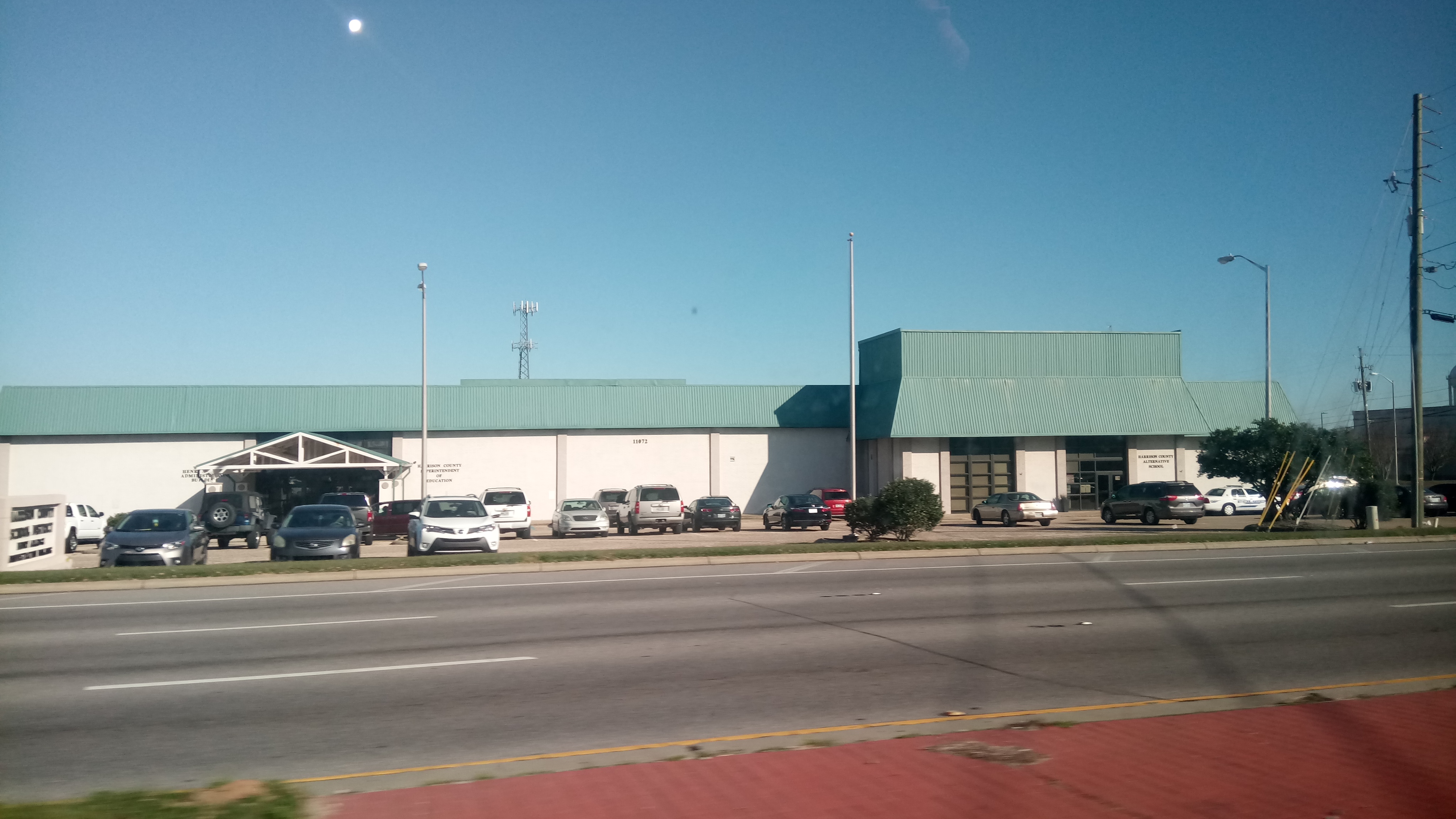 The City of Gulfport is served by the Gulfport School District and the Harrison County School District. The Harrison County Campus of Mississippi Gulf Coast Community College is also located in Gulfport. Before Hurricane Katrina, William Carey University had a satellite campus in Gulfport. In 2009, the university moved to its new Tradition Campus, constructed off Mississippi Highway 67 in north Harrison County. The Gulf Park Campus of the University of Southern Mississippi is located in Long Beach, just west of Gulfport. In 2012, repairs and renovations to campus buildings were still in progress following extensive damage in 2005 by Hurricane Katrina.

Gulfport/Biloxi and the Gulf Coast area is served by the Gulfport-Biloxi International Airport.

The Gulfport Police Department has 160 sworn personnel and 80 civilian staff.

The U.S. Coast Guard operates 9 boats out of the port of Gulfport 4 of which are Patrol Boats. The Gulfport station has 110 members which include Active, Reserve and Coast Guard Auxiliary who respond to an average of 300 search and rescue cases annually.

The Gulfport Fire Department was founded in 1908 and currently provides fire suppression, HAZMAT response, and technical rescue services within the city limits of Gulfport, Mississippi . The GFD operates out of 11 active stations and is staffed by professional firefighters. The GFD works in conjunction with American Medical Response for EMS related emergencies.