Click Here for Items Related To - Block and tackle

A block and tackle or only tackle is a system of two or more pulleys with a rope or cable threaded between them, usually used to lift heavy loads. The pulleys are assembled to form blocks and then blocks are paired so that one is fixed and one moves with the load. The rope is threaded through the pulleys to provide mechanical advantage that amplifies the force applied to the rope. Hero of Alexandria described cranes formed from assemblies of pulleys in the first century. Illustrated versions of Hero's ''Mechanica'' (a book on raising heavy weights) show early block and tackle systems.

A block is a set of pulleys or sheaves mounted on a single frame. An assembly of blocks with a rope threaded through the pulleys is called tackle. The process of threading ropes through blocks is called "reeving", and a threaded block and tackle is said to have been "rove". A block and tackle system amplifies the tension force in the rope to lift heavy loads. They are common on boats and sailing ships, where tasks are often performed manually. In the diagram shown here, the number of rope sections of the tackles shown is as follows: * Gun tackle: 2 * Luff tackle: 3 * Double tackle: 4 * Gyn tackle: 5 * Threefold purchase: 6 Note that the gun tackle, double tackle and threefold purchase all have the same number of pulleys in both blocks (one, two and three, respectively) whereas the Luff tackle and Gyn tackle have mis-matched blocks with differing numbers of pulleys. 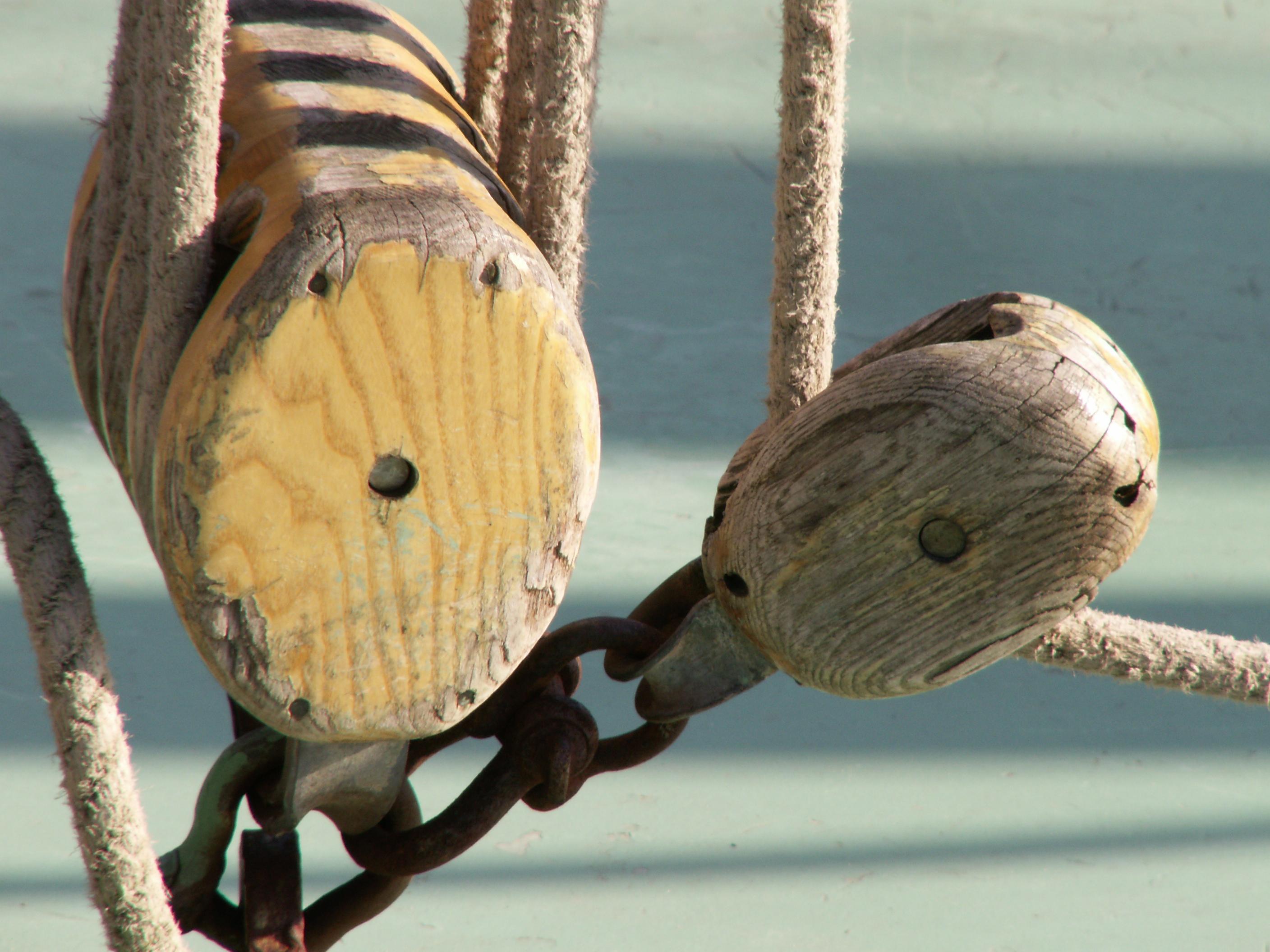 The formula used to find the effort required to raise a given weight using a block and fall: where is the force applied to the hauling part of the line (the input force), is the weight of the load (the output force), is the ideal mechanical advantage of the system (which is the same as the number of segments of line extending from the moving block), and is the mechanical efficiency of the system (equal to one for an ideal frictionless system; a fraction less than one for real-world systems with energy losses due to friction and other causes). If is the number of sheaves in the purchase, and there is a roughly % loss of efficiency at each sheave due to friction, then: This approximation is more accurate for smaller values of and . A more precise estimate of efficiency is possible by use of the sheave friction factor, (which may be obtainable from the manufacturer or published tables). The relevant equation is: Typical values are 1.04 for roller bearing sheaves and 1.09 for plain bearing sheaves (with wire rope). The increased force produced by a tackle is offset by both the increased length of rope needed and the friction in the system. In order to raise a block and tackle with a mechanical advantage of 6 a distance of 1 metre, it is necessary to pull 6 metres of rope through the blocks. Frictional losses also mean there is a practical point at which the benefit of adding a further sheave is offset by the incremental increase in friction which would require additional force to be applied in order to lift the load. Too much friction may result in the tackle not allowing the load to be released easily, or by the reduction in force needed to move the load being judged insufficient because undue friction has to be overcome as well.

When installing a block on an existing line, it is often inconvenient at best to thread the rope through the block to be added. *Open blocks have a space wide enough between the fixed cheeks to be able to slide the pulley over the rope. These can be extremely small and light while retaining significant strength due to the lack of moving parts. *A swing cheek block a special kind of block which can be opened to engage with a bight, without the necessity to thread the rope through the block or remove the load from the end of the rope. The snatch block is also the load lifting pulley in certain arrangements, such as during use in a recovery operation.

Swing-Cheek blocks may be roughly divided into two categories: * Swing cheek pulleys: used for light loads or redirection of forces, usually with a single pulley wheel (though multiple sheaves/cheeks are not uncommon) and an attachment point (or several) for a carabiner or sling. The cheeks are not fixed or locked in position aside from the device used to secure them to the load or rigging point. Examples of use (in an arborocultural setting) include: tail minding/tending, and for setting a rigging point in the tree above the cut to take place - a positive rigging situation. *Snatch or Impact Blocks: used for heavier loads and more dynamic rigging, the cheeks of these blocks are fixed in place with a pin which locks into the opposite cheek. This pin may form part of the axle for a second pulley, which is secured to the load or rigging point with a soft sling, rather than a solid device such as a shackle. This allows for more even distribution of forces to the faces where the forces will be applied, as opposed to a carabiner or shackle, where the forces are applied more strongly to corners and edges, increasing risk of deformation or damage. Examples of use (again, in relation to tree care) may include setting a block below the current cut, resulting in a 'negative' rigging situation, in which shock loads can be significant - especially if removing large sections of vertical stem.