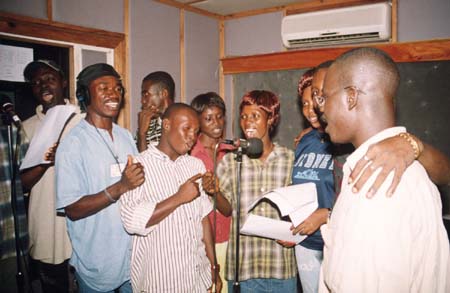 Voice acting is the art of performing voice-overs to represent a character or provide information to an audience. Performers are called voice actors/actresses, voice artists or voice talent. In the UK, voice acting is recognised as a specialized dramatic profession, primarily due to the BBC's long tradition of radio drama production. Examples of voice work include animated, off-stage, off-screen or non-visible characters in various works such as feature films, dubbed foreign-language films, animated films, anime, television shows, video games, cartoons, documentaries, commercials, audiobooks, radio dramas and comedies, amusement rides, theater productions, puppet shows and audio games. Voice actors are also heard through pre-recorded and automated announcements that are a part of everyday modern life in areas such as shops, elevators, waiting rooms and public transport. The role of a voice actor may involve singing, most often when playing a fictional character, although a separate performer is sometimes enlisted as the character's singing voice.

The voices for animated characters are provided by voice actors. For live-action productions, voice acting often involves reading the parts of computer programs, radio dispatchers or other characters who never actually appear on screen. With an audio drama, there is more freedom because there is no need to match a dub to the original actor or animated character. Producers and agencies are often on the lookout for many styles of voices, such as booming voices for more dramatic productions or cute, young-sounding voices for trendier markets. Some voices sound like regular, natural, everyday people; all of these voices have their place in the voiceover world, provided they are used correctly and in the right context.

In the context of voice acting, narration is the use of spoken commentary to convey a story to an audience. A narrator is a personal character or a non-personal voice that the creator of the story develops to deliver information about the plot to the audience. The voice actor who plays the narrator is responsible for performing the scripted lines assigned to them. In traditional literary narratives (such as novels, short stories, and memoirs) narration is a required story element; in other types of (chiefly non-literary) narratives (such as plays, television shows, video games, and films) narration is optional.

One of the most common uses for voice acting is within commercial advertising. The voice actor is hired to voice a message associated with the advertisement. This has different sub-genres such as television, radio, film, and online advertising. The sub-genres are all different styles in their own right. For example, television commercials tend to be voiced with a narrow, flat inflection pattern (or prosody pattern) whereas radio commercials, especially local ones, tend to be voiced with a very wide inflection pattern in an almost over-the-top style. Marketers and advertisers use voice-overs in radio, TV, online adverts, and more; total advertising spend in the UK was forecast to be £21.8 billion in 2017. Voice-over used in commercial adverts is also the only area of voice acting where "de-breathing" is used. This means artificially removing breaths from the recorded voice, and is done to stop the audience being distracted in any way from the commercial message that is being put across.

Automated dialogue replacement (ADR) is the process of re-recording dialogue by the original actor after the filming process to improve audio quality or reflect dialogue changes, also known as "looping" or a "looping session". ADR is also used to change original lines recorded on set to clarify context, improve diction or timing, or to replace an accented vocal performance. In the UK, it is also called "post-synchronization" or "post-sync".

Voice artists are also used to record the individual sample fragments played back by a computer in an automated announcement. At its simplest, each recording consists of a short phrase which is played back when necessary, such as the "mind the gap" announcement introduced on the London Underground in 1969, which is currently voiced by Emma Clarke. In a more complicated system, such as a speaking clock, the announcement is re-assembled from fragments such as "minutes past", "eighteen", and "p.m." For example, the word "twelve" can be used for both "Twelve O'Clock" and "Six Twelve". Automated announcements can also include on-hold messages on phone systems and location-specific announcements in tourist attractions.

Software to modify and generate human voices has become popular in the 21st century. AI startup Dessa created a computer-generated Joe Rogan's voice using thousands of hours of his podcast audio, while Ubisoft used speech synthesis to give thousands of characters distinguished voices in the video game ''Watch Dogs: Legion'', and Google announced in 2020 their solution to generate human-like speech from text.

From 1988 to 1994, the UK banned broadcasting of the voices of people linked to violence in Northern Ireland. Television circumvented this by using actors' voices synchronized to footage of the prohibited people speaking.

occupations include performing roles in anime, audio dramas, and video games; performing voice-overs for dubs of non-Japanese movies; and providing narration to documentaries and similar programs. Japan has approximately 130 voice acting schools and troupes of voice actors who usually work for a specific broadcast company or talent agency. They often attract their own appreciators and fans, who watch shows specifically to hear their favorite performer. Many Japanese voice actors frequently branch into music, often singing the opening or closing themes of shows in which they star, or become involved in non-animated side projects such as audio dramas (involving the same characters in new storylines) or image songs (songs sung in character that are not included in the anime but which further develop the character).

Although voice acting is criticized in Brazil, most of the films in the theaters are dubbed in Portuguese, and most Brazilians tend to prefer watching movies in their native language. Many voice actors are also dubbing directors and translators. To become a voice actor in Brazil, one needs to be a professional actor and attend dubbing courses. Some celebrities in Brazil have also done voice acting.

Actors often lend their voices to characters in games and some have made a career of it across many of the main game-manufacturing countries, mostly the United States, Canada, the United Kingdom, and Japan. Their names have sometimes been linked to a particular character they have voiced. Notable video game voice actors include Maaya Sakamoto (the Japanese version of Lightning in ''Final Fantasy XIII''), Tatsuhisa Suzuki (Noctis Lucis Caelum in ''Final Fantasy XV''), Miyu Irino (the Japanese version of Sora in the ''Kingdom Hearts'' series), David Hayter (Solid Snake and Big Boss in the ''Metal Gear'' series), Steve Downes and Jen Taylor (Master Chief and Cortana in the ''Halo'' series), Nolan North (Nathan Drake in the ''Uncharted'' series and Desmond Miles in the ''Assassin's Creed'' series), Troy Baker (Joel in ''The Last of Us'' series) and Charles Martinet (Mario, Luigi, Wario, and Waluigi in Nintendo's ''Mario'' franchise). Other actors more linked with film or television acting have also voiced video game characters, such as Ray Liotta (Tommy Vercetti in ''Grand Theft Auto: Vice City'' and Billy Handsome in ''Call of Duty: Black Ops II''), Michael Dorn (various characters in ''World of Warcraft'' and Gatatog Uvenk in ''Mass Effect 2''), Kaili Vernoff (Miranda Cowan in ''Grand Theft Auto V'' and Susan Grimshaw in ''Red Dead Redemption 2''), Ashley Johnson (Ellie in ''The Last of Us'' series), Kristen Bell (Lucy Stillman in the first three mainline entries in the ''Assassin's Creed'' franchise) and Kelsey Grammer (Sideshow Bob in ''The Simpsons Game'').