Transmission electron microscopy (TEM) is a microscopy technique in which a beam of electrons is transmitted through a specimen to form an image. The specimen is most often an ultrathin section less than 100 nm thick or a suspension on a grid. An image is formed from the interaction of the electrons with the sample as the beam is transmitted through the specimen. The image is then magnified and focused onto an imaging device, such as a fluorescent screen, a layer of photographic film, or a sensor such as a scintillator attached to a charge-coupled device. Transmission electron microscopes are capable of imaging at a significantly higher resolution than light microscopes, owing to the smaller de Broglie wavelength of electrons. This enables the instrument to capture fine detail—even as small as a single column of atoms, which is thousands of times smaller than a resolvable object seen in a light microscope. Transmission electron microscopy is a major analytical method in the physical, chemical and biological sciences. TEMs find application in cancer research, virology, and materials science as well as pollution, nanotechnology and semiconductor research, but also in other fields such as paleontology and palynology. TEM instruments boast an enormous array of operating modes including conventional imaging, scanning TEM imaging (STEM), diffraction, spectroscopy, and combinations of these. Even within conventional imaging, there are many fundamentally different ways that contrast is produced, called "image contrast mechanisms." Contrast can arise from position-to-position differences in the thickness or density ("mass-thickness contrast"), atomic number ("Z contrast," referring to the common abbreviation Z for atomic number), crystal structure or orientation ("crystallographic contrast" or "diffraction contrast"), the slight quantum-mechanical phase shifts that individual atoms produce in electrons that pass through them ("phase contrast"), the energy lost by electrons on passing through the sample ("spectrum imaging") and more. Each mechanism tells the user a different kind of information, depending not only on the contrast mechanism but on how the microscope is used—the settings of lenses, apertures, and detectors. What this means is that a TEM is capable of returning an extraordinary variety of nanometer- and atomic-resolution information, in ideal cases revealing not only where all the atoms are but what kinds of atoms they are and how they are bonded to each other. For this reason TEM is regarded as an essential tool for nanoscience in both biological and materials fields. The first TEM was demonstrated by Max Knoll and Ernst Ruska in 1931, with this group developing the first TEM with resolution greater than that of light in 1933 and the first commercial TEM in 1939. In 1986, Ruska was awarded the Nobel Prize in physics for the development of transmission electron microscopy. 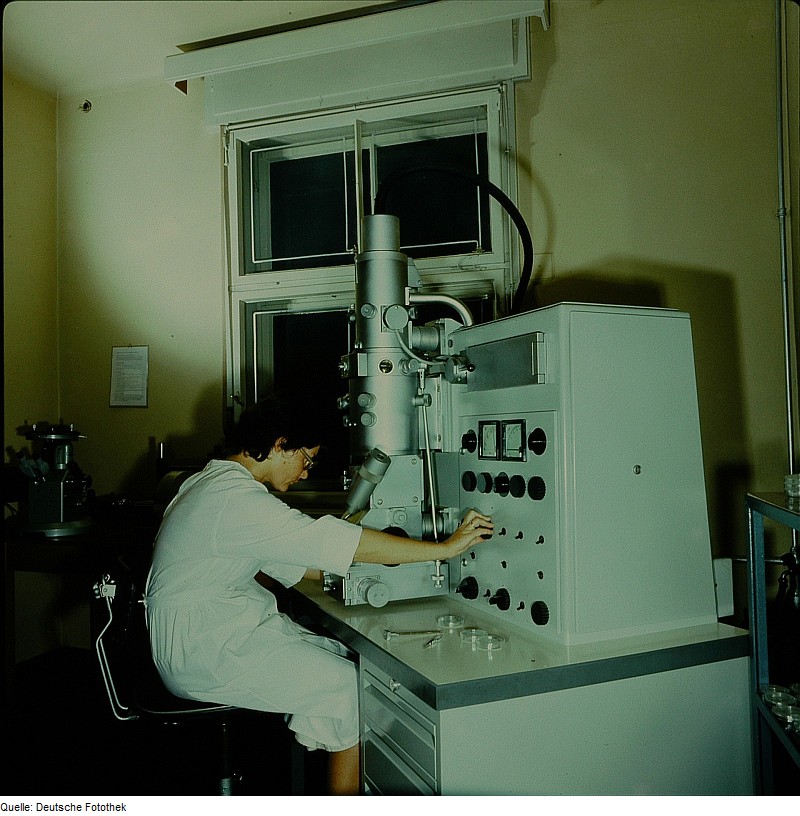 In 1873, Ernst Abbe proposed that the ability to resolve detail in an object was limited approximately by the wavelength of the light used in imaging or a few hundred nanometers for visible light microscopes. Developments in ultraviolet (UV) microscopes, led by Köhler and Rohr, increased resolving power by a factor of two. However this required expensive quartz optics, due to the absorption of UV by glass. It was believed that obtaining an image with sub-micrometer information was not possible due to this wavelength constraint. In 1858, Plücker observed the deflection of "cathode rays" (electrons) by magnetic fields. This effect was used by Ferdinand Braun in 1897 to build simple cathode-ray oscilloscope (CRO) measuring devices. In 1891, Riecke noticed that the cathode rays could be focused by magnetic fields, allowing for simple electromagnetic lens designs. In 1926, Hans Busch published work extending this theory and showed that the lens maker's equation could, with appropriate assumptions, be applied to electrons. In 1928, at the Technical University of Berlin, Adolf Matthias, Professor of High Voltage Technology and Electrical Installations, appointed Max Knoll to lead a team of researchers to advance the CRO design. The team consisted of several PhD students including Ernst Ruska and Bodo von Borries. The research team worked on lens design and CRO column placement, to optimize parameters to construct better CROs, and make electron optical components to generate low magnification (nearly 1:1) images. In 1931, the group successfully generated magnified images of mesh grids placed over the anode aperture. The device used two magnetic lenses to achieve higher magnifications, arguably creating the first electron microscope. In that same year, Reinhold Rudenberg, the scientific director of the Siemens company, patented an electrostatic lens electron microscope.