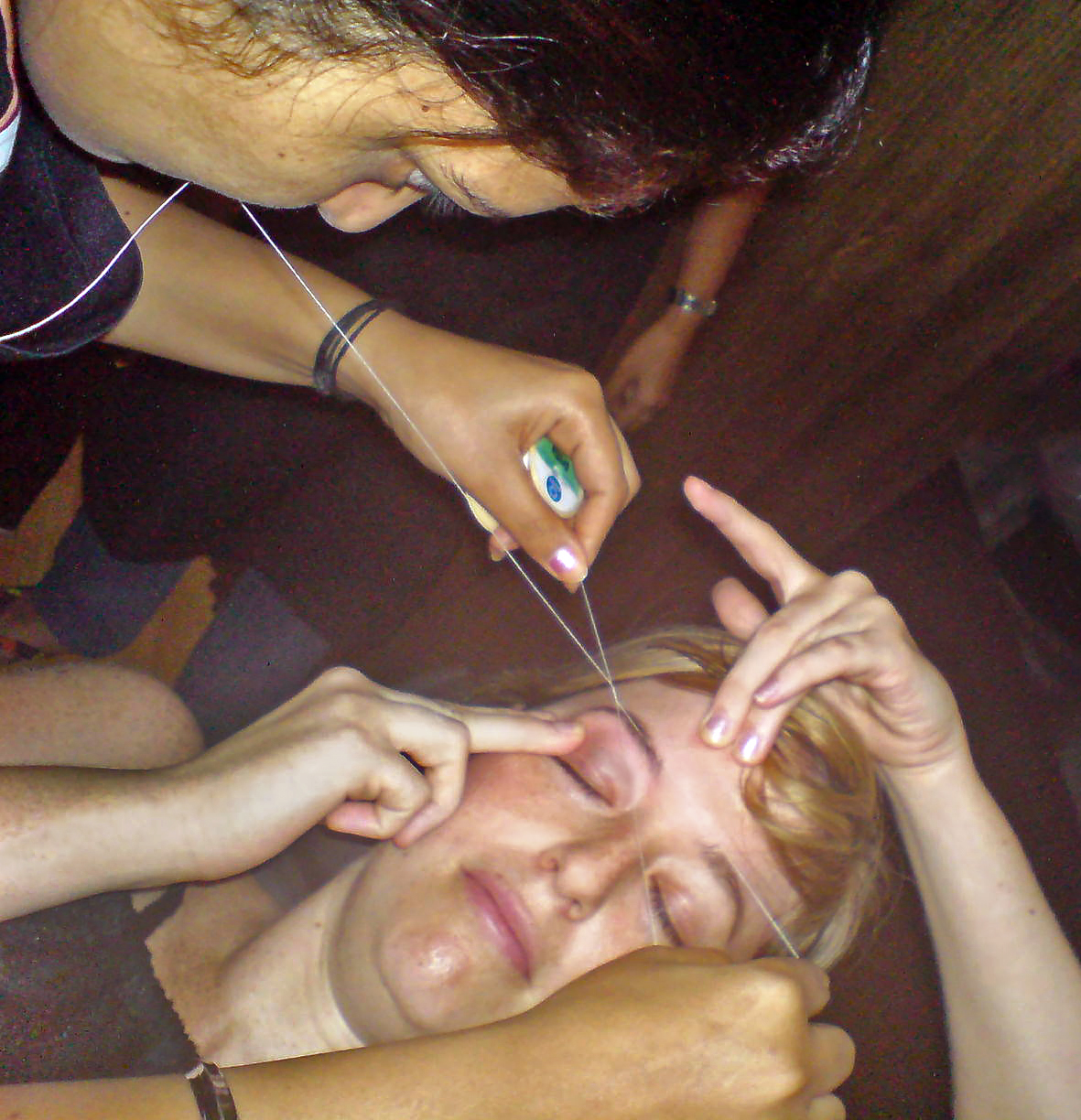 Threading is a method of hair removal for both men and women originating in
Iran Iran, officially the Islamic Republic of Iran, and also called Persia, is a country located in Western Asia. It is bordered by Iraq and Turkey to the west, by Azerbaijan and Armenia to the northwest, by the Caspian Sea and Turkmeni ...
, Indus valley and
India India, officially the Republic of India (Hindi: ), is a country in South Asia. It is the List of countries and dependencies by area, seventh-largest country by area, the List of countries and dependencies by population, second-most populous ...
. It has gained popularity in Western countries, especially with a cosmetic application (particularly for removing/shaping eyebrows).

In threading, a thin cotton or polyester thread is doubled, then twisted. It is then rolled over areas of unwanted hair, plucking the hair at the follicle level. Unlike tweezing, where single hairs are pulled out one at a time, threading can remove short rows of hair. Advantages cited for eyebrow threading, as opposed to eyebrow waxing, include that it provides more precise control in shaping eyebrows, and that it is gentler on the skin. A disadvantage is that it can be painful, as several hairs are removed at once; however, this can be minimized if it is done correctly, i.e. with the right pressure. There are a few different techniques for threading. These include the hand method, mouth method and neck method. Each technique has advantages and disadvantages; however, the mouth holding method is the fastest and most precise. Threading allows for a more defined and precise shape and can create better definition for eyebrows. It is also used as a method of removing unwanted hair on the entire face and upper lip area. Threading is not a good method for removing hair on arms or legs, as the hair in those regions is typically quite coarse and there is too much to remove.

Eyebrow threading is a centuries-old technique that began in the Middle East and South Asia. In some countries, it signified rites of passages such as preparing for marriage. Threading became popular in the United States beginning in the late 1980s, when immigrants from these countries began setting up threading studios in large American cities. It has increased in popularity since then. According to ''
The Guardian ''The Guardian'' is a British daily newspaper. It was founded in 1821 as ''The Manchester Guardian'', and changed its name in 1959. Along with its sister papers ''The Observer'' and ''The Guardian Weekly'', ''The Guardian'' is part of the Gu ...
'', in the
United Kingdom The United Kingdom of Great Britain and Northern Ireland, commonly known as the United Kingdom (UK) or Britain, is a country in Europe, off the north-western coast of the European mainland, continental mainland. It comprises England, Scotlan ...
, online searches for threading services increased by 50% in 2015.