Terrestrial television is a type of television
broadcasting Broadcasting is the distribution of sound, audio or video content to a dispersed audience via any electronic medium (communication), mass communications medium, but typically one using the electromagnetic spectrum (radio waves), in a :wikt:one-t ...
in which the television signal is transmitted by radio waves from the terrestrial (Earth-based) transmitter of a television station to a TV receiver having an antenna. The term ''terrestrial'' is more common in Europe and Latin America, while in the United States it is called ''broadcast'' or over-the-air television (OTA). The term "terrestrial" is used to distinguish this type from the newer technologies of
satellite television Satellite television is a service that delivers television programming to viewers by relaying it from a communications satellite orbiting the Earth directly to the viewer's location. The signals are received via an outdoor parabolic antenna commonl ...
( direct broadcast satellite or DBS television), in which the television signal is transmitted to the receiver from an overhead
satellite In the context of spaceflight, a satellite is an object that has been intentionally placed into orbit. These objects are called artificial satellites to distinguish them from natural satellites such as Earth's Moon. On 4 October 1957 the Sovi ...
; cable television, in which the signal is carried to the receiver through a cable; and Internet Protocol television, in which the signal is received over an
Internet The Internet (Capitalization of Internet, or internet) is the global system of interconnected computer networks that uses the Internet protocol suite (TCP/IP) to communicate between networks and devices. It is a ''network of networks'' t ...

stream or on a network utilizing the Internet Protocol. Terrestrial television stations broadcast on television channels with frequencies between about 52 and 600 MHz in the VHF and UHF bands. Since radio waves in these bands travel by line-of-sight propagation, line of sight, reception is generally limited by the visual horizon to distances of , although under better conditions and with tropospheric ducting, signals can sometimes be received hundreds of kilometers distant. Terrestrial television was the first technology used for television broadcasting. The BBC began broadcasting in 1929 and by 1930 many radio stations had a regular schedule of experimental television programmes. However, these early experimental systems had insufficient picture quality to attract the public, due to their mechanical television, mechanical scan technology, and television did not become widespread until after World War II with the advent of electronic scan television technology. The television broadcasting business followed the model of radio networks, with local television stations in cities and towns affiliated with television networks, either commercial (in the US) or government-controlled (in Europe), which provided content. Television broadcasts were in black and white television, black and white until the transition to color television in the late 1950s, 60s and early 70s. There was no other method of television delivery until the 1950s with the beginnings of cable television and ''community antenna television'' (CATV). CATV was, initially, only a re-broadcast of over-the-air signals. With the widespread adoption of cable across the United States in the 1970s and 1980s, viewing of terrestrial television broadcasts has been in decline; in 2018, it was estimated that about 14% of US households used an antenna. However, in certain other regions terrestrial television continue to be the preferred method of receiving television, and it is estimated by Deloitte as of 2020 that at least 1.6 billion people in the world receive at least some television using these means. The largest market is thought to be Indonesia, where 250 million people watch through terrestrial. By 2019, over-the-top media service (OTT) which is streamed via the internet had become a common alternative. 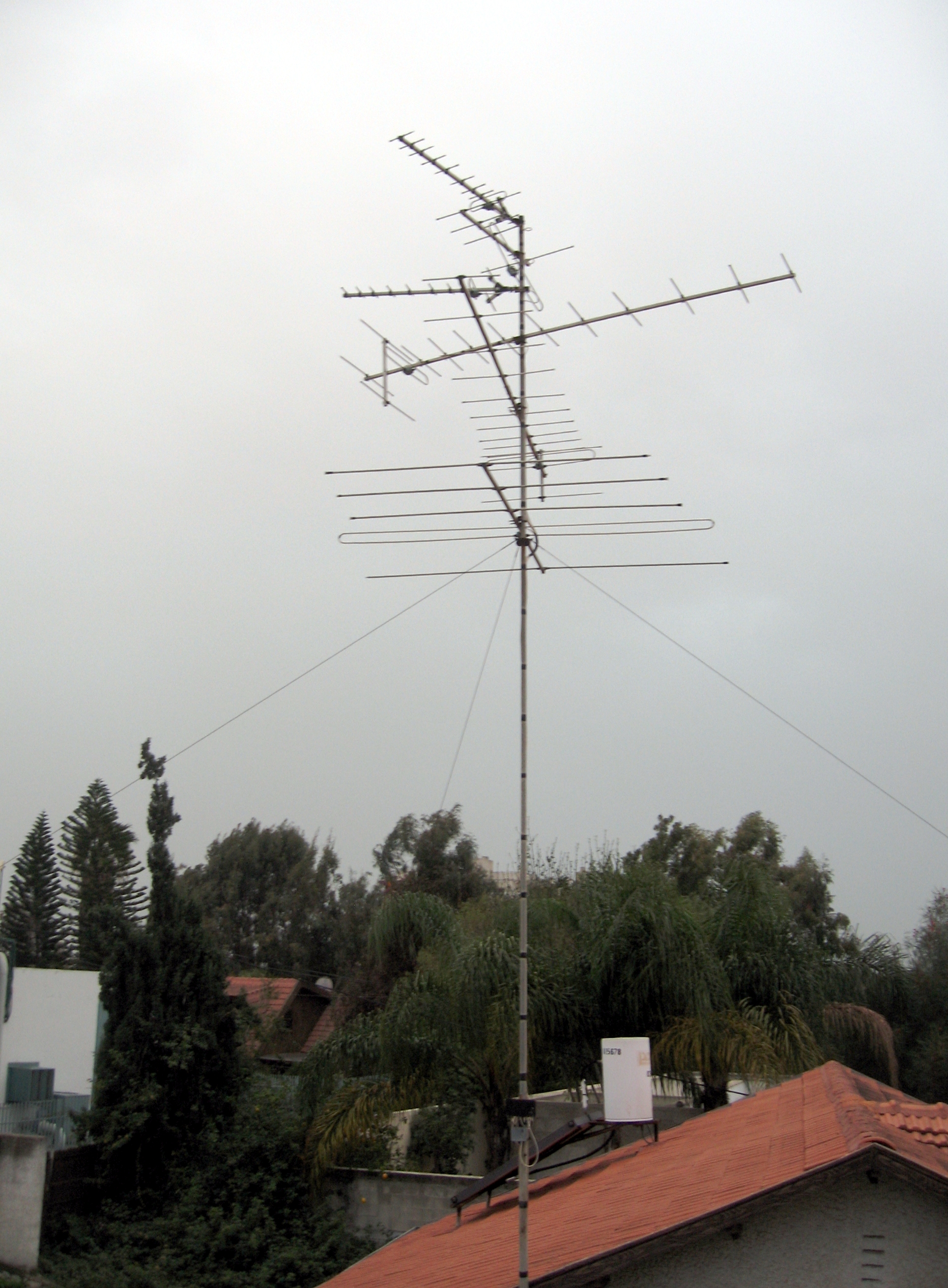 Following the ST61 conference, UHF frequencies were first used in the UK in 1964 with the introduction of BBC Two, BBC2. In the UK, VHF channels were kept on the old 405-line television system, 405-line system, while UHF was used solely for 625-line broadcasts (which later used PAL colour). Television broadcasting in the 405-line system continued after the introduction of four analogue programmes in the UHF bands until the last 405-line transmitters were switched off on January 6, 1985. Very high frequency, VHF Band III was used in other countries around Europe for PAL broadcasts until planned phase-out and switch over to digital television. The success of analogue terrestrial television across Europe varied from country to country. Although each country had rights to a certain number of frequencies by virtue of the ST61 plan, not all of them were brought into service.

In 1941, the first NTSC standard was introduced by the NTSC, National Television System Committee. This standard defined a transmission scheme for a black and white picture with 525 lines of vertical resolution at 60 fields per second. In the early 1950s, this standard was superseded by a backwards-compatible standard for color television. The NTSC standard was exclusively being used in the Americas as well as Japan until the digital television transition, introduction of digital terrestrial television (DTT). While Mexico have ended all its analogue television broadcasts and the US and Canada have shut down nearly all of their analogue TV stations, the NTSC standard continues to be used in the rest of Latin American countries except for Argentina, Paraguay and Uruguay where PAL-N standard is used, while testing their DTT platform. In the late 1990s and early 2000s, the Advanced Television Systems Committee developed the ATSC standards, ATSC standard for digital high definition terrestrial transmission. This standard was eventually adopted by many American countries, including the United States, Canada, Dominican Republic, Mexico, El Salvador, Guatemala and Honduras; however, the three latter countries ditched it in favour of ISDB-Tb. The Pan-American terrestrial television operates on analog channels 2 through 6 (Very high frequency, VHF-low band, 54 to 88 MHz, known as band I in Europe), 7 through 13 (VHF-high band, 174 to 216 MHz, known as band III elsewhere), and 14 through 51 (Ultra high frequency, UHF television band, 470 to 698 MHz, elsewhere band IV, bands IV and band V, V). Unlike with analog transmission, ATSC channel numbers do not correspond to radio frequencies. Instead, a virtual channel is defined as part of the ATSC stream metadata so that a station can transmit on any frequency but still show the same channel number. Additionally, Broadcast relay station, free-to-air television repeaters and signal boosters can be used to rebroadcast a terrestrial television signal using an otherwise unused channel to cover areas with marginal reception. (see Pan-American television frequencies for frequency allocation charts) Analog television channels 2 through 6, 7 through 13, and 14 through 51 are only used for low-power broadcasting, LPTV translator stations in the U.S. Channels 52 through 69 are still used by some existing stations, but these channels must be vacated if telecommunications companies notify the stations to vacate that signal spectrum. By convention, broadcast television signals are transmitted with horizontal polarization.

By the mid-1990s, the interest in digital television across Europe was such the European Conference of Postal and Telecommunications Administrations, CEPT convened the "Chester '97" conference to agree on means by which digital television could be inserted into the ST61 frequency plan. The introduction of digital terrestrial television in the late 1990s and early years of the 21st century led the ITU to call a Regional Radiocommunication Conference to wikt:abrogate, abrogate the ST61 plan and to put a new plan for DTT broadcasting only in its place. In December 2005, the European Union decided to cease all analog recording, analogue audio and analogue video television transmissions by 2012 and switch all terrestrial television broadcasting to digital audio and digital video (all EU countries have agreed on using DVB-T). The Netherlands completed the transition in December 2006, and some EU member states decided to complete their switchover as early as 2008 (Sweden), and (Denmark) in 2009. While the UK began to switch off analog broadcasts, region by region, in late 2007, it was not completed until 24 October 2012. Norway ceased all analog television transmissions on 1 December 2009. Two member states (not specified in the announcement) have expressed concerns that they might not be able to proceed to the switchover by 2012 due to technical limitations; the rest of the EU member states had stopped analog television transmissions by the end 2012. Many countries are developing and evaluating digital terrestrial television systems. Australia has adopted the DVB-T standard and the government's industry regulator, the Australian Communications and Media Authority, has mandated that all analogue transmissions will cease by 2012. Mandated digital conversion started early in 2009 with a graduated program. The first centre to experience analog switch-off will be the remote Victorian regional town of Mildura, in 2010. The government will supply underprivileged houses across the nation with free digital set-top digital television adapter, converter boxes in order to minimise any conversion disruption. Australia's major free-to-air television networks have all been granted digital transmission licences and are each required to broadcast at least one high-definition and one standard-definition channel into all of their markets. In North America, a specification laid out by the Advanced Television Systems Committee, ATSC has become the standard for digital terrestrial television. In the United States, the Federal Communications Commission (FCC) set the final deadline for the switch-off of analogue service for 12 June 2009. All television receivers must now include a ATSC tuner, DTT tuner using ATSC. In Canada, the Canadian Radio-television and Telecommunications Commission (CRTC) set 31 August 2011 as the date that terrestrial analogue transmission service ceased in metropolitan areas and provincial capitals. In Mexico, the Federal Telecommunications Institute (IFT) set the final deadline for the end of analogue terrestrial television for 31 December 2015.

In late 2009, US competition for the limited available radio spectrum led to debate over the possible re-allocation of frequencies currently occupied by television, and the FCC began asking for comments on how to increase the bandwidth (signal processing), bandwidth available for wireless broadband. Some have proposed mixing the two together, on different channels that are already open (like White spaces (radio)#White-spaces devices, White Spaces) while others have proposed "repacking" some stations and forcing them off certain channels, just a few years after the same thing was done (without regulatory taking, compensation to the broadcasters) in the DTV transition in the United States. Some U.S. commentators have proposed the closing down of terrestrial TV broadcasting, on the grounds that available spectrum might be better used, and requiring viewers to shift to satellite or cable reception. This would eliminate mobile TV, which has been delayed several years by the FCC's decision to choose ATSC and its proprietary 8VSB modulation, instead of the worldwide COFDM standard used for all other digital terrestrial broadcasting around the world. Compared to Europe and Asia, this has hamstrung mobile TV in the US, because ATSC cannot be received while in motion (or often even while stationary) without ATSC-M/H as terrestrial DVB-T or ISDB-T can even without DVB-H or 1seg. The National Association of Broadcasters has organized to fight such proposals, and public comments are also being taken by the FCC through mid-December 2009, in preparation for a National Broadband Plan (United States), plan to be released in mid-February 2010.