Irony punctuation is any proposed form of notation used to denote irony or sarcasm in text. Written English language, English lacks a standard way to mark irony, and several forms of punctuation have been proposed. Among the oldest and most frequently attested is the percontation point proposed by English printer Henry Denham in the 1580s, and the irony mark, used by Marcellin Jobard and French poet Alcanter de Brahm during the 19th century. Both marks take the form of a reversed question mark, "⸮". Irony punctuation is primarily used to indicate that a sentence should be understood at a second level. A bracketed Exclamation point#English, exclamation point or question mark as well as scare quotes are also occasionally used to express irony or sarcasm.

In 1668, John Wilkins, in ''An Essay towards a Real Character and a Philosophical Language'', proposed using an Inverted question and exclamation marks, inverted exclamation mark to punctuate ironic statements. In 1841, Marcellin Jobard, a Belgian newspaper publisher, introduced an irony mark in the shape of an oversized arrow head with small stem (rather like an ideogram of a Christmas tree). The next year he expanded his idea, suggesting the symbol could be used in various orientations (on its side, upside down, etc.) to mark "a point of irritation, an indignation point, a point of hesitation". 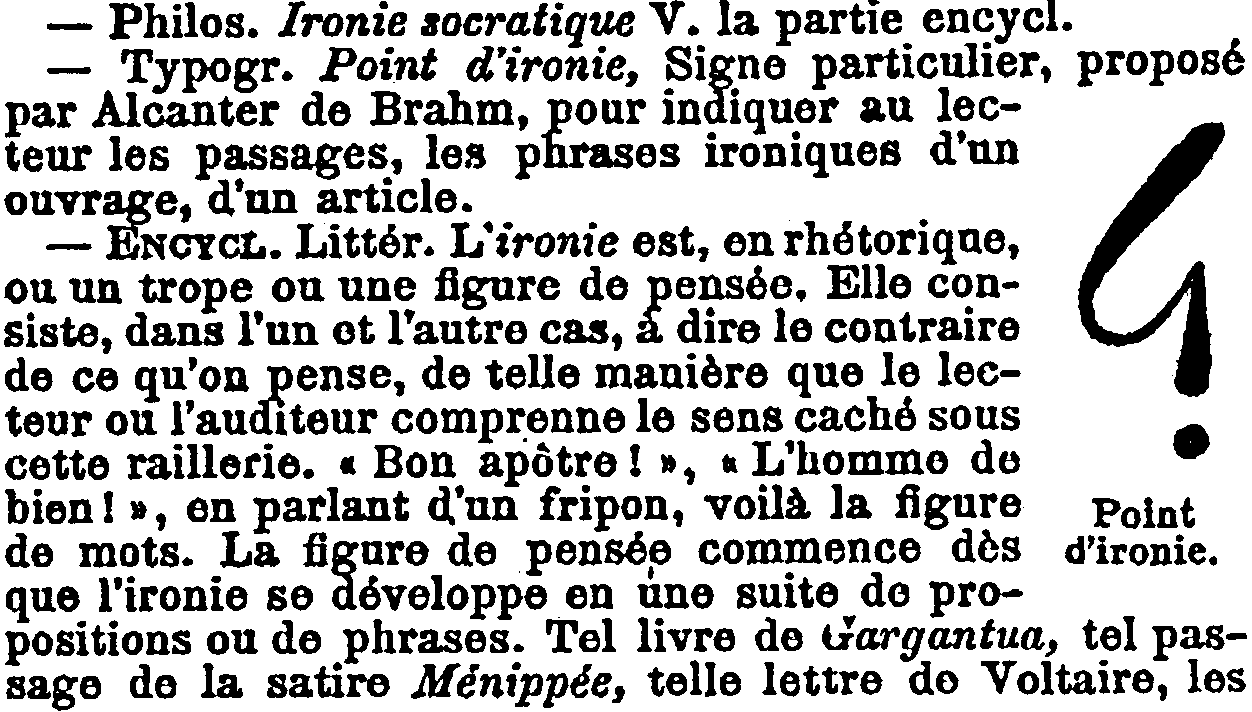 The irony point (french: point d'ironie) was proposed by the French poet Alcanter de Brahm (alias, Marcel Bernhardt) in his 1899 book ''L'ostensoir des ironies'' to indicate that a sentence should be understood at a second level (irony, sarcasm, etc.). It is illustrated by a glyph resembling, but not identical to, a small, elevated, backward-facing question mark. The same mark was used earlier by Marcellin Jobard in an article dated June 11, 1841, and commented in an 1842 report. Hervé Bazin, in his essay "Plumons l'Oiseau" ("Let's pluck the bird", 1966), used the Greek letter Psi (letter), ψ with a dot below for the same purpose . In the same work, the author proposed five other innovative punctuation marks: the "doubt point" , "conviction point" , "acclamation point" , "authority point" , and "love point" . In March 2007, the Dutch foundation CPNB ''(Collectieve Propaganda van het Nederlandse Boek)'' presented another design of an irony mark, the ''ironieteken'': (

Tom Driberg recommended that ironic statements should be printed in italics that lean the other way from conventional italics. Also called Sartalics.

Scare quotes are a particular use of quotation marks. They are placed around a word or phrase to indicate that it is not used in the fashion that the writer would personally use it. In contrast to the nominal typographic purpose of quotation marks, the enclosed words are not necessarily quoted from another source. When read aloud, various techniques are used to convey the sense, such as prepending the addition of "so-called" or a similar word or phrase of disdain, using a sarcastic or mocking tone, or using air quotes, or any combination of the above.

In certain Ethiopic languages, sarcasm and unreal phrases are indicated at the end of a sentence with a sarcasm mark called ''temherte slaqî'' or ''temherte slaq'', a character that looks like the inverted exclamation point (U+00A1) ( ¡ ).

Rhetorical questions in some informal situations can use a bracketed question mark, e.g., "Oh, really[?]". The equivalent for an ironic or sarcastic statement would be a bracketed exclamation mark, e.g., "Oh, really[!]". Subtitles, such as in Teletext, sometimes use an exclamation mark within brackets or parentheses to mark sarcasm. It is common in online conversation among some Internet users to use an XML closing tag: . Over time, it has evolved to lose the angle brackets (/sarcasm) and has subsequently been shortened to /sarc or /s (not to be confused with the HTML end tag used to end a strikethrough, struck-through passage). This usage later evolved into tone indicators. Another example is bracketing text with the symbol for the element iron as a pun of the word "irony" ( and ) in order to denote irony. Typing in all-capital letters, and emoticons like "Rolling eyes", ":>", and ":P," as well as using the "victory hand" dingbat / emoji () character to simulate air quotes, are often used as well, particularly in instant messaging, while a Twitter-style hashtag, #sarcasm, is also increasingly common. In many gaming communities, the word "Kappa" is frequently used to display sarcasm as well as joking intent. This is due to the word acting as an emoticon on Twitch (service), Twitch, a livestreaming site, where it has gained popularity for such purpose. It is also common to use the combination of an open-parenthesis and an interrogation symbol as "(?" to mark irony. A "SarcMark" symbol requiring custom computer font software was proposed in 2010. Another method of expressing sarcasm is by placing a tilde (~) adjacent to the punctuation. This allows for easy use with any keyboard, as well as variation. Variations include dry sarcasm (~.), enthusiastic sarcasm (~!), and sarcastic questions (~?). The sports blog ''Card Chronicle'' has adopted this methodology by inserting (~) after the period at the end of the sentence. It has also been adopted by the Udacity Machine Learning Nanodegree community. On the Internet, it is common to see Alternating caps, alternating uppercase and lowercase lettering to convey a mocking or sarcastic tone, often paired with an image of SpongeBob SquarePants (character), SpongeBob SquarePants acting like a chicken in the form of Internet meme, memes. ''CollegeHumor'' jokingly proposed new marks called “sarcastisies” which resemble ragged, or zig-zagged parentheses, used to enclose sarcastic remarks.


Ironic Serif: A Brief History of Typographic Snark and the Failed Crusade for an Irony Mark

How to Tell a Joke on the Internet; The new typography of irony
{{navbox punctuation Irony, Punctuation Punctuation