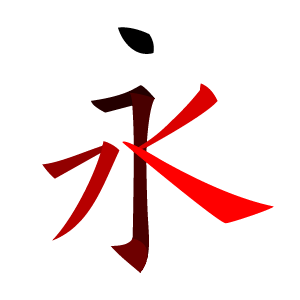 The study and classification of CJK strokes is used for: #understanding Chinese character calligraphy – the correct method of writing, shape formation and stroke order required for character legibility; #understanding stroke changes according to the style that is in use; #defining stroke naming and counting conventions; #identifying fundamental components of Han radicals; and #their use in computing.

(Vertical / ') is classified as a basic stroke because it is a single stroke that forms a line moving in one direction. *

(Vertical – Horizontal – Vertical / ) is classified as a compound stroke because it is a single stroke that forms a line that includes one or more abrupt changes in direction. This example is a sequence of three basic strokes written without lifting the writing instrument such as the ink brush from the writing surface.

All strokes have direction. They are unidirectional and start from one entry point. As such, they are usually not written in the reverse direction by native users. Here are some examples:

CJK strokes are an attempt to identify and classify all single-stroke components that can be used to write Han radicals. There are some thirty distinct types of strokes recognized in Chinese characters, some of which are compound strokes made from basic strokes. The compound strokes comprise more than one movement of the writing instrument, and many of these have no agreed-upon name.

A basic stroke is a single calligraphic mark moving in one direction across a writing surface. The following table lists a selection of basic strokes divided into two stroke groups: simple and combining. "Simple strokes" (such as Horizontal / ''Héng'' and Dot / ''Diǎn'') can be written alone. "Combining strokes" (such as Zig / ''Zhé'' and J hook / ''Gōu'') never occur alone, but must be paired with at least one other stroke forming a compound stroke. Thus, they are not in themselves individual strokes. Note, the basic stroke ''Diǎn'' "Dot" is rarely a real dot. Instead it usually takes the shape of a very small line pointing in one of several directions, and may be long enough to be confused with other strokes.

(Vertical – J hook / ''Shù Gōu''). A stroke naming convention sums the names of the basic strokes, in the writing order. An exception to this applies when a stroke makes a turn of 90° (and only of 90°) in the Simplified Chinese names. Horizontal

(Shù) strokes are identified only once when they appear as the first stroke of a compound; any single stroke with successive 90° turns down or to the right are indicated by a Zag 折 (pinyin: ''Zhé'') "Break". For example, an initial ''Shù'' followed by an abrupt turn right produces

(''Shù Zhé''). In the same way, an initial ''Shù'' followed by an abrupt turn right followed by a second turn down produces

Organization systems used to describe and differentiate strokes may include the use of roman letters, Chinese characters, numbers, or a combination of these devices. Two methods of organizing CJK strokes are by: #Classification schemes that describe strokes by a naming convention or by conformity to a taxonomy; and #Categorization schemes that differentiate strokes by numeric or topical grouping. In classification schemes, stroke forms are described, assigned a representative character or letterform, and may be arranged in a hierarchy. In categorization schemes, stroke forms are differentiated, sorted and grouped into like categories; categories may be topical, or assigned by a numeric or alpha-numeric nominal number according to a designed numbering scheme. ;Benefits Organizing strokes into a hierarchy aids a user's understanding by bringing order to an obtuse system of writing that has organically evolved over the period of centuries. In addition, the process of recognizing and describing stroke patterns promotes consistency of stroke formation and usage. When organized by naming convention, classification allows a user to find a stroke quickly in a large stroke collection, makes it easier to detect duplication, and conveys meaning when comparing relationships between strokes. When organized by numbering scheme, categorization aids a user in understanding stroke differences, and makes it easier to make predictions, inferences and decisions about a stroke. ;Limitations Strokes are described and differentiated using the criteria of visual qualities of a stroke. Because this can require subjective interpretation, CJK strokes cannot be placed into a single definitive classification scheme because stroke types lack a universal consensus on the description and number of basic and compound forms. CJK strokes cannot be placed into a single definitive categorization scheme due to visual ambiguity between strokes, and therefore cannot be segregated into mutually-exclusive groups. Other factors inhibiting organization based on visual criteria is the variation of writing styles, and the changes of appearance that a stroke undergoes within various characters.

A naming convention is a classification scheme where a controlled vocabulary is used systematically to describe the characteristics of an item. The naming convention for a CJK stroke is derived from the path mark left by the writing instrument. In this instance roman letters are concatenated to form a stroke name is a sequence of one or more roman letters indicating the component strokes used to create the CJK stroke. The first letter of the Han radical’s pinyin pronunciation represents each basic stroke. In a basic stroke example, H represents the stroke

named 横 (pinyin: ''Héng''); in a compound example, HZT represents 横折提 (pinyin: ''Héng Zhé Tí''). While no consensus exists, there are up to 12 distinct basic strokes that are identified by a unique Han radical. There are many CJK compound strokes, however there is no consensus for sequence letter naming of compound strokes using the basic strokes. The following table demonstrates the CJK stroke naming convention: Besides, some strokes have been unified or abandoned in Unicode: Notice that some names in the list have not followed the rules of controlled vocabulary. For example, stroke P is not found in the compound stroke PN. The name "PN" comes from 平捺 (pinyin: ''Píng Nà''), not 撇捺 (pinyin: ''Piě Nà''). The meaning of 平 (pinyin: ''Píng'') is flat. So we should call it "BN" 扁捺 (pinyin: Biǎn Nà) if we follow the rule strictly. Letter "Z" in stroke SWZ means 左 (pinyin: ''Zuǒ''), not 折 (pinyin: ''Zhé''). The meaning of 左 is "left", it is not defined in the naming convention. Moreover, some 折 (pinyin: ''Zhé'') are far more than or far less than 90°, such as stroke HZZZG, stroke HZZP and stroke PZ. Some strokes are not included in the Unicode standard, such as stroke

is usually written as

(It was called "stroke DN", but Unicode has rejected it).

A numbering scheme is a categorization method where like-item strokes are grouped into categories labeled by nominal numbers. Category numbering may be an index of numbers of types, with sub-types indicated by decimal point followed by another number or a letter. The following table is a common numbering scheme that uses similar names as the roman letter naming convention, but the stroke forms are grouped into major category types (1 to 5), which further break down into 25 sub-types in category 5. Some strokes are not included in the numbering scheme, such as stroke

, etc. Besides, ways of grouping strokes are different from the Unicode standard. For example, stroke

is merged into stroke

in Unicode system, while it is merged into

in this numbering scheme.

Stroke order refers to the order in which the strokes of a Chinese character are written. A stroke is a movement of a writing instrument on a writing surface. Because most Chinese characters have many strokes, certain stroke orders guidelines are recommended to ensure speed, accuracy, and legibility in composition. Also, teachers enforce exactly one stroke order for each character, marking every deviation as a mistake, so everyone writes these characters the same way. The stroke order follows a few simple rules, though, which aids in memorizing these. To write CJK characters, one must know how to write CJK strokes, and thus, needs to identify the basic strokes that make up a character.

The Eight Principles of ''Yong'' explain how to write eight common strokes in regular script which are found all in the one character, (, "forever", "permanence"). It was traditionally believed that the frequent practice of these principles as a beginning calligrapher could ensure beauty in one's writing. 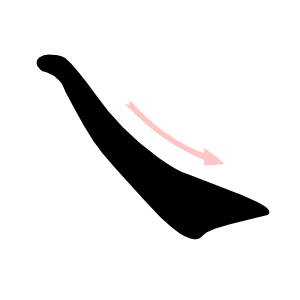 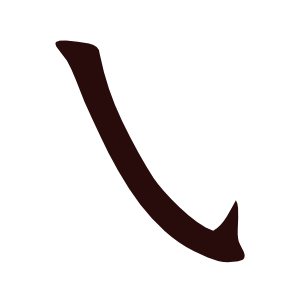 The stroke count method is based on the order of strokes to input characters on Chinese mobile phones. As part of Chinese character encoding, there have been several proposals to encode the CJK strokes, most of time with a total around 35~40 entries. Most notable is the current Unicode block “CJK Strokes” (U+31C0..U+31EF), with 36 types of strokes:

Yannis Haralambous: Seeking Meaning in a Space Made out of Strokes, Radicals, Characters and Compounds