Staff sergeant is a rank of non-commissioned officer used in the armed forces of many countries. It is also a police rank in some police services.

In origin, certain senior sergeants were assigned to administrative, supervisory, or other specialist duties as part of the staff of a British army regiment. As such they held seniority over sergeants who were members of a battalion or company, and were paid correspondingly increased wages. Their seniority was indicated by a crown worn above the three sergeant's stripes on their uniform rank markings.

In the Australian Army and Cadets, the rank of staff sergeant is being phased out. It was usually held by the company quartermaster sergeant or the holders of other administrative roles. Staff sergeants are always addressed as "Staff Sergeant" or "Staff", never as "Sergeant" as it degrades their rank. "Chief" is another nickname though this is only used for the company chief clerk (in some instances the chief clerk role can be filled by another non-commissioned rank (but not warrant officer) and still be referred to as "Chief"). A staff sergeant ranks above sergeant and below warrant officer class 2. 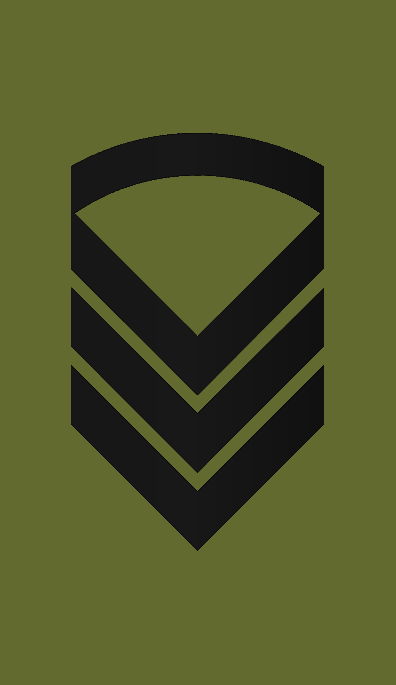 :''For further information, see Military ranks and insignia of Norway.'' In the Norwegian Defence Forces, the tasks and responsibilities of the staff sergeant (''oversersjant'') are not clear; quite recently, in January 2016, Norway replaced their old rank system, and implemented a new, which is more adapted to other NATO members. In 1975, all of the Norwegian military branches abolished the system of using non-commissioned officers. Now, however, Norway is reintroducing the Non-Commissioned Officer Corps, allowing people to become officers without graduating from a military academy or having a university degree.

A staff sergeant (SSG) in the Singapore Armed Forces ranks above first sergeant and below master sergeant. It is the second most senior specialist rank. Staff sergeants are addressed as "Staff Sergeant" or "Staff", but never "Sergeant". Staff sergeants may be appointed as company sergeant major if they are due for promotion to master sergeant. They are usually addressed as "CSM" in camp, although in the past they were referred to as "Encik", which is now used to address only warrant officers. The rank insignia consists of two chevrons pointing up and three chevrons pointing down, with the Singapore coat of arms in the middle.

Between 2009-2019 the rank of Sergeant was the Swedish equivalent of a NATO OR-5 rank, denoting a squad leader (8-12 soldiers). Apart from the OR-6 First Sergeant, Sweden had never had different sergeant ranks. The rank Furir is reinstated for squad leaders since october 1 2019, as are Sergeant and First Sergeant (OR-6 - equivalents). The rank of Furir was used for the role between the 16th century and 2009. The title come from the French ''fourrier'' ("who provide fodder"), from ''feurre'', straw. The verb furera from 1600/1700th century means 'responsible for quartering'. The Furir rank was reinstated in the 2019 Swedish defence decision and replaces the rank of Sergeant since then.

Staff Sergeant () of the R.O.C Armed Forces in Taiwan ranks below Sergeant and above Corporal, making it different from the armed forces of other countries where staff sergeant ranks higher than sergeant. The rank of Staff Sergeant exists in the Army, Air Force and the Marine Corps, and is equivalent to the Petty officer 2nd Class in the Navy.

In the British Army, staff sergeant (SSgt or formerly S/Sgt) ranks above sergeant and below warrant officer class 2. The rank is given a NATO code of OR-7. The insignia is the monarch's crown above three downward pointing chevrons. Staff sergeants can also hold other appointments, such as company quartermaster sergeant, and are usually known by that appointment if held. The equivalent rank in infantry regiments is colour sergeant, and holders are known by that title no matter what their appointment. In the Household Cavalry the equivalent rank is staff corporal. British staff sergeants are never referred to or addressed as "Sergeant", which would be reducing their rank, but are referred to and addressed as "Staff Sergeant" or "Staff" ("Staff Jones", for instance) or by their appointment or its abbreviation. Quartermaster sergeants are often addressed as "Q". In most cavalry regiments, staff sergeants are addressed as "Sergeant Major", which is assumed to derive from the original rank of troop sergeant major, or as "Sir" by subordinates. Flight sergeant and chief technician are the Royal Air Force equivalents. Chief petty officer is the equivalent in the Royal Navy and colour sergeant in the Royal Marines.

Staff Sergeant (SSgt) is E-6 rank (NATO code OR-6) in the U.S. Marine Corps (USMC), ranking above Sergeant and below Gunnery Sergeant. This grade is normally achieved after 10 years in service. A Marine Staff Sergeant is a staff non-commissioned officer rank (SNCO). These SNCOs are career Marines serving as staff sergeants through Master Gunnery Sergeant/Sergeant Major/Sergeant Major of the Marine Corps in grades E-6 through E-9. Together, they are responsible to the commanding officer for the welfare, morale, discipline, and efficiency of Marines in their charge. Using their experience gained by time in service, including previous deployments, proven military skills and advanced leadership training, SNCOs are responsible for the proficiency, training and administrative issue of their Marines. Staff sergeants in infantry, and light armored reconnaissance units typically serve in the billet of platoon sergeant of a 42-member rifle platoon, an 18-member scout sniper platoon (infantry battalion H&S company S-2 section) or a 24-member light armored reconnaissance platoon. In reconnaissance battalions, staff sergeants usually serve as squad/team leaders of a 6-member reconnaissance team. When serving as a platoon sergeant, they are the senior tactical advisor to the platoon commander (an officer) and the second-in-command of the platoon. Staff sergeants also serve as a section leaders in weapons platoons (the platoon sergeant being a gunnery sergeant in weapons platoons) leading from 8–27 Marines in a crew-served weapons section (i.e., machine guns, mortars, assault weapons/rockets, and anti-tank missiles). In artillery batteries staff sergeants serve as either the local security chief/platoon sergeant of a firing battery's 94-member firing platoon or as section chief of a 10-member artillery section (viz., gun crew). In tank and assault amphibian units, they serve as section leaders in charge of 8 Marines manning two tanks or 9 Marines manning three AAVs, respectively, under a gunnery sergeant serving as platoon sergeant. When there is a shortage of gunnery sergeants, they may be assigned to a billet of platoon sergeant or company/battery gunnery sergeant, and in the event of a shortage of officers may be temporarily billeted as a platoon commander. Staff sergeants also serve as staff non-commissioned officers in military staff sections and headquarters and service companies/headquarters batteries at battalion/squadron, regiment/group, division/wing level. Typical staff sergeant billets found in combat support companies and battalion, regiment, and division headquarters are: Personnel Chief, Senior Administration Clerk, Career Planner, Human Affairs NCO, Education/Personal Affairs Assistant, Senior Combat Photographer, Substance Abuse Counselor, Reports NCO, MAGTF Plans Chief, NBC Defense NCO/Training NCO, Intelligence Chief, Senior Intelligence Analyst, Special Security Office Chief, Operations Chief, Operations Assistant, Logistics Chief, Maintenance Management Chief, Ammunition Chief, Senior Ammunition Technician, Local Security Chief, Senior Radio Technician, Wire Chief/Supervisor, Radio Supervisor, Senior Field Radio Operator, Supply Chief, Senior General Warehouseman, Senior Small Arms Repair Technician, Senior Electro-Optical Ordnance Repairman, Motor Vehicle Maintenance Chief, Motor Operations Chief, Assistant Mess Manager, Cook Specialist, and Senior Chief Cook. In Command Element, Combat Logistics Element, and Aviation Combat Element organizations, staff sergeants serve in basically similar positions of responsibility, authority, and accountability as their Ground Combat Element counterparts, with perhaps slightly different titles, such as Branch/Section Chief/NCOIC (Non-Commissioned Officer-In-Charge) in various work centers (e.g. mechanical, avionics, electrical, and ordnance divisions) within the aircraft maintenance department of a Marine aircraft squadron. Non Fleet Marine Force (or other operating forces) assignments may include supervisory or staff positions in recruiting, drill instructor, Marine Security Guard, Naval ROTC instructor or service school instructor, and major/joint/combined headquarters commands. Staff sergeants, as are all Marine Corps SNCOs, addressed and referred to by their complete rank title (i.e. "Staff Sergeant Jones" or simply "Staff Sergeant," with the abbreviation "SSgt"). The rank of Staff Sergeant in the USMC was created in 1923 to coincide with the U.S. Army's ranks. Until the end of WW2, the insignia of platoon sergeant was three chevrons and a rocker, with Staff Sergeant having a horizontal stripe instead of a rocker below the chevrons. After the separate rank of Platoon Sergeant was eliminated, the Staff Sergeant rank switched over to the rocker insignia and Staff Sergeants held the platoon sergeant's billet.

Staff sergeant (SSgt) is E-5 in the U.S. Air Force. It ranks above senior airman and below technical sergeant. It is the Air Force's first non-commissioned officer rank, as well as the first Air Force rank to which promotion is attained on a competitive basis. Sergeants, also known in Air Force jargon as "buck sergeant"', no longer exist, having been eliminated in the 1990s after sharing the same pay grade with that of the rank of senior airman (E-4). Staff sergeants are expected to be technically proficient and function as first-line supervisors within a 'work center'. After being selected for promotion, senior airmen must attend Airman Leadership School, which teaches them basic leadership skills and how to write performance reports to become staff sergeant. The term of address is "Staff Sergeant" or "Sergeant". High year of tenure is 20 years as of 2018.

The rank of cadet staff sergeant (CSSG or C/SSgt) is used by many cadet organisations around the world, including the Army Cadet Force and the Army Section of the Combined Cadet Force in the United Kingdom, and the cadet program of Civil Air Patrol in the United States.

The rank of staff sergeant is used in some police forces to indicate a senior supervisor. The rank is used, for example, in most Canadian police services. Other national police services (for example, Cyprus) have a corresponding rank of senior sergeant. In the United Kingdom, a few police forces formerly used the rank of station sergeant, with the same rank insignia as an army staff sergeant. The Hong Kong Police Force still uses this rank. In the Philippines, as of February 8, 2019, the rank of staff sergeant is currently being used by the Philippine National Police as they adopt a new ranking classification, eliminating confusion of old ranks. The rank stands above the Police Corporal and below the Police Master sergeant.