Salmon is the common name for several species of ray-finned fish in the family Salmonidae. Other fish in the same family include trout, char, grayling, and whitefish. Salmon are native to tributaries of the North Atlantic (genus ''Salmo'') and Pacific Ocean (genus ''Oncorhynchus''). Many species of salmon have been introduced into non-native environments such as the Great Lakes of North America and Patagonia in South America. Salmon are intensively farmed in many parts of the world. Typically, salmon are anadromous: they hatch in fresh water, migrate to the ocean, then return to fresh water to reproduce. However, populations of several species are restricted to fresh water throughout their lives. Folklore has it that the fish return to the exact spot where they hatched to spawn. Tracking studies have shown this to be mostly true. A portion of a returning salmon run may stray and spawn in different freshwater systems; the percent of straying depends on the species of salmon. Homing behavior has been shown to depend on olfactory memory. Salmon date back to the Neogene.

The term "salmon" comes from the Latin ''salmo'', which in turn might have originated from ''salire'', meaning "to leap". The nine commercially important species of salmon occur in two genera. The genus ''Salmo'' contains the Atlantic salmon, found in the North Atlantic, as well as many species commonly named trout. The genus ''Oncorhynchus'' contains eight species which occur naturally only in the North Pacific. As a group, these are known as Pacific salmon. Chinook salmon have been introduced in New Zealand and Patagonia. Coho, freshwater sockeye, and Atlantic salmon have been established in Patagonia, as well.     † Both the ''Salmo'' and ''Oncorhynchus'' genera also contain a number of species referred to as trout. Within ''Salmo'', additional minor taxa have been called salmon in English, i.e. the Adriatic salmon (''Salmo obtusirostris'') and Black Sea salmon (''Salmo labrax''). The steelhead anadromous form of the rainbow trout migrates to sea, but it is not termed "salmon". Also, there are several other species which are not true salmon, as in the above list but have common names which refer to them as being salmon. Of those listed below, the Danube salmon or ''huchen'' is a large freshwater salmonid related to the salmon above, but others are marine fishes of the unrelated Perciformes order: ''Eosalmo driftwoodensis'', the oldest known salmon in the fossil record, helps scientists figure how the different species of salmon diverged from a common ancestor. The British Columbia salmon fossil provides evidence that the divergence between Pacific and Atlantic salmon had not yet occurred 40 million years ago. Both the fossil record and analysis of mitochondrial DNA suggest the divergence occurred 10 to 20 million years ago. This independent evidence from DNA analysis and the fossil record indicate that salmon divergence occurred long before the glaciers (of Quaternary glaciation) began their cycle of advance and retreat.

*Atlantic salmon (''Salmo salar'') reproduce in northern rivers on both coasts of the Atlantic Ocean. **Landlocked salmon (''Salmo salar'' m. ''sebago'') live in a number of lakes in eastern North America and in Northern Europe, for instance in lakes Sebago, Onega, Ladoga, Saimaa, Vänern, and Winnipesaukee. They are not a different species from the Atlantic salmon but have independently evolved a non-migratory life cycle, which they maintain even when they could access the ocean. *Chinook salmon (''Oncorhynchus tshawytscha'') are also known in the United States as king salmon or blackmouth salmon, and as spring salmon in British Columbia. Chinooks are the largest of all Pacific salmon, frequently exceeding . The name tyee is used in British Columbia to refer to Chinook over 30 pounds, and in the Columbia River watershed, especially large Chinooks were once referred to as June hogs. Chinook salmon are known to range as far north as the Mackenzie River and Kugluktuk in the central Canadian arctic, and as far south as the Central California coast. *Chum salmon (''Oncorhynchus keta'') is known as dog, keta, or calico salmon in some parts of the US. This species has the widest geographic range of the Pacific species: in the eastern Pacific from north of the Mackenzie River in Canada to south of the Sacramento River in California and in the western Pacific from Lena River in Siberia to the island of Kyūshū in the Sea of Japan. *Coho salmon (''Oncorhynchus kisutch'') are also known in the US as silver salmon. This species is found throughout the coastal waters of Alaska and British Columbia and as far south as Central California (Monterey Bay). It is also now known to occur, albeit infrequently, in the Mackenzie River. *Masu salmon or cherry salmon (''Oncorhynchus masou'') are found only in the western Pacific Ocean in Japan, Korea, and Russia. A land-locked subspecies known as the Taiwanese salmon or Formosan salmon (''Oncorhynchus masou formosanus'') is found in central Taiwan's Chi Chia Wan Stream. *Pink salmon (''Oncorhynchus gorbuscha''), known as humpies in southeast and southwest Alaska, are found in the western Pacific from Lena River in Siberia to Korea, found throughout northern Pacific, and in the eastern Pacific from the Mackenzie River in Canada to northern California, usually in shorter coastal streams. It is the smallest of the Pacific species, with an average weight of . *Sockeye salmon (''Oncorhynchus nerka'') is also known in the US (especially Alaska) as red salmon. This lake-rearing species is found in the eastern Pacific from Bathurst Inlet in the Canadian Arctic to Klamath River in California, and in the western Pacific from the Anadyr River in Siberia to northern Hokkaidō island in Japan. Although most adult Pacific salmon feed on small fish, shrimp, and squid, sockeye feed on plankton they filter through gill rakers. Kokanee salmon are the land-locked form of sockeye salmon. *Danube salmon, or huchen (''Hucho hucho''), are the largest permanent freshwater salmonid species. 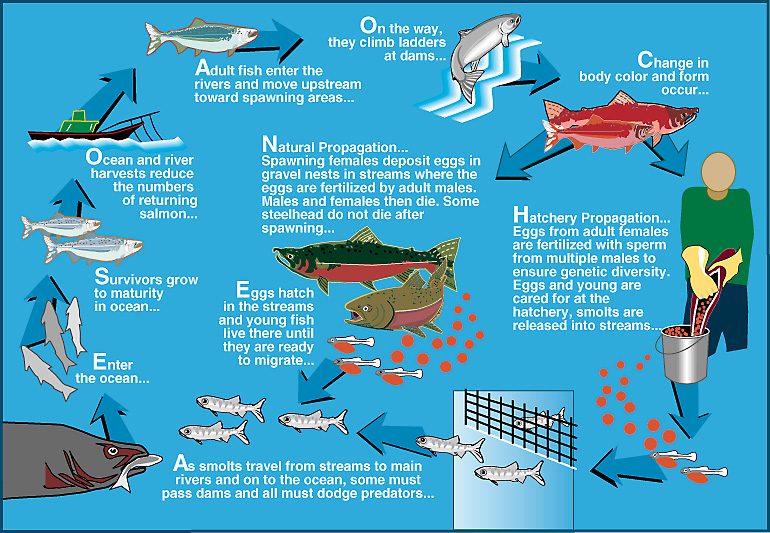 Salmon eggs are laid in freshwater streams typically at high latitudes. The eggs hatch into alevin or sac fry. The fry quickly develop into parr with camouflaging vertical stripes. The parr stay for six months to three years in their natal stream before becoming smolts, which are distinguished by their bright, silvery colour with scales that are easily rubbed off. Only 10% of all salmon eggs are estimated to survive to this stage. The smolt body chemistry changes, allowing them to live in salt water. While a few species of salmon remain in fresh water throughout their life cycle, the majority are anadromous and migrate to the ocean for maturation: in these species, smolts spend a portion of their out-migration time in brackish water, where their body chemistry becomes accustomed to osmoregulation in the ocean. This body chemistry change is hormone-driven, causing physiological adjustments in the function of osmoregulatory organs such as the gills, which leads to large increases in their ability to secrete salt. Hormones involved in increasing salinity tolerance include insulin-like growth factor I, cortisol, and thyroid hormones, which permits the fish to endure the transition from a freshwater environment to the ocean. The salmon spend about one to five years (depending on the species) in the open ocean, where they gradually become sexually mature. The adult salmon then return primarily to their natal streams to spawn. Atlantic salmon spend between one and four years at sea. When a fish returns after just one year's sea feeding, it is called a grilse in Canada, Britain, and Ireland. Grilse may be present at spawning, and go unnoticed by large males, releasing their own sperm on the eggs. Prior to spawning, depending on the species, salmon undergo changes. They may grow a hump, develop canine-like teeth, or develop a kype (a pronounced curvature of the jaws in male salmon). All change from the silvery blue of a fresh-run fish from the sea to a darker colour. Salmon can make amazing journeys, sometimes moving hundreds of miles upstream against strong currents and rapids to reproduce. Chinook and sockeye salmon from central Idaho, for example, travel over and climb nearly from the Pacific Ocean as they return to spawn. Condition tends to deteriorate the longer the fish remain in fresh water, and they then deteriorate further after they spawn, when they are known as kelts. In all species of Pacific salmon, the mature individuals die within a few days or weeks of spawning, a trait known as semelparity. Between 2 and 4% of Atlantic salmon kelts survive to spawn again, all females. However, even in those species of salmon that may survive to spawn more than once (iteroparity), postspawning mortality is quite high (perhaps as high as 40 to 50%).

To lay her roe, the female salmon uses her tail (caudal fin), to create a low-pressure zone, lifting gravel to be swept downstream, excavating a shallow depression, called a redd. The redd may sometimes contain 5,000 eggs covering . The eggs usually range from orange to red. One or more males approach the female in her redd, depositing sperm, or milt, over the roe. The female then covers the eggs by disturbing the gravel at the upstream edge of the depression before moving on to make another redd. The female may make as many as seven redds before her supply of eggs is exhausted. Each year, the fish experiences a period of rapid growth, often in summer, and one of slower growth, normally in winter. This results in ring formation around an earbone called the otolith (annuli), analogous to the growth rings visible in a tree trunk. Freshwater growth shows as densely crowded rings, sea growth as widely spaced rings; spawning is marked by significant erosion as body mass is converted into eggs and milt. Freshwater streams and estuaries provide important habitat for many salmon species. They feed on terrestrial and aquatic insects, amphipods, and other crustaceans while young, and primarily on other fish when older. Eggs are laid in deeper water with larger gravel, and need cool water and good water flow (to supply oxygen) to the developing embryos. Mortality of salmon in the early life stages is usually high due to natural predation and human-induced changes in habitat, such as siltation, high water temperatures, low oxygen concentration, loss of stream cover, and reductions in river flow. Estuaries and their associated wetlands provide vital nursery areas for the salmon prior to their departure to the open ocean. Wetlands not only help buffer the estuary from silt and pollutants, but also provide important feeding and hiding areas. Salmon not killed by other means show greatly accelerated deterioration (phenoptosis, or "programmed aging") at the end of their lives. Their bodies rapidly deteriorate right after they spawn as a result of the release of massive amounts of corticosteroids.

In the Pacific Northwest and Alaska, salmon are keystone species, supporting wildlife such as birds, bears and otters.