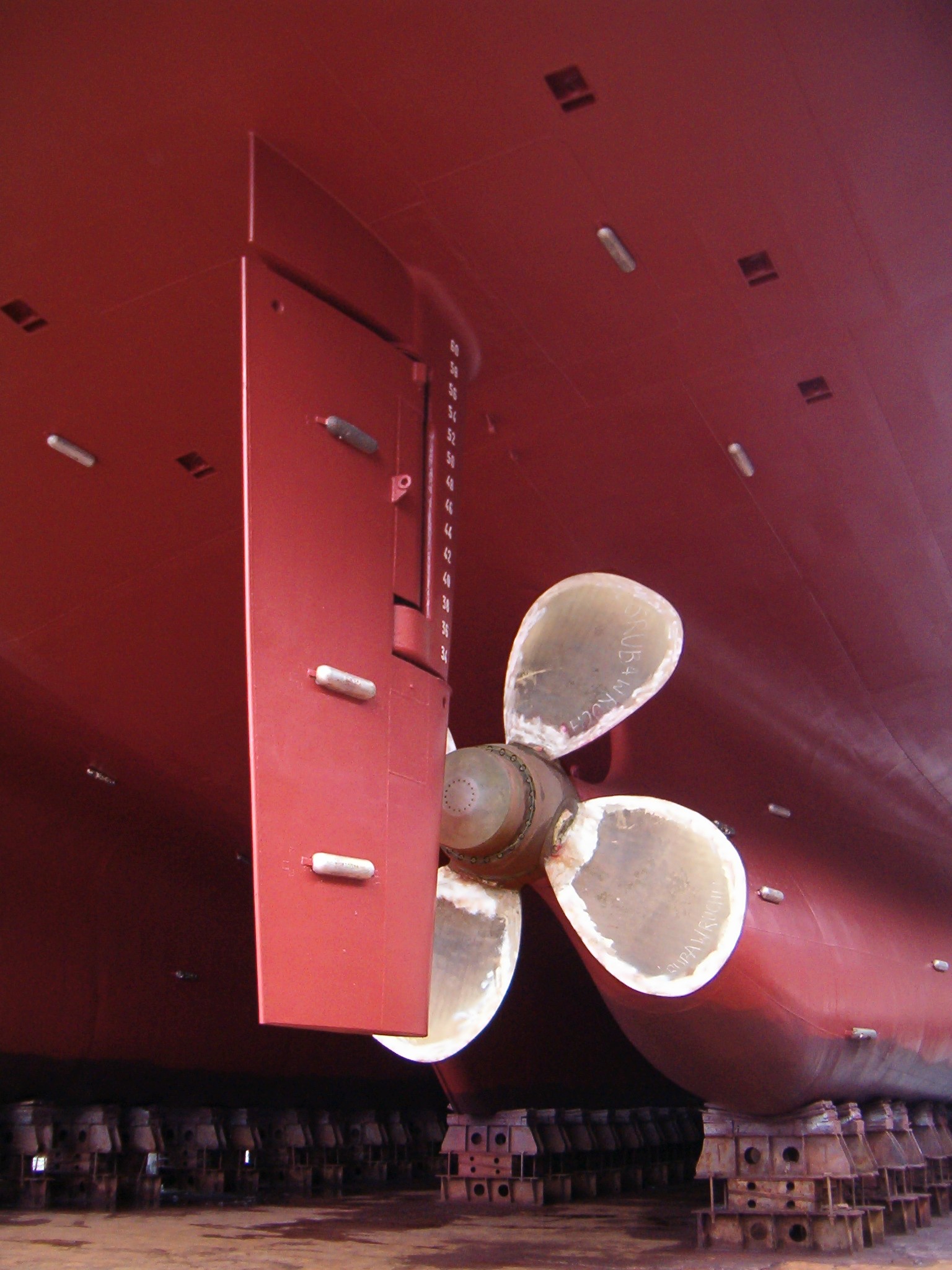 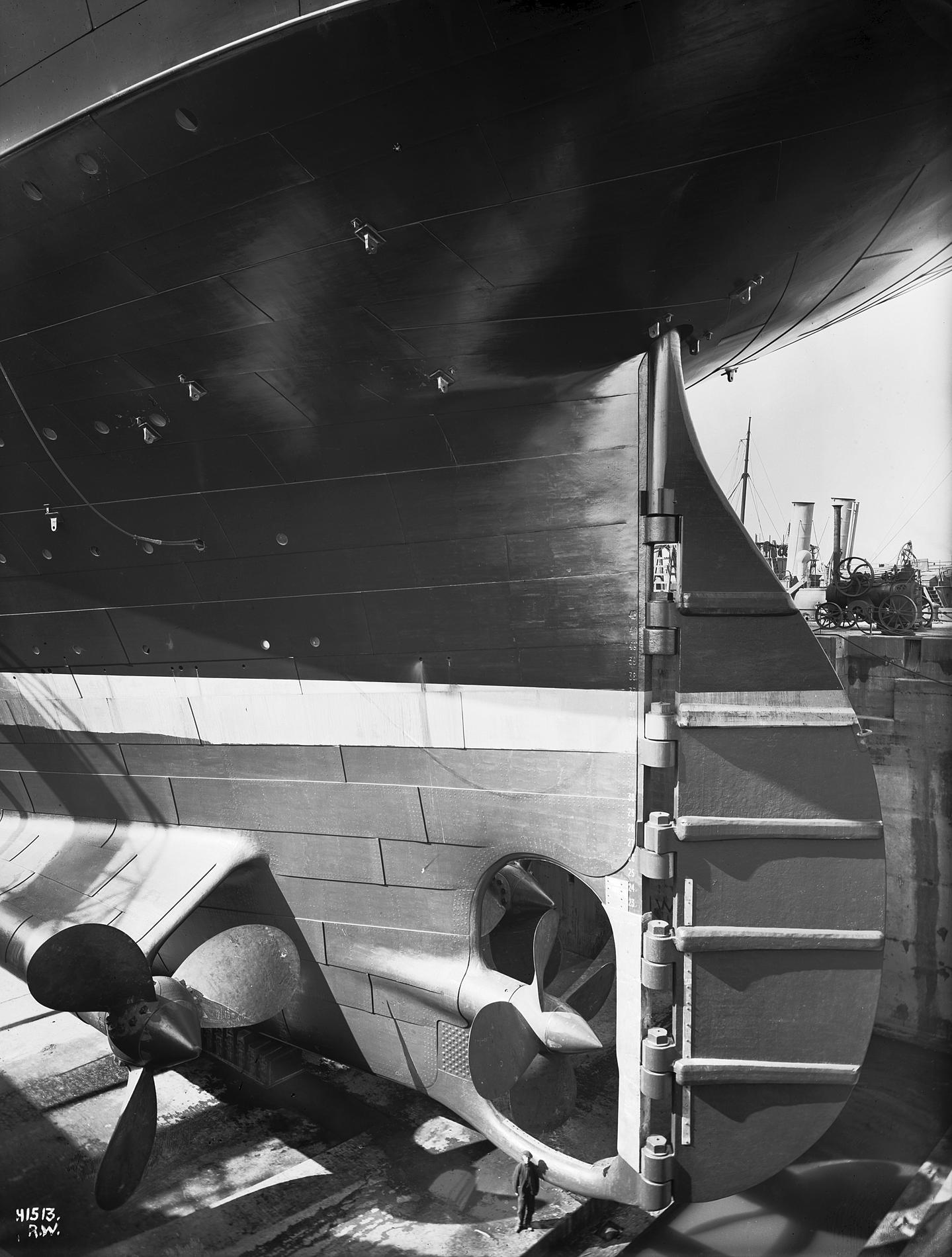 A rudder is a primary control surface used to steer a ship, boat, submarine, hovercraft, aircraft, or other conveyance that moves through a fluid medium (generally air or water). On an aircraft the rudder is used primarily to counter adverse yaw and p-factor and is not the primary control used to turn the airplane. A rudder operates by redirecting the fluid past the hull (watercraft) or fuselage, thus imparting a turning or yawing motion to the craft. In basic form, a rudder is a flat plane or sheet of material attached with hinges to the craft's stern, tail, or after end. Often rudders are shaped so as to minimize hydrodynamic or aerodynamic drag. On simple watercraft, a tiller—essentially, a stick or pole acting as a lever arm—may be attached to the top of the rudder to allow it to be turned by a helmsman. In larger vessels, cables, pushrods, or hydraulics may be used to link rudders to steering wheels. In typical aircraft, the rudder is operated by pedals via mechanical linkages or hydraulics.

History of the rudder

Generally, a rudder is "part of the steering apparatus of a boat or ship that is fastened outside the hull", that is denoting all different types of oars, paddles, and rudders. More specifically, the steering gear of ancient vessels can be classified into side-rudders and stern-mounted rudders, depending on their location on the ship. A third term, steering oar, can denote both types. In a Mediterranean context, side-rudders are more specifically called quarter-rudders as the later term designates more exactly the place where the rudder was mounted. Stern-mounted rudders are uniformly suspended at the back of the ship in a central position. Although some classify a steering oar as a rudder, others argue that the steering oar used in ancient Egypt and Rome was not a true rudder and define only the stern-mounted rudder used in ancient Han dynasty China as a true rudder. The steering oar has the capacity to interfere with handling of the sails (limiting any potential for long ocean-going voyages) while it was fit more for small vessels on narrow, rapid-water transport; the rudder did not disturb the handling of the sails, took less energy to operate by its helmsman, was better fit for larger vessels on ocean-going travel, and first appeared in ancient China during the 1st century AD. In regards to the ancient Phoenician (1550–300 BC) use of the steering oar without a rudder in the Mediterranean, Leo Block (2003) writes:

A single sail tends to turn a vessel in an upwind or downwind direction, and rudder action is required to steer a straight course. A steering oar was used at this time because the rudder had not yet been invented. With a single sail, a frequent movement of the steering oar was required to steer a straight course; this slowed down the vessel because a steering oar (or rudder) course correction acts like a brake. The second sail, located forward, could be trimmed to offset the turning tendency of the main sail and minimize the need for course corrections by the steering oar, which would have substantially improved sail performance.

The steering oar or steering board is an oversized oar or board to control the direction of a ship or other watercraft prior to the invention of the rudder. It is normally attached to the starboard side in larger vessels, though in smaller ones it is rarely, if ever, attached.

Rowing oars set aside for steering appeared on large Egyptian vessels long before the time of Menes (3100 BC). In the Old Kingdom (2686 BC-2134 BC) as many as five steering oars are found on each side of passenger boats. The tiller, at first a small pin run through the stock of the steering oar, can be traced to the fifth dynasty (2504–2347 BC). Both the tiller and the introduction of an upright steering post abaft reduced the usual number of necessary steering oars to one each side. Single steering oars put on the stern can be found in a number of tomb models of the time, particularly during the Middle Kingdom when tomb reliefs suggests them commonly employed in Nile navigation. The first literary reference appears in the works of the Greek historian Herodotus (484-424 BC), who had spent several months in Egypt: "They make one rudder, and this is thrust through the keel", probably meaning the crotch at the end of the keel (see right pic "Tomb of Menna"). In Iran, oars mounted on the side of ships for steering are documented from the 3rd millennium BCE in artwork, wooden models, and even remnants of actual boats.

Roman navigation used sexillie quarter steering oars that went in the Mediterranean through a long period of constant refinement and improvement, so that by Roman times ancient vessels reached extraordinary sizes. The strength of the steering oar lay in its combination of effectiveness, adaptability and simpleness. Roman quarter steering oar mounting systems survived mostly intact through the medieval period. By the first half of the 1st century AD, steering gear mounted on the stern were also quite common in Roman river and harbour craft as proved from reliefs and archaeological finds (Zwammderdam, Woerden 7). A tomb plaque of Hadrianic age shows a harbour tug boat in Ostia with a long stern-mounted oar for better leverage. The boat already featured a spritsail, adding to the mobility of the harbour vessel. Further attested Roman uses of stern-mounted steering oars includes barges under tow, transport ships for wine casks, and diverse other ship types. Also, the well-known Zwammerdam find, a large river barge at the mouth of the Rhine, featured a large steering gear mounted on the stern. According to new research, the advanced Nemi ships, the palace barges of emperor Caligula (37-41 AD), may have featured 14 m long rudders.

Paul Johnstone and Sean McGrail state that the Chinese invented the "median, vertical and axial" sternpost-mounted rudder, and that such a kind of rudder preceded the pintle-and-gudgeon rudder found in the West by roughly a millennium.

A new steering mechanism is first depicted on a Chandraketugarh (West Bengal) seal dated 1st-3rd century AD of a ship named Indra of the ocean (Jaladhisakra) which indicates that it was a sea bound vessel.