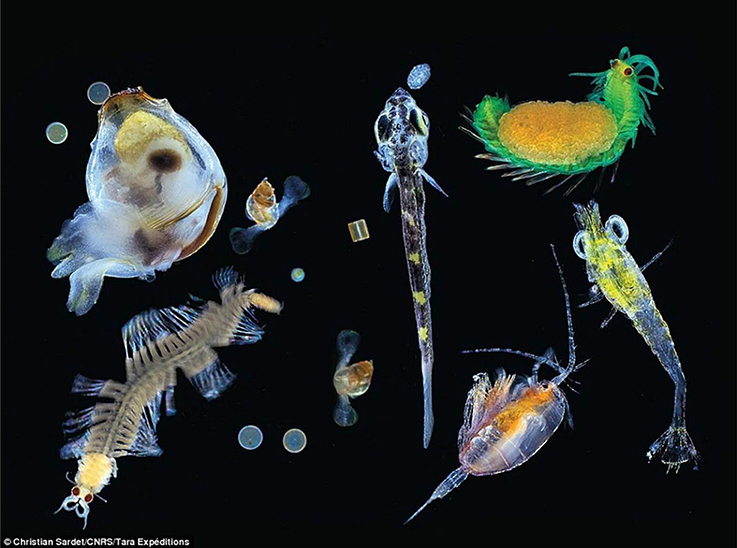 Plankton are the diverse collection of organisms found in water (or air) that are unable to propel themselves against a current (or wind). The individual organisms constituting plankton are called plankters. In the ocean, they provide a crucial source of food to many small and large aquatic organisms, such as bivalves, fish and whales. Marine plankton includes bacteria, archaea, algae, protozoa and drifting or floating animals that inhabit the saltwater of oceans and the brackish waters of estuaries. Freshwater plankton are similar to marine plankton, but are found in the freshwaters of lakes and rivers. Plankton are usually thought of as inhabiting water, but there are also airbourne versions, the aeroplankton, that live part of their lives drifting in the atmosphere. These include plant spores, pollen and wind-scattered seeds, as well as microrganisms swept into the air from terrestrial dust storms and oceanic plankton swept into the air by sea spray. Though many planktonic species are microscopic in size, ''plankton'' includes organisms over a wide range of sizes, including large organisms such as jellyfish. Plankton are defined by their ecological niche and level of motility rather than by any phylogenetic or taxonomic classification. Technically the term does not include organisms on the surface of the water, which are called ''pleuston''—or those that swim actively in the water, which are called ''nekton''.

The name ''plankton'' is derived from the Greek adjective πλαγκτός (), meaning ''errant'', and by extension, ''wanderer'' or ''drifter'', and was coined by Victor Hensen in 1887. While some forms are capable of independent movement and can swim hundreds of meters vertically in a single day (a behavior called diel vertical migration), their horizontal position is primarily determined by the surrounding water movement, and plankton typically flow with ocean currents. This is in contrast to nekton organisms, such as fish, squid and marine mammals, which can swim against the ambient flow and control their position in the environment. Within the plankton, holoplankton spend their entire life cycle as plankton (e.g. most algae, copepods, salps, and some jellyfish). By contrast, meroplankton are only planktic for part of their lives (usually the larval stage), and then graduate to either a nektic (swimming) or benthic (sea floor) existence. Examples of meroplankton include the larvae of sea urchins, starfish, crustaceans, marine worms, and most fish. The amount and distribution of plankton depends on available nutrients, the state of water and a large amount of other plankton. The study of plankton is termed planktology and a planktonic individual is referred to as a plankter. The adjective ''planktonic'' is widely used in both the scientific and popular literature, and is a generally accepted term. However, from the standpoint of prescriptive grammar, the less-commonly used ''planktic'' is more strictly the correct adjective. When deriving English words from their Greek or Latin roots, the gender-specific ending (in this case, "-on" which indicates the word is neuter) is normally dropped, using only the root of the word in the derivation.

Plankton are primarily divided into broad functional (or trophic level) groups: *Phytoplankton (from Greek ''phyton'', or plant), are autotrophic prokaryotic or eukaryotic algae that live near the water surface where there is sufficient light to support photosynthesis. Among the more important groups are the diatoms, cyanobacteria, dinoflagellates and coccolithophores. *Zooplankton (from Greek ''zoon'', or animal), are small protozoans or metazoans (e.g. crustaceans and other animals) that feed on other plankton. Some of the eggs and larvae of larger nektonic animals, such as fish, crustaceans, and annelids, are included here. *Mycoplankton include fungi and fungus-like organisms, which, like bacterioplankton, are also significant in remineralisation and nutrient cycling. *Bacterioplankton include bacteria and archaea, which play an important role in remineralising organic material down the water column (note that prokaryotic phytoplankton are also bacterioplankton). *Virioplankton are viruses. Viruses are more abundant in the plankton than bacteria and archaea, though much smaller.

*Mixotrophs. Plankton have traditionally been categorized as producer, consumer and recycler groups, but some plankton are able to benefit from more than just one trophic level. In this mixed trophic strategy—known as mixotrophy—organisms act as both producers and consumers, either at the same time or switching between modes of nutrition in response to ambient conditions. This makes it possible to use photosynthesis for growth when nutrients and light are abundant, but switching to eat phytoplankton, zooplankton or each other when growing conditions are poor. Mixotrophs are divided into two groups; constitutive mixotrophs, CMs, which are able to perform photosynthesis on their own, and non-constitutive mixotrophs, NCMs, which use phagocytosis to engulf phototrophic prey that are either kept alive inside the host cell which benefit from its photosynthesis, or they digest their prey except for the plastids which continues to perform photosynthesis (kleptoplasty). Recognition of the importance of mixotrophy as an ecological strategy is increasing, as well as the wider role this may play in marine biogeochemistry. Studies have shown that mixotrophs are much more important for the marine ecology than previously assumed, and comprise more than half of all microscopic plankton. Their presence act as a buffer that prevents the collapse of ecosystems during times with little to no light.

Plankton are also often described in terms of size. Usually the following divisions are used: :: However, some of these terms may be used with very different boundaries, especially on the larger end. The existence and importance of nano- and even smaller plankton was only discovered during the 1980s, but they are thought to make up the largest proportion of all plankton in number and diversity. The microplankton and smaller groups are microorganisms and operate at low Reynolds numbers, where the viscosity of water is more important than its mass or inertia.

Marine plankton includes bacteria, archaea, algae, protozoa and drifting or floating animals that inhabit the saltwater of oceans and the brackish waters of estuaries.

Freshwater plankton are similar to marine plankton, but are found in the freshwaters of lakes and rivers.

Aeroplankton are tiny lifeforms that float and drift in the air, carried by the current of the wind; they are the atmospheric analogue to oceanic plankton. Most of the living things that make up aeroplankton are very small to microscopic in size, and many can be difficult to identify because of their tiny size. Scientists can collect them for study in traps and sweep nets from aircraft, kites or balloons. Aeroplankton is made up of numerous microbes, including viruses, about 1000 different species of bacteria, around 40,000 varieties of fungi, and hundreds of species of protists, algae, mosses and liverworts that live some part of their life cycle as aeroplankton, often as spores, pollen, and wind-scattered seeds. Additionally, peripatetic microorganisms are swept into the air from terrestrial dust storms, and an even larger amount of airborne marine microorganisms are propelled high into the atmosphere in sea spray. Aeroplankton deposits hundreds of millions of airborne viruses and tens of millions of bacteria every day on every square meter around the planet.

Many animals live in terrestrial environments by thriving in transient often microscopic bodies of water and moisture, these include Rotifers and Gastrotrichs which lay resilient eggs capable of surviving years in dry environments, and some of which can go dormant themselves. Nematodes are usually microscopic with this lifestyle. Water Bears although only having lifespans of a few months, famously can enter suspended animation during dry or hostile conditions and survive for decades, this allows them to be ubiquitous in terrestrial environments despite needing water to grow and reproduce. Many microscopic crustacean groups like copepods and amphipods (of which Sandhoppers are members) and Seed Shrimp are known to go dormant when dry and live in transient bodies of water too 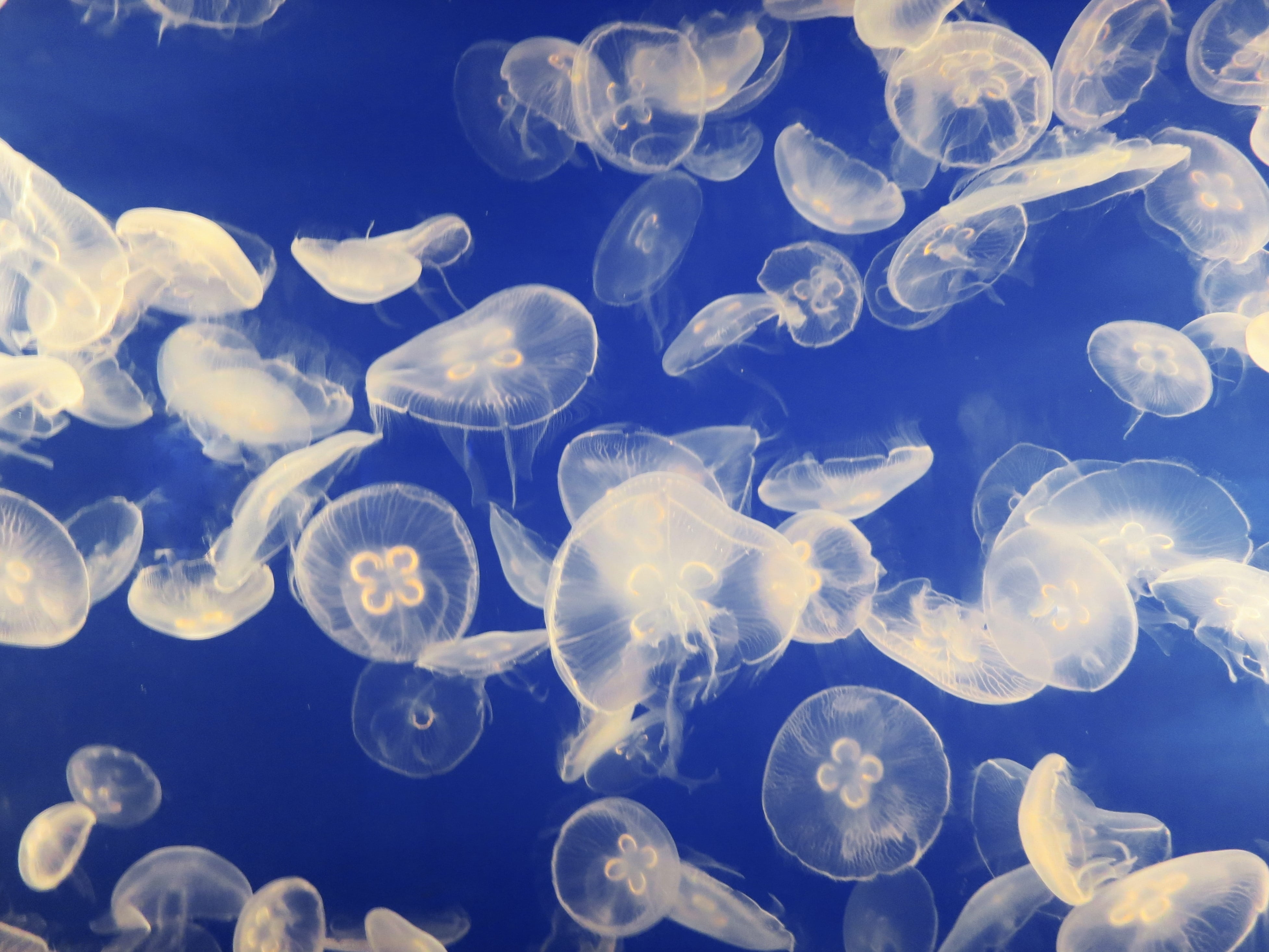 Ichthyoplankton are the eggs and larvae of fish. They are mostly found in the sunlit zone of the water column, less than 200 metres deep, which is sometimes called the epipelagic or photic zone. Ichthyoplankton are planktonic, meaning they cannot swim effectively under their own power, but must drift with the ocean currents. Fish eggs cannot swim at all, and are unambiguously planktonic. Early stage larvae swim poorly, but later stage larvae swim better and cease to be planktonic as they grow into juveniles. Fish larvae are part of the zooplankton that eat smaller plankton, while fish eggs carry their own food supply. Both eggs and larvae are themselves eaten by larger animals. Fish can produce high numbers of eggs which are often released into the open water column. Fish eggs typically have a diameter of about . The newly hatched young of oviparous fish are called larvae. They are usually poorly formed, carry a large yolk sac (for nourishment) and are very different in appearance from juvenile and adult specimens. The larval period in oviparous fish is relatively short (usually only several weeks), and larvae rapidly grow and change appearance and structure (a process termed metamorphosis) to become juveniles. During this transition larvae must switch from their yolk sac to feeding on zooplankton prey, a process which depends on typically inadequate zooplankton density, starving many larvae. In time fish larvae become able to swim against currents, at which point they cease to be plankton and become juvenile fish. 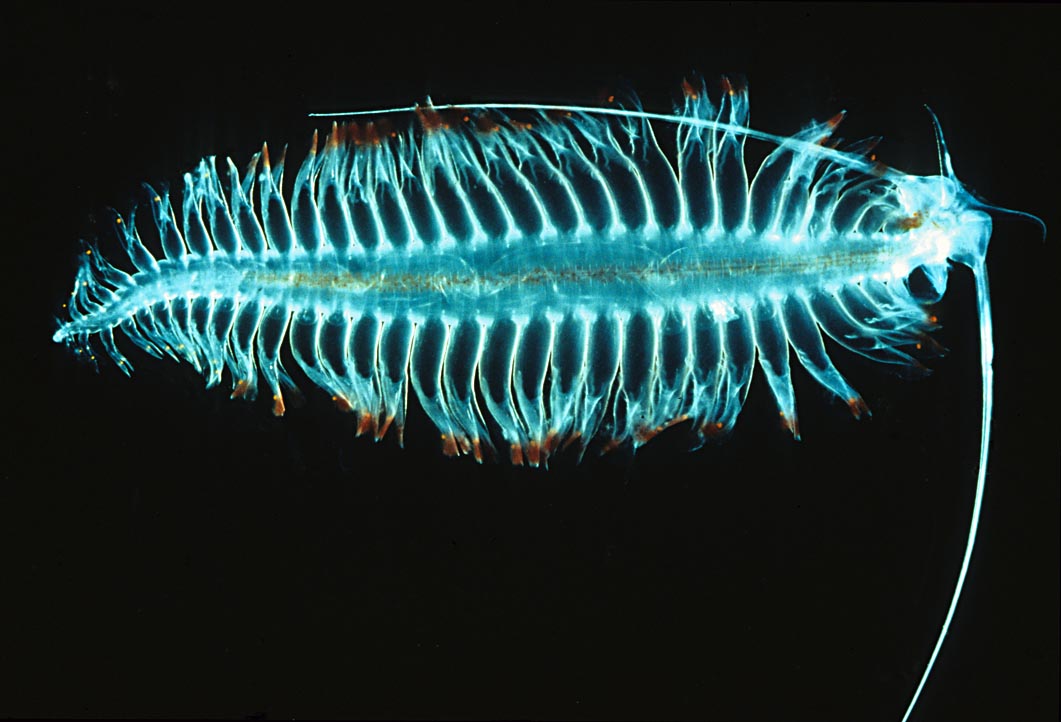 Meroplankton are a wide variety of aquatic organisms which have both planktonic and benthic stages in their life cycles. Much of the meroplankton consists of larval stages of larger organism. Meroplankton can be contrasted with holoplankton, which are planktonic organisms that stay in the pelagic zone as plankton throughout their entire life cycle. After a period of time in the plankton, many meroplankton graduate to the nekton or adopt a benthic (often sessile) lifestyle on the seafloor. The larval stages of benthic invertebrates make up a significant proportion of planktonic communities. The planktonic larval stage is particularly crucial to many benthic invertebrate in order to disperse their young. Depending on the particular species and the environmental conditions, larval or juvenile-stage meroplankton may remain in the pelagic zone for durations ranging from hour to months.

Pseudoplankton are organisms that attach themselves to planktonic organisms or other floating objects, such as drifting wood, buoyant shells of organisms such as ''Spirula'', or man-made flotsam. Examples include goose barnacles and the bryozoan ''Jellyella''. By themselves these animals cannot float, which contrasts them with true planktonic organisms, such as ''Velella'' and the Portuguese Man o' War, which are buoyant. Pseudoplankton are often found in the guts of filtering zooplankters.

Tychoplankton are organisms, such as free-living or attached benthic organisms and other non-planktonic organisms, that are carried into the plankton through a disturbance of their benthic habitat, or by winds and currents. This can occur by direct turbulence or by disruption of the substrate and subsequent entrainment in the water column.