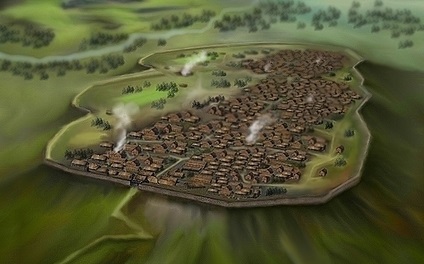 An ''oppidum'' (plural ''oppida'') is a large fortified Iron Age settlement. Oppida are associated with the Celtic late La Tène culture, emerging during the 2nd and 1st centuries BC, spread across Europe, stretching from Britain and Iberia in the west to the edge of the Hungarian plain in the east. They continued to be used until the Romans conquered Southern and Western Europe. In regions north of the rivers Danube and Rhine, such as most of Germania, where the populations remained independent from Rome, oppida continued to be used into the 1st century AD.

''Oppidum'' is a Latin word meaning the main settlement in any administrative area of ancient Rome, and applied more generally in Latin to smaller urban settlements than cities, equating to "town" in English (bearing in mind that ancient "cities" could be very small by modern standards). The word is derived from the earlier Latin ''ob-pedum'', "enclosed space", possibly from the Proto-Indo-European ''*pedóm-'', "occupied space" or "footprint". In his ''Commentarii de Bello Gallico'', Julius Caesar described the larger Celtic Iron Age settlements he encountered in Gaul during the Gallic Wars in 58 to 52 BC as ''oppida''. Although he did not explicitly define what features qualified a settlement to be called an ''oppidum'', the main requirements emerge. They were important economic sites, places where goods were produced, stored and traded, and sometimes Roman merchants had settled and the Roman legions could obtain supplies. They were also political centres, the seat of authorities who made decisions that affected large numbers of people, such as the appointment of Vercingetorix as head of the Gallic revolt in 52 BC. Caesar named 28 oppida. By 2011, only 21 of these had been positively identified by historians and archaeologists: either there was a traceable similarity between the Latin and the modern name of the locality (e.g. Civitas Aurelianorum-Orléans), or excavations had provided the necessary evidence (e.g. Alesia). Most of the places that Caesar called oppida were city-sized fortified settlements. However, Geneva, for example, was referred to as an oppidum, but no fortifications dating to this period have yet been discovered there. Caesar also refers to 20 oppida of the Bituriges and 12 of the Helvetii, twice the number of fortified settlements of these groups known today. That implies that Caesar likely counted some unfortified settlements as oppida. A similar ambiguity is in evidence in writing by the Roman historian Livy, who also used the word for both fortified and unfortified settlements. In his work ''Geographia'', Ptolemy listed the coordinates of many Celtic settlements. However, research has shown many of the localisations of Ptolemy to be erroneous, making the identification of any modern location with the names he listed highly uncertain and speculative. An exception to that is the oppidum of ''Brenodurum'' at Bern, which was confirmed by an archaeological discovery. 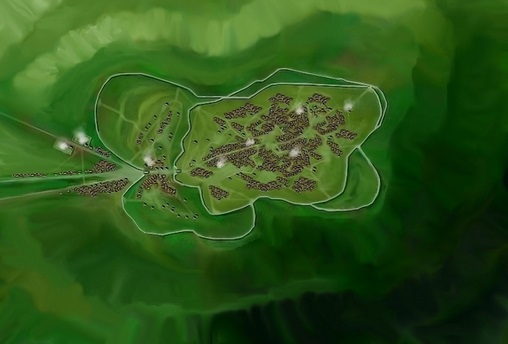 In archaeology and prehistory, the term ''oppida'' now refers to a category of settlement; it was first used in that sense by Paul Reinecke, and in reference to Bibracte, Manching, and Závist. In particular, Dehn suggested defining an oppidum by four criteria: # Size: The settlement has to have a minimum size, defined by Dehn as . # Topography: Most oppida are situated on heights, but some are located on flat areas of land. # Fortification: The settlement is surrounded by a (ideally uninterrupted) wall, usually consisting of three elements: a facade of stone, a wooden construction and an earthen rampart at the back. Gates are usually pincer gates. # Chronology: The settlement dates from the late Iron Age: the last two centuries BC. In current usage, most definitions of ''oppida'' emphasise the presence of fortifications so they are different from undefended farms or settlements and from urban characteristics, marking them as separate from hill forts. They could be referred to as "the first cities north of the Alps". The period of 2nd and 1st centuries BC places them in the period known as La Tène. A notional minimum size of has often been suggested, but that is flexible and fortified sites as small as have been described as oppida. However, the term is not always rigorously used, and it has been used to refer to any hill fort or circular rampart dating from the La Tène period. One of the effects of the inconsistency in definitions is that it is uncertain how many oppida were built. In European archaeology, the term 'oppida' is also used more widely to characterize any fortified prehistoric settlement. For example, significantly older hill-top structures like the one at Glauberg (6th or 5th century BC) have been called oppida. Such wider use of the term is, for example, common in the Iberian archaeology; in the descriptions of the Castro culture it is commonly used to refer to the settlements going back to the 9th century BC. The Spanish word 'castro', also used in English, means a walled settlement or hill fort, and this word is often used interchangeably with 'oppidum' by archaeologists.

According to prehistorian John Collis oppida extend as far east as the Hungarian plain where other settlement types take over. Central Spain has sites similar to oppida, but while they share features such as size and defensive ramparts the interior was arranged differently. Oppida feature a wide variety of internal structures, from continuous rows of dwellings (Bibracte) to more widely spaced individual estates (Manching). Some oppida had internal layouts resembling the ''insulae'' of Roman cities (Variscourt). Little is known, however, about the purpose of any public buildings.

The main features of the oppida are the walls and gates, the spacious layout, and usually a commanding view of the surrounding area. The major difference with earlier structures was their much larger size. Earlier hill forts were mostly just a few hectares in area, whilst oppida could encompass several dozen or even hundreds of hectares. They also played a role in displaying the power and wealth of the local inhabitants and as a line of demarcation between the town and the countryside. According to Jane McIntosh, the "impressive ramparts with elaborate gateways ... were probably as much for show and for controlling the movement of people and goods as for defense". Size and construction varied considerably. Typically oppida in Bohemia and Bavaria were much larger than those found in the north and west of France. Typically oppida in Britain are small, but there is a group of large oppida in the south east; though oppida are uncommon in northern Britain, Stanwick stands out as an unusual example as it covers . Dry stone walls supported by a bank of earth, called Kelheim ramparts, were characteristic of oppida in central Europe. To the east, timbers were often used to support the earthen ramparts, called ''Pfostenschlitzmauer'' (post slot wall) or "Preist-type wall". In western Europe, especially Gaul, the ''murus gallicus'', a timber frame nailed together, was the dominant form of rampart construction. Dump ramparts, that is earth unsupported by timber, were common in Britain and were later adopted in France. They have been found in particular in the north-west and central regions of France and were combined with wide moats ("Type Fécamp"). Oppida can be divided into two broad groups, those around the Mediterranean coast and those further inland. The latter group were larger, more varied, and spaced further apart. In Britain the oppidum of ''Camulodunon'' (modern Colchester, built between the 1st century BC and the 1st century AD), tribal capital of the Trinovantes and at times the Catuvellauni, made use of natural defences enhanced with earthworks to protect itself. The site was protected by two rivers on three of its sides, with the River Colne bounding the site to the north and east, and the Roman River forming the southern boundary; the extensive bank and ditch earthworks topped with palisades were constructed to close off the open western gap between these two river valleys. These earthworks are considered the most extensive of their kind in Britain, and together with the two rivers enclosed the high status farmsteads, burial grounds, religious sites, industrial areas, river port and coin mint of the Trinovantes. 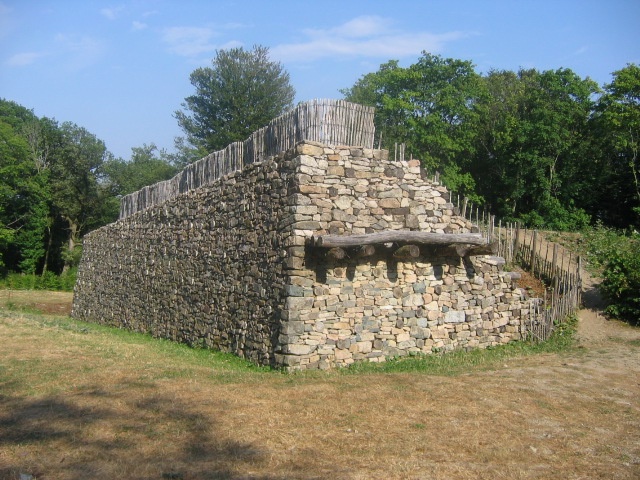 Prehistoric Europe saw a growing population. According to Jane McIntosh, in about 5,000 BC during the Neolithic between 2 million and 5 million people lived in Europe; in the late (pre-Roman) Iron Age (2nd and 1st centuries BC) it had an estimated population of around 15 to 30 million. Outside Greece and Italy, which were more densely populated, the vast majority of settlements in the Iron Age were small, with perhaps no more than 50 inhabitants. While hill forts could accommodate up to 1,000 people, oppida in the late Iron Age could reach as large as 10,000 inhabitants. Oppida originated in the 2nd and 1st centuries BC. Most were built on fresh sites, usually on an elevated position. Such a location would have allowed the settlement to dominate nearby trade routes and may also have been important as a symbol of control of the area.