Onsite sewage facilities (OSSF), also called septic systems, are wastewater systems designed to treat and dispose of effluent on the same property that produces the wastewater, in areas not served by public sewage infrastructure. A septic tank and drainfield combination is a fairly common type of on-site sewage facility in the Western world. OSSFs account for approximately 25% of all domestic wastewater treatment in the US. Onsite sewage facilities may also be based on small-scale aerobic and biofilter units, membrane bioreactors or sequencing batch reactors. These can be thought of as scaled down versions of municipal sewage treatment plants, and are also known as "package plants."

The primary mechanism of biological waste recycling in the natural environment is performed by other organisms such as animals, insects, soil microorganisms, plants, and fungi, which consume all available nutrients in the waste, leaving behind fully decomposed solids that become part of topsoil, and pure drinking water that has been stripped of everything that can possibly be consumed and utilized. This natural biological purification requires time and space to process wastes. In virtually all engineered onsite sewage facilities, recycling and decomposition by natural organisms is still the primary mechanism of sewage disposal. Giving the organisms the time they need to decompose wastes is accomplished by establishing minimum sewage retention and settling times, and minimum liquid flow distances between sewage disposal sites and surface water or water wells.

It is normal for animals such as mice, rats, flies, and parasites to participate in the fully natural biological waste recycling process. Engineered facilities typically attempt to exclude them to prevent out of control population explosions and infestation, and prevent spread of vermin and disease. Although the solids collected by onsite sewage facilities can potentially be used as compost to build topsoil, these solids are often incompletely decomposed due to either a lack of onsite storage space to wait for decomposition (municipal facilities), or because the solids are being stacked in a layered structure of new waste solids on top of previously decomposed solids (septic tanks and outhouses). Due to the incomplete state of decomposition, when removed from an onsite sewage facility, these solids are typically referred to as ''sludge'' rather than ''compost'', and have powerful offensive odors arising from the microorganisms still consuming nutrients in the sludge. 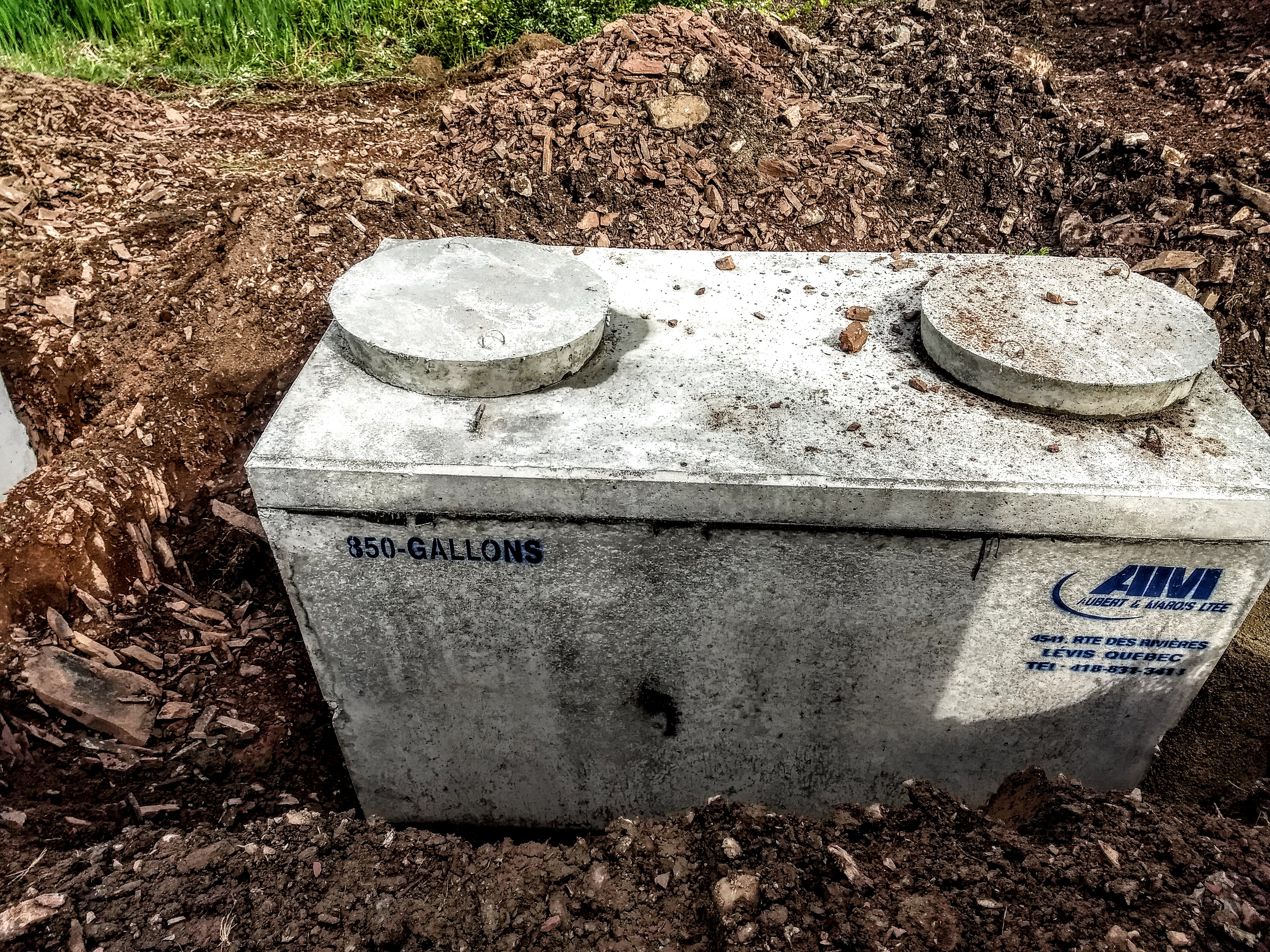 Engineered facilities that use water suspension to transport solids (private septic systems and municipal facilities) typically form a floating layer in their primary settling tank, consisting of low-density liquids such as oils, buoyant solids, and soap foam. This is referred to as ''scum'' and is slowly decomposed by microorganisms, eventually falling to the bottom of the settling tank as part of the sludge. When private septic tanks are emptied of solids, the tank is typically vacuumed empty and the incompletely digested scum is added to the incompletely digested sludge, further adding to its aroma and bioactivity. If left completely undisturbed and exposed to the open air through a vent, the sludge and scum in a settling tank will eventually be turned completely into low-odor compost. By building two tanks side by side, and diverting sewage between them, one tank can be allowed to rest while the other is in use, and the resting tank can be safely and easily cleaned out by hand before it is used again. This has been proposed as a solution for onsite sewage facilities in subsistence agriculture economies where hand labor is the most abundant. Although human body waste is no different from the waste of any other animal, municipal facilities may be required to bury the collected solids in landfills, due to the risk of toxic contaminants placed into the shared communal sewage system, by humans unaware of the harm they are causing. Municipal facilities may also collect runoff from roadways, which contains traces of all the various chemicals used in vehicles such as brake fluid and engine oil, and those used in melting ice and snow. Private septic systems typically do not experience these issues, as the homeowner is directly aware that they must not pour toxic chemicals down the drain. 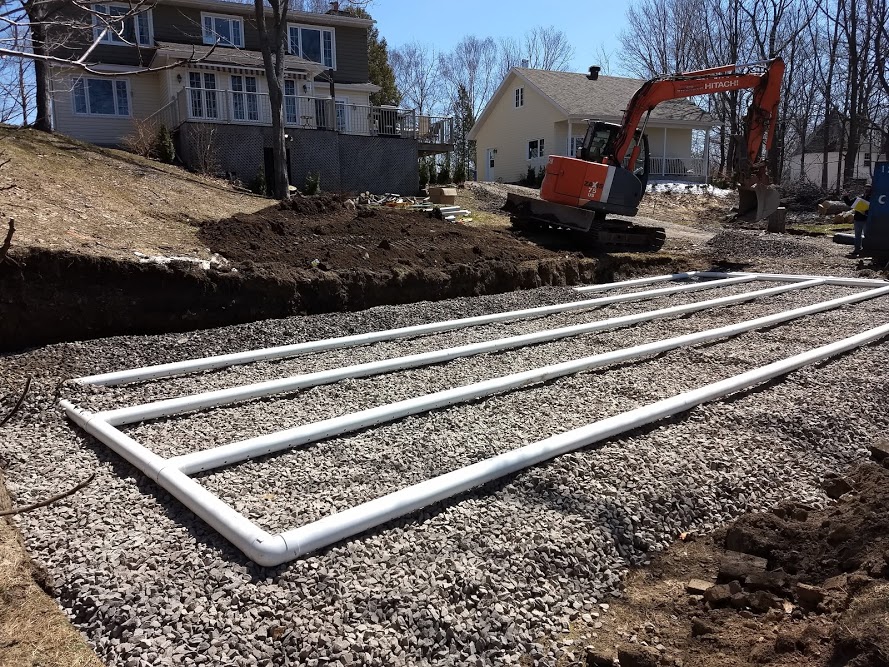 Performance requirements can be expressed as numeric criteria (e.g., pollutant concentration or mass loading limits) or narrative criteria (e.g., no odors or visible sheen) and are based on the assimilative capacity of regional ground water or surface waters, water quality objectives, and public health goals. Wastewater flow and pollutant content help define system design and size and can be estimated by comparing the size and type of facility with measured effluent outputs from similar, existing facilities. Site evaluations integrate detailed analyses of regional hydrology, geology, and water resources with site specific characterization of soils, slopes, structures, property lines, and other site features to further define system design requirements and determine the physical placement of system components. Most of the alternative treatment technologies applied today treat wastes after they exit the septic tank; the tank retains settleable solids, grease, and oils and provides an environment for partial digestion of settled organic wastes. Post-tank treatment can include aerobic (with oxygen) or anaerobic (with no or low oxygen) biological treatment in suspended or fixed-film reactors, physical/chemical treatment, soil infiltration, fixed-media filtration, and/or disinfection. The application and sizing of treatment units based on these technologies are defined by performance requirements, wastewater characteristics, and site conditions.

Usage and norms by country

Under Canadian federalism, environment is a shared power between federal and provincial governments. However, waste water management mostly falls within provincial, territorial and municipal jurisdiction, while the federal government has jurisdiction over wastewater on federal land and on First Nations reserves. Each province and territory has its own norms and regulations concerning the design and installation of onsite sewage facilities, such as whether a permit is required to do so and how to obtain it, the type, size and location of the system (usually according to on-site soil characteristics and other factors), etc. :

The potential market volume of on-site treatment is suggested to be about 35 million population equivalents for Europe.

In the United States, on site sewage facilities collect, treat, and release about of treated effluent per day from an estimated 26 million homes, businesses, and recreational facilities nationwide (U.S. Census Bureau, 1997). Recognition of the impacts of onsite systems on ground water and surface water quality (e.g., nitrate and bacteria contamination, nutrient inputs to surface waters) has increased interest in optimizing the systems' performance. Public health and environmental protection officials now acknowledge that onsite systems are not just temporary installations that will be replaced eventually by centralized sewage treatment services, but permanent approaches to treating wastewater for release and reuse in the environment. Onsite systems are recognized as viable, low-cost, long-term, decentralized approaches to wastewater treatment if they are planned, designed, installed, operated, and maintained properly (USEPA, 1997). NOTE: In addition to existing state and local oversight, decentralized wastewater treatment systems that serve more than 20 people might become subject to regulation under the USEPA's Underground Injection Control Program, although EPA has proposed not to include them (64FR22971:5/7/01). Although some onsite wastewater management programs have functioned successfully in the past, problems persist. Most current onsite regulatory programs focus on permitting and installation. Few programs address onsite system operation and maintenance, resulting in failures that lead to unnecessary costs and risks to public health and water resources. Moreover, the lack of coordination among agencies that oversee land use planning, zoning, development, water resource protection, public health initiatives, and onsite systems causes problems that could be prevented through a more cooperative approach. Effective management of onsite systems requires rigorous planning, design, installation, operation, maintenance, monitoring, and controls.

State and tribal agencies report that onsite septic systems currently constitute the third most common source of groundwater pollution and that these systems have failed because of inappropriate siting or design or inadequate long-term maintenance (USEPA, 1996a). In the 1996 Clean Water Needs Survey (USEPA, 1996b), states and tribes also identified more than 500 communities as having failed septic systems that have caused public health problems. The discharge of partially treated sewage from malfunctioning onsite systems was identified as a principal or contributing source of degradation in 32 percent of all harvest-limited shellfish growing areas. Onsite wastewater treatment systems have also contributed to an overabundance of nutrients in ponds, lakes, and coastal estuaries, leading to the excessive growth of algae and other nuisance aquatic plants (USEPA, 1996b). In addition, onsite systems contribute to contamination of drinking water sources. USEPA estimates that 168,000 viral illnesses and 34,000 bacterial illnesses occur each year as a result of consumption of drinking water from systems that rely on improperly treated ground water. Malfunctioning septic systems have been identified as one potential source of ground water contamination (USEPA, 2000).