A Numbered Air Force (NAF) is a type of organization in the United States Air Force that is subordinate to a Major Command (MAJCOM) and has assigned to it operational units such as wings, squadrons, and groups. A Component Numbered Air Force (C-NAF) has the additional role as an Air Force Component Command exercising command and control over air and space forces supporting a Unified Combatant Command. Unlike MAJCOMs, which have a management role, a NAF is a tactical organization with an operational focus, and does not have the same functional staff as a MAJCOM. Numbered air forces are typically commanded by a major general or a lieutenant general. Numeric designations for Numbered Air Forces are written in full using ordinal words (e.g., Eighth Air Force), while cardinal numerals are used in abbreviations (e.g., 8 AF). Units directly subordinate to a NAF were traditionally numbered 6XX (where XX is the NAF number). For example, the 618th Air and Space Operations Center (Tanker Airlift Control Center) is a unit subordinate to the Eighteenth Air Force. This is no longer completely accurate, due to regular reorganization of Wings and Numbered Air Forces. 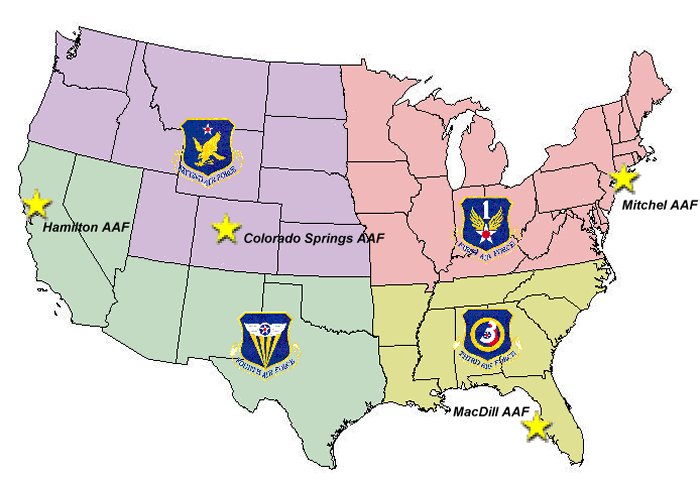 The table below lists current and historical numbered air forces of the US Air Force, their C-NAF designation (if applicable), their current shield and station, and the major command (MAJCOM) to which they are currently assigned. Note that the lineage of some numbered air forces is continued by non-NAF organizations (e.g., the 15th Expeditionary Mobility Task Force continues the lineage of the Fifteenth Air Force). Boldface indicates a NAF or C-NAF that is currently active.

* Organizational structure and hierarchy of the United States Air Force